Pediatric intertrochanteric fractures don’t occur usually, resulting from high-energy trauma. Historically, these injuries were treated conservatively with casting, but complications such as osteonecrosis, growth arrest, and coxavara were higher when treated with conservative methods such as casting. Hence a good anatomical reduction with internal fixation within a day from the time of injury has become primary objective in treating these injuries.

Pediatric intertrochanteric fracture classification is given by Delbets (Figure 1). 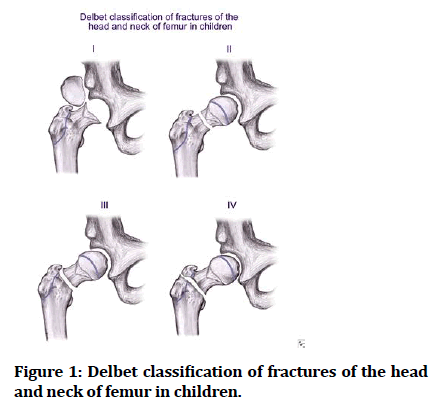 Figure 1: Delbet classification of fractures of the head and neck of femur in children.

The Delbet classification of hip fractures in children and adolescents.

A seven and half Y/O girl came to ER with complaints of pain and swelling in her left hip, unable to weight bear and walk following trauma (fell down on her left side as she was pushed by other kids while playing). Child had previous h/o of trauma (fell down from her bed ) 5 years back injured her left hip for which she was treated with hip spica for a month , she has been walking with a limp since then. On examination–tenderness and swelling over the proximal 1/3rd of left thigh, restricted ROM of left hip joint. Distal pulses felt, No distal neurovascular defict.

Patient in supine position on fracture table, fracture reduced under C-arm guidance. Under GA, under sterile aseptic precautions parts prepared and draped. An incision of 10 cms made starting from vastus ridge, extending distally to the femoral shaft. Skin and subcutaneous tissue incised and retracted. Iliotibial band incised and retracted, Vastus laterals incised and retracted. Fracture site visualized. Guide wire inserted 2cms below the Greater trochanter into the femoral head using angle guide under C-arm guidance. Triple reaming was done; a lag screw of size 55mm was inserted. A 150 degree 5 holes barrel plate attached to the screw and fixed with 5 cortical screws. A compression screw was inserted, thorough wound wash was given, and DT kept in-situ, wound closed in layers. Sterile dressing was done (Figures 3and Figure 4). Pediatric intertrochanteric fractures are not very common and it occurs as a result of high energy traumas or they occur following any pathology. Proper history should be elicited as in case of absence any trauma the underlying bone pathology should be evaluated. Numerous surgical options have been proposed and studied for pediatric intertrochanteric fractures (i.e. DHS, IMIL nailing).

Delbet type 4 IT fractures only accounts for twelve percent of hip fractures in children.

Usually these pediatric fractures are associated with no other complications except coxavara and non-union. Incidence of coxavara is around 20-30% but the use of internal fixation has reduced the complications. Delbets type IV in pediatric age group can be treated without fixation with spica cast for 3 months. Failure to maintain reduction with cast will require fixation, displaced type IV fractures will also require fixation.

Around twenty eight % of pediatric hip fractures are at rist of physical arrest. There is a chance of osteonecrosis and physical growth arrest with internal fixation devices, thus shortening due to growth arrest is insignificant except in very young children.

Intertrochanteric fractures usually occurs from high energy trauma and in this case the patient being seven and half year old kid, dynamic hip screw fixation is the best surgical management for better functional outcome of the patient and to prevent complications like osteonecrosis, coxa vara, premature physical fusion.