The Sedation reduces the postoperative recall of intra operative events. In the present study, total of 60 cases were included ; of which 30 were in group D for whom sedation with inj.Dexmedetomidine was given intravenously after neuraxial blockad e, and 30 in group. A significant decrease m pulse rate and mean arterial blood pressure (MAP) were observed .when compared with baseline m both groups throughout the surgery but the fall in pulse rate and MAP was greater with Dexmedetomidine infusion up to 45 minutes after spinal anaesthesia when compared with Midazolam Dexmedetomidine in Group D showed a better grade of Ramsay's Sedation score compared to inj. Midazolam in Group M. Dexmedetomidine for sedation was safe and feasible compared to Midazolam..

Neuraxial Anaesthesia 1s a unique technique to provide sensory and motor blockade in the large part of the body. Usually, without any additive, one can achieve 60-90 minutes of anaesthesia with a spinal block. Nowadays, anaesthetists are fortunate enough to have agents that can be used either intrathecally or intravenously to enhance the efficacy and duration of the block. They are named Adjuvants. Some of the Adjuvants that were previously used are Epinephrine, Magnesium Sulphate, Fentanyl, Midazolam, Clonidine, Dexmedetomidine activates the central nervous system and decreases plasma catecholamine level with stimulation of alpha 2 adrenoceptors in post-synaptic site, resulting in decrease in heart rate and blood pressure, in addition to sedation and anxiolysis. It was demonstrated to decrease pam and catecholamine [1].

Neuraxial anaesthesia is a unique technique to provide sensory and motor blockade in the body. Dexmedetomidine activates the central nervous system and decreases plasma catecholamine level with stimulation of alpha2 adrenoreceptors in post-synaptic site, resulting in decrease in heart rate and blood pressure, added to sedation and anxiolysis [2].

Midazolam which is a short-acting water-soluble form of benzodiazepine, is commonly used for premedication m order to perform amnes1a, sedation and to reduce perioperative anxiety. This effect depends on the binding to the gamma ammo butyrate receptors (GABA) at benzodiazepine site. This study is to compare the hemodynamic parameters, respiratory parameters and sedative effect of Intravenous Dexmedetomidine and Intravenous Midazolam [3].

This study is to compare the hemodynamic parameters, respiratory parameters and sedative effect of Intravenous Dexmedetomidine and Intravenous Midazolam.

This study was done to compare intravenous Dexmedetomidine and intravenous Midazolam for sedation in patients under Neuraxial Anaesthesia. It was a randomized study. This study was approved by the Institutional Ethical Committee. 60 patients were posted for surgenes at Sree Balaji Medical College and Hospital, Chennai, and were studied during June 2016 - September 2017.

Inclusion Criteria: The ASA I, II & III patients. Age between 25-65 yrs. weighing 40-90 kg of both Genders. Patients undergoing electivesurgeries with Neuraxial. Anaesthesia with duration of 1 to 2 hrs.

Patients were randomly divided into two groups as per the drug chosen for intraoperative sedation (Group D &M). The patients of group D were give n. Dexmedetomidine (1mcg/kg). Group M were injected with 0.01to 0.1 mg /kg, after which all the parameters were recorded.

Some factors influencing stability are:

The thickness of soft tissue at site of insertion must also be taken into account, along with a bone support of 5-6mm, during the selection of mini implant length. The ideal length of a mini implant is 9 mm, as this is thought to cause less stress on the surrounding bone than shorter mini implants and has less risk of damage to neighbouring anatomical structures than longer mini implants. From a clinical standpoint, a mini implant of 4-6 mm can be inserted into the majority of intraoral sites.

The diameter of the mini implant is directly proportional to the primary stability of the implant. The larger surface area allows for the force to be distributed, thereby reducing the pressure on the bone at insertion site.

Biomechanical yield, implantation success and fracture resistance are most influenced by diameter rather than length of implant. Stable results have been observed in implants of diameter 1.5-2.3 mm in maxilla and mandible & a significant loss of anchorage has been observed when mini implants with diameters of less than 1.2 mm were used. The ideal diameter is probably between 1.3 and 1.5 mm.

there is a risk of unwanted root contact when mini implants of diameters greater than 2 mm are used, as the mean inter- radicular space is generally between 2.5 mm and 3.5 mm.17The mini implants with a 1.3 mm diameter have shown a success rate of 88.6%, which is not particularly high but needs to be weighed against the lesser risk of iatrogenic damage [4].

Ramsay's Sedation score m patients who received Dexmedetomidine was of higher grade than those who received Midazolam. Among the cases , 67 % did not have major complicatio ns , 13 % had dizzines s, 10 %had vomit and another 10 % had nausea in the Group D. In the Group M, 70% had no complaints and remaining had nausea (fig.1). 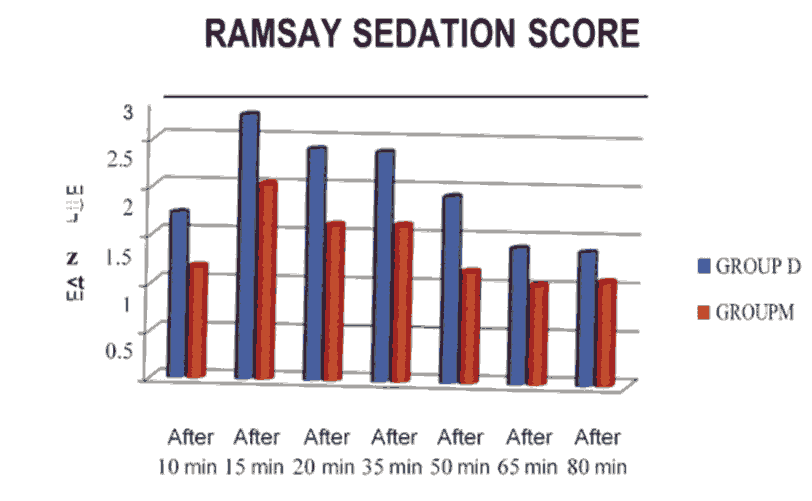 A significant decrease m pulse rate and mean arterialblood pressure (MAP) were observed when compared with baseline m both groups throughout the surgery but the fall in pulse rate and MAP was greater with Dexmedetomidine infusion upto 45 minutes after spinal anaesthesia when compared with Midazolam. With the data obtained, there was a statistically significant rate of decrease in pulse rate and mean blood pressure in Group D compared to Group M ,similar results were seen in kohrs et al[4]. There was also significant increase in the grade of Ramsay's Sedation score in group D compared to M. Dexmedetomidine had a better satisfactory sedation compared to Midazolam.


Citation: U. Juvairiya Banu A Comparison of IV Dexmedetomidine and Midazolam for Sedation in Patients under Neuraxial Anaesthesia, J Res Med Dent Sci, 2021, 9(11): 1 - 4