A Comprehensive Study of Intestinal Obstruction

The commonest cause of intestinal obstruction in the adults in this study series was obstructed Hernia (42%) followed by postoperative adhesions (30%). Tenderness, guarding, rigidity, rebound tenderness and shock are the cardinal feature of strangulated obstruction. The second most common type of intestinal obstruction was due to postoperative adhesions. Salient features were pain. Postoperative adhesions constituted about 30% of the total cases studied. Volvulus of the sigmoid was 4% in this series, all the cases were undergone laparotomy due to failure in the recovery of symptoms. In all cases where there was vascular compromise, resection and anastomosis was done. Malignancy of the large bowel was seen in 7 cases constituting 14% of cases. 65% of the cases diagnosed as malignancy were in the age group 35 -75 years. Of these 2 cases were managed with Hartman’s procedure and remaining cases was managed with transverse loop colostomy Most of the deaths occurred in malignancy. Although pulmonary tuberculosis more prevalent in India due to advent use of antitubercular drugs incidence of abdominal tuberculosis is becoming less. In our study incidence of ileocaecal tuberculosis was 4% and both were managed with resection and anastomosis.

Bowel obstruction remains one of the most common intra-abdominal problems faced by general surgeons in their practice whether caused by hernia, neoplasm, adhesions or related to biochemical disturbances intestinal obstruction of either the small or large bowel continues to be a major cause of morbidity and mortality [1]. They account for 12% to 16% of surgical admissions for acute abdominal complaints. Manifestations of acute intestinal obstruction can range from a good appearance with only slight abdominal discomfort and distension to a state of hypovolemic or septic shock (or both) requiring an emergency operation.

To analyse the etiology, management, and outcome of patents with intestinal obstruction [2]. The death due to acute intestinal obstruction is decreasing with better understanding of pathophysiology, improvement in diagnostic techniques, fluid, and electrolyte correction, much potent anti-microbials and knowledge of intensive care. Most of the mortalities occur in elderly individuals who seek late treatment and associated pre-existing diseases like, diabetes mellitus, cardiac diseases, or respiratory disease. Early diagnosis of obstruction, proper technique during surgery and intensive postoperative treatment carries a grateful result.

All patients diagnosed to have intestinal obstruction by clinical & radiological method and were intervened surgically irrespective of age group admitted in SBMCH were included in this study.

Patients with intestinal obstruction who were not able to comply with the treatment. Patients who were not consenting for the study. During hospital stay if the patient is decided to put on conservative management were excluded, for the want of definitive intra op diagnosis.

After the admission of the patient, clinical data were recorded as per Proforma. The diagnosis mainly based on clinical examination and often supported by hematological and radiological examinations.

The incidence of acute intestinal obstruction in all age group was studied from the cases admitted in Department of Surgery of Sree Balaji medical college and hospital during the period March 2017 to September 2018. The data regarding the symptoms and signs and laboratory investigations has been adopted in 50 cases during the study period.

During the period of 19 months, (studied 50 cases in 19 months) the total number of admissions in surgery were 14,236 cases. Of which 120 cases of acute intestinal obstruction were treated during these periods which comprise 0.95% of total number of admissions among these surgically treated cases, 50 cases were randomly selected for the present study. Total number of emergency surgeries done in the department of Surgery were 1,569 and acute intestinal obstruction in this group consisted of about 14.53% of these surgeries.

As per the below table and bar chart, the maximum incidence in the present study group is 51 -60 and 61-70 with 17 and 14 cases out of 50 cases (Table 1 and Figure 1). Male patients were more commonly affected when compared to female patients in the below table (Table 2 and Figure 2). Table 3 and Figure 3 represents socio-economic status. The most common cause of intestinal obstruction in our study was Obstructed hernia. The next common was Postoperative Adhesions. Other conditions include malignancy, tuberculosis, intussusception, volvulus, mesenteric ischemia in descending frequency (Table 6 and Figure 6). In our study of 50 cases as accordingly with the etiology the management and the surgical procedure was done as shown in the table and pie diagram, release of adhesion with hernioplasty done in 32% of the cases, release of adhesions only done in 30% cases & resection anastomosis in 18% of cases (Table 7 and Figure 7). In the present study group there were 5 cases of septicemia, 2 cases of respiratory tract infection and 2 cases of wound infection (Table 8 and Figure 8). 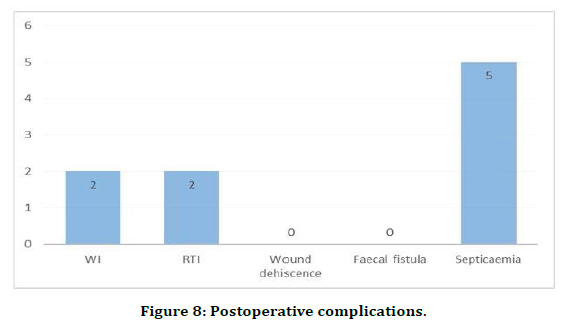 In the present study of 50 cases, about 7 patients died with the percentage of 14%. Most deaths due to complications like septicemia, peritonitis, respiratory infection (Table 9 and Figure 9). In the present study 7 persons died during postoperative period. The analysis of cause of death is shown below (Table 10). Table 11 explains the follow up status.

Table 10: Analysis of cause of death.

Obstructed hernia continues to be the most common surgical emergency. A total of 120 patients presented with features of acute intestinal obstruction. Among these 50 cases of operated cases were randomly selected for the present study.

The mass per abdomen on palpation is present in 24% of the total study, present mostly in Malignancy and ileocaecal tuberculosis. Visible peristalsis is present in 8% of the intestinal obstruction cases. The rectal examination did not reveal any abnormality except in 2 cases of intussusception (4%) and 7 cases of malignancy (14%) where in red currant Jelly stools and rectal growth were th e per rectal findings respectively.

Among the total study population 30% of the cases were having Anaemia otherwise the basic haematological investigation did not yield much statistical significance.

The Erect abdomen X-ray helps us in the diagnosis of intestinal obstruction as well as in differentiating the small bowel with large bowel obstruction. Multiple air fluid level can be seen in small multiple intestinal obstruction whereas only gas shadows seen in large bowel observation until the ileocaecal value is competent. Taneja et al. report shows 90% of cases with multiple air fluid level and Savage et al. reports 95% cases with significant findings. In the present study of the 50 cases 60% of X-ray shows multiple air blood levels. Contrast study of barium enema may help to locate the obstruction in the colon but in our study contrast study was not done.

The surgical management for the present study group includes resection anastomosis and herniorrhaphy for many of the cases of obstructed/strangulated hernia where the viability of the bowel was doubtful and also for ischemic bowel which is around 10%, release of constricting agents and hernioplasty was done in 32% of the obstructed/strangulated hernia cases, release of adhesions for postoperative adhesions was done in 30% cases. Two cases were managed with Hartman’s procedure and one case with transverse loop colostomy.

In the present study group out of 50 cases, complications like septicemia 5 cases, respiratory tract infection 2 cases, wound infection in two cases occurred. The complication of septicemia was more in the cases of malignancy and one case of mesenteric ischemia case where in there was already sepsis at the time of admission, and for these cases bowel surgeries were done which were unprepared. Two cases one with obstructed inguinal hernia and one with the case of carcinoma rectum, the patients had prior comorbid conditions of COPD were suffered from respiratory tract infection.

Frequency of mortality in our study is 14% i.e. 7 cases out of 50 cases. Among these 6 cases were due to malignancy and one due to mesenteric ischaemia. The mortality rate in the present study is much comparable to Ramachandran CS et al. study but it is more when compared to previous studies.

Out of 7 cases died, 6 cases were due to malignancy. As the malignancy was more in the aged group and the unprepared bowel surgeries done to the patient led to septicemic condition and resulted in death. Two patients were chronic smoker who suffered respiratory tract infection and died. Hence most of the deaths were due to malignancy which played significant role in the outcome of the disease. The mortality in intestinal obstruction is more in patients who develop strangulation and gangrene of the bowel, also who reached the hospital after 3 days. With all these, the age of the patient, general condition of the patient, duration of symptoms. Operative procedures carry a high role in progress [3-39].

Obstructed hernias are the common cause to produce intestinal obstruction. Clinical radiological and operative findings put together can diagnose the intestinal obstruction. Etiology – P value- 0.001(<0.05), hence the percentage of people with obstructed hernia, post op adhesions, volvulus, TB abdomen and intussusception have higher cure rates when diagnosed early, when compared with malignancy and mesenteric ischemia which has lower cure rates, and the difference is statistically significant. There is no statistically significant difference between cure rates and death rates due to various surgeries, probably because our sample size was small. P value 2.0(>0.05). Mortality is still significantly high in acute intestinal obstruction if the time of presentation to hospital is late, old age and if the diagnosis and intervention is delayed.