The purpose of the study is to evaluate the functional outcome of arthroscopic anterior cruciate ligament reconstruction using hamstring tendon (Gracilis and semitendinosus) autograft versus Quadriceps tendon graft in individuals with ACL injuries. Arthroscopic reconstruction of the injured ACL has become the gold standard. Open reconstruction of ACL which was done earlier is not practised nowadays due to the complications associated such as increased post op pain, stiffness, and a lengthy rehabilitation phase. The “ideal graft” for ACL reconstruction is still a topic of debate. The most used grafts are Quadriceps tendon graft, bone patellar tendon bone graft and hamstring graft. Many studies have demonstrated comparable functional outcomes for different grafts.

The knee joint is one of the body's most complicated joint. There is an increase in the occurrence of knee ligament injuries due to the ever- increasing road traffic accidents and increased involvement in sports activities. Knee joint has proximal femur bone distally tibia and fibula bone with ligaments and capsules, meniscus, and bursa. Important ligaments are Anterior cruciate ligament (ACL), Posterior cruciate Ligament (PCL), Medial collateral Ligament (MCL), Lateral collateral Ligament (LCL). The ACL together with other ligaments, capsule is the primary knee stabilizer and prevents anterior translation, and limits valgus and rotational stress to some extent.

The signs of knee instability, discomfort, and a decrease in joint function arise when an ACL injury occurs. Even though patients with less expected knee score can be treated with conservative treatment with intensive physiotherapy, bracing and lifestyle modification can be tried in symptomatic young active individuals, ACL reconstruction is necessary. Also ACL injuries are mostly associated with injury of meniscus which can to be addressed, else person can develop early onset of osteoarthritis of knee [1-19].

The common modes of injury of ACL are

Women are more susceptible to ACL injury than men. This may be due to

This includes inspection, palpation, measurements, and movements of the knee joint. Then the tests for cruciate ligaments, collateral ligaments and menisci are done which help in diagnosis and further plan of management.

This a prospective study conducted in Sree Balaji Medical College and Hospital, Chromepet, Chennai from august 2017 to September 2019. There were 50 patients included in our study of which 36 patients (72%) were male and 14 (28%) were female.36 patients were operated with hamstring graft and 14 were operated with quadriceps tendon graft. The patients were followed up for an average duration of 17.6 months with minimum follow up of 7 months and maximum follow up of 18 months.

All young and middle-aged patients presenting with unilateral knee complaints and history of trauma to the knee in the orthopaedic emergency and outpatient departments in Sree Balaji Medical College and Hospital, Chromepet, Chennai were evaluated by a thorough general and local examination, the uninjured knee was first examined in a stable patient and in the supine position to determine ligament excursions after which the affected knee was examined. Injuries to the associated structures were assessed by performing the following clinical tests.

Routine radiographs of both knees in standing position in anteroposterior view and lateral view of the affected knee were taken. MRI of the knee was done in all ACL torn cases for confirmation.

Pre-operative strength and range of movement of knee joint were measured and documented.

• Static and dynamic quadriceps and hamstrings exercise were taught to patients while awaiting surgery.

• All patients were enlightened on post–operative rehabilitation.

The technique of single bundle ACL reconstruction was done with one tibial tunnel and one femoral tunnel with their centres corresponding to the centre of the native ACL tibial and femoral attachment sites respectively. The femoral tunnel was made using the anteromedial portal thereby creating an anatomic femoral tunnel position. The graft was fixed at the tibial side using bioscrew / titanium interference screw or endobutton and at the femoral side using end button.

Before the harvesting of graft, diagnostic arthroscopy was done first. In 90 degrees of knee flexion, anterolateral port (viewing portal) is made using 11 blade at the level of inferior pole of patella just lateral to the patellar tendon.

A 3cm oblique skin incision is made starting 5 cm below the medial joint line and 1 cm medial to the tibial tuberosity. The oblique incision is preferred because it gives a wider exposure of pes anserinus and there is less chance of injury to the infrapatellar branch of the saphenous nerve. It is planned to do the graft harvest and tibial tunnel drilling through the same incision.

The knee is placed in 90 degrees of flexion and proximal dissection of the tendons were done using blunt dissection by fingers till the musculotendinous junction thereby releasing adhesions and accessory bands, while continuous traction was being applied through the threads.

The main band which connects the medial head of gastrocnemius is usually cut with the help of scissors. It is confirmed that as the tendon is pulled distally, there should be no dimpling posteriorly over the gastrocnemius.

The loop of the strand graft is tied to the posts in the graftmaster board and pretensioning is done by applying a pressure of about 15 pounds for around fifteen minutes (Figures 1 to Figure 4). All patients were subjected to post operative anteroposterior and lateral radiographs to determine the tunnel placement and position of endobutton and interference screw. Patients were followed at 6 weeks, 6 months and 1 year and functional outcomes assessed.

The International Knee Documentation 2000 score(IKDC) and Lysholm and Gillquist Knee Scoring Scale were used for evaluation of patients.

The Lysholm and Gillquist Knee Scoring Scale consists of eight parameters for evaluation. The parameters evaluated are

The individual parameters were allotted specific scores depending on the patient’s functional ability. The maximum possible knee score was.

Based on the outcome scores they were divided into Excellent, Good, Fair and Poor.

Fifty cases of arthroscopic ACL reconstruction were regularly followed for an average period of 17.6 months in Sree Balaji Medical College, Chrompet, Chennai. (From august 2017 to September 2017). 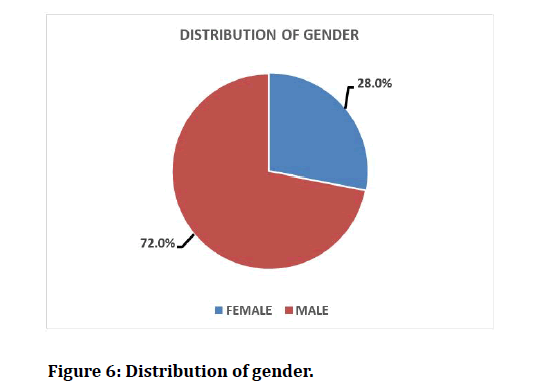 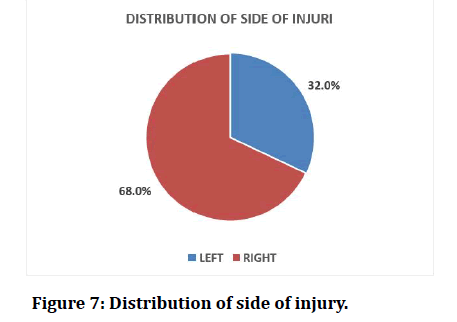 Figure 7: Distribution of side of injury. 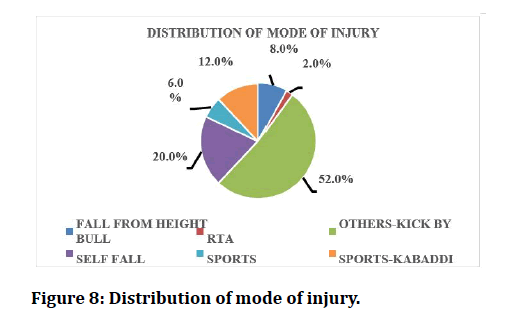 Figure 8: Distribution of mode of injury. Figure 14: Post-operative X-ray showing endobutton used for graft fixation on femoral side and interference screw on tibial side. 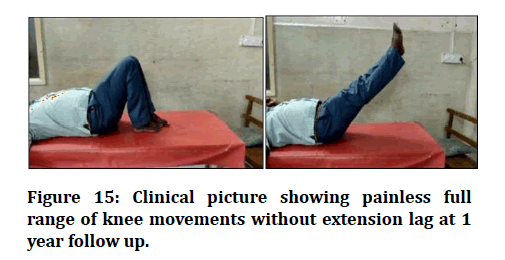 Arthroscopic reconstruction of the injured ACL has become the gold standard and is one of the most common procedures done in orthopaedics and thus it has been extensively studied and outcomes of ACL reconstruction have gained considerable attention.

The choice of graft is a topic of great debate in recent years. The various options include bone patellar tendon bone graft, hamstring auto- graft, quadriceps tendon, various synthetic grafts and allograft but the hamstring graft has been increasingly used in recent. The advantages of arthroscopic ACL reconstruction using hamstring graft include decreased surgical site morbidity, decreased occurrence of patellofemoral adhesions and reduced incidence of anterior knee pain. Though the semitendinosus tendon has only 75% and gracilis 49% of the strength of native ACL, the quadrupled semitendinosus or semitendinosus-gracilis have a greater tensile load.

Our study is to evaluate the functional outcome of arthroscopic anatomical single bundle ACL reconstruction using hamstring autograft versus quadriceps tendon graft. This prospective study was conducted in Sree Balaji Medical College and Hospital, Chrompet, Chennai to clinically evaluate the clinical results of arthroscopic ACL reconstruction between qudriceps tendon and hamstrings tendon graft. This study group comprised of 50 patients with follow up. Patients who went for ACL reconstruction with Hamstring graft are 36 and with quadriceps graft are 14 patients [20-36].

We conclude that ACL reconstruction gives good functional outcome with both Hamstrings and Quadriceps Graft. The post-operative functional scores improved significantly as compared to pre-operative scores. Both grafts are equally good and give good functional results. We could not find one graft being better over other. Both scores used in our study are subjective scores which limits the study design. The future scope of the study is by long-term follow up and to incorporate objective scoring system into the study design.