Objective: To assess the prevalence of crossbite among patients reporting for orthodontic treatment and its association with different factors.

Materials and Methods: 980 subjects (490 men, 490 women) aged 5-45 years were evaluated to determine the prevalence of crossbite in a South Indian population. The patients were classified accordingly into 3 dentition stages (primary, mixed and permanent), unilateral or bilateral crossbite, anterior or posterior crossbite. The results were analysed using SPSS version 22.

Conclusion: An increasing prevalence of crossbite was observed from the primary dentition towards permanent dentition in this study.

Crossbite is an abnormality in the buccolingual relationship between upper and lower teeth that requires an early intervention to prevent further discrepancy in the growth of the maxilla and mandible [1]. The discrepancy can be unilateral, bilateral, anterior or posterior. The mode of treatment for transverse maxillary deficiencies is rapid or slow maxillary expansion [2]. There are many factors that might lead to the development of crossbite such as heredity, dental arch length, retained deciduous or supernumerary teeth, thumb sucking habit, Skeletal-anteroposterior abnormality and cleft lip and palate [3].

Previous literature conducted by Bell and Kiebach in 2014 observed the prevalence of posterior crossbite is higher in deciduous and mixed dentition, with a prevalence in the age range of 3 to 12 years. Furthermore they also concluded that a high prevalence of 90% of functional crossbites [4]. Another study showed higher evidence of bilateral crossbite among the turkish population in the permanent dentition [5]. Untreated unilateral or bilateral posterior crossbite in a child result in transition to adulthood leading to mandibular asymmetric development [6].

The condition where one or more of the upper incisors are in linguo-occlusal relationship is known as anterior crossbite, that mainly is prevalent in the primary and mixed dentition. It can be due to the disharmony between the dental, skeletal and functional components [7]. There is usually a straight profile in centric relation with class 1 molar and canine relation. However, there can be pseudo class III or in some cases functional anterior crossbite that might be caused because of mandibular hyper propulsion, in turn causing the position of the tongue to have premature canine contact that entraps the maxilla [8]. In these cases, there will be an edge to edge relation of the incisors in the centric position along with class 3 relationships [9].

Although the maxillary expansion has been quite successful, there have [12] also been incidences of relapse. There was a higher relapse rate in the early mixed dentition. Previous literature have reported a 50% prevalence of re-treatment of crossbite in the early or late mixed dentition [13,14].

The data and studies that show the prevalence of crossbite in different age groups or dentition are important data for the diagnosis, etiologies of orthodontic anomalies, treatment and management strategies, and necessary public health resources. The aim of this study was to evaluate the prevalence of crossbites in patients reporting for orthodontic treatment and to assess the factors associated with it

This study was designed as a retrospective cross sectional study analysing all the patients who had crossbite. The data of patients between the age of 6 years and 35 years undergoing orthodontic treatment from June 2020 to March 2021 for crossbite were selected in the study. The records with incomplete medical documentation, replication of results in different time periods with improper clinical photographs or diagnosis were excluded from the study. Patient details like age, gender, type of dentition, anterior or posterior crossbite were included. The prevalence of cross bite among male and females was determined. The collected data was described in the form of frequency distribution and percentile. Statistical analysis was done using Statistical Package for the Social Sciences (SPSS). A Chi square test was applied to determine the significance between groups. P value <0.05 was considered to be statistically significant with a confidence interval of 95%. 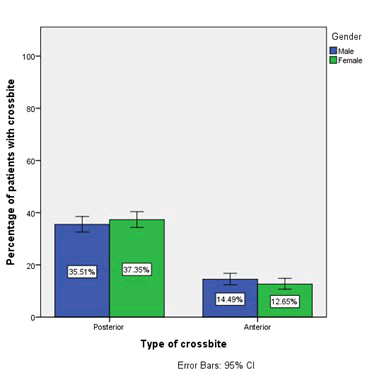 The association between gender and side affected in crossbite showed a significant relation, where male had 35.31% unilateral crossbite whereas female had only 14.69% prevalence (Figure 2). 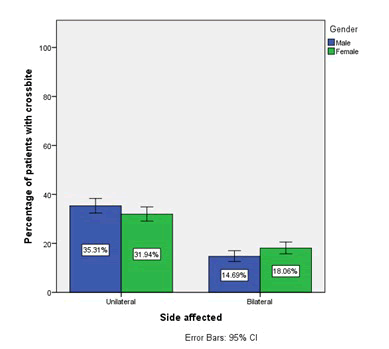 Figure 2: Bar graph showing the association between side affected and gender. X axis represents the side affected as unilateral or bilateral and Y axis the percentage of patients with crossbite. Blue bar denotes male and green bar denotes female. Unilateral crossbite was more common among males than in females with 35.31%. The association between the side affected and gender was found to be statistically significant. Pearson Chi square test, p=0.0027 (p<0.05, statistically significant).

The association between the age group and type of crossbite showed higher occurrence of posterior (50%) and anterior crossbite (19.29%) among the age group 16-35 years. However there was no significant relation, p=0.1 (p>0.05) (Figure 3). 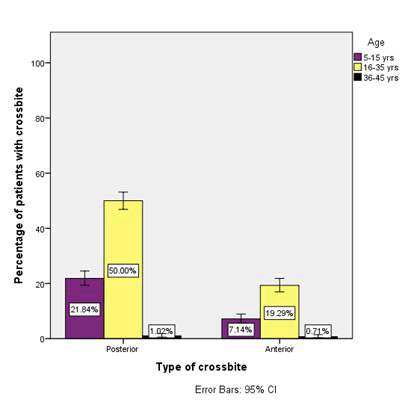 There is a notion among dentists that malocclusion does not depict a special characteristic of the permanent dentition, but can be seen in the stages prior to attaining the occlusal maturity. The causes of crossbite can be dental, skeletal or functional [15]. In the present study there was an overall prevalence of crossbite of 8.30% among all the malocclusions that were diagnosed. This was much lower than a previous study conducted previously by Kutin, where the prevalence of crossbite was 54% [16]. Few other literatures conducted among the Turkey and French population showed a prevalence of 27.4% and 15.4% respectively [17,18].

Crossbites require professional assistance as early as possible, either in the primary dentition stage or in the early mixed dentition through counselling combined with or without interceptive orthodontics [22,30]. This intervention is required to prevent further growth or dent skeletal alternations that cause defects in swallowing and speech of the patient.

Studies that are conducted based on a particular region or place give a significant amount of information; basis may give significant information about the prevalence and changes in pattern of malocclusion that aids in the diagnosis and planning of treatment.

This study showed a higher prevalence of unilateral posterior crossbite. There was also a higher prevalence of crossbite in the permanent dentition. Epidemiological prevalence studies help in the resource planning, diagnosis and treatment planning for crossbite malocclusions. The present suggests lack of awareness about the seriousness or severity of their dental condition in the early stages. This may be attributed to their weak oral health knowledge and parent’s negligence toward malocclusion.

This research was done under the supervision of the Department of Orthodontics, Saveetha dental College and Hospital. We sincerely show gratitude to the corresponding guide who provided insight and expertise that greatly assisted the research.

There was no potential conflict of interest.