Hepatitis is a general term for an inflammation of the liver due to a variety of causes including metabolic diseases, drugs, alcohol, toxins, and viruses. The hepatitis B virus (HBV) is a major cause of infectious liver disease. The present study includes to determine and compare the Hepatitis B antibody levels among immunized and unimmunized adolescents and to estimate and compare the anti HBs titres among the immunized and unimmunized adolescent children aged 10-19 years. The present study focuses on the clinical profile of the study population.

Worldwide approximately 30 million people are persistent carriers of HBV. In East Asia, where vertical transmission of HBV is the major cause of infection, more than 20 per cent of the population are chronic carriers. The clinical correlation of HBV infection is extremely unpredictable. The virus can cause a disease of variable duration and severity, ranging from a subclinical form to acute hepatitis, gall bladder disorders and severe chronic liver disease [1-4]. Since vaccination is the only route for eradication of HBV, development and delivery of a vaccine which is effective against all strains, and which induces a response in all vaccine recipients without exceptions, is an absolute requirement [5].

In India hepatitis B vaccine in the National universal immunization program in the entire country in 2011 -12 6. Initially, a 3-dose schedule of 6 th week and 10 week and 14 weeks. This was later changed to 6, 10 and 14 weeks with an additional dose being given within 24 hours of birth, where possible [7].

This study was conducted as a cross sectional study.

This study was conducted in the Department of Pediatrics in Sree Balaji Medical College and Hospital, Chennai.

Vaccinated and unvaccinated (for Hepatitis B vaccine) adolescents between age group of 10-19 years, who attended the department of pediatrics, were included in this study.

This study was conducted during the period of April 2017 to March 2018.

Ethical committee approval was obtained for this study from the institutional Human ethics committee in Sree Balaji Medical College and Hospital, Chennai.

One hundred sixty adolescents aged 10-19 years who were vaccinated with Hepatitis B vaccine and One hundred sixty adolescents who were unvaccinated with Hepatitis B vaccine in the same age group were included as participants. The individual participant was explained about the study and they were also assured that, their identity would be kept strictly confidential. Written informed consent was obtained from the study participant and from their parents in Both the English and Tamil formats of the Informed consent are enclosed in Annexure. After taking consent, using a proforma, history regarding the vaccination status of the participants was collected and entered, following which venous blood samples were collected from all the participants to assess the Anti HBC and Anti HBs antibodies titre by ELIZA method, the procedure of which is as follows.

The test principle is based on Antigen Sandwich Enzyme Immunoassay. In this technique, serum samples containing HBs antibody can react with coated recombinant HBs Ag (ad and ay subtypes). After incubation and washing, attached HBs antibodies revealed by adding HBs antigen HRP-conjugate which reacted with attached HBs antibody chromogen substrate is added and incubated for 15 minutes, resulting in the development of a dark blue colour. The colour development is stopped with the addition of stop solution, and the colour is changed to yellow and measured spectro photometrically at 450 nm. The concentration of HBs anti body is directly proportional to the colour intensity of the test sample. Results are interpreted on the context of clinical manifestation, medical history, and other diagnostic tests.

✓ Those with anti-HBs antibody greater than 10 mIU/ml should be considered as positive or considered that patient has detectable level of antibody.

✓ Those with anti-HBs antibody lower than 10 mIU/ml should be considered as negative or undetectable level of antibody in patient’s sample.

✓ Anti Hbc titre were reported as positive and negative.

The data was entered in excel sheet and analyzed using SPSS (Version 16). Descriptive statistics with mean, standard deviation, and proportion (%) was calculated for quantitative variables. To test the hypothesis ANOVA, Z test and Chi Square test were used. p value <0.05 was considered as statistically significant.

The socio-economic classification was measured based on the BG Prasad scale. This scale was introduced in 1961 was later modified in 1982, 2001, 2013 and in 2016. The scale is updated periodically as inflation is an ongoing process. There are tools and calculations available which enables real time update of the classification to maintain the validity of the published data. The revised Classification for 2016 is as follows (Table 1).

Table 2: Age distribution of the participants. Figure 1. Age distribution of the participants.

Table 3: Gender distribution of the participants.

Table 4: Details of educational status of the mothers. Figure 2. Gender distribution of the participants. Figure 3. Details of educational status of the mothers.

Table 5: Details of Educational status of the fathers. Figure 4. Details of educational status of the fathers.

Table 6: Area of residence of the participants. 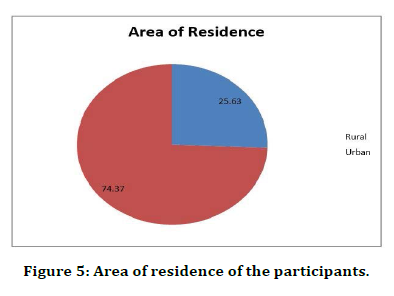 Figure 5. Area of residence of the participants. In the present study, among 88.7% adolescents who got vaccinated 48.1% were males and 40.6% were females. The difference among vaccinated and unvaccinated adolescents for anti HBs was found to be highly statistically significant. (p value<0.001). In a study among 1415 children who were vaccinated there were 735 males and 680 females.

Similarly, among 5% of vaccinated adolescents 3.1% were boys and 1.9% was girls and the difference for anti HBC was not statistically significant. (p value >0.05). In a among immunized children, 28 participants were found to have Anti- HBC positive.

Presence of anti-HBs antibodies, which protect against HBV infection, can be related either to hepatitis B vaccination or to prior HBV infection. Their higher prevalence in the immunized cohort, despite a lower anti- HBC seroprevalence in this group, indicates that the higher rate of anti-HBs in the immunized cohort was the effect of hepatitis B immunization. This implies that administration of hepatitis B vaccine in the Indian field setting did lead to induction of a protective antibody response against HBV [8- 22].

The encouragement and support from Bharath University, Chennai is gratefully acknowledged. For provided the laboratory facilities to carry out the research.