In our study done in hundred patients admitted in general medical ward in Sree Balaji Medical College Hospital following conclusions were obtained. Summarizing our study: 42 patients had hypomagnesemia ( 42 % ) Youngest patient in our study was 45 years of age; mean age of patients in our study was 57.73 years Hypomagnesemic patients had a higher incidence of complications like neuropathy, retinopathy, and nephropathy. Hypomagnesemia correlated with higher incidence of ischemic heart disease and hypertensive heart disease.

Diabetes mellitus, the metabolic disease characterized by hyperglycemia due to insulin deficiency or dysfunction or both. The chronic hyperglycemia of diabetes is associated with long term compliations – micro and macro vascular – retinopathy, nephropathy, neuropathy, cerebrovascular disease and peripheral vascular disease. Majority of cases of diabetes fall into two broad categories, Type 1 and Type 2 Diabetes mellitus. Type 2 Diabetes accounts for approximately 90 to 95 percentage of all diagnosed cases of diabetes. Long term complications of diabetes are include retinopathy, nephropathy and peripheral neuropathy and foot ulcers. Patients with diabetes have an increased risk of atherosclerotic, cardiovascular diseases. Hypertension and abnormalities of lipid metabolism are often found in diabetes [1- 3].

There are several pathogenic processes involved in the development of either form of diabetes or long term complications. The basis of the abnormalities in carbohydrate, fat, protein metabolism in diabetes is deficient action of insulin on target tissues. Defective insulin action results from inadequate insulin secretion and or reduced tissue response to insulin action. Defect in insulin secretion or action on target organ frequently coexist in the same patient. Several vitamins and minerals act as cofactors in the enzyme reaction regulated by insulin. Deficiency of several vitamins and minerals such as vitamin E, potassium, magnesium, zinc and chromium may worse the carbohydrate intolerance. Of these the need for potassium or magnesium replacement is relatively easy to detect based on low serum levels [4,5].

Magnesium is the fourth most abundant cation in the human body and the second most abundant intracellular cation. Magnesium plays an essential role in carbohydrate metabolism and in insulin action. Magnesium acts as a cofactor in glucose transport mechanism of the cell membranes and various intra cellular enzymes involved in carbohydrate metabolism. The concentrations of serum magnesium in healthy people are remarkably constant whereas 30 to 35% of diabetes have low serum magnesium concentration. Magnesium deficiency has a negative impact on glucose homeostasis and insulin sensitivity in patients with type 2 diabetes as well as the evaluation of the complications like retinopathy, cardiovascular diseases, nephropathy and neuropathy. Moreover, low serum magnesium is a strong, independent predictor of development of type 2 diabetes. The present study was undertaken with an aim to estimate prevalence of hypomagnesemia in patients with type 2 diabetes and correlate serum magnesiumconcentrations with micro and macro vascular complications of diabetes [6-9].

100 patients with type 2 DM who were admitted in general medical ward in Sree Balaji Medical College Hospital were randomly selected for this study. From all patients detailed history, thorough clinical examination and relevant biochemical investigations were obtained.

This study was composed of 100 patients of type 2 DM of which 54 were men and 46 were women. These patients were further grouped according to their age, duration of diabetes, mode of treatment, glycemic control, presence, or absence of co morbidities (ischemic heart disease and hypertension) and presence / absence of diabetic complications (retinopathy, neuropathy and nephropathy). 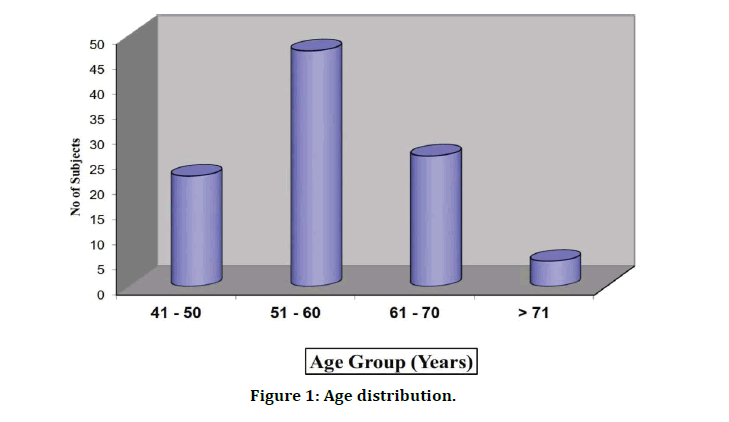 In our study among the 100 patients, hypomagnesemia (serum Mg <1.7 mg/dl) was found in 42 patients of type 2 diabetic patients.58 patients had normal serum magnesium level. No patient had hypermagnesemia. No significant difference was found in the rate of hypomagnesemia in men and women (42.86% and 57.14% respectively). There was no significant statistical difference found between men and women p value=0.057 (Table 4 and Figure 2). 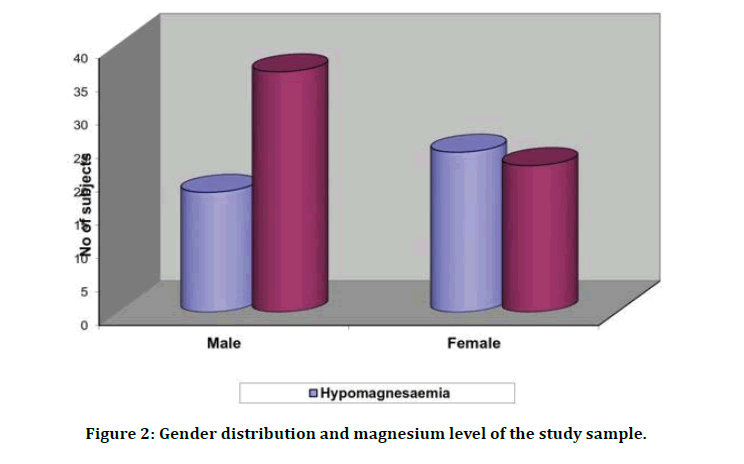 Figure 2: Gender distribution and magnesium level of the study sample. 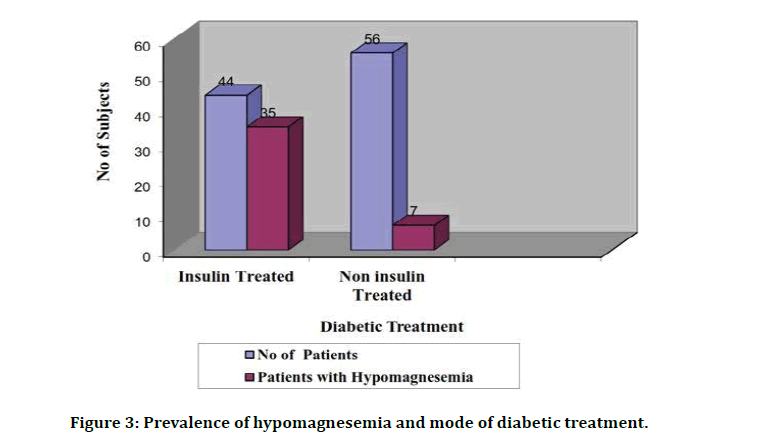 Figure 3: Prevalence of hypomagnesemia and mode of diabetic treatment. The causes for the high prevalence of hypomagnesemia in diabetes may be due to increased urinary loss, low dietary intake or impaired magnesium absorption compared to healthy individuals; Rude RK, Mc Nair P, Christiansen MS et al in their study found excessive urinary magnesium loss in diabetes. Recently defective tubular reabsorption in thick ascending loop of henle is postulated, that results in hypomagnesemia [11]. The reason for the tubular defect is unclear. In diabetes low serum magnesium status due to low dietary intake is unlikely. Only 5.4% of the diabetic groups and 9.1% of the control group in European dietary assessment studies by Walti MK Zimmermann et al had intake of magnesium below their individual requirements. In addition, type 2diabetes patients with reasonable metabolic control absorb dietary magnesium to a similar extent as healthy controls. In diabetes hyperglycemia and osmotic diuresis may cause excessive urinary loss of magnesium and leads to low serum magnesium status [12].