Obsessive-compulsive disorder (OCD) is the fourth commonest mental disorder with disability in severe cases often comparable to the disability associated with mental illnesses such as schizophrenia and bipolar disorder. OCD is one of the top IO disabling disorders as reported by WHO. To assess relationship of depression on quality-of-life m persons suffering from obsessive compulsive disorder. It is a comparative study; total sample size is 32 who satisfied the inclusion criteria and gave informed consent to be included in the study. The mean QOL scores in all domains were lower in the OCD than the control group. (Physical QOL, p=<0.001, Psychological QOL, p=<0.001, social QOL, p=0.001, environmental QOL, p=<0.001). this shows that quality of life is poorer in the OCD group in comparison to the control group. This current study indicates that the quality of life in persons suffering from OCD can be effectively improved by simultaneous treatment of OCD and co morbid depression.

Excessive thoughts (obsessions) that lead to repetitive behaviours (compulsions). Obsessive-compulsive disorder is characterised by unreasonable thoughts and fears (obsessions) that lead to compulsive behaviours. OCD often centres on themes such as a fear of germs or the need to arrange objects in a specific manner. Symptoms usually begin gradually and vary throughout life. Treatment includes talk therapy, medication, or both. OCD is one of the top IO disabling disorders as reported by WHO. However, till recently it was a rare disorder with a prevalence rate of less than 5 per 1000 adults. Epidemiological studies have shown that roughly about 2% of adults suffer from this intriguing disorder. It is now evident that the prevalence of OCD in adolescents is comparable to that in adults although the exact prevalence of OCD in children is not known. Despite such a high prevalence only a minority of sufferers seek treatment and that too after several years of silent suffering. This is because of the secretive nature of the condition.

The OCD usually begins in adolescence or early adulthood although it can begin in childhood. Nearly 65% of the persons have their onset before age 25 whereas fewer than 15% have onset after age 35 [1-4]. In our clinic samples most, persons had onset before 18 years [3]. The following are the common obsessive-compulsive symptoms (Table 1). Thus, the study aimed to assess the quality of life and prevalence of depression in persons suffering from obsessive compulsive disorder in a general hospital outpatient set up.

• No current or history of obsessive-compulsive disorder.

• Substance abuse other than nicotine.

Results are detailed in Table 2 to Table 5 and Figure 1 to Figure 3.

Table 5: Student't'-Test to compare the mean QOL between OCD and Control groups in each domain. 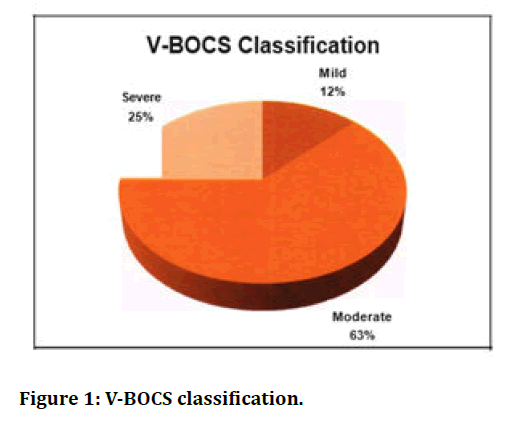 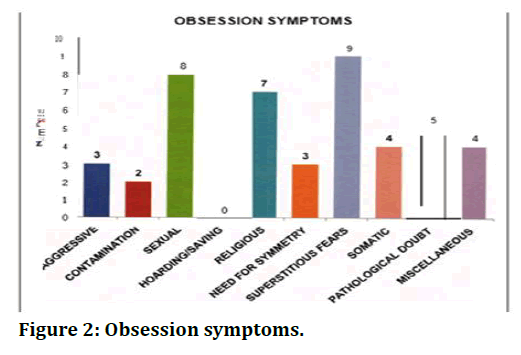 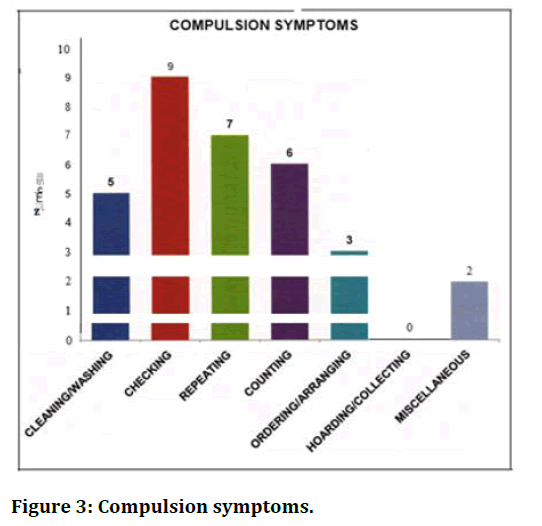 This study was hospital based and cross sectional like most of the studies done in this field. In this, OCD group contained persons who were diagnosed to have obsessive compulsive disorder according to standard criteria (ICD-10 diagnostic guidelines) and by a Professor in Psychiatry. The control groups were age, sex and socio demographic matched general population.

The OCD group contained 32 subjects with diagnosis of obsessive-compulsive disorder and the control group 32 subjects with age, sex and socio demographic matched general population. The mean age of the OCD group is 31.47 ± 8.6 years and that of control group as 31.53 ± 8.5 years with a p value of 0.977. There were 20 males and 12 females in the OCD as well as control group with a p value of 1.000. There was no significant difference between the educational and socio-economic status of the two groups.