A Study of Serum Zinc Levels in Children with Simple Febrile Convulsions in Comparison with Febrile Children Without Convulsions
All submissions of the EM system will be redirected to Online Manuscript Submission System. Authors are requested to submit articles directly to Online Manuscript Submission System of respective journal.

A seizure is a transient occurrence of signs and/ or symptoms resulting from abnormal excessive neuronal activity in the brain. Approximately 30% of patients who have a first a febrile seizure later develop epilepsy [1]. Febrile seizure is the most common form of seizures, it is 2-fold more common in boys than in girls. The mechanism of febrile seizure has multi factorial etiology, febrile seizure occurs with fever (temperature>38 0C) and without symptoms of CNS infections. However, sometimes these seizures signify major structural, inflammatory, or metabolic disorders of the brain, such as meningitis, encephalitis, acute stroke, or brain tumor. An unprovoked seizure is one that is not an acute symptomatic seizure. Remote symptomatic seizure is one that is secondary to a distant brain injury, such as old stroke. Reflex seizures are usually precipitated by a sensory stimulus such as flashing lights. Infants and children have more chance to have seizures than adults. This reflects the greater neuronal excitability at certain ages as the excitatory glutamate system and inhibitory GABA system do not always balance each other. This results in a tendency to exhibit symptomatic seizure related to high fever, infections, minor asphyxia, medication, bacteria toxins and biochemical disturbances like hyponatremia, hypernatremia, hypocalcemia etc.The clinical diagnosis of epilepsy usually requires the occurrence of at least one unprovoked epileptic seizure with either a second such seizure or enough EEG and clinical information to convincingly demonstrate an enduring predisposition to develop recurrences [1]. Zinc is an essential mineral that is obtainable as dietary supplement. Zinc is essential for proper growth and development. An important catalyst for 100 specific enzymes. Zinc is essential for the wound healing, DNA synthesis, immune function, protein synthesis and cell growth. A few of zinc dependent enzymes include carbonic anhydrase, alkaline phosphatase, carboxypeptidase, superoxide dismutase, phospholipase C etc. Zinc plays a major role in tissue growth. This is related primarily to its function in the regulation of protein synthesis as well as synthesis and catabolism of nucleic acids. With respect to transcription, zinc appears to interact with nuclear proteins that bind to promoter sequences of specific genes. DNA base pairs which are recognized by zing fingers during DNA replication and transcription. The metallothionein gene, synaptic signaling, and apoptosis, all are regulated by zinc. Zinc is extremely important to the functional development of polymorphonuclear cells and antigen presenting cells. Zinc plays an important role in regeneration of intestinal mucosa, wound healing, and epithelial cell turnover. These functions explain why zinc plays such an important part in the protection against infections. Numerous studies have been done to analyze the role of trace elements in febrile convulsions. Studies have shown that hypozincemia predisposes to febrile convulsions and many such studies have been done in Iran, Turkey, and Bangladesh. Two studies done in India one at Chennai and one at Mumbai have shown similar results. This study has been done in Sree Balaji Medical College and Hospital to check if the results of previous studies hold good for the population in and around the vicinity of Chennai.

✓ Sample size of 100 was selected for each group.

✓ Children with fever without convulsions.

The following children were excluded from the study.

Informed consent of the parents of the two groups of children was obtained in a printed consent form in Tamil as the predominant population was illiterate. Any questions or doubts were cleared by the examining physician in Tamil and the signature of the parent or left-hand thumb impression was obtained. A thorough history like duration of fever, time of onset of seizures, type of seizures, duration of seizures, past history of seizures and family history of seizures were noted. In addition, history suggestive of any triggering factors for the febrile episode like cough and cold, nasal discharge, ear discharge, burning micturition or crying during micturition were also recorded.

This was followed by general examination and systemic examination in detail. Those children who showed features of any chronic congenital or acquired illnesses were excluded. Patients with signs and symptoms suggestive of CNS infections (meningeal signs, bulging anterior fontanel and altered sensorium) were excluded. Three milliliters of whole blood were collected by venipuncture under strict aseptic precautions in sterile metal free acid propylene washed plastic test tube. The sample could stand without any disturbance for five hours to enable settling down of erythrocytes. Then the serum was separated by centrifuging at 2500 revolutions per minute under aseptic conditions. The serum alone was removed and transferred to acid washed plastic collection tube which was properly labeled. The tube was sealed tightly and stored in the freezer compartment of the refrigerator till transfer to Hitec healthcare laboratory &research center. Where the zinc levels were measured, the serum zinc levels were measured by atomic absorption spectrometry - Perkin Elmer Model 2380 as per the procedure already described. The analyzing personnel were blinded about the clinical details of the samples in order to prevent investigator bias.

This study was a case control study, conducted at Sree Balaji medical college and hospital, wherein the serum zinc levels in two groups of children, one group consisting of children with simple febrile seizure and other group consisting of children with febrile illness without convulsions were compared. The data collected was entered by a data entry operator and analyzed by a statistician using SPSS software. The following test statistics were used in the analysis.

In Table 2 and Figure 2, among children with febrile convulsions 48% were females 52% were males and among febrile children 55% were female 45% were males. The above result shows that there is no statistical significance. Thus, the two groups were comparable with respect to gender distribution. 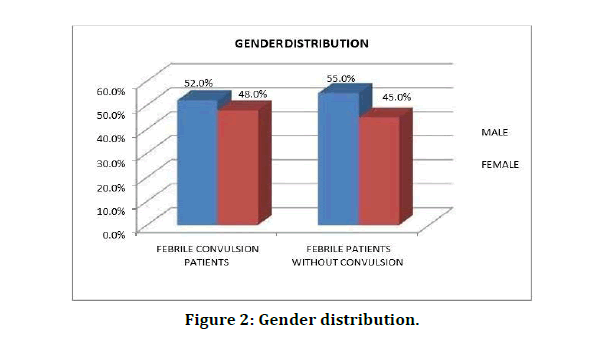 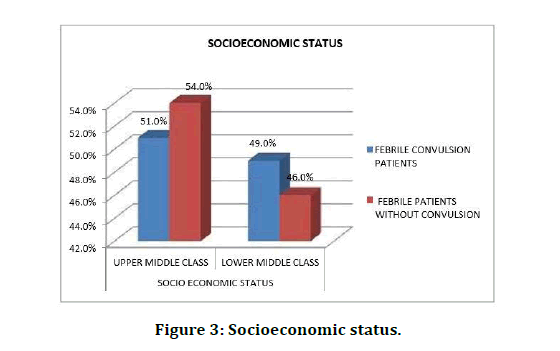 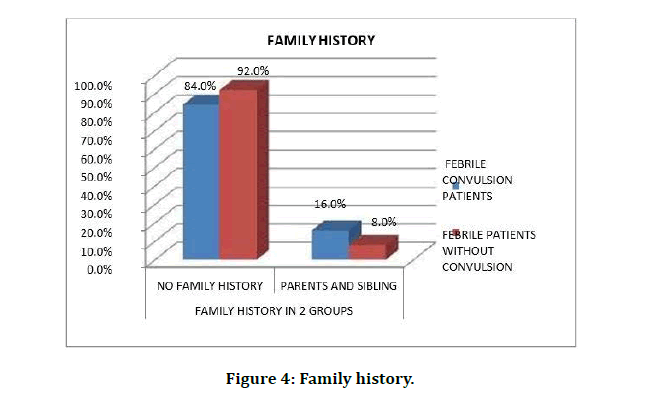