A Study on Chronic Venous Insufficiency

Doppler study is the best tool for diagnosing thromboembolic condition in the blood vessels and is also helpful for preoperative mapping of the veins. In this study, Males formed the major group 38 cases (76%) with suspected venous abnormalities than females who contributed 12 cases (24%). The predisposing factors were prolonged standing in 23 cases (46%), hereditary in 6 cases (12 %) and obesity in 5 cases (10 %). GSV varicosity was noted in 54 % of the cases with varicosities Majority of the patients (48%) underwent perforator ligation.

The term “Chronic venous insufficiency” (CVI) refers to venous valvular incompetence in the superficial, deep and/or perforating veins. CVI in a patient may present in various forms. Signs and symptoms of CVI may range from mild itching to severe pain and massive swelling. The signs and symptoms produced by venous hypertension as a result of structural or functional abnormalities of veins. The various causes for CVI in the lower limbs are deep vein thrombosis, varicosity, venous valvular defects, AV malformations and rarely congenital. The symptoms are usually due to reflux and stasis of blood in the venous system. The symptoms may include aching, heaviness, itching, swelling, burning sensation, pain and cramps [1,2].

There are many investigations that are useful in evaluating CVI. These investigations can determine the anatomical extent, pressure changes, muscle pump dysfunction, valvular abnormalities and map the extent of venous involvement. The investigations for evaluating CVI may be invasive and non-invasive. The invasive procedures frequently used in evaluating CVI are phlebography and ambulatory venous pressure (AVP) measurements. Phlebography involves the injection of contrast in the leg with visualization of contrast travelling up and down the lower extremity in the deep venous system [3-5]. Ambulatory venous pressure (AVP) monitoring is another standard procedure in assessing CVI. This study aims to evaluate the diagnostic efficacy of colour flow duplex imaging in patients presenting with clinical symptoms and signs of chronic venous insufficiency and to correlate the clinical examination findings and ultrasound findings with surgical findings.

50 patients with symptoms of lower extremity were included in this study. Study was done to identify the cause, to diagnose and establish venous insufficiency as their symptomatic cause with the help of Doppler ultrasound technique. The study was conducted on 50 patients who were referred to the Department of Radio diagnosis in period of 2 years from September 2018 to September 2020 in Sree Balaji Medical College and Hospital, Chrompet, Chennai.

• All patients clinically suspected to have chronic venous disease.

• Patients of both the sexes and all age groups will be included in the study.

• Patients who present with pain, swelling, dilated painful tortuous veins and ulcers of the leg.

• Patients who will undergo surgery for varicose veins in Sree Balaji college and hospital.

• Patients with suspected arterial and lymphatic diseases of lower limbs.

Standard examination using the linear probe was done to visualize the common femoral vein, superficial femoral vein, popliteal vein followed by the calf veins. The patient was examined in the supine position with legs abducted and externally rotated with slight flexion of the knee for evaluation of the femoral venous segment. Patient was put in prone position to examine the popliteal vein. Calf veins were evaluated in supine position and the knees slightly flexed, internally rotated for the anterior tibial veins and externally rotated for posterior tibial and peroneal veins.

In our study, swelling (30%) was the most clinical presentation followed by varicosity (24%) as the second most common. In our study an isolated left limb involvement (27 cases out of 40 cases) was more common than the right side involvement. 10 cases (20%) showed bilateral involvement and prolonged standing was the commonest cause of varicosity (46%), cases followed by idiopathic in 32% cases.

Majority of the patients underwent perforator ligation. All the surgical findings correlated with the Doppler findings (Table 1 and Figures 1 to Figure 5).

Table 1: Type of limb involvement in the case study of patients with evidence of CVI. 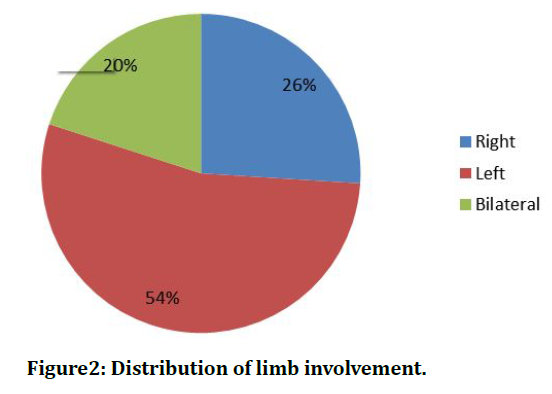 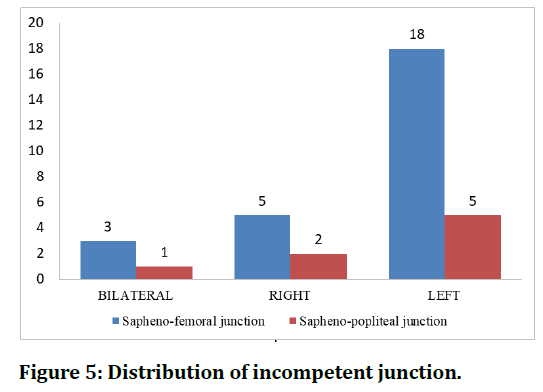 In our study venous abnormalities were seen more commonly in left lower limb (54 %) followed by right lower limb (26 %). Bilateral involvement was seen in 20%of the cases. This is in correlation with the study conducted by Cockett, Nigas and Thomas (1979) that showed that the venous abnormalities were common in the left extremity. This was attributed to the crossing over of left common iliac vein by right common iliac artery, giving rise to venous stasis. The predisposing factors commonly seen in cases with CVI were prolonged standing in 23 cases (46%), hereditary in 6 cases (12 %) and obesity in 5 cases (10%). Around 32 % of the cases had no known predisposing factors. This is in correlation with the paper published [7]. which presents the theory according to which mechanical hydrostatic pressure generated by long periods of standing is a major etiological factor for the development of chronic venous insufficiency in the lower extremities.

All patients were operated after venous mapping was done with the help of doppler examination of the affected lower limb. Majority of the patients (48%) underwent perforator ligation. Other patients underwent GSV ligation and stripping. All the surgical findings (100%) correlated with the Doppler findings. This was in correlation with the study done by Peter Dixon which showed 98% sensitivity of Doppler examination and venous mapping prior to surgery [8,9].

Doppler ultrasound provides a non-invasive and reliable method for examining the venous system. Colour Doppler can be used instead of venography or varicography in many cases and may be the only examination required to define the anatomy and function in patients with varicose veins. Varicography demonstrates perforator veins which are obviously incompetent but ultrasound has the advantage that it examines the segments of deep and superficial systems and demonstrates the directions of blood flow within each segment. Compared to other modalities like contrast enhanced CT and MRV, Color Doppler is much cheaper, reasonably accurate and much more widely available.