A Study on Nootropic Effect of Daucus Carota in Animal Models

The ability to learn is possessed by humans and animals. Human learning may occur as part of education or personal development [1]. In psychology, memory is an organism's mental ability to store, retain and recall past information. Traditional studies of memory began in the fields of philosophy, including techniques of artificially enhancing the memory. The late 19th and early 20th century put memory within the paradigms of cognitive psychology. In recent decades, it has become one of the principal pillars of a branch of science called cognitive neuroscience, an interdisciplinary link between cognitive and neuroscience [2]. Dementia is a mental disorder characterized by loss of intellectual ability sufficiently severe that interfere with one's occupational or social activities. The common cause of dementia is Alzheimer's disease, which is progressive neuro-degenerative disorder associated with loss of neurons in distinct areas of brain. The central cholinergic pathway, play a prominent role in learning and memory process. Centrally acting antimuscarinic drugs (e.g. Scopolamine) impair learning and memory both in animal and human beings. Epidemiological studies of Indian population reveal that dementia is largely a hidden problem. Prevalence rates for dementia increase exponentially with advance in age. Dementia may be reversible when caused by drugs, alcohol, hormones, vitamins, imbalances and depression or irreversible when caused by disease or injury. The dementia in the elderly, about 5 million people in the United States are, estimated to be afflicted by this disorder and the percentage approximately doubles with every 5 years of age with about 1% of 60 years old and about 30 % of 85 years olds having the disease [3]. Alzheimer's disease (AD) is the most common forms of dementia and it is associated with deposition of beta-amyloid protein in brain tissue and abnormal phosphorylation of the intracellular tau proteins, cang abnormalities of microtubule assembly and collapse of the cytoske1eton. Pyramidal cells of the cortex and sub-cortex are particularly affected [4]. The word nootropic, created by Dr. Comeliu Giuerga in 1964, is composed of the Greek words noos, or "mind", and tropien, or "to act on". It is used to describe a broad variety of substances, which are alike in that they possess cognitive enhancing effects. Substances classified as nootropic are very diverse and range from powerful pharmaceuticals to natural plants, herbs, vitamins and nutrients. Other terms used to describe nootropic drugs include "smart drugs", "cognitive enhancers", "smart nutrients", brain boosters" and "brain enhancers." loss, age related memory decline and in lack of concentration. The substance piracetam (Nootropil®) was not only beneficial, but also found to have fewer side effects hence the biochemists described it "as safe as salt!" [5].

Nootropic substances have been proven to provide a vast array of cognitive benefits. Some nootropics have no acute effects and must be taken continually for a few weeks before effects will present themselves, while others can be felt immediately. Carrot (Daucus carota) is one of the most important seasonal root vegetable of Apiaceae (Umbelliferae) family, grown extensively in India during winter season. It is an excellent source of -carotene, a precursor of vitamin A, which protects cells from free radicals which may damage the basic cell structure of healthy cells [6,7]. Carrot is rich in antioxidants like acarotene, -carotene, phytochemicals, glutathion, calcium, phosphorus and consumed as versatile vegetable with excellent source of calcium pectate, an extraordinary pectin fiber that has the cholesterol lowering properties [8]. Carrot juice has the therapeutic property which improves the boosting of immunity, helps to heal minor wounds, injuries, reduce the risk of heart disease and blood pressure. It cleans the liver by excreting fats and bile, helps to fight anemia, improves eye health, reduces the risk of high blood pressure, stroke, heart disease and some types of cancer [9,10]. In view of this, the present work is planned to study the nootropic activity of alcoholic extract of Daucus carota in experimental animals, mice and rats [11].

Carrot (Daucus carota) was purchased from the local market in Chennai and identified by The Director, National Institute of Herbal Science, Anna Nagar, and Chennai. The plant extract was prepared using soxhlet apparatus, by maceration of 50 g of the dried chopped carrot in a mixture of 200 ml ethanol and 200 ml distilled water by shaking them for 48 h and pressing the solution out of the material using a filter press.. The final extracted material weighed 10g. Concentrations of the extract were prepared by dissolving final product in distilled water [12]. In the present study the DCE was subjected for acute toxicity (LD50) studies. Acute toxicity studies of the extracts were determined in mice and rats as per OECD Guidelines No: 425 [13]. For the assessment of nootropic activity, three dose levels were chosen in suc1 a way that, middle dose is 1110th of the maximum dose during toxicity study, and a low dose, which is 50% of the 1110th dose, and a high dose, which is twice that of l /10th dose. i.e., 100mg/kg, 200mg/kg and 400mg/kg respectively. Wistar rats and Albino mice of either sex weighing 200gm and 20gm respectively were used for the study. Animals were purchased from King Institute of Preventive Medicine, Guindy, and Chennai and maintained in the Central Animal House, Sree Balaji Medical College and Hospital, Chennai, India. The animals were individually housed under controlled temperature and hygienic conditions. They all received a standard pellet diet and water ad libitum. Institutional Animal Ethics Committee approved the experimental protocol numbered 006/0l/IAEC/2013. For studying the nootropic action, Diazepam induced amnesia using Elevated plus maze and Lithium induced head twitches (Figures 1 to Figure 4 and Table 1) were followed adopting the previous methods [14]. The significance of differences among the groups was assessed using one way analysis of variance (ANOVA) using Dunnett's multiple comparison test. Significance was accepted at p<0.01. We can also conclude that both allopathic drug piracetam and herbal drug DCE can be mixed for therapeutic usage. 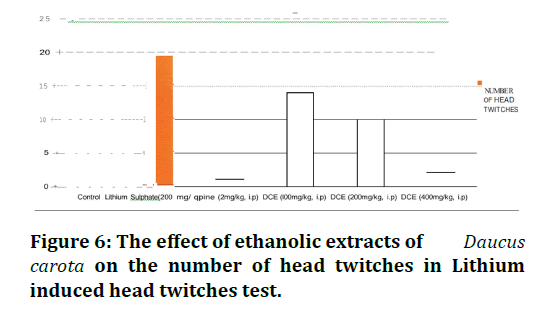 Figure 6. The effect of ethanolic extracts of Daucus carota on the number of head twitches in Lithium induced head twitches test.

The present study was conducted to study the nootropic effect of Daucus carota on wistar rats and albino mice. Nootropics are also known as smart drugs, memory cognitive enhancers, supplements, functional foods or nutraceuticals that improve mental functions such as cognitive attention, concentration, motivation, intelligence and memory. It is thought that these drugs enhance memory by increasing brain's supply of neurochemicals like neurotransmitters, enzymes and hormones that improve oxygen supply to brain or stimulating nerve growth. Different types of mechanisms are proposed to different types of drugs and all these drugs however influence cholinergic function by improving the uptake of choline and facilitate production and turnover of acetylcholine and produce action at both muscarinic and nicotinic receptors. In human individuals a drastic decline in Ach receptors are reported with age. Nootropic drug piracetam was reported to elevate the frontal cortex density of acetylcholine receptors by 30-40% and thus restore acetylcholine levels in the brain and vasodilation improve cerebral blood flow. Brain cells produce energy by ATP from glucose and oxygen and in a variety of dementias carbohydrates metabolism in brain is impaired and degree of reduction correlates with the severity of the dementia. Piracetam further increases adenylate kinase enzyme activity and facilitate the conversion of ADP to ATP and AMP. Thus supplying more energy and oxygen to the brain, piracetam prevents memory loss and boost the brain during hypoxia due to increased oxidative glycolysis. It also increases cerebral blood flow, cerebral oxygen usage metabolic rate and cerebral glucose metabolic rates in chronic impaired human brain function conditions like multi-infarct dementia (due to stroke), senile dementia (Alzheimer type and pseudo dementia) and ischemic cerebral infarcts.

Exact mechanism for memory dysfunction is not clear but some of the evidences like energy dependent inhibition of neuronal membrane functions, formation of edema, opening of voltage dependent Ca2+channels (L and N type) and activation of NMDA receptor, Ca2+ influx with subsequence activation of Ca2+/calmodulin dependent nitric oxide (NO) synthase and NO are demonstrated. a'his NO may react with superoxide anions to produce highly toxic pe oxynitrite which is responsible for energy depletion. Above mentioned are responsible for impairment of memory [15]. Still a controversial but a predominant role of cholinergic mechanism has long been stressed in learning & memory process. The role of the central cholinergic system is well established in memory and deficiency of this is implicated in deficit in memory. The centrally acting reversible AChE, Tacrine which increases Ach concentration is useful in Alzheimer's disease. Though a very good number of other receptor systems are also now reported to involve in the behavioral expression in dementia in animals and human beings as well and the role of these neurotransmitter systems cannot be ignored [15]. In this study, nootropic effect of Daucus carota has been studied. For this purpose, Diazepam induced amnesia using Elevated plus maze were used. In Diazepam induced amnesia using Elevated plus maze, the latency period (LT) i.e. time taken for the mice to reach the enclosed arms, of the three doses of ethanolic extract of Daucus carota were evaluated.

A GABA mimetic agent induces memory impairment and it was reported that a subsequent inhibition of GABA-B receptors has been found to facilitate learning and memory. Diazepam (2 mg/Kg) prolonged TL. The DCE (200 and 400 mg/Kg) have decreased TL thus confirming their nootropic activity. But such a drastic decrease in latency period was not observed with low dose (100 mg/Kg) of Daucus carota. The protective effect offered by these two extracts against diazepam-induced amnesic model may be due to indirect release of Ach in the brain. In Lithium-induced head twitches it was reported that there is an increase in serotonergic transmission in the median raphe of mid brain that interferes with learning acquisition and memory consolidation. In the present study it was observed that Clozapine (2 mg/Kg) and different doses of Daucus carota extract (200 and 400 mg/Kg) have diminished Lithium-induced head twitches (i.e; related to excessive serotonergic function) because of decrease in brain 5-HT activity. This therapeutic potential should be further investigated by a dose response experiment and by isolating and identifying the substances responsible for the nootropic effects, followed by studies based on the use of pure substances in suitable formulations.

This can be developed in the future as a nootropic agent either given alone or in combination with other nootropic drugs. However, the substances responsible for this action have to be identified and isolated. There is also a need for further studies on experimental animals and human beings that may provide definitive and sure data regarding its usefulness, exact mode of action, and therapeutic utilization. Hence Daucus carota may have a prom1smg role m improving memory among forgetful individuals.