Background: Asthma -COPD Overlap Syndrome (ACOS) is a recently defined terminology characterized by persistent limitation in airflow, which shares features of both Asthma and COPD. ACOS is associated with worse outcomes than either condition alone.

Materials and Methods: A cross sectional study conducted in Government Thanjavur Medical College Hospital in the department of Internal Medicine between October 2017 and July 2018. The patients attending the asthma clinic and the medicine op for medications were enrolled into the study. A total of 80 patients were included. The statistical analyses were performed using Graph pad Prism version 5 software.

Conclusion: The prevalence of ACOS in previously diagnosed Asthma or COPD is more alarmingly increasing. Asthma- COPD overlap is characterised by more frequent exacerbations and complications. There is a critical need to better define the management and treatment of this syndrome.

Asthma is a syndrome characterized by variable airflow obstruction that usually commence at young age, though it may occur at any age. It is characterized by airway hyper responsiveness which leads to excessive narrowing of airways that results in reduction in airflow. Chronic Obstructive Pulmonary Disease (COPD) is characterized by persistent airflow limitation1, which is usually not reversible after bronchodilator use. These definitions allow asthma and COPD to be recognized as distinct disease entities. This concept needs to be re-evaluated as many studies have shown that asthma and COPD may coexist, or at least one condition may evolve into the other creating a condition commonly described as Asthma and COPD Overlap Syndrome (ACOS) [1].

According to Global Initiative for Asthma (GINA) and the Global Initiative for Chronic Obstructive Lung Disease (GOLD), ACOS was defined as a syndrome characterized by persistent airflow limitation with several features usually associated with asthma and several features usually associated with COPD. This overlap makes the differentiation between COPD and asthma with persistent airflow limitation difficult, especially in smokers and elderly people. Age of onset is usually around 40 years in ACOS, but symptoms may present since childhood or early adulthood. Respiratory symptoms especially exertional dyspnoea are persistent with variable severity is common presentation. History of previously diagnosed asthma or allergy or history of asthma in family and/or history of exposure to noxious gases may be present. Signs of airway inflammation like Eosinophils and/or neutrophils present in sputum. Lung function test shows persistent airflow limitation. All imaging techniques reveal findings very much similar to COPD. The increase in exacerbation and hospitalization rates, and the poor quality of life could be explained by the presence of more co morbidities in ACOS patients as reported by Rhee et al3. In 2016, Sin et al4 suggested that ACO could be diagnosed when the three major criteria and at least one minor criterion were satisfied [2].

It is a cross-sectional study conducted in Government Thanjavur Medical College Hospital in the department of Internal Medicine between October 2017 and July 2018. The final study population was 80. Only male patients previously diagnosed as asthmatics and on treatment were taken into the study. Those with smoking history and smoking index of 10 or more pack years only were included. The study was conducted after formal informed consent from the patients. Patients with any known pulmonary disease other than asthma, unstable patients with any severe illness, use of inhaled anticholinergics are excluded from the study.

The selected patients were asked to refrain from smoking, coffee, tea and heavy physical activity immediately before the performance of pulmonary function testing (PFT) using spirometer. The patients were also asked to review after complete cessation of intake of salbutamol, theophylline for more than 48 hrs.

Flow sensing electronic spirometer5 which was accurately calibrated was used in this study. A total of 3 readings were taken both before and after bronchodilator nebulisation. Among the three, the well performed reading and the reading with the maximum values was considered. The cases which demonstrated purely an obstructive pattern in the PFT were analysed for the reversibility of the obstruction. The cases who demonstrated a rise of FEV1 % >12% or 200 ml following salbutamol nebulisation for 20 minutes were considered to have a reversible airflow obstruction [3].

FEV1and FVC values are calculated to the percentage of predicted values of FEV1 and FVC according to the patient's age, height and race. FEV1/FVC ratio is calculated. Similarly post bronchodilator FEV1, FVC and FEV1/FVC ratio were calculated6. The patients were divided into three groups based on Spirometry results.

• Those with adequate reversibility and FEV1/FVC ratio more than 0.7 after bronchodilator were categorised as NO ACOS group.

• The patients with partial or no reversibility, but with FEV1/FVC ratio more than 0.7 were categorised as POSSIBLE ACOS group.

• The patients with no reversibility and FEV1/FVC ratio less than 0.7 were categorised as ACOS group. 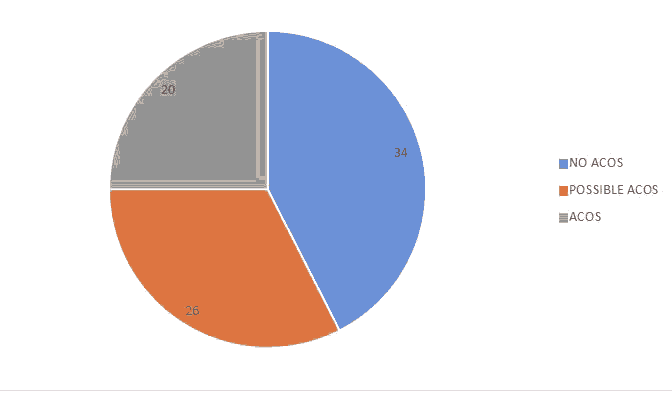 Figure 1: participants of the study.

Table 2: Comparison of various factors for smoking between the groups in the study population.

The smoking index is highest in ACOS group though it is not statistically significant.

Table 3: Comparison of frequency distribution of nu mber of exacerbation of illness between the groups in the study population.

Data are expressed as n with %. Fisher’s exact test was used to compare the frequencies between the groups. *indicates p<0.05 and considered statistically significant. 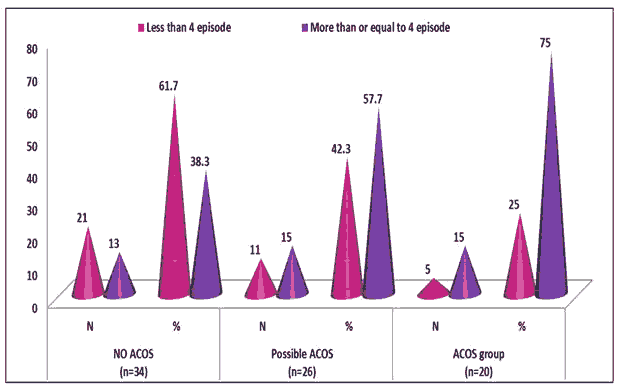 Figure 2: Comparison of frequency distribution of number of exacerbation of illness between groups in the study population.

Table 4: Comparison of means of various Baseline Pulmonary function tests between the groups in the study population.

Data are expressed as n with %. Fisher’s exact test was used to compare the frequencies between the groups. *indicates p<0.05 and considered statistically significant.

Table 5: Comparison of means of post beta adrenergic nebulization-pulmonary function tests for reversibility between the groups in the study population.

Data are expressed as mean with SD. One way ANOVA with Turkey Post Hoc test was used to compare the means. * indicates p<0.05 when compared to other groups and considered statistically significant.

Table 6: Frequency distribution of type of reversibility noted between the groups in the study population.

Data are expressed as n with %. Fisher’s exact test was used to compare the frequencies between the groups. * indicates p<0.05 and considered statistically significant. Among ACOS group 70% have no reversibility in lung function after bronchodilation and 10% have partial reversibility and 20% have reversibility. Reversibility is present in all asthmatics with no overlap patients. Menezes et al and Miravitlles et al observed that patients with ACOS had the lowest values for several lung function parameters.

Table 7: Frequency distribution of inference noted between the groups in the study population.

Data are expressed as n with %. Fisher’s exact test was used to compare the frequencies between the groups. * indicates p<0.05 and considered statistically significant.

53% in previously treated asthma and COPD combined population9. Our study which included chronically smoking asthmatics showed a prevalence of 25% of COPD overlap which is statistically significant. Only male patients with smoking history with 10 or more pack years were taken into the study. Duration of asthma was found to be a single independent factor associated with the development of COPD overlap in asthmatics in the study population. Asthma severity was found to have a strong correlation with the irreversible airflow obstruction. Severe persistent asthma was seen to be highly prevalent (64%) among the irreversible airflow obstruction [4]. This significant association is in accordance with the natural course of the asthma. Asthma over the years of progression leads to airway remodeling and thus leads to a decline of lung function and then leads to irreversible airflow obstruction. This decline in lung function manifests as severe persistent asthma. These patients had a longer duration of illness and thus a severe decline in the lung function. A similar consensus was reached in the study published by D. Bumbacea et al.

Prevalence of smoking among the irreversible airflow obstruction was high and statistically significant. This is although suggestive of additive effect to the asthma in the development of COPD overlap in asthmatics; it does not stand as an independent factor in the development of the irreversible airflow obstruction. Similar results were achieved in the study published by Alan .L. James et al. This study views smoking to have an additive effect in the disease pathology and also suggests that smoking has been associated with earlier onset of irreversibility of airflow limitation in asthmatics. Previous studies have shown that individuals with concomitant diagnosis of COPD and asthma incur higher health care costs and utilize more health care services and postulated that increased morbidity may have contributed to the greater utilization of the medical services in overlap patients [5].

• This study was done in only small number of patients. Study to be done in a larger population for much valid results.

• Female patients are not included in this study as patients with only smoking history was included. But female asthmatics with smoking history and/or exposure to noxious gases like bio mass fuel were also vulnerable in developing. So the results cannot be generalized to the entire population.