Diabetes mellitus is the most common endocrine disorder and takes on pandemic proportions. Worldwide, over 246 million people suffer from the disease in 2007 and estimates for 2025 are depicted at a total of 380 million patients. Diabetes mellitus (DM) is characterized by state of relative or complete insulin deficiency, leading to gross defects in glucose, fat, and protein metabolism. It is very unfortunate that India tops the list in diabetic population. World health organisation (WHO) estimates the diabetic population in India in 2000 is 31.7 million and in 2030 it is likely to rise to 79.4 million [1-3].

A wide variety of cutaneous infections m man are present worldwide in which the integuments and its appendages the hair and the nail are involved. Majority of the infections are caused by a homogenous group of keratophilic fungus called the dermatophytes. Dermatophytes are fungi that can cause infections of the skin, hair, and nails due to their ability to utilize keratin. The fungi are the commonest infective agent of man, and no group of people or geographical areas are without tinea or ringworm infection (tinea-latin for worm). Evolutionary development towards an accommodating host parasite relationship can be seen among the dermatophyte which is absent among other fungal agent of human disease. This group of disease is collectively referred to as dermatophytosis. The organisms colonize the keratin tissues and inflammation is caused by host response to metabolic by-products. These infections are known as ringworm or tinea, in association with the infected body part. Occasionally the organisms do invade the subcutaneous tissues, resulting in kerion development. The organisms are transmitted by either, direct contact with infected host (human or animal) or by Direct or indirect contact with infected exfoliated skin or hair in combs, hairbrushes, clothing, furniture, theatre seats, caps, bed linens, towels, hotel rugs and locker room floors. Depending on the species, the organism may be viable in the environment for up to 15 months. There is an increased susceptibility to infection when there is a preexisting injury to the skin such as scars, bums, excessive temperature, and humidity. Dermatophytes are classified as anthropophilic, zoophilic or geophilic according to their normal habitat. Anthropophilic dermatophytes are restricted to human hosts and produce a mild to chronic inflammation. Zoophilic organisms are found primarily in animals and cause marked inflammatory reactions in humans who have contact with infected cats, dogs, cattle, horses, birds, or other animals. This is followed by a rapid termination of the infection.

Geophilic species are usually recovered from the soil but occasionally infect humans and animals. They cause a marked inflammatory reaction, which limits the spread of the infection and may lead to a spontaneous cure but may also leave scars. Skin manifestations m diabetes mellitus are common and expressed in numerous forms. If one considers metabolic effects on microcirculation and changes in skin collagen, prevalence approaches 100%. Findings range from the Jesenting manifestations of the disease to signs of long-term involvement, and serious or even life-threatening problems. For all of these, recognition is the key to treatment and to prevention [4].

Non-Diabetic patients are also prone to dermatophyte infection because of their poor hygiene in low socioeconomic group and the environment they live in also plays as an etiological cause. The common dermatophyte encountered in non-diabetic patients is T. rubrum, T.mentagrophyte, M. gypseum. Superficial fungal infections of the foot (tinea pedis and onychomycosis) are common among elderly patients. Although most authorities believe that patients with diabetes mellitus have an increased predisposition to dermatophytic infections, some controversies remain. Because these infections disrupt the skin integrity and provide an avenue for bacterial superinfection, elderly diabetic patients with dermatophytic infection should be promptly treated with an antifungal agent. For most dermatophytic infections of the foot, topical agents are usually effective and less expensive than oral agents [5]. Recent studies show greater incidence of skin infections in diabetic patients. Incidence ranges from 20-50% [6], mostly in type 2 diabetes mellitus and often associated with poor glycaemic control [7]. Infections constitute the main bulk of cutaneous manifestations of diabetes mellitus [8].

The present study aimed to analyse the prevalence of common Dermatophyte’s infection in the diabetic and no diabetic patients.

Subjects chosen for the study were diabetic and nondiabetic patients attending Department of Dermatology of Sree Balaji Medical College and Hospital, Chrompet, Chennai. This is a cross sectional study from July 2011 to July 2012. Among those 40 diabetics and 40 nondiabetic Patients were included. Direct microscopy and culture of relevant samples were done.

• Patients with type 1 and type 2 diabetes.

• Both male and female patients.

All the diabetic and non-diabetic patients attending Dermatology OPD were explained the purpose of the study and the procedures involved. Skin scrapping, Nail clipping, Hair samples were collected after obtaining the written informed consent from them. The clinical material collected from the patients includes Skin scraping, Nail clipping, Hair from infected area Sabourauds cycloheximide and chloramphenicol medium were used for fungal isolation. The standard biochemical methods were followed for the analysis of the fungi from samples (Figure 1A to Figure 1C). The work represents a comprehensive study of the Dermatophytic infections in the Department of Dermatology and Central Microbiology Laboratory of Sree Balaji Medical College and Hospital, Chrompet, Chennai. A total of 80 cases of various types of dermatophytes were studied, diagnosed clinically, and confirmed by culture and other tests. Patients who were above 40 years were taken, which includes both male and female. Among these, 40 patients belong to Diabetic population, 18 females and 22 males were included, and 40 patients belong to Non Diabetic population which includes 21 females and 19 males (Table 1 and Figure 2). Out of 80 specimens collected, 64 were skin scrapings, 15 were nail clippings and 1 was hair sample (Table 2 and Figure 3A and 3B). 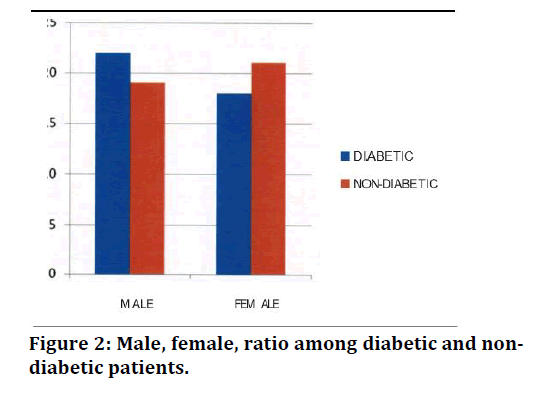 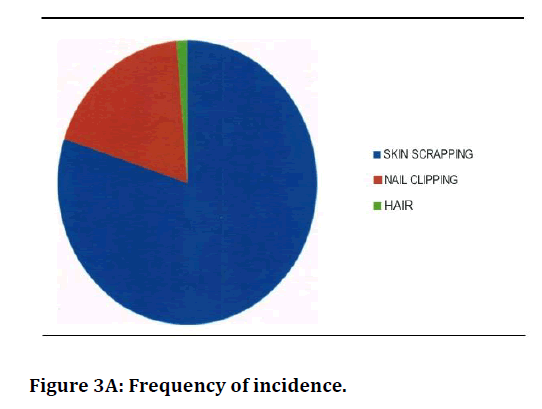 Figure 3A. Frequency of incidence. 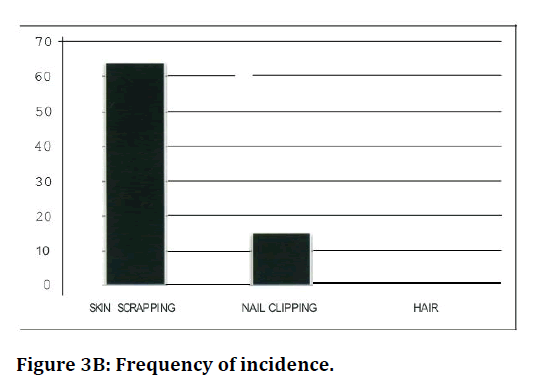 Figure 3B. Frequency of incidence.

Among the sampling sites, predominately, the fungal cultures were isolated from the skin (Table 3 and Figure 4) followed by nail and hair.

Table 3: Types of dermatophytes in diabetic. The most isolated Dermatophyte was Trichophyton rubrum (45%). On was Trichophyton menta grophyte (17.5%) followed by Microsporum gypseum (15 %), Epidermophy to floecosum ( 5%).7 samples didn’t' t have significant growth (17.5 %) (Figure 5). 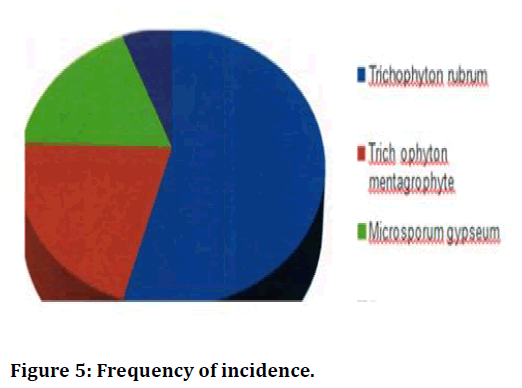 The most isolated Dermatophyte among Non-diabetic patients are T. rubrum (35%) and the next common was T. mentagrophyte (20%) followed by M. growth with 30%. 7 samples did' t have significant growth, with 17.5 %(Table 4).

Totally 32 patients were infected with 40 % of incidence among both Diabetic and Non-diabetic patients (Table 5 and Figure 6).

Table 5: Male and female ratio among diabetic and non-diabetic. 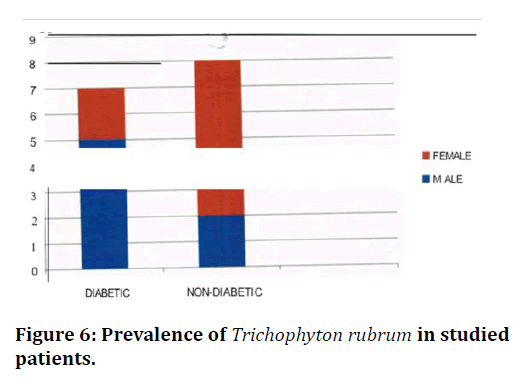 Chuku Aleruchi et al. [10] showed that males were more prone to get Dermatophytic infection than the females. The lower incidence in females may be because of the social stigma prevailing. Higher incidence in male may be correlated with the occupational hazards related to their nature of work, interaction with different people of the society, environmental vnditions also plays an important role such as hot and humid weather, poor personal hygiene and low illiteracy rate plays an important role in frequency of dermatophytosis in this part of the country which was observed by Kamalam et al. [11] and Nwadiaro et al. [12].

In this study patients above 40 years of age were taken from both diabetic and non-diabetic patients. Dermatophyte infection is more common above 20 years as shown in the studies of Sing et al., [13]. Dermatophytes require keratin for growth, they are restricted to superficial skin, hair, nail. This is the reason why they do not invade the mucosal surface. Some dermatophytes spread directly from one person to another (Anthrophillic dermatophytes). Others live in and are transmitted to humans from soil (geophilic organisms), and still others spread to humans from animal hosts. Transmission of dermatophytes also can occur indirectly from fomites (e.g., upholstery, hairbrushes, & hats). Anthropophilic organisms are responsible for most fungal skin infections. Transmission can occur by direct contact or from exposure to desquamated cells. Direct inoculation through breaks in the skin occurs more often in persons with depressed cell-mediated immunity. Once fungi enter the skin, they germinate and invade the superficial skin layers. The global incidence of onychomycosis 1s increasing and it continues to spread and persist as shown by several studies [14,15]. The higher incidence of dermatophytic infection in skin is because dermatophyte requires keratin for their growth as said by Barry et al. [16]. Out of the 40 diabetic isolates, 25 (62.5%) isolates belong to Trichophyton spp. of which T. rubrum was the predominate isolate (45%) followed by T. mentagrophyte (17.5%) In Kannan et al. [17] studies T. rubrum was the main isolate (81%).

The members of the genera of Epidermophyton spp. 2 of 40 (5%) and Microsporum spp. 6 of 40 (15%) accounted for lower percentage of infection when compared to J. hophyton spp. as in Kannan et al. [17], 2006 studies, where 2o-f Epidermophyton spp. 53 (3.7%) infections. Out of the 40 non-diabetic patients 14 of 40 isolates belong to T. rubrum (35%) remains the predominant dermatophyte followed by T mentagrophyte 8/40 (20%). Total number of Trichophyton spp. isolated accounts for 22(55%) followed by M gypseum which accounts for 6 (15%). In the non-diabetic group also Microsporum spp. accounts for lower percentage of infection when compared to Trichophyton spp. in Kannan et al. [17] studies. In an epidemiological survey of dermatophytosis in Tehran 2000 to 2005 Shahindokht et al. [18] have found that Epidermophyton floccosum accounted for 85% of the infections, which is the most prevalent fungal pathogen. In this study out of the 80 patients 32 isolates were T rubrum. T rubrum is the most common dermatophytic infection and this finding is confirmed by a study done by Suman S, Beena PM in Gujarat India, same finding was shown by a research work done by Suganthi in Chennai. The climatic condition, socioeconomic status, and the geographical location in which this part of Chennai falls prove to be an important cause for the higher incidence. Overall, 18 out of 32 patients were diabetic and 14 of 32 were non-diabetic patients. There is a higher prevalence of T rubrum in diabetic patients when compared to non-· diabetic patients.

Totally 12 isolates of M. gypseum were isolated from 80 patients. Among these 6 patients were diabetic and 6 were non-diabetic. 2 patients were male, and 4 parties were female among the diabetic, and 1 was male and 5 females in non-diabetic patients. Genus Microsporum contains several important species that are the principal causative agents of animal and human dermatophytosis 18 it is the most common cause for tinea and ringworm infection. This is usually found in children's and rural workers in warm humid weather, this may be the reason why there is a lower incidence of M gypseum in this study as the study population is more than 40 years of age.

The present study aimed to isolate the prevalent dermatophytes from diabetic patients compared to controlled group. The results revealed that the E. floccosum was predominate species in patients. T. rubrum showed approximately with 45 % isolation rate. The study concluded that those specific microorganisms should be considered on treating the patients. Their role influenced by the carbohydrate metabolism while systemic and local medical evaluation of the diabetic patients would be especially useful to neutralize the antibiotic resistance. On this aspect, the present study is opening a new door in diabetic related microbial treatment.