Materials and Methods: This study was conducted to determine the clinical and histopathological aspects of cutaneous malignancies of the patients attending the outpatient department of dermatology. This study is a retrospective with data analyses from cases attending the OPD from January 2020 to December 2020. The data was assessed according to the age, risk factors and histopathology.

Results: A total of 12 cases of cutaneous malignancies were diagnosed both clinically and histopathologically. Of the 12 cases, 4 were Basal cell carcinomas, 4 cases of squamous cell carcinoma, 1 case of cutaneous T cell lymphoma, 2 cases of acral melanoma and one case of angiosarcoma. Nodulo-ulcerative type of BCC was common in this study. In the case of malignant melanoma, acral lentiginous type was encountered in both our cases. Baso squamous type of SCC was commonly observed.

Conclusion: Though cutaneous malignancies are not very common in everyday practice, little suspicion must always be in mind when dealing with atypical cases and cases which are not responding to conventional methods and in doubt never hesitate to perform histopathological examination.

Skin cancers encountered in clinical practice range from basal cell carcinoma, squamous cell carcinoma, broadly grouped a non-melanoma skin cancers and malignant melanoma. Of these malignant tumors, squamous cell carcinoma is common in Indian subcontinent whereas in other parts of the world cutaneous melanoma is common. Skin cancers can arise de novo or more commonly due to chronic sun exposure, due to iatrogenic cause like PUVA therapy or any other immunosuppressant’s usage. Family history also plays a role in the development of cutaneous malignancies particularly malignant melanoma. The other malignancies like cutaneous T cell lymphomas are quite rare but an astute dermatologist can suspect and detect them at an earlier stage [1].

Squamous cell carcinoma can occur anywhere on the body from the squamous epithelium including skin and oral mucosa. Most commonly, the tumor arises from chronic sun damaged skin or from pre-existing dermatoses like actinic keratosis or other dermatosis like chronic scars and chronic non-healing ulcers [2]. Basal cell carcinomas can arise de-novo or can arise from chronic sun exposed skin surfaces like the face and the outer aspect of upper limbs. Additionally, patients with in borne error of DNA repair mechanisms like xeroderma pigmentosum, bloom’s syndrome and Rothmund-Thompson syndrome are predisposed to get cutaneous malignancies most commonly non-melanoma skin cancers [3]. Patients with connective tissue disorder like systemic lupus erythematous are also predisposed to get non-melanoma skin cancers.

There is a controversy in the role of UV rays in the pathogenesis of malignant melanoma. Chronic intermittent sun exposure increases the risk of superficial spreading type of melanoma whereas chronic sun exposed skin increases the risk of lentigo maligna melanoma [4]. Acral lentiginous melanoma is commonly encountered in dark skinned individuals.

The risk factors for angiosarcoma includes lymphedema either primary or secondary types or exposure to radiation therapy in cancer patients. Also, environmental factors are proposed in the pathogenesis. To analyse the importance of histopathological examination in the diagnosis of malignant tumours.

Data is collected from the following methods

Descriptive analysis will be done on the data collected.

• Both males and females

• Benign lesions of the skin. 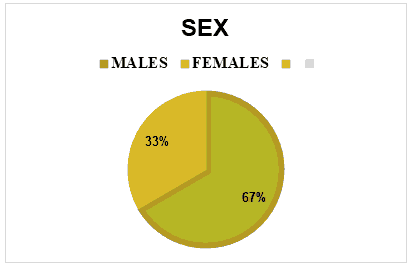 One case of cutaneous T cell lymphoma was diagnosed in a 52 years old female who had a fungating tumour over her right leg. Initially subcutaneous mycoses were suspected but the fungal culture and the special stains for fungus turned out to be negative. Biopsy was then suggested and the histopathology showed epidermotropism and other features of mycosis fungoides. Immunohistochemistry was performed and showed CD3, CD45 positivity confirming the diagnosis. The last case was a 64 years old male patient who had a proliferative lesion over the anterior aspect of the right lower leg. Differential diagnosis of squamous cell carcinoma and keratoacanthoma was considered. Histopathology was performed and the features like spindle shaped cells around blood vessels and dissecting collagen bundles was observed. Based on this, differential diagnosis of Kaposi sarcoma of endemic variant and angiosarcoma was considered. The patient tested negative for HIV and he had no other history of immunosuppression. To confirm the diagnosis, immunohistochemistry was performed and showed CD31, CD34 CD3 positivity and also ERG was positive. Since CD34 and CD31 are quite nonspecific, the positivity of ERG led us towards the diagnosis of angiosarcoma, (Table 3 and Figure 2).

Table 3: Predisposing factors for squamous cell carcinoma and its numbers 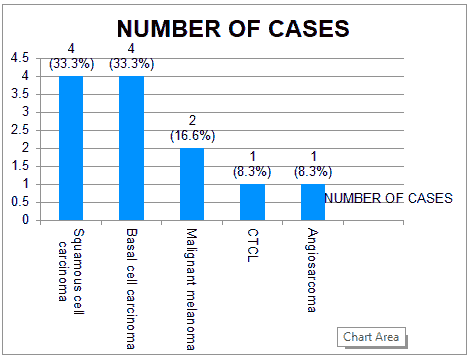 Figure 2:Graph showing the number of cases with the diagnosis.

The present study was conducted to find out the prevalence of cutaneous malignancies among the patients attending dermatology OPD. The mean age group of patients in this study was 60.9 years. The maximum age of patient in this study was 74 years male and the youngest was a 35 years old female. The male to female ratio in this study was 2:1(8 males and 4 females). The prevalence is almost similar to the study conducted by Khandare et al. [1] who conducted an observational study on clinicopathological study on cutaneous tumours. The study found that malignant tumors were common in the 7th decade [5]. Also reported similar distribution of tumors in males and females respectively (Figure 3). 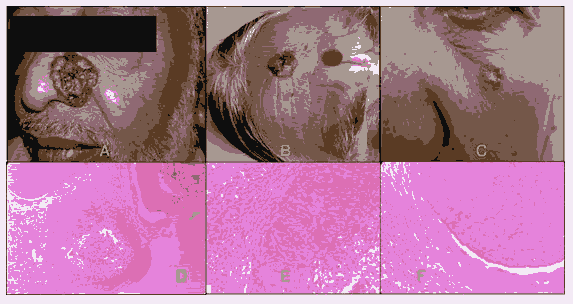 Among the tumours both squamous cell carcinoma and basal cell carcinoma was equal in prevalence as compared to malignant melanoma and other malignancies. Squamous cell carcinoma and basal cell carcinoma both contributed 33.33% of the malignancies, whereas malignant melanoma contributed to 17%, cutaneous T cell lymphoma and Kaposi sarcoma both was 8.3%. The age group affected by squamous cell carcinoma was mainly in the 5th to 7th decade; only one patient in her 3rd decade had SCC. This is in accordance to the study done by Adhinarayan et al. [6]. who reported that SCC is common in 41-60 years. The most common site of involvement of SCC was lower limbs followed by the lips and upper back in contrast to other studies which report non-melanoma skin cancers to be more common in the head and neck area. In our study SCC occurred in normal skin in one patient and in other patients it occurred secondary in other dermatoses like DLE, trophic ulcer and non-healing venous ulcer (Figure 4). 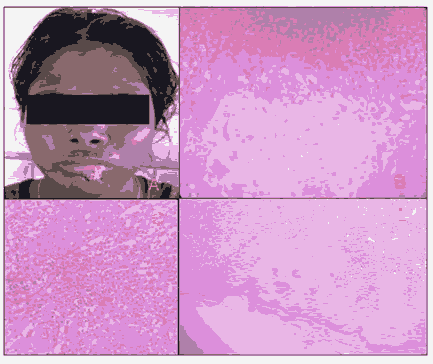 Basal cell carcinoma was present in 4 patients in this study, 2 males and females. The most common site was the naso labial area and forehead. This is in accordance to various studies which also report BCC to be most common in sun exposed areas. The age groups of the patients were in the 6th-7th decade which is also in accordance to various studies. There were no differences in the distribution of the tumour among both the sexes, (Figure 5). 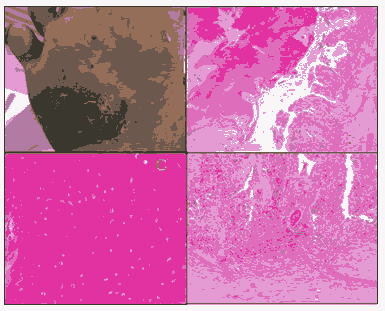 The nodulo-ulcerative type of BCC commonly termed as rodent ulcer was seen in 2 patients and the others had pigmented variant and superficial type. This is in accordance to the study by [7] who observed that BCC was most common in the elderly and the sun exposed sites were commonly involved. In this study BCC was found to be common in Fitzpatrick skin type 4 and 5 which is in contrast to the study in which it was common in Fitzpatrick type 1 and 2 skin. But the study also mentions that apart from skin colour, genetic predisposition, sun exposure can also contribute to the occurance of basal cell carcinoma (Figure 6). 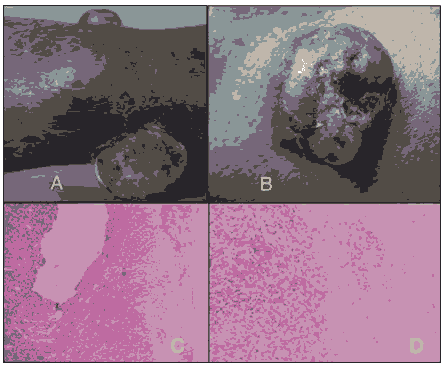 In this study, we encountered two cases of malignant melanoma, both were seen in males and acral melanoma was seen in both these patients. This is in accordance to various studies which mention that acral lentiginous type of melanoma is common in darker races and also carries a poor prognosis. One of the patients in this study had ulceration, which carries a poor prognosis and the size of the tumour was more than 2 cm in diameter with the base of the ulcer resting on the subcutis which is also a very prognostic factor. Immunohistochemistry was not done due to cost constraints. One case of cutaneous T cell lymphoma was diagnosed in a female, the initial diagnosis being deep fungal infections but the biopsy and immunohistochemistry confirmed the diagnosis of CTCL and after evaluation the patient was found to be having multiple metastases. She was referred to an oncologist for further management. One case angiosarcoma was diagnosed in an elderly male in this study. The initial picture was that of a fungating tumour like presentation giving the impression of squamous cell carcinoma but the histopathological analysis gave the differential diagnosis of Kaposi sarcoma and angiosarcoma. But immunohistochemistry findings led us to the diagnosis of angiosarcoma in this case. The case is quite unusual as angiosarcoma is common over the head and neck area in the elderly although it can develop at any sites which had lymphoedema and also previously irradiated site. Our patient had no other comorbidity apart from this lesion (Figure 7). 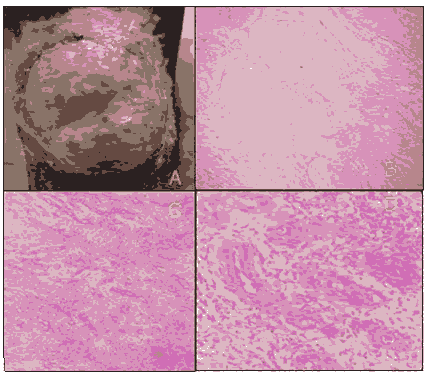 The study showed us that early diagnosis of these tumors can save the lives of many patients [8]. But the majority of patients present at a later stage where only palliation is possible. For example the case of malignant melanoma could have been detected at an earlier stage, instead he presented with advanced stage where the prognosis is very poor with a 5 years survival less than a year. The other malignancies like cutaneous T cell lymphomas are quite rare but an astute dermatologist can suspect and detect them at an earlier stage (Figure 8). 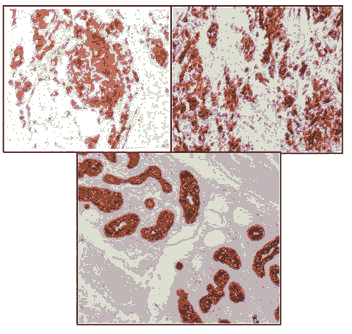 Though cutaneous malignancies are rare, it should be considered in the differential diagnosis of chronic nonhealing ulcers and dermatoses which are not responding to the therapies directed. In case of any doubt, as said by Garbe, never hesitate to perform biopsy, so that patient is also satisfied as well as the treating physician.