Objectives: The aim of this study is to investigate the effect of Nd-YAG laser of (1064 and 532) nm wavelength in modification of zirconia implant surface roughness in order to enhance the progress of Osseo integration.

Conclusion: Q-switched Nd-YAG laser of (1064 and 532) nm wavelengths can be used for modification of zirconia implant surface.

A. Stability of the prosthetic unit under normal functional loads.

B. An intimate coverage of an implant surface with newly formed bone without connective tissue interruption.

C. Lack of movement between the implant unit and surrounding supporting tissue.

D. The newly formed tissue on the implant surface must be identified as a normal bone on microscopic level [2].

The success rate of osseointegration is affected by several factors including surface roughness, surface chemistry and bulk material [4]. Cellular adhesion on implant surface considered as the main requirement for proliferation and differentiation of bone formative cells and for the stable anchorage of the implant unit with surrounding bone [5,6]. Cellular adhesion is affected by the surface roughness of the implant surface, which can enhance osteoblast proliferation, differentiation and matrix production [7]. The texture of the implant surface has an important role in tissue response against implant insertion. Rough surfaces have a larger area for anchorage with the surrounding bone, more tissue ingrowth is allowed when they compared with smooth surfaces [8,9], this clearly indicates that, implants with higher surface roughness indicated in case of poor quality and quantity of implant bed [10].

Zirconia as implant material now days considered as an alternative to titanium implant material. Because of several titanium drawback including, changes may occur on implant surface and alteration in composition and removal of oxide layer which may effect on the success rate of osseo integration. These changes may result in mucositosis, peri implantitis finally, bone destruction process ( osteolysis) which leads to implant loss [11].

Zirconia as an implant material has several mechanical properties making it a suitable alternative to widely used titanium including, high strength, hardness, corrosion resistance, and high fracture toughness [12,13]. From a biologic point of view, zirconia doesn’t exert any cytotoxic reaction when it comes in contact with biologic fluids [14]. Zirconia phases are classified into three phases, monoclinic, tetragonal and cubic depending on temperature [15,16]. The tetragonal phase is required in dental applications, it can be stabilized by adding other oxides like, (MgO),(Y2O3),(CaO) to prevent transformation to fragile monoclinic phase[17]. Partially stabilized tetragonal zirconia with 3 mol % Y2O3 is considered the material of choice as implant material [18].

The laser-based technique has been widely used in the modification of implant surface roughness instead of other traditional techniques. Since it considered as a fast, more accurate [19], minimum heat affected zone and no need for finishing procedures after processing [20,21]. The process of laser material interaction based on interaction of incident photons with the outer electrons of material constituents, which results in excitation of these electrons and return back to stable state within short period of time. This fact explains that heat generation takes place in very thin superficial layer of substrate material, also explains the cause of fast heating and cooling rates of laser material interactions [22].

In case of ceramic materials, laser material interactions considered more difficult than those of metallic materials. Since, in ceramic materials higher energy required for electrons excitation from valence band. So, short and ultra-short pulsed lasers with high peak power are indicated [22].

The absorption of the laser energy by the material is affected by optical and thermal properties of substrate material, it is also affected by laser parameters including, wavelength, mode of operation and power [26]. Absorption of laser energy cause heat generation on the workpeice subsequently desired effect. Heat dissipation into core material results in heat affected zone which may be present in form of cracks [27,28,29].

In laser material processing, the material can be removed by three different ways, melting, vaporization (both ways are categorized as thermal processing) and chemical degradation. In thermal way, the intensity of absorbed laser beam must be high enough to generate required thermal energy for melting and vaporization of the material. While in a chemical way direct bond break down takes place after absorption of incident laser beam [30].

The aim of this study is to compare the effect of two wavelengths of Nd_YAG laser (1064 and 532) nm using different exposure time, in the modification of zirconia surface roughness.

Q-switched Nd-YAG laser (DAESHIN ENTERPRISE) of (1064 and 532) nm wavelengths was used in this study. The samples were divided inti three groups. The first group was irradiated by (1064 nm) Nd-YAG laser by using same parameters (Energy Density and Frequency) except exposure time, as in following Table 1.

The diameter of laser beam used for this group was 5 mm. The second group was irradiated by Nd-YAG laser of (532) nm wavelength. The group of three samples irradiated by using same parameters (Energy density and Frequency) except exposure time, as in following Table 2.

The spot size in this experiment was 2.5 mm and the control group, without laser irradiation.

In this study, S.E.M. results reveal that the machined surfaces in both groups are free of micro-cracks. Several previous studies reported surface micro-cracks resulted from irradiation of zirconia surface by Nd -YAG laser (1064) nm (Figures 1-7) [31-33]. 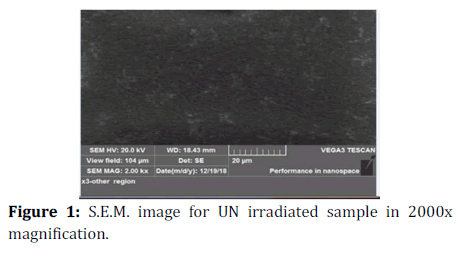 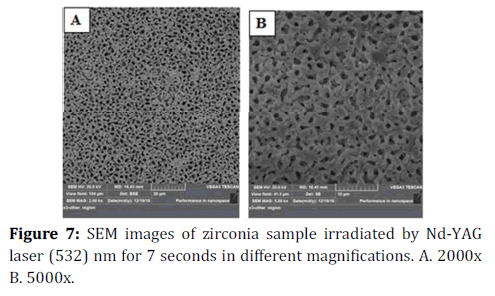 Using of laser in material processing is based on conversion of an optical energy into thermal energy after absorption of incident laser beam [34].

During laser material interaction, absorption of incident optical energy by electrons of substrate results in excitation of these electrons, after a specific period of time, these electrons tend to return back to stable state transferring their energy to surrounding atoms this timed is termed as electron – phonon relaxation time [35].

The pulse duration in case of pulsed laser processing has an important role in the final surface changes after laser irradiation. Since the pulse duration and heat affected zone are proportional. Long pulses related to heat dissipation deeply in core material resulting in larger molten material less vaporized [36].

Using lasers with pulse duration of nanosecond considered a preferable option in micromachining of ceramic materials than those of longer pulses because to get better results [37,38] this can be explained by following equation.

Greater peak power can be obtained with shorter pulses

Where ld is the thickness of heat diffusion layer D is diffusion coefficient factor.

From this equation it can be concluded that using long pulses results in heat dissipation into core material and less heat accumulation in absorption layer when compared with short pulsed laser, in which heat accumulation in absorption layer is more [36]. In case of nanosecond pulsed laser the mechanism by which laser beam interacts with substrate is photothermal including melting and vaporizing of material surface [40]. As mentioned above, in this study all irradiated sample of two groups are free of surface microcracks which is due to using pulse duration in nanosecond, heat accumulation in very thin surefacial surface layer raise the temperature to cause melting then vaporization of material.

Presence of scattered spots of molten material represents that the temperature there didn’t exceed melting threshold to reach vaporization temperature [42]. This indicates an inhomogeneous intensity distribution on irradiation area. Cross sectional S.E.M. imaging of the irradiated samples revealed that (Figures 8 and 9). From the cross sectional imaging, it appears that heat generation on the workpeice is un equal, which caused temperature raising to melting threshold in some areas and to vaporization threshold in others. The same finding where noticed in previous zirconia surface treatment by nanosecond laser [41,43]. S.E.M images of the group irradiated by Nd-YAG laser of (1064) nm wavelength shows presence of scattered surface droplets which considered due to vapor condensation [43]. As mentioned previously, the surface roughness of the zirconia samples irradiated by Nd-YAG laser of a wavelength 532 nm increased inspite of lower energy density used compared with that of 1064 nm. Absorption coefficient of the material plays an important role in determination of the depth of heat generation inside material.

Where ls is the thickness of the layer the absorbed energy initially penetartes and α is the absorption co efficient [37]. The absorption spectrum of zirconia indicates that zirconia is a good absorber material to (532) nm wavelength (Figure 12). 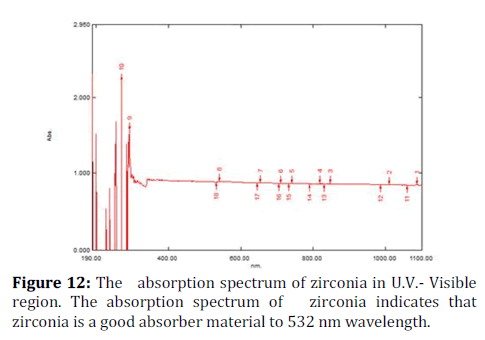 Institute of Laser for Postgraduate Studies, University of Baghdad, Iraq