Background: Non-surgical orthodontic expansion in an operated cleft lip and palate is an effective non-invasive treatment approach in an adult patient. Case report: This case report introduces a new approach of maxillary expansion for treating a severe maxillary transverse discrepancy in a skeletally mature patient. This approach uses a modification of quad-helix expander with reverse action to achieve expansion in the anterior maxillary region. An 18-year-old girl presented with a severe maxillary transverse discrepancy, straight profile, severe maxillary crowding and a Class III skeletal relationship. The treatment protocol consisted of maxillary expansion and active orthodontic therapy during the initial phase of treatment. A pre-activated Reverse quad helix expander was fitted; after the desired expansion was achieved, active orthodontic therapy was started. The treatment duration was 12 months 2 weeks. The good arch form was achieved after the initial phase of the treatment. Conclusion: This approach is a good alternative for treating a severe maxillary transverse discrepancy in a skeletally mature cleft palate patient and gain anterior expansion, which is more often desired in cleft palate patients and especially for a patient who does not want surgically assisted rapid palatal expansion.

Cleft lip and palate is one of the most common congenital defects having a long-lasting effect on the individual [1]. It causes difficulty in feeding, speech, function, esthetics as well as psychological problems. The etiology of cleft lip and palate is multi-factorial, with both genetics and environmental factors playing a part [2]. There is no clear statistics available for the prevalence of oro-facial clefts in Saudi Arabia. A study done in the Kingdom of Saudi Arabia showed that cleft palate was most commonly associated with a deformity in 56.8% of patients, followed by cleft lip with cleft palate in 32.9% and only cleft lip in 7.6% of patients [3]. However, an extensive literature review shows that the incidence of occurrence of cleft lip and/ or cleft palate varies between 0.03-2.6 per 1000 births [4].

Pre-surgical maxillary expansion is done most of the time before secondary alveolar bone graft procedure. Patients who undergo maxillary expansion prior to surgery are found to have successful outcomes as arch expansion allows better positioning of alveolar segments, provides more space and access for oral surgeons, corrects transverse and anterior discrepancy, and achieves good arch form for orthodontic alignment of the teeth [7]. Both Rapid Maxillary Expansion (RME) and Slow Maxillary Expansion (SME) are used in patients with cleft lip and palate. RME is commonly used to correct transverse deficiency [8].

Often, the goal of RME for many cleft patients has been to increase the anterior maxillary expansion and restrain the posterior expansion, since there is a greater anterior than posterior maxillary constriction in most of these patients. RME appliances that are commonly used include the Hyrax/ Hass type of expanders. SME appliances such as quad helix and modifications in quad helix are used for maxillary expansion. Both appliances produce significant skeletal transverse gains with negligible periodontal bone changes. Treatment time for SME, however, is longer than that observed for RME [9].

This case report described the technique of slow maxillary expansion using a novel modified quad helix [penta helix] appliance in an adult patient with unilateral cleft lip and palate and collapsed maxillary arch. The appliance was useful in bringing out anterior maxillary expansion more than posterior expansion in gaining proper arch form. The posterior segments were distalized, which aided in the appropriate alignment of the crowded anterior segment.

An 18-year-old female with a history of cleft lip and palate repair was referred to the orthodontic department at King Fahad medical city for management of collapsed maxillary arch and retro-gnathic maxilla. Clinical examination and radiographic examination using panoramic and lateral cephalogram (Figures 1-3) was carried out. The patient had left unilateral cleft alveolus with severe maxillary anterior crowding and palatally placed maxillary first premolars and congenitally missing upper second premolars. The upper right lateral incisor was buccally positioned and peg-shaped. The patient had heavily restored and compromised upper central incisors with a poor prognosis for long-term survival. The patient presented with bands being cemented on maxillary and mandibular molars, however, no treatment for them was initiated. 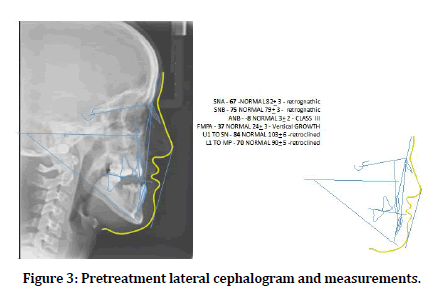 The treatment plan was divided into two phases: The initial step was to achieve anterior expansion, improve the arch form and get molars in a more favorable position in the arch to help in achieving good occlusion post orthognathic surgery.

The second phase consists of a further alignment of the maxillary arch by bringing impacted canine into the occlusion and prepare upper and lower arches for orthognathic surgery.

The treatment option available for the initial phase of maxillary expansion were surgically assisted rapid palatal expansion, RME using a fan-shaped expander, or using a regular quad helix appliance. These treatment options were presented to the patient; however, the patient refused to undergo surgical expansion. Also, the RME using a fan-shaped expander could not be used in this patient owing to the lack of available space in the anterior region. The regular quad helix appliance was unsuitable for this patient as there was the risk of further molar expansion. After careful consideration, it was decided to carry out anterior expansion using a novel modified reverse quad helix appliance to achieve the desired result.

✓ At 3 months assessment of initial progress of expansion, giving bends on primary arms using three prong pliers to give a distoposterior force did further activation.

✓ At 6 months of assessment, the patient presented with deboning of the appliance, which was recemented with further activation of the arms.

✓ At 9 months, the desired expansion was achieved; however, further residual crowding was present in the upper left quadrant. To resolve this crowding, a fixed appliance using the 0.022" slot pre-adjusted edgewise brackets were placed in the maxilla, and the levelling of the maxillary arch was initiated. Furthermore, coil spring activation was used to open the space to align the upper left lateral incisor and premolar.

✓ At 10 months follow up, the palatal appliance was separated from the premolar bands on both sides, and the reverse quadhelix was left in situ as a retention appliance. The upper arch was aligned using 0.012", 0.014" and 0.016" Nitinol wires.

At the end of initial phase treatment palatal appliance was removed completely and the patient was prepared for the second phase of treatment.

The comparison of the arches before and after expansion showed that the expansion achieved in the upper arch was satisfactory [Figure 4]. The inter premolar width increased from 15m-25mm, whereas the inter-molar distance between maxillary second molars actually decreased from 35mm-30mm. The appliance helped in achieving anterior expansion which is most desirable in these patients where the anterior segments are collapsed due to the presence of alveolar cleft.

Unilateral cleft lip and palate patients often present with increasing anterior constriction of the upper arch, which makes the transverse dimensions in the canine and premolar areas narrower, with the greater incidence of cross bites in this region. Along with cross bite, upper arch crowding together with the posterior cross bite is commonly seen in patients with repaired unilateral cleft lip and palate. However, extraction in the upper arch is seldom conducted due to the underdevelopment of the maxilla. Maxillary arch expansion is the most commonly used method for relieving crowding and the posterior cross bite in patients with repaired cleft lip and palate. Patients who undergo maxillary expansion prior to surgery were found to have successful outcomes [7]. It allows better positioning of alveolar segments along with other advantages such as better accessibility of the surgical site and achieving better closure of flaps post-surgery.

In this case, we used an innovative modification of quadhelix appliance to get the maximum anterior expansion and minimal posterior expansion. Following modified quad helix expansion, alignment with the pre-adjusted fixed appliance and use of coil spring to gain further space for crowded teeth resulted in significant improvement in the alignment of the maxillary arch. With this method of expansion with the modified quad-helix, expansion is mediated by buccal and distal rotation of the Premolars and the entire cleft segment in a readily observed manner due to the presence of a cleft in the premaxillary region. The alveolar cleft site (low resistance area) is gradually widened, minimally affecting the posterior maxillary segments. This appliance, along with a pre-adjusted fixed appliance, helped to achieve a good ovoid arch form allowing a better occlusal relationship.

The author's thanks to King Fahad Medical City, Riyadh, KSA (IRB Number: 19-334) for providing the facilities used to carry out this study.