Antioxidant and Antihypercholesterolemic Potential of Crude Aqueous Leaf Extract of Annona muricata: An in vitro Study

Herbs are always considered to be a natural source of antioxidant. Herbal extract and natural products are a part of folkloric medicine to cure various ailments for centuries together. One such herb which is a part of ancient medicine is Annona Muricata (A. muricata). It is a tropical plant species belonging to the family Annonaceae and known for its many medicinal uses. This study was conducted to assess the antioxidant and antihypercholesterolemic potential of aqueous leaf extract of Annona muricata. The plant Annona muricata was purchased in a nursery in Chennai. The plant was allowed to grow for a few days and the leaves were collected for study. The leaves were washed and crushed in mortar and pestle with water to prepare an extract. DPPH assay and NO radical scavenging assay were done to measure the in vitro antioxidant potential of the extract. Antihypercholesterolemic potential was also analysed. From the present study, it was observed that the aqueous leaf extract of Annona muricata possess a good level of antioxidant (78% inhibition at 500 μg/ml) and antihypercholesterolemic activity (60% inhibition at 500 μg/ml). Thus the extract can scavenge the free radical accumulation and prevent early onset of cardiovascular related disorders.

Annona Muricata (A. muricata) is a tropical plant species belonging to the family Annonaceae and known for its many medicinal uses [1]. Antioxidants are compounds that shield against and scavenge the accumulation of free radical produced in living system [2]. Annona muricata extracts have been identified in tropical regions to traditionally treat diverse conditions ranging from fever to diabetes and cancer [3]. Annona muricata belongs to the family Annonaceae and is commonly known as soursop leaves. It is widely distributed in tropical and subtropical regions of the world [4]. It is typically a tropical tree with heart shaped edible fruit. All parts of Annona muricata are used as natural medicine in the tropics including twigs, leaf, root, fruits and seeds. Annona muricata extract from its leaves produced lower systolic and diastolic blood pressure without an impact on heart rate. Annona muricata health benefits are skincare, prevents cancer and relieves respiratory distress [5]. The chemical investigation of free dried seeds of annona muricata lead to isolation of murisolin. A compilation of studies on the antioxidants in addition to clinical studies support hypoglycemic activities of the herb. Previous study research done has reported the hypoglycemic, anticancer, anti-inflammatory and antitumor activities of the herb [6].

Natural antioxidants from plant species have gained interest due to their protective effect against oxygen-derived from free radicals involved in the development of many diseases such as cancer and cardiovascular infections, arthritis, as well as degenerative illness such as Parkinson and Alzheimer disease [7]. Antioxidants are compounds that inhibit oxidation by scavenging the free radical, which tends to chain reactions that may cause cell damage to the organism. Antioxidants such as vitamin C and E are used to prevent cardiovascular disease. Cholesterol is found in tissues and plasma. Increased cholesterol levels are termed as hypercholesterolemia. High cholesterol level in blood can lead to coronary heart disease, stroke peripheral, high blood pressure [8]. Recent research proves that the release of these free radicals creates oxidative stress which has an immense effect in damaging the cells of the body leading to cancer. The use of synthetic antioxidants also directly affects the cells of the liver leading to carcinogenesis. Hence this plant extract is assessed for its antioxidant potential to reduce damage caused by the free radicals Cholesterol is the esterified form of fat. Cholesterol is essential for the human body in the synthesis of various steroid hormones to constitute the metabolism [9]. But increased cholesterol concentration in blood may lead to cardiovascular related complications. Therefore there is a growing interest in screening the plant extracts for this antioxidant and antihypercholesterolemia potential. The aim of this study is to analyses the antioxidant and anti hypercholestrolemic potential of aqueous leaf extract of Annona muricata.

The plant Annona muricata was purchased in a nursery, Chennai. The purchased plant was hardened in the garden and care was taken to grow the plant.

Leaves of Annona muricata were carefully removed from the plant. The leaves were washed, dried and crushed into powder with mortar and pestle. About 80 grams was extracted with water (1: 5 w/v) at 25 degree celsius for 24 hrs. The collected extract was centrifuged at 8000 rpm for 15 minutes. The aqueous extract was prepared and extracts were filtered using Whitman’s No 1 filter paper. Dried and stored in an airtight container at 4 degree celsius for further use.

Scavenging of 2, 2-Diphenyl-1-picrylhydrazyl (DPPH) radical was assessed by the method of Hatano. DPPH solution (1.0 ml) was added to 1.0 ml of extract at different concentrations (0.1 to 0. 5mg/ml). The mixture was kept at room temperature for 50 minutes and the activity was measured at 517nm. Ascorbic acid at the same concentrations was used as standard. The capability to scavenge the DPPH radical was calculated and expressed in percentage (%) using following formula:

Scavenging of nitric oxide radical was assayed by the method of Garratt et al. (1964). In the total volume of 3ml reaction mixture, 2ml of sodium nitroprusside, 500μl of phosphate buffered saline (PBS) were mixed with 500μl of different concentrations (0.1 to 0.5 mg/ml) of extract and incubated for 1 hour 30 minutes at 25°C. Then, 500μl of reaction mixture containing nitrite was mixed with 1 ml of sulfanilic acid and allowed to stand for 5 minutes for completing diazotization. Then, 1 ml of naphthyl ethylenediamine dihydrochloride was added, mixed and allowed to stand for 30 minutes at 25°C. A pink coloured chromophore is formed in diffused light. Ascorbic acid at the same concentrations was used as standard. The activity was measured at 550 nm and the results were expressed in percentage (%) using following formula:

The anti-cholesterol assay was carried out as described as per the kit method (Spin-react, S.A.UCtra Santa Coloma, Girona, Spain). Cholesterol was dissolved in chloroform at a concentration of 2.5 mg mL/ml. Ten microliter of the extract was pipetted into a microtiter plate followed by the addition of 2000 μL of R1 reagent and 10 μL of cholesterol as sample. Twenty microliter of distilled water and 2000 μL of R1 reagent were used as blank. Negative control consisted of 20 μL cholesterol and 2ml R1; standard consisted of 20 μL simvastatin and 2000 mL R1 reagent. The contents were incubated between 0-30 min at room temperature and the absorbance was read at 500 nm in a UV-Vis spectrophotometer against reagent blank. Anti-cholesterol assay of the extract was calculated using the following equation:

The data were subjected to statistical analysis using one-way analysis of variance (ANOVA) and Duncan’s multiple range test to assess the significance of individual variations between the groups. In Duncan’s test, significance was considered at the level of p<0.05.

From the results, it was evident that as the concentration of the extract increases there was a concomitant increase in both the antioxidant and anti-cholesterol potential of the herbal extract. Standard drug used for antioxidant activity was vitamin C (Ascorbic acid) and simvastatin was used as a control for anti-cholesterol activity The drug simvastatin belongs to the group of drugs called HMG CoA reductase [10]. 50% of inhibition in DPPH free radical scavenging was found to be achieved by vitamin C (IC 50) at a concentration of 0.23 mg/ml whereas the leaf extract of Annona muricata (IC 50) was able to show 50% inhibition at a concentration of 0.27 mg/ml (Figure 1). Antioxidant potential as tested by NO radical scavenging method also revealed a similar result with 0.25 mg/ml concentration (IC50) of the herbal extract exhibiting a 50% inhibition of free radicals as compared to the standard Vitamin C.(IC50) at a concentration of 0.23 mg/ml (Figure 2). Thus the antioxidant potential of the leaf extract of Annona muricata was almost similar to the standard (Vitamin C) used for the assay. Antihypercholesterolemic activity of the aqueous leaf extract of Annona muricata was tested and the drug simvastatin was used as a control. From the result, it was evident that 50% inhibition in cholesterol activity was shown at a concentration of 0.3 mg/ ml and 0.27 mg/ml for the herbal extract and the control simvastatin respectively (Figure 3). 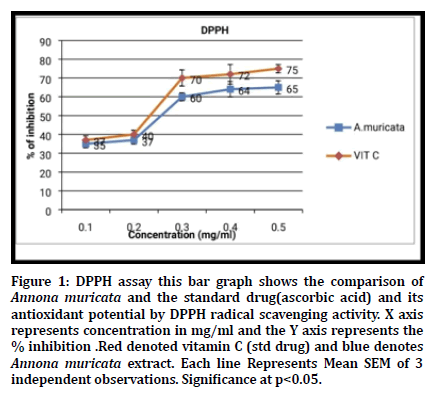 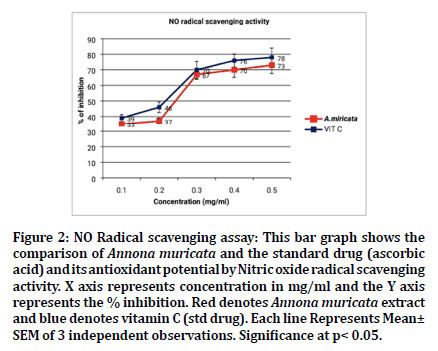 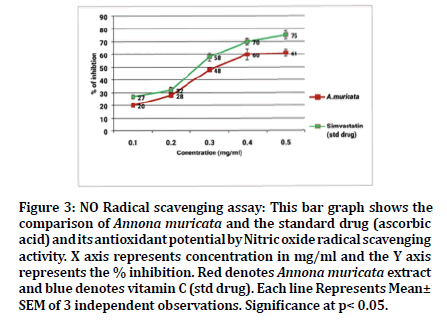 Antioxidants are compounds that inhibit oxidation. Oxidation is a chemical reaction which takes place in the body to produce free radicals. When this reaction is uncontrolled it damages the cells of the organism. Antioxidants like thiols or vitamin C terminate these chain reactions [11].

The term "antioxidant" is usually used for 2 entirely different groups of substances: industrial chemicals that are added to products to stop oxidation, and present compounds that are present in foods and tissue [12,13]. Antioxidant dietary supplements which are commercially available as tablets does not effectively enhance the oxidative health in humans [14].

Herbal extracts with a good antioxidant and radical scavenging potential can be tested for its anticancer potential, as the prime reason that leads to cancer is the decrease in radical scavenging potential and oxidative damage [15]. Earlier in vivo studies also prove that the increase in cholesterol concentration also leads to the decrease in the antioxidant activity, the reason behind can be an increase in lipid peroxidation. Even though there are many anti-cholesterol drugs like simvastatin, studies revealed that prolonged usage of these drugs may lead to other side effects like diarrhea, nauziness, rash skin, stomach cramps etc [16-18]. Therefore, it is very important to identify a natural herbal product which can act both as an antioxidant and anticholesterol agent. From the study results it was evident that the aqueous leaf extract of Annona muricata possesses a good antioxidant and anticholesterol activity. Further, extensive in vivo studies need to be carried out to prove the same.

The authors would like to acknowledge the help and support rendered by the Department of Biochemistry and Management of Saveetha Dental College and Hospitals for their constant assistance with the research.