Introduction: Therapeutic extractions are commonly performed for patients undergoing orthodontic treatment to achieve one or all treatment objectives as elaborated by Jackson’s triad. Although haemostasis can be achieved easily using conventional methods, a traumatic extraction techniques combined with various novel methods to control bleeding allow for minimal trauma to the investing tissues which is the prime concern in such cases. Hence, the aim of this study is to evaluate the efficacy of Light Emitting Diode (LED) curing lamps to cause photocoagulation of blood post extraction of teeth. Materials and Methods: The study included 20 patients who needed therapeutic extractions. They were divided into two equal groups namely control (Group A) and experimental (Group B). Conventional digital gauze compression was used in the control cases, while irradiation using Blue-Violet LED (Woodpecker i-LED) of the wavelength 420 ~ 480 nm, 1000mW/cm2 ~ 2500mW/cm2 for duration of 10 seconds was used for experimental cases. The time taken for bleeding of extraction sockets to arrest was noted. This data was tabulated and later statistically analysed using student t-test on SPSS 23.0 Student software. Results were drawn and conclusions were made. Results: The experimental group showed a shorter duration of bleeding as compared to the control group ie.12 seconds and 159.8 seconds, respectively. Experimental group was irradiated for 10 seconds in 80% cases, followed by 10 more seconds in 20% cases. Control group needed an average of 160 seconds for haemostasis performed by conventional method. Conclusion: Haemostasis can be satisfactorily achieved in systemically healthy patients using Blue-Violet LED curing lamp as the wavelength covers the absorption spectrum of haemoglobin (430 nm).

Light is a form of electromagnetic energy which has the dual characteristic of a wave and a particle (photon) [1]. Electromagnetic energy travels in waves and these waves differ from each other in their wavelengths. Higher the energy of the waves, shorter is the wavelength. Visible light spectrum lies in the wavelength ranging from about 390-700nm. Blue-Violet light has a wavelength of approximately 390-500nm, which corresponds to the highest energy waves in the visible spectrum [2].

Post-operative haemostasis in oral and maxillofacial surgery is a fundamental patient management issue [3]. Therapeutic extractions demand a traumatic procedures to be followed during the tooth extraction, as well as in the control of postoperative bleeding. Post extraction, the sockets are filled with blood immediately. Haemoglobin contained in the red blood cells absorbs the light in the visible blue-violet wavelength. Blue-Violet LED emits a specific range of wavelength (380-515nm) with two dominant peaks at approximately 410 and 470nm, commercially available for photo-polymerization of dental composite filling materials [4].

Immediately post-extraction the socket is filled with blood, which contains haemoglobin. Haemoglobin has the ability to transform light energy into heat energy at the interface of the bleeding surface thereby generating a thin amorphous layer lined by platelets and cellular elements. Hence, irradiation by Blue-Violet LED causes photocoagulation of blood in systemically healthy patients [5].

Considering the practical difficulty in using conventional gauze roll pressure technique for post-operative haemostasis in therapeutic extractions [6,7], i.e. the gauze fibres get entangled with the brackets which may lead to debonding and extraction in multiple quadrants, the efficacy of this novel method using light emitting diode in the visible Blue-Violet spectrum is going to be studied in cases requiring extractions. The aim of the present study is to evaluate if using the Blue-Violet LED for photocoagulation of blood post extraction is going to yield rapid and effective haemostasis in cases of therapeutic extractions.

A total of Twenty systemically healthy patients reporting to the Department of Oral and Maxillofacial Surgery, Saveetha Dental College and Hospitals, Chennai for therapeutic extractions were randomly selected and then matched for age, gender and distributed into two equal broad groups- one for receiving pressure roll gauze conventional technique of haemostasis and one for receiving Blue-Violet irradiation using LED curing lamp.

Extractions were performed under local anaesthesia LOX 2% (Lignocaine Hydrochloride, 21.3mg/ml, NEON Laboratories Ltd, India) containing 1:1,00,000 epinephrine. After extraction, the bleeding sockets were first gently wiped with a piece of gauze then irradiated from approximately a distance of 1 cm for 10 seconds in the experimental group and for another additional 10 seconds in which bleeding continued. The control group received pressure roll gauze for haemostasis.

The study used an LED device (Woodpecker i-LED) with wavelength in the range of 420~480 nm according to the protocol laid out by in-vitro studies and in-vivo studies conducted in Tokyo Women’s Medical University, Tokyo.

Bleeding time for both the groups was measured and recorded. Bleeding time was defined as the time needed to stop the post extraction bleeding from the socket after a gentle wipe with a piece of gauze. The patient was examined for post-operative healing after one week.

The mean age of the patients in the current study was 21. Mean age groups in Group A and Group B were 22 and 24 respectively. All the patients had been prescribed extraction pre orthodontic treatment and were apparently healthy with no systemic illnesses.

In Group A the patients had an average bleeding time of 13 seconds while the Group B patients showed an average bleeding time of 159.8 seconds. These results were statistically analysed using t test and the results were found to be statistically significant. ( P<0.0001) (Figure 1 and Table 1). The results showed that the use of a curing lamp to induce haemostasis had a positive result and was significantly better as compared to gauze pressure application using digits. 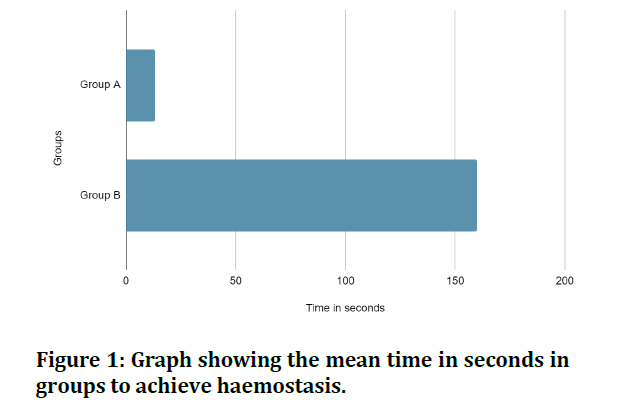 Figure 1: Graph showing the mean time in seconds in groups to achieve haemostasis.

Table 1: Table showing the mean duration of time to achieve Haemostasis in both the groups.

Vasoconstriction is the immediate first response of damaged blood vessels caused by the release of vascular endothelial factors, followed by formation of a platelet plug releasing cytokines (serotonin, thromboxane A2, and endothelin 1) [8-10] around the area of injury. These released factors (adenosine diphosphate, fibronectin, thrombospondin, fibrinogen, and platelet- derived growth factor) causes reinforcement of vasoconstriction and at the same time activates the platelets to adhere to each other. Exposed collagen and tissue factors initiate the clotting cascade which finally leads to the formation of a fibrin mesh which in turn stabilises the platelet plug thereby forming a mature clot [11,12]. The clotting cascade (also known as secondary haemostasis) is further divided into two pathways, the intrinsic and extrinsic pathway. Intrinsic pathway is activated by the exposed collagen, which binds to Factor 12 to initiate the cascade, extrinsic pathway is activated by Factor 7. The intrinsic and extrinsic pathway then converge into a common pathway. Common pathway involves the conversion of fibrinogen into fibrin under the influence of thrombin, forming the final mature clot [13,14].

After extraction the process of haemostasis is enhanced by application of digital pressure with gauze for 5-10 minutes. The normal range of bleeding time is from 2-5 minutes [15,16]. The bleeding is expected to stop from the extraction socket within this duration, but immediate haemostasis is needed when therapeutic extractions are performed due to involvement of all quadrants or two opposing quadrants [17,18]. There are various local haemostatic methods in oral surgery using passive or active agents. Passive agents allow for a framework where platelets can aggregate and form a stable clot while active agents are biologically active and participate in coagulation cascade for clot formation. Passive agents include collagens, cellulose gelatines and polysaccharide hemispheres. Active agents include thrombin and passive agents in which thrombin can be added to form an active agent [19].

Other methods include use of electro-coagulation to stop post extraction bleeding, which gives immediate results due to thermal effects. There is, however, a risk of loss of investing tissues like bone and soft tissues while using electrocautery [20,21], which is unacceptable in therapeutic extractions. To overcome this fallacy of electro-coagulation, laser coagulation was introduced, but they are known to cause thermal damage and carbonization of underlying bone when the bone is directly irradiated [22].

Blue-Violet LED curing lamps are used in dentistry for photo-polymerization of dental composites. Since LED curing lamps do not penetrate for more than 2-3mm into composites [23], it is now known that interaction at the surface causes surface condensation of proteins including haemoglobin, followed by coagulation. There is minimal harm to the surrounding tissues as seen with adjacent marginal gingiva in cervical caries restoration along with being a simple, safe and effective method of haemostasis. LED photocoagulation is also thought to accelerate periodontal repair and healing due to formation of a better coagulum, minimising alveolar bone resorption [24,25]. LED irradiation was used in patients under anticoagulant therapy (warfarin) in combination with gelatin sponge (Spongel), without the use of sutures to cause haemostasis, which allowed for platelet aggregation and improved clotting of blood. However, there needs to be further in- vitro and in-vivo studies to investigate the claims.

Furthermore, effects on orthodontic tooth movement post irradiation with LED curing lamps should be investigated. Effects of duration of exposure of curing light to the changes in clot structure should be evaluated ultra-structurally, to establish if there is any difference in normal coagulum and irradiated coagulum. To evaluate if irradiation of small bleeders during major surgical cases can be effectively controlled using this method.