Assessment of dental caries experience along with Streptococcus mutans, Streptococcus sanguis and Candida count among male tobacco users visiting a dental institute of Mangalore, Karnataka, India: A cross-sectional study
All submissions of the EM system will be redirected to Online Manuscript Submission System. Authors are requested to submit articles directly to Online Manuscript Submission System of respective journal.

Aim: The aim of this study was to compare the dental caries experience and count of Streptococcus mutans, Streptococcussanguis and Candida among tobacco users visiting a Dental Institute of Mangalore.

Materials and Methods: 75 subjects were taken for the study, from this 24 were tobacco smokers, 27 smokeless tobacco users and 24 were tobacco non-users. Dental caries experiences among these subjects were taken using DMFT index and their saliva was collected. Stimulated saliva was taken about 2.5 ml in sterile plastic container and sent to Department of Microbiology. Saliva was inoculated in MSA medium for mutans, sanguis and sabouround’s agar medium for Candida at 37°C. The Candida growth appeared in 48 hours as cream/white isolated colonies and mutans, sanguis growth appear in 24 hours as tiny light blue and large blue colonies which is counted using digital colony counter machine.

Out of 930 million global tobacco consumers 1.1 billion smokers live in developing countries; with India alone has 274.9 million tobacco users. World Health Organization (WHO) assessment estimated that by 2020 tobacco related death may exceed 1.5 million annually or 13% of all deaths in India [1].

Tobacco consumption is growing at the rate of 2%-3% per annum. India being a developing country and tobacco smoking is becoming the popular form of tobacco consumption in rural and urban population. Cigarettes and bidis (hand rolled cigarettes that contain unprocessed tobacco) then paan, ghutka and khaini, these varieties are most common forms of smoked and smokeless form of tobacco used in South India [2].

Tobacco is considered as a major risk factor for dental caries, oral mucosal lesions and adult periodontal diseases. Tobacco use suppresses the immune system’s response to oral infections. Smoking is considered as a major risk factor in the prevalence, extent and severity of dental caries. The noxious effects of smoke compounds justify the high incidence of periodontal diseases, caries and neoplastic diseases of oral tissues in smokers. Cross sectional studies have shown that smokers are twofold more likely to present with dental caries compared to nonsmokers [3].

Oral cavity harbors hundreds of different species of micro flora and when oral cavity is repeatedly exposed to tobacco for long time it presumably effects and brings about changes in these oral micro floras. Oral Candida carriage afflicted by tobacco use remains obscure till now. But it has been speculated that aromatic hydrocarbons in the tobacco smoke act as nutrients for Candida species thereby intensifying their growth [4].

1. To assess the dental caries experience among users and non-users of tobacco.

3. To compare the dental caries experience and count of Streptococcus mutans, Streptococcus sanguis and Candida among tobacco users and non-users.

A cross sectional study was conducted among the patients visiting Department Of Public Health Dentistry, AJ Institute of Dental Sciences, Mangalore, India. After obtaining ethical clearance from the institution, 75 patients were taken for the study which consists of 24 tobacco smokers, 27 tobacco chewers’ users and 24 nonusers within age range of 20-40 years.

Data related to the subject’s dietary habit (whether they are vegetarian, non-vegetarian or Mixed diet was only recorded), oral hygiene habits (only the brushing frequency, paste used and mouth rinsing habit was recorded) and tobacco history has been obtained after receiving informed consent from the patient. The duration of study was 3 months.

1. Subjects who gave the consent.

2. Subjects who were current tobacco users and having any type of tobacco related lesion were included in the study.

3. Subjects who were non-users of tobacco (A nonuser is a person who has not used any form of tobacco will be included in the present study).

4. Subjects who used tobacco only in smoked or in chewable form.

1. Subjects having less than 10 teeth in one arch and having history of major systemic disease or on antibiotic medication within 6 months prior to the study were excluded.

2. Subjects who used tobacco both in smoked and chewable forms.

3. Subjects who have undergone past oral prophylaxis.

The study subjects were divided into 3 groups:

Group C: Subjects who does not use tobacco in any form (non-users).

All micro biological analysis was done in Department of Microbiology, AJ Institute of Medical Sciences. 0.5 microlitre of each salivary sample was pipetted, inoculated and steaked on to mutans sanguis agar (MSA) plate. The plates were kept for anaerobic incubation in an incubator at 37°C for 24 hr. After incubation using a digital colony counter machine the number of colony forming units per ml for Streptococcus mutans and Streptococcus sanguis were identified.

All samples were centrifuged at 1700 rpm for 10 min. Now the supernatant was discarded and sediment material was carried with pipette and inoculated in Sabouraud's Dextrose Agar (SDA) media. The sample was streaked using inoculating loop and incubated in 37°C for 48 hours. The growth appeared in 48 hours as cream/ white isolated colonies which is counted using digital colony counter machine.

During this study we tried to analyze the number of persons affected with dental caries and having tobacco habit with certain dietary habit, oral hygiene habits and socioeconomic status. In this study a total of 75 subjects within the age group of 20-40 years were examined, out of which 27 were smokeless tobacco users, 24 were smokers and 24 were non-users.

Dietary and oral hygiene habit among the subjects

The mean DMFT among smokers were 4.63, chewers were 2.22 and non-users were 1.79 (as shown Table 1). The mean colony forming unit of Streptococcus mutans and Streptococcus sanguis among smokers, chewers and non-users were 46 × 104, 6.27 × 104, 3.85 × 104 and 10 × 104, 2.03 × 104, 1.3 × 104 respectively (shown in Figures 1 and 2). The mean colony forming unit of Candida among tobacco smokers, tobacco chewers and non-users were 1.3 × 102, 0.78 × 102 and 0.00 respectively (Figures 3 and 4). Thus from this study it can be inferred that smokers are having high prevalence of dental caries experience and growth of microorganism compared to chewers and non-users. Also in this study chewers showed little increase in dental caries experience compared to nonusers. Candidal growth was present among 13 of the smokers and 6 of the chewers who had presented with premalignant lesion (leukoplakia)/premalignant condition (oral submucous fibrosis) respectively and had poor oral hygiene habits. 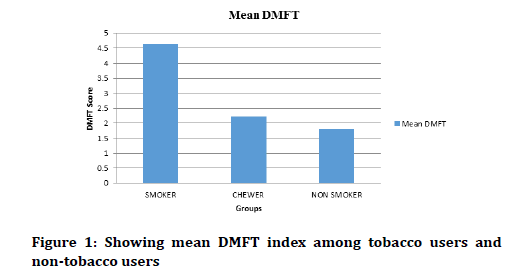 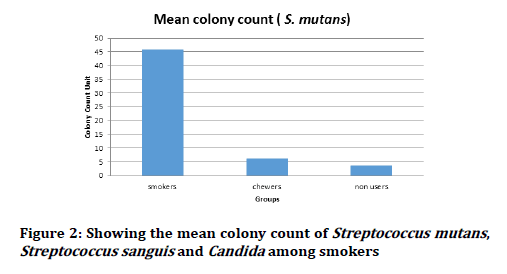 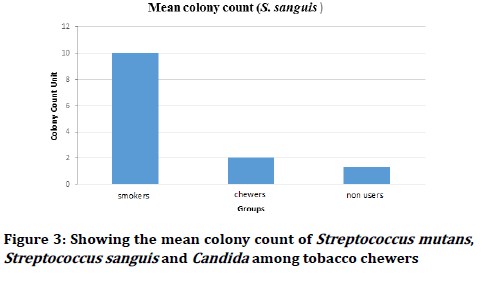 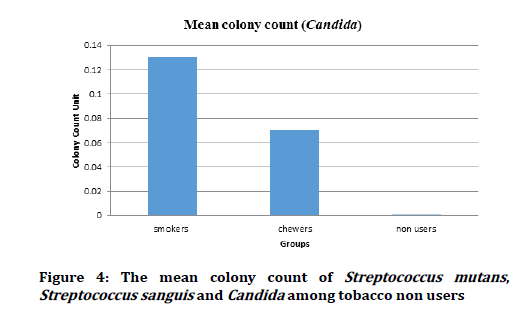 The dental caries experience was found to be significantly higher among tobacco smokers compared to chewers and non-users. This was in accordance with the study conducted by Zinser et al. [5]. They also correlated smoking habits of the subjects with poor oral hygiene for high incidence of caries. In a study of oral microbiota among tobacco chewers the Streptococcus mutans was found to be most prominent organism [6]. In the present study the dental caries experience among chewers were found to be slightly higher compared to non-users. The relationship between the use of smokeless tobacco and the incidence of dental caries has been controversial. Some studies have reported a low caries index among smokeless tobacco users and betel chewers [7,8], while there are also reports showing an increase in the incidence of cervical caries in smokeless tobacco users [9].

Some of the smokers have shown Candida growth who had a premalignant lesion i.e. leukoplakia and a few of the chewers have shown Candidal growth who had premalignant condition i.e. oral submucous fibrosis. According to Semlali et al. [11] cigarette smoke can lead to fungal infection and changes in its structure. Some studies have shown that Candida growth is seen more in smokers with systemic diseases such as diabetes mellitus [4].

There are a few limitations for this study, only few cases of Candida were seen. So from this, effect of tobacco on Candida cannot be inferred. The gender was not taken into consideration for effect of tobacco i.e. all the tobacco users were male patients. Another limitation of the study is that there was no significant difference between daily intake and duration of tobacco use between the subjects. A complete diet history was not taken which is an another limitation of the present study so that exact reason of the dental caries prominence in the smokers cannot be ruled out when compared to other groups.

Caries prevention can be achieved by increasing the resistance of the host, lowering the number of microorganisms in contact with the tooth and modifying various dietary and tobacco habits. In this research it was affirmed that tobacco smokers were at a higher risk of experiencing dental caries when compared to chewers and non-tobacco users. The present study also reveals that tobacco chewers have slightly higher dental caries experience compared to non-users but statistically not significant. This research has made an attempt towards understanding of tobacco habit’s association with dental caries. Further studies comprising of larger sample size of tobacco users and factors affecting dental caries are recommended. So within the limitations of this study, it can be concluded that there is a significant correlation between the smokers and increased growth of microorganisms (Streptococcus mutans, Streptococcus sanguis and Candida) among patients visited the hospital.