Assessment of Knowledge of GNM Students on STD/Aids in Karnataka

Since the 1980s, there has been a lot of debate around the origin of HIV. Here we discuss evidence about the origin of HIV, and find out how, when and where HIV first began to cause illness in humans. There are two types of HIV, known as HIV-1 and HIV-2, which have different origins and causes. The first AIDS case in India was detected in 1986and since then HIV infection has been reported in all states and union territories. India has the world's third largest population living with HIV/AIDS, with a prevalence rate of 2.3 million National AIDS Control Organisation / United Nations Program (NACO/ UNAIDS, 2007). This stigma and discrimination towards people living with HIV/STD it is high among health workers as well as the general population. Knowledge and specific information has an important role in HIV/AIDS prevention and the health workers have a central responsibility in prevention, care and treatment. Therefore it is important to assess knowledge and attitudes towards people living with HIV/AIDS among health professionals. Gained information can be used to direct educational programs. These infections may be spread through vaginal, anal and oral sex. There are at least 25 different STIs/STDs with a range of different symptoms. Most STIs or STDs will only affect you if you have sexual contact with someone who has an infection. However, some infections, for example scabies, are generally called STIs or STDs because they are most commonly transmitted sexually, but they can also be passed on in other ways (Figure 1). 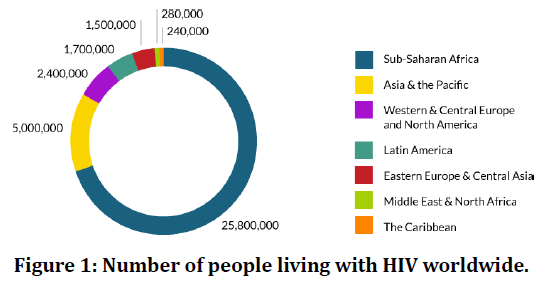 Funding the HIV response in India

Previously, efforts to tackle the HIV epidemic in India relied heavily on international funding. However, India has increasingly taken responsibility for financing its HIV response and in 2012, committed to financing 90% of its HIV and AIDS programmes. The vast majority (67%) of the NACP-III budget was spent on HIV prevention, with 17% going to treatment, care and support.

The future of HIV and AIDS in India

Over the past decade, India has made significant progress in tackling its HIV epidemic, especially in comparison with other countries in the region. For example, while new HIV infections have fallen by more than half since 2001, the number of new HIV cases in neighboring Pakistan has increased eight-fold. A major reason for the country's success has been the sustained commitment of the Indian government through its National AIDS Control Programme, which has been particularly effective at targeting high-risk groups such as MSM, sex workers and PWID. However, better HIV surveillance and targeted. A study in India to reduce HIV stigma among nursing students to assessing the involvement with regard to reduction of STD/AIDS related-stigma and discrimination have been documented. They explored nursing students’ perception about caring and communicating with HIV people in Greece and found discriminatory attitude to be prevalent among them. They reported 87% and 95% demonstrating intent to discriminate while dispensing medications and drawing blood, respectively. Furthermore and discriminatory attitude was found to be common among student nurses in Russia. A lack of STD/ AIDS-related stigma and discrimination reduction studies in the literature among student nurses in Nigeria has resulted in a knowledge gap. This study, therefore, focused on knowledge, attitude, and practice of HIV/ AIDS-related stigma and discrimination reduction among student nurses in southwest Nigeria.

This study was carried out for the assessment of Knowledge, Attitude and Practice of GNM Students on STD/AIDS in Karnataka. So this is an attempt to understand how well our student nurses are prepared to tackle the situations effectively, with Knowledge, Attitude and Practice they are ready to go to clinical and community area. In view of the magnitude of the problem, the investigator felt that it would be more suitable for the diploma nursing students and by improving the level of knowledge and practice, it would be possible to bring about desirable attitudes on STD/ AIDS [1-10].

A descriptive study approach and Cross sectional Descriptive design was used. The study sample size were selected from ten schools of nursing out of 300 schools of nursing available at Karnataka. In that III year diploma student alone consider as a samples based on the inclusion and exclusion criteria. The sample size of the present study compressed of 1000 from ten different schools of nursing. Each of four zones (eg: North, East, West & South) in Bangalore, Karnataka District. All 10 schools of nursing are run by private management Formal permission from the principal/ head of the institution was obtained after proper explanation regarding the study. Each school of nursing had different intakes, but among that only 80-100 students were selected in each school of nursing, meeting inclusion & exclusion criteria

Systematic non probability purposive sampling technique was adopted for the collection of data. Structure questionnaire format having two divisions Such as, section I – Demographic variables, section - ii Knowledge assessment tool, They provided separate room with all the facilities, so study went on comfortably. All ten institutions were well arranged and the schedule could be planned without any interruption. This also gave an opportunity for the investigator to assess the III year GNM student’s level of knowledge, on STD/AIDS. The entire programme went on well with good co-operation from students as well as management along with all the nursing and non-nursing faculty members.

Student who were willing to participate at time of study. Students of III Year GNM students at selected school of Nursing in Karnataka.

Who were selected for pilot study not included? The knowledge assessment tool contains section–I, in general information of knowledge aspects. Such as definition, causes, transmission and confirmation test. Section–II treatment includes window period, opportunity infections, symptoms, any vaccination, any treatment, universal precautions and screening of STD/AIDS. Section – III, The knowledge on risk of getting infection coughing, sharing clothes and other personal items, and section–IV, knowledge related to STD/AIDS contains spreading AIDS, HIV testing, anti-retroviral drugs and side effects.

In general the results show the level of knowledge among GNM students on AIDS / STD. I found three aspects of knowledge assessment as follows.

Table 1, reveals the distribution of GNM students' by have you attended the training on AIDS, the results revealed that that majority of subjects 92.0% were attended; lesser numbers only 8.0% were not attended. The reason for more attended is compulsory for the students and not attended was absence on the day.

The picture exhibits the distribution of GNM students' by where did you burse an AIDS patients, majority 93.5% of them were working at Government hospital, Private and Community hospital were 4.0% and 2.5% respectively. Data revealed that commonly found majority of them were posted at Government Hospital. The reason is STD/ AIDS is a developing problem and also communicable disease (Figures 2 and Figure 3).

Figure 2. Frequencies and percentage distribution of have you attended the training on AIDS among III yr. GNM students.

Figure 3. Frequency and percentage distribution of where did you nurse AIDS patients among III yr. GNM Students.

Table 4, shows overall level of Knowledge score among diploma nursing students. Majority of the subjects had moderate level 545(54.4%). 400 (40.0%) had inadequate knowledge, and (55)5.5% of them there was a need had adequate level of knowledge. Study results showed that update and improve the level of the knowledge on STD/ AIDS.

Table 5, depicts the domain wise mean and Percentage distribution of Knowledge Score. The study result shows that for general information of STD/AIDS having ten questions, the mean value is 5.38 (53.8%). Treatment related questions were twenty one mean values 10.37(49.3%). Fourteen questions from risk of getting infection had the mean values 6.39(45.6%). Eleven questionnaires were affecting with clinical infections showed 4.91 mean values with 44.6%, and related to STD/AIDS contained fifteen questions mean values 7.23(48.2%). The above findings revealed that there were good in general information of STD/AIDS get they had to expand their knowledge on other aspects of STD/ AIDS.

Table 6: Association between level of knowledge and their demographic variables N=1000.

Table 7, shows the association between level of knowledge and their clinical experience variables. Knows by all modes, training attended students, more than 2 days attended and 2 months before attended are having more knowledge than others. Statistical significance was calculated using chi square test.

Table 7: Association between level of knowledge and their clinical experience variables N=1000.

Major findings of the study

Overall level of Knowledge score among III yr. GNM nursing students. Majority of the subjects had moderate level 545(54.4%). 400 (40.0%) had inadequate knowledge, and (55)5.5% of them were adequate level of knowledge. Study results showed that update and improve the level of the knowledge on STD/ AIDS. The data revealed that commonly found majority of them had moderate level of knowledge, the reason was that they would have got the information about STD/AIDS through curriculum and Media. This association is compared to the level of knowledge, adequate knowledge was significantly less, majority of them were moderately significant. Because they are not adequately exposed to clinical field and allow to work with experienced people in field and their knowledge is widely updated due to exposure to mass media, internet and library and interaction with expert from field. The stated research hypotheses (H1) are not accepted.

Effective clinical management of HIV/AIDS clients/ patients will be achieved when the nursing practice area will provide opportunity for the nurses’ knowledge to all aspects regarding HIV/AIDS which reflect the following areas to be clearly understood by the practicing nurses: prevention for contracting HIV infection, natural history of HIV infection, application of the nursing process, counselling skills and confidentiality/stigma.

Nurses can plane for educational program me to create awareness on STD/AIDS to school children, because nurses are more responsibility.

Nursing education training in both nursing schools and on job training opportunities should aim at addressing effectively prevention for contracting HIV infection, natural history of HIV infection, application of the nursing process, counselling skills and confidentiality/ stigma, including provision of adequate information about the available drugs and their mechanism of action, side effects, measures to deal with reactions/ complications related to use of ant-retroviral drugs.

A wider range and extensive research study is needed to signify generalization of the findings which will provide opportunity for establishing appropriate measures aimed to ensure that nurses become equipped with adequate knowledge and skills pertinent for the clinical management of HIV/AIDS clients/patients.

Administrator can arrange for special funds for this programme.

• Who is available only included in this study.

• Samples only from final year GNM students, available at the time of study in selected schools of nursing, Karnataka.

• The investigator draws the following recommendations from the research study which would increases the knowledge, practice and attitude among GNM student nurses on STD/AIDS.

• The nurse investigator recommends the effective utilization of the knowledge, practice and attitude towards STD/HIV patients.

• The nurse investigator recommends the comparison of the knowledge, practice and attitude towards STD/HIV patients.

The study showed a fair level of knowledge among all health care professionals, with the highest knowledge among the doctors and the lowest among laboratory workers and a significant gender difference in the level of knowledge, though the data suggested that this did not differ by hospital settings. There were generally negative feelings and views about the care of HIV/AIDS patients across all HCP but worst at the CHC and best at the Government Hospital. The greatest source of information for the majority of professionals was health talks/ seminars, and those respondents who got their information from school scored the highest on the items on general knowledge of HIV/AIDS incidence, cause, transmission, and clinical treatment.

The encouragement and support from Bharath University, Chennai is gratefully acknowledged. For providing the laboratory facilities to carry out the research work.