Mammography is an energy-saving process for human breast diagnostics and X-ray screening. By detecting different masses or micro calcifications, mammograms usually detect early breast cancer [1,2]. Mammograms, like any x-ray, use imageionizing radiation. Images are then analyzed for unusual results. Compared to bone radiation, less energy is often used, typically Mo and Rh. Ultrasound is generally used for further mass evaluation in mammography or palpable masses [3-5]. The breast is placed on a flat support plate during a mammogram and is coated with a parallel plate. An x-ray machine causes a slight explosion of rays passing through the breast to the opposite sensor [6,7]. The detector can be either a photographic film platform that captures an X-ray image or a solid-state sensor that transmits signals to a digital image computer. The pictures are called mammograms. Low density tissue (e.g. fat) appears transparent on a film mammogram (e.g. dense gray shadow approaching the darker background); whiter appears on a gray background, dense tissue area, e.g. connective and glandular or tumor. Standard mammograms are at the top and side of each breast, although the suspected breast area may be further investigated [8-10]. A mammogram will be carefully examined by a radiologist for areas of high density that appear differently from normal tissue or unusual configuration areas. Many types of anomalies, including cancer tumors, non-cancer masses known as benign tumors, fibro adenomas, or complex cysts, may occur in these areas. Radiologists analyze the unusual size, shape, contrast and appearance of the region at the edges of the area (i.e. cancer). They also look for small pieces of calcium that appear to be very bright spots on a mammogram called microcalcifications. Although a specific type of cancer is usually benign [11,12], it is sometimes seen at a microcalcification site. If a mammogram has one or more suspected noncancer areas, a radiologist may order another mammogram view, with or without additional magnification or compression. Another type of non-invasive imaging study may be conducted. Breast cancer is the most common form of cancer in women. It can often be treated if detected promptly. The diagnosis of cancer of the breast is based on mammography. X-ray radiation is a radiation ionizer that may increase the risk of cancer in patients [13-15]. Given that the GT (acinar, canal epithelium and stroma) is a radiosensitive organ [16], the risk of mammographic tissue damage is an important way to study it. Dosimetrics for boobs [17,18]. Average absorbed dose of central glandular breast tissue (MGD). The 2018 ICRP states that MGD is best suited to radiation risk in the breast under the European Protocol. MGD is the average energy that is deposited in all breast glandular tissues per unit mass of glandular tissue. The MGD assessment assumes that the breast tissue is homogeneous [19-21]. Due to the low risk of cancer, the energy absorbed by adipose tissues and skin is not included in the MGD calculation. According to ALARA, the total absorbed dose in the glandular tissue should be kept as low as possible [22,23]. The IAEA also recommends that the 50 per cent glandular tissue and 50 per cent compressed breast adipose MGD be less than 3.0 mGy [24,25].

In this study, an X-ray generator (SIEMENS, Mammomat 3000) with a 23-50 kV tube potential was used. 650 mm Film Focusing Distance (FFD) and 3 combinations of filter and anode: Molybdenum/molybdenum (Mo/ Mo). Automatic Exposure Management (AEC) feature used in routine mammographic testing. Automatic selection of an appropriate combination of anode/filter/tube based on pre-exposure compressed breast thickness correlated with the position of the plate compression. Four combinations of different anodine/filter/tube compressed breasts. Out of 45 standard films, 300 women have received 60 films in our study. Extra 60° films have been obtained to clarify suspected or indefinite focal lesions or microcalcifications. After informed consent, further oblique films have been made (we explained to our patients the potential benefit of early cancer detection versus a small carcinogenic risk related to the additional exposure).

The sample of the study

Samples ranged from 50.3+5.1 to 44-62 years of age (p>0.05) to 300 patients in age groups. Patients in this study were 40, ranging from 46 to 63 years of age. Women with breast implants, prior lumpectomy and radiation therapy were excluded from the study. Using a computer model, we generated data that can be calculated for a range of conditions for tube output and a half-value layer under clinical conditions.

Using the computer model, we generated data to calculate the range of conditions for tube output and half-value layer under clinical conditions. The equations below are the same.

Where the entry was K to the Air Kerma surface, and g was the HVL-dependent conversion factor, the breasts were 50 percent glandular/ adiposous.

If K and g were the same as before, all 50 percent differences in breast composition were corrected by factor c and any difference in breast composition was rectified as the x-ray spectrum was used. Rh-Rh, Rh-Al and W-Rh are spectrum tables. A typical breast is calculated using the following formulation to calculate the glandular dose (GDD) equal to the PMMA thickness tested.

When K comes in, Kerma (back-scatter) on the upper surface of PMMA is calculated. Factor g is 50 percent glandular, with typical breasts being between 50 and 64 c.

Test data analyzed to detect importance between breast thickness and dose in the window. In this study, Table 1 and Figure 1 shows the patients. At a 60 ° angle, the mean time product (mA) was substantially lower than the 45 ° angle in Table 2. The average kilovoltage, as shown in Table 2, was lower at 60-26.4 vs 28.4, p>0.05. The mean 60-angle exposure was significantly below 45 angles: 0.74 vs. 0.82, p<0.01, as shown in Table 2. A 45° versus 60° dose of craniocaudal projection was observed in Table 3. Table 4 shows the estimated corrections for ESAK (mGy), ESD(mGy), MGD(mGy) and breast thickness (cm). Due to the risk of breast-related carcinogenesis, the estimated glandular average dose (MGD) and input surface dose (ESD) have been assessed in recent years. The study was conducted in Khartoum Hospitals, Sudan to evaluate Robson's mean glandular dose (MGD) and extra mammography dance variables. Patient's age, breast thickness, tube destination filter and exposure factors (mAs and kVp) (Table 5).

Table 1: The characteristics of the sample.

Table 2: The results of breast thickness, KVps, mAs and exposure in both Craniocaudal projections 45º and 60º angles, respectively.

Table 3: The assessed image spatial resolution of craniocaudal projections (45° versus 60°).

Table 5: The measured dose of Craniocaudal projection 45° versus 60°. 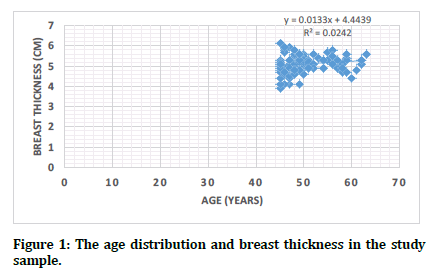 Figure 1. The age distribution and breast thickness in the study sample.

All demographic data and exposures amount were documented. Then those amounts were compared with the similar international scholars results such as [3,8,19,21,26]. Some scientists reimbursed the tube current in the tabulated exposure equations. While other scientists compared fixed exposure factors with variable breast thickness. This study was revealed that estimated dose in mammography was lower than the other studies such as [3,8,19,21,23]. This study was revealed also that usage of W-RH target tubes can give higher dose MGD and ESAK, respectively. In this study the authors estimate that breast radiation exposure was recorded indirectly with study results corresponding to 60° film differences. The kVp fixed protocol was used in both studies: constant tube voltage, mAs for varying breast width. Dong et al. [8] examined the kVp dose for the kVp protocol and identified a lower dose of thicker bridle radiation when using the kVp protocol. However by reducing the patient dose, we used a fixed kVp protocol and believe this should not affect image quality. We conclude that 60° films were produced with more compression than 45°, resulting in less product time and exposure to the same or better visualization.