Objectives: This study was done to find the association between QTc interval prolongation and microalbuminuria in patients of type II diabetes mellitus.

Methods: This cross-sectional study was conducted in SREE BALAJI MEDICAL COLLEGE AND HOSPITAL with 60patients of type 2 diabetes mellitus. A complete History and thorough clinical examination were recorded in these patients at the time of admission.

Results: Most of the patients were in 50 to 70 years of age group. There is a significant association between QTc interval prolongation and microalbuminuria as evidenced by a greater number of cases with microalbuminuria having prolonged QTc interval (67.76% Vs 24.13%, P<0.0001). Male to female ratio is 1.15:1.

Conclusion: There was a significant association between cardiac autonomic neuropathy (i.e. QTc interval prolongation) and microalbuminuria. Microalbuminuria doesn’t directly cause QTc interval prolongation, but it can be used as an indicator for patients who are prone to develop cardiac autonomic neuropathy and hence are at higher risk of having fatal arrhythmias.

India is the diabetic capital of the world. Diabetes is rapidly gaining the status of a potential epidemic in India with more than 62 million [1] individuals currently diagnosed with the disease. Most of the diabetic population is undiagnosed and even those who are diagnosed are not receiving proper treatment. People with diabetes have an increased risk of developing a number of serious complications including cardiovascular diseases, nephropathy, neuropathy and retinopathy etc. Diabetic neuropathy is one of the most common among the complications of diabetes. Yet, it is the least investigated and has a poorly understood pathogenesis. Diabetic nephropathy is a leading cause of diabetes related mortality and morbidity. Microalbuminuria is an early marker of glomerular diseases that has been shown to predict glomerular injury in early diabetic nephropathy [2].

It has been demonstrated that cardiac dysfunction can occur in diabetic patients without any evidence of ischemic heart disease, caused by Cardiac Autonomic Neuropathy (CAN) and this increases the risk of sudden unexpected death [3,4]. Prolonged QTc interval is found to be a specific indicator for CAN. For all cardiovascular mortality in type 2 diabetes, QTcmax was found to be an independent predictor. By virtue of early detection and therapeutic interventions such as physical training, weight loss, anti-hypertensives, and beta blockade the delirious effects of CAN might be reduced [5].

In type 1 diabetics, QTc interval abnormalities have been shown to be associated with microalbuminuria indicating the relation between Cardiac Autonomic Neuropathy and diabetic nephropathy [6]. But there are very few such reports in type 2 diabetes. The aim of this study is to evaluate CAN, as predicted by prolonged QTc interval and to check its association with microalbuminuria in type 2 diabetic patients and correlate it to the severity and duration of diabetes.

60 patients of type 2 Diabetes Mellitus attending Sree Balaji medical college and Hospital and were studied over a period of one year (January 2015 -January 2016). The study subjects are those who fulfill the inclusion and exclusion criteria.

All type 2 DM patients attending Sree Balaji medical college and Hospital over a period of one year.

From the selected patients detailed history was obtained and a thorough physical examination was done. History including age, sex, age of onset and duration of diabetes and details regarding presenting complaints were noted. Past history of any other disease is noted, the total duration of diabetes, drugs taken by the patients, regularity and dosage was also noted. A family history was taken. Personal history like smoking, alcohol consumption, drug intake was noted. Then, a complete clinical examination is carried out in each patient with reference to complications of diabetes.

The following investigations are done in these patients:

✓ ECG (To calculate QTc interval- Average of 3 QT and RR intervals from the leads where QT interval is easily identified to calculate this by BAZZET’s.

Most of the patients selected were between 50 to 70 years of age (Table 1 and Figure 1). 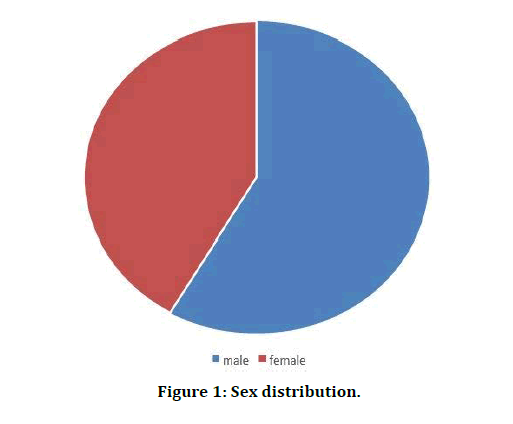 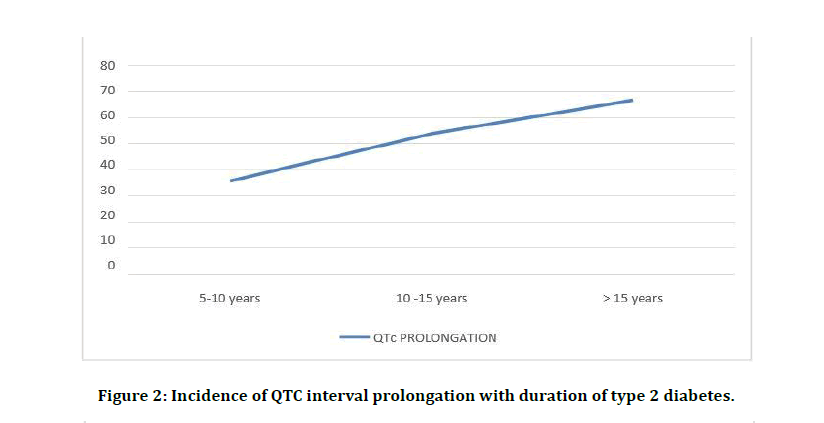 CAN is a frequent and life-threatening complication of type 2 DM. Failure to recognize this leads to high mortality and morbidity. Studies [7,8] have shown that prolonged QTc interval is an indicator of cardiac autonomic neuropathy. This is a simple, quick and non-invasive test for CAN. Many studies have also proven that diabetic nephropathy can be predicted by microalbuminuria. In our study we are finding the association between CAN (QTc interval prolongation) and nephropathy (microalbuminuria) in type 2 Diabetes Mellitus [9,10].

In our study, sex ratio (M: F) in QTc interval prolongation (CAN) is 1.15:1 which is lower than or equal to the study by Mathur CP, et al. [7] and Khoharo, et al. [13] which are 1.38:1 and 1:1 respectively. Our study, age of onset of CAN correlates well with other similar studies. In our study, mean age of onset of cardiac autonomic neuropathy is 62.14 years as compared to the study by Khoharo et al14 and Pappachan et al. [5] which are 53.62±8.3 and 53 years, respectively. In several studies [6,9,15] there is association of CAN with neuropathy and retinopathy. In our study, out of 20 cases of peripheral neuropathy, 16 cases had QTc interval prolongation (CAN) accounting to 80%, which is significant and out of 19 cases of retinopathy, 14 cases had QTc interval prolongation (CAN) which accounts to 73.68%.

Ethical approval: The study was approved by the Institutional Ethics Committee.