Smoking is one of the common recreational drug uses. Tobacco smoking habit has spread across the world, and is a significant cause of mortality and morbidity. Smokers are more likely to develop many deadly diseases such as cancer and other types of respiratory diseases. Tobacco smoking-related diseases have been shown to kill around half of long-term smokers compared with the overall mortality levels faced by non-smokers. A cross-sectional study was conducted by circulating the self-designed questionnaire among 100 college students. The questionnaire was designed to assess the data’s on demographics, smoking prevalence, smoking related knowledge and attitudes and health effects due to smoking habits. The survey was conducted through an online setting through a survey planet app. The responses from the study were analysed and represented in pie charts. The findings were 68% of individuals aware of the complications of smoking. Around 30% of individuals felt that the habit of smoking is greatly influenced by friends and stress. 92% of individuals felt that smoking in public places is an offence. 63% of individuals agreed that smoking affects appetite. The study concludes that students are well aware about smoking habits and its ill effects which cause major complications in their health. In addition, collaborative and more comprehensive anti-tobacco efforts are important to curb the tobacco epidemic.

Smoking is a major public health problem throughout the world. It constitutes the single leading cause of preventable death and disease [1]. In 1998, the worldwide mortality rate from tobacco-related diseases reached 4 million per year and is expected to reach 10 million per year by 2030. This is more than the estimated overall reported deaths from tuberculosis, malaria, maternal and other childhood conditions [2]. Smokers are at high risk of developing many physiological problems, as smoke inhalation inherently causes challenges. Tobacco contains nicotine, a type of alkaloid which can cause both stimulating and sedative effects [3]. Smoking causes minor defects like cough, wheezing, lung irritabilities and also major diseases like chronic obstructive pulmonary disease (COPD), emphysema and lung cancer [4]. Smoking has also been associated with oral complications, including dental caries, dental implant failure, premalignant lesions, and cancer. Smoking can affect immune-inflammatory processes that may increase susceptibility to infection; it may alter oral mycobiota and may encourage oral cavity colonization with fungi and pathogenic molds [5].

Chronic tobacco addiction in any form accounts for 1 in 10 deaths in adults, with one person dying every 6 seconds. Tobacco remains one of the most popular types of substance abuse, given its deleterious effects on life and health. More than 80 per cent of the estimated 1 billion smokers worldwide live in emerging or underdeveloped nations. Prevalence of smoking among women is comparatively less than male [6] in developing countries due to their cultural and religious norms. In fact women who smoke will evidence the gender specific health consequences, like reproductive defects [7]. On comparing the prevalence rate of tobacco smoking among rural and urban areas in southern india, (23%) prevalence is seen in rural areas followed by semi urban and (19.4%) seen in urban areas [8].

According to the World Health Organization (WHO), India accounts for 12 percent (about 120 million) of global smokers with the highest number of cigarette smokers registered in Jammu and Kashmir State [9]. Students had attributed many reasons to the use of tobacco products. These are the perceptions that smoking improved your appearance, relieved boredom and helped alleviate tension [10]. Previously our department has published extensive research on various aspects of prosthetic dentistry ‘Evaluation of Corrosive Behavior of Four Nickel– chromium Alloys in Artificial Saliva by Cyclic Polarization Test: An in vitro Study’, 2017 [11-21], this vast research experience has inspired us to research about the awareness of smoking habits among college students.

A self-designed questionnaire containing 15 questions was prepared and circulated to college students across Tamil Nadu through an online survey link. The survey included both male and female between the age group of 18 to 25 years. About 100 students participated in the study. The type of research was questionnaire study and the sampling method was simple random sampling. The questions assessed the awareness levels of smoking habits and its ill effects. Exclusion criteria were people of age group above 25 years. Statistics were analysed from the data collected. The responses and findings from the study were represented in pie charts. The Sampling method used was Simple randomized sampling method, the Independent variables are college students and Depedent variables are Knowledge, awareness, age and sex, the Statistics used were Descriptive statistics.

In this cross sectional study conducted among college students, we found that (67.2%) of individuals were well aware of the complications like emphysema (Figure 1). This finding was supported by [22], in which the rate of smokers experiencing symptoms of COPD was higher than the non-smokers. Around (12%) of individuals participated in this study felt that smokers have high risk of developing lung cancers [23]. In our study (67%) of individuals responded that they won’t feel free to smoke in public places (Figure 2). This finding was supported by [24], in which (84%) of current smokers replied that they avoid smoking in public places. 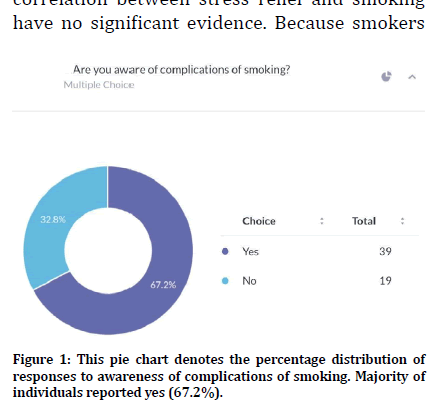 Figure 1. This pie chart denotes the percentage distribution of responses to awareness of complications of smoking. Majority of individuals reported yes (67.2%). 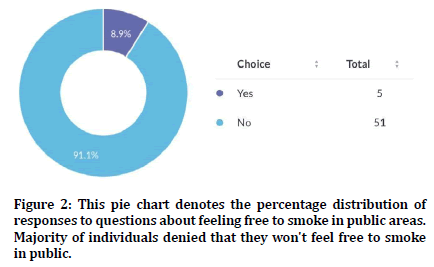 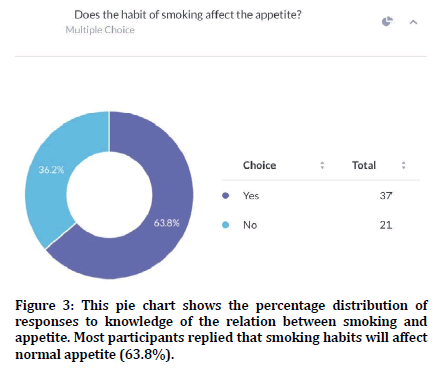 Figure 3. This pie chart shows the percentage distribution of responses to knowledge of the relation between smoking and appetite. Most participants replied that smoking habits will affect normal appetite (63.8%). 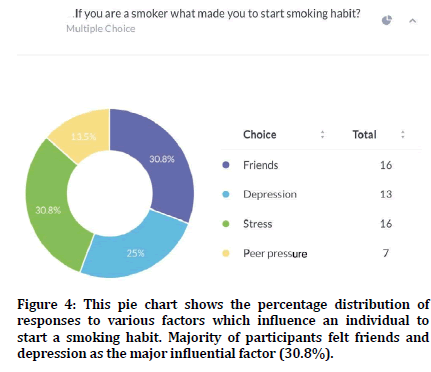 Figure 4. This pie chart shows the percentage distribution of responses to various factors which influence an individual to start a smoking habit. Majority of participants felt friends and depression as the major influential factor (30.8%). 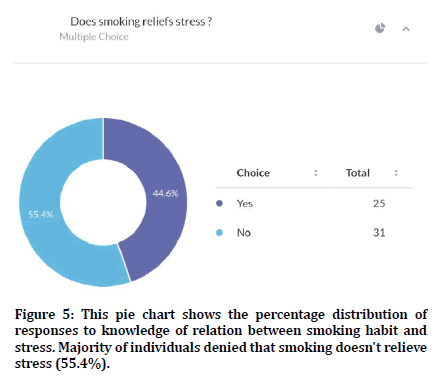 Figure 5. This pie chart shows the percentage distribution of responses to knowledge of relation between smoking habit and stress. Majority of individuals denied that smoking doesn't relieve stress (55.4%).

In our study, (69.6%) of students replied that they haven’t visited rehabilitation centers (Figure 6). A survey conducted in saudi Arabia among medical students, they found that (51%) of students agreed to quit smoking [27]. In our study, (61%) of individuals replied that mild smoking is not hazardous (61%) (Figure7). In a survey conducted among female students in Saudi Arabia university only (2.7%) of individuals replied as not hazardous [28]. 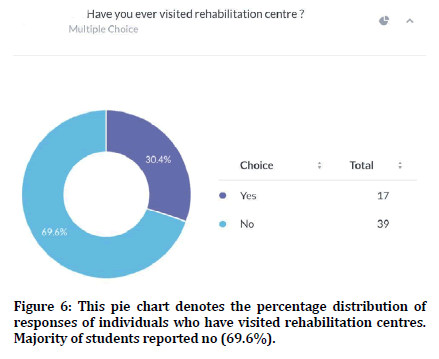 Figure 6. This pie chart denotes the percentage distribution of responses of individuals who have visited rehabilitation centres. Majority of students reported no (69.6%). 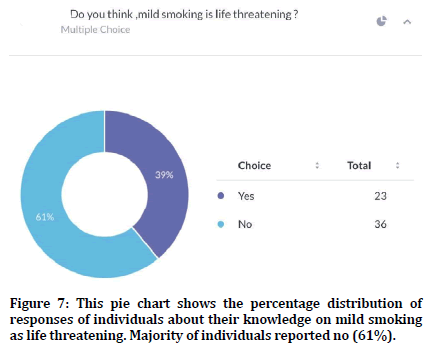 Figure 7. This pie chart shows the percentage distribution of responses of individuals about their knowledge on mild smoking as life threatening. Majority of individuals reported no (61%).

Despite the many bans, European countries still hold 18 of the top 20 spots, and according to the ERC, a market research firm, the heaviest smokers come from Greece, with an average of 3,000 cigarettes per person in 2007. Smoking rates in the developed world have decreased or declined, but continue to rise in developing countries [29]. Although there was a moderate level of awareness among the students and a good amount of knowledge about the health effects of smoking, this did not affect their smoking behavior. The backbone of health education remains to inform the public, particularly such a highly educated and influential group, about the health consequences of smoking. Better health knowledge alone, however, cannot curb the smoking epidemic, especially since the habit develops in adolescents when long-term risk may be of little concern and considered to be far away in future. The limitations of the present study were that only a homogeneous limited population is involved. Surveys on a larger scale will give precise findings. This research may not actually be reflective of young adults because it anticipates a socio-economic gradient between university students and the general population.

The limitations of our study include limited sample size, Homogenous population and regionalism. Overcoming which we can get more accurate and precise findings.

Almost all of the respondents were well aware of the consequences of smoking habits and this habit was not uncommon among students. Even though the awareness rate was found to be moderate, further awareness and prevention programs need to be conducted by the government. We suggest that findings from our study should be taken into account in anti-smoking program design. Our study gives positive hope that younger generations are well educated about smoking habits.

This research was done under the supervision of the department of research of Saveetha Dental College and Hospitals. We sincerely show gratitude to the corresponding guides who provided insight and expertise that greatly assisted the research.

The author has none to declare.