Self-protection and defence are an important factor for a girl ‘s life especially in today’s world. Girls face lots of problem even before they enter into teenage, they are restricted from doing many activities. Girls are thought to be courageous and are considered to belong to the weaker sex of the society. Self-protection and defence not only protect themselves from danger but also boost their self-confidence. Girls have the right to feel safe and to be safe where they live and learn. A lock, A light, A secure shelter-All these can prevent violence against girls in emergencies and provide a sense of security in a time of increased vulnerability and stress. Selfdefence is a protection, they need to be powerful with some act to defend themselves. Girls should be taught to defend themselves in all situations right from schooling. The aim of the study is to determine the awareness of self-protection and defense among teenage girls of south India. A questionnaire consisting of 10 questions was distributed through an online Google form link to about 125 teenage girls belonging to the age group of 13 to 19. The results were collected and analysed. Majority of the population was (about 78.4%) of teenage girls who agreed with the fact that self-protection is very much necessary and all aware of the cause. An awareness on self defence and protection was created among teenage girls by this survey.

Teenage girls are subjected to various kinds of problems which lead them to mental depression and insecurity. Girls have been bullied due to various reasons due to which they develop substance abuse sometimes. This depression makes them lose their self-esteem which can induce growth inhibitory effects on melanoma cells. Self defence is a countermeasure that invoice defends the health and well-being of ourselves from home. Teenage girls are highly addressed through experience sexual assault that Street at school and sometimes even at home. Self-defence techniques and recommended behaviour under the threat of violence is systematically taught in defence class [1,2], and has explained the benefits of ginger which can reduce stress in modulating in human epidermal keratinocytes. Nowadays self defence is a part of education according to the study of Resko we get the know that eve teasing is a worldwide complex problem and a social evil. We get to know through neighborhood girls are subjected to eve teasing. Not only urban areas but also rural areas to face this issue. Teenage girls have been subjected to this everywhere, like public places, shopping malls, public transport [3]. According to another study of Fiza Praveen, women need to learn how to sustain and fight back assault. Carrying weapons, executing crime prevention strategies and self defence skills are primarily needed for women. Women should be spiritually, physically and mentally sound enough to potential attacks [4]. Women have self-defence and personal protection concerns all around because of day to day violence increasing around them. This assault needs attention at both personal and community level, women now feel insecure even at families [5,6]. According to the study of holiander, Sexual violence prevention methods are being excluded from women’s self defence changing for various reasons, which include violence blaming [7]. The study of Priyaet al. explains to us that defence is regarded as the most important education that woman needs in the current living world. They are considered for easier targets for assault [5,8]. Many such assaults are being and unreported, which makes self defence necessary [9]. According to the study of Veena Shastri. As self defence is education and its importance for the woman to protect herself it is now being taught to many institutes as the course before graduation [10]. This is a big help to prevent any possible attack from happening [11]. Another study of Jesse Smith 2000, a powerful self defence training increases the global and physical efficacy beliefs [12]. According to the study of Bricklin 2008, in your future self defence training programmes will be implemented in research for evaluating and discussing about [11,13]. There are so many studies done with many diseases like cancer cells [14,15-19] and about the anti-diabetic drugs, respiratory disorders, and there are some specific studies [20-22] and [23-26] also been done by many authors. Though these topics are of high value in the scientific scenario, my interest is to study and analyse the current and basic situation. There is no previous investigating link between self-protection and defence.

The aim of the study is to create awareness about self-protection and defence among teenage girls of the South India population, to encourage them to sustain their livelity. There are many heads on topics like nanoparticles, cancer biology and all but we tend to forget basic protection for girls.

A survey was conducted with a self-prepared questionnaire comprising 10 questions.The sample size of the survey is 125 teenage girls of South India. The questionnaire was prepared with questions comprising all the awareness, practice, perception of the topic. The questionnaire was distributed through an online portal using Google forms. The responses were collected and analysed using the statistical software SPSS version 20. Chart analysis was carried out with the response recorded in the software and the result was represented using pie charts. Bar graphs were represented by using chi square tests.

The survey was conducted among teenage participants. The question was about the awareness of the necessity of self-protection and defence, a majority of 73% (Figure 1) responded that they were aware and 27% responded they were not. According to the previous study, they have explained about the awareness and importance of self-protection [27]. The next question was about the preference of going out (Figure 2) and about 66% responded yes and 34% responded (Figure 3), A majority of 70% respondents believed that India is a much safer place. According to a previous study [9], India has been mentioned as one of the safe places for teenage girls. When asked about the types of clothes which we wear, play a crucial role in bullying and about 59% responded yes and 41% responded no (Figure 4). The next question (Figure 5) included the importance of learning self defence art and protecting themselves from danger about 59% responded were ready to learn self defence and 41% respondent were not. According to the study of [5,11] they have explained about the importance of self defence and training and its importance (Figure 6). When asked about the travelling with elders 52% respondents wanted them to be accompanied by their elders. About 46% respondents wanted to carry self defence tools like pepper spray and petty knives with them (Figure 7). According to the study of Umesh Gadekar et al. they discussed carrying protective tools like that pocketknife to protect women from danger. The next question asked about the preference of taking cabs alone and about 25% responded yes and 75% respondent not thus indicating the fear to travel long distances alone still exists among teenage girls (Figure 8). When asked about learning self defence, out of 125 participants , all the participants (Figure 9) all 13 and 14 years old were interested in learning ,whereas 9 of 15 years old, 1 of 17 years old , 7 of 18 years old, 18 of 19 years old were interested. Age has an influence in the way a person can think. When asked about their view on whether India is safe for teenage girls, out of 100 participants , all the participants of 13 , 15 and 16 years old strongly believe India as a safe place ,whereas there was mixed opinion among 17, 18 and 19 years old. All the participants who were 14 years old strongly believe that India is not safe for girls (Figure 10). The world is heading towards lots of scientific discoveries and researches. Changes are the only aspect which is consistent throughout the world. Even, in this fast and furious world, there are certain things, which can never be neglected. One such thing is the safety of teenage girls. It is time to create awareness and teach the role of each one to protect and safeguard the girl child. This survey has created an awareness on the importance of self-protection skills to be learnt by teenage girls to protect themselves. 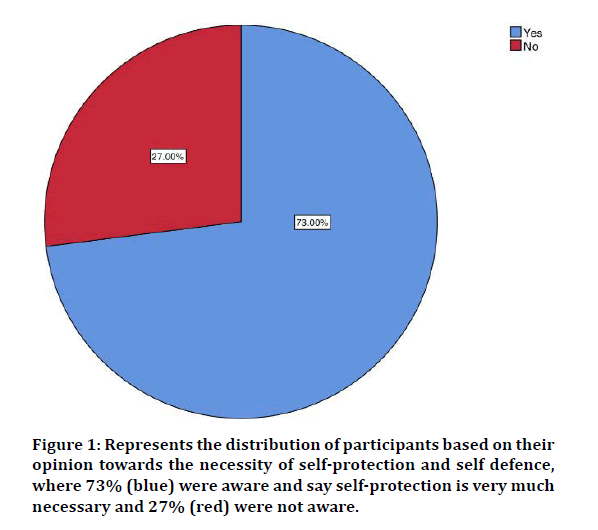 Figure 1: Represents the distribution of participants based on their opinion towards the necessity of self-protection and self defence, where 73% (blue) were aware and say self-protection is very much necessary and 27% (red) were not aware. 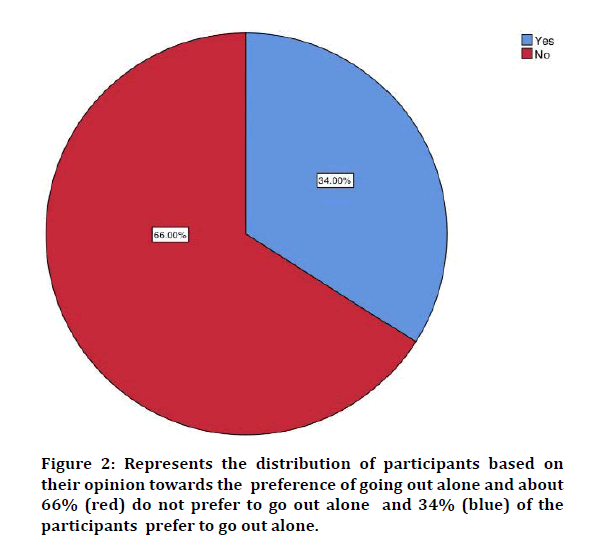 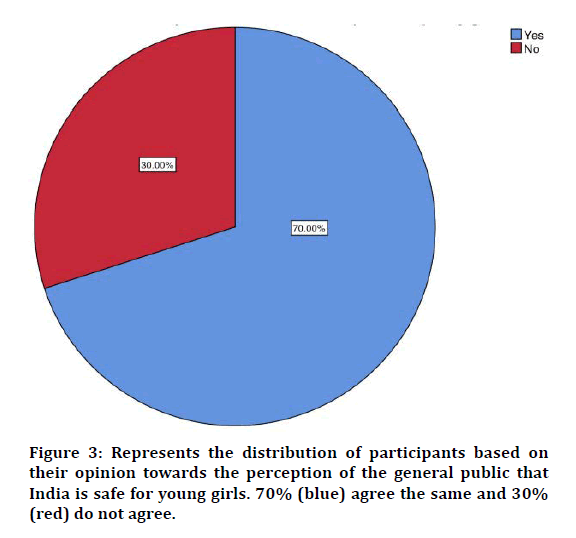 Figure 3: Represents the distribution of participants based on their opinion towards the perception of the general public that India is safe for young girls. 70% (blue) agree the same and 30% (red) do not agree. 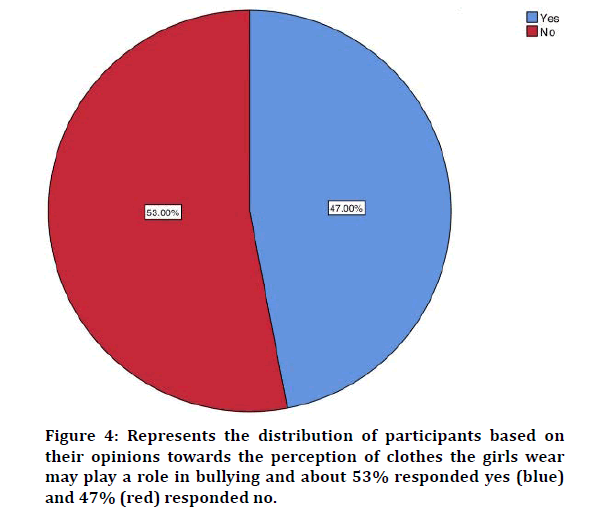 Figure 4: Represents the distribution of participants based on their opinions towards the perception of clothes the girls wear may play a role in bullying and about 53% responded yes (blue) and 47% (red) responded no. 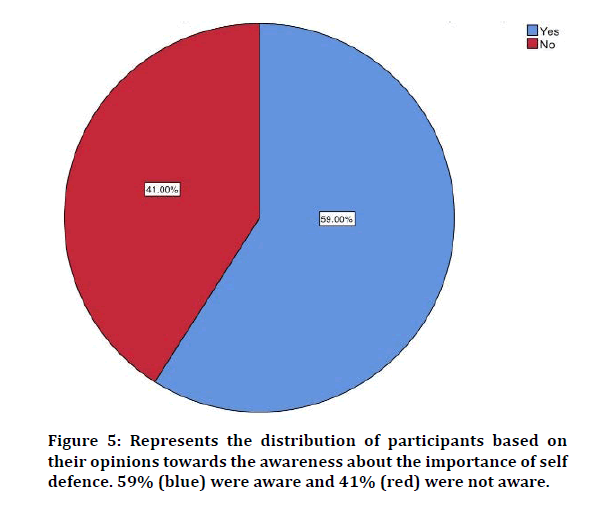 Figure 5: Represents the distribution of participants based on their opinions towards the awareness about the importance of self defence. 59% (blue) were aware and 41% (red) were not aware. 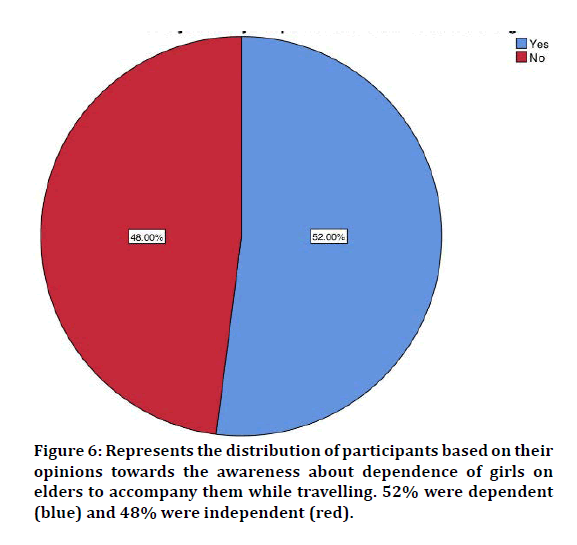 Figure 6: Represents the distribution of participants based on their opinions towards the awareness about dependence of girls on elders to accompany them while travelling. 52% were dependent (blue) and 48% were independent (red). 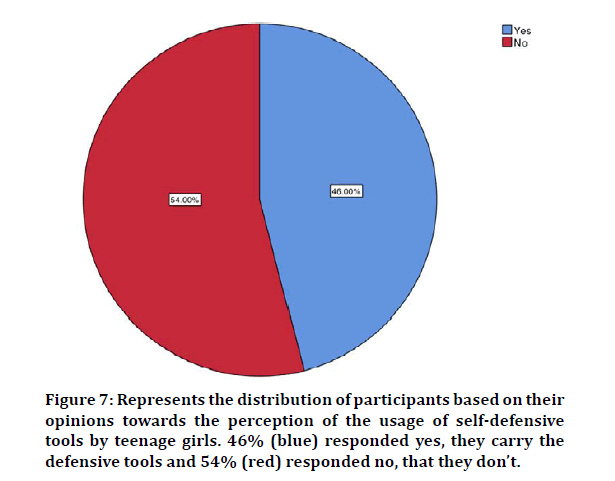 Figure 7: Represents the distribution of participants based on their opinions towards the perception of the usage of self-defensive tools by teenage girls. 46% (blue) responded yes, they carry the defensive tools and 54% (red) responded no, that they don’t. 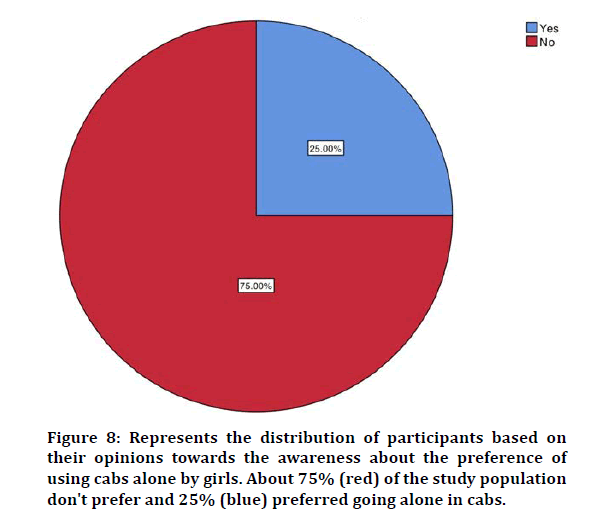 Figure 8: Represents the distribution of participants based on their opinions towards the awareness about the preference of using cabs alone by girls. About 75% (red) of the study population don't prefer and 25% (blue) preferred going alone in cabs. 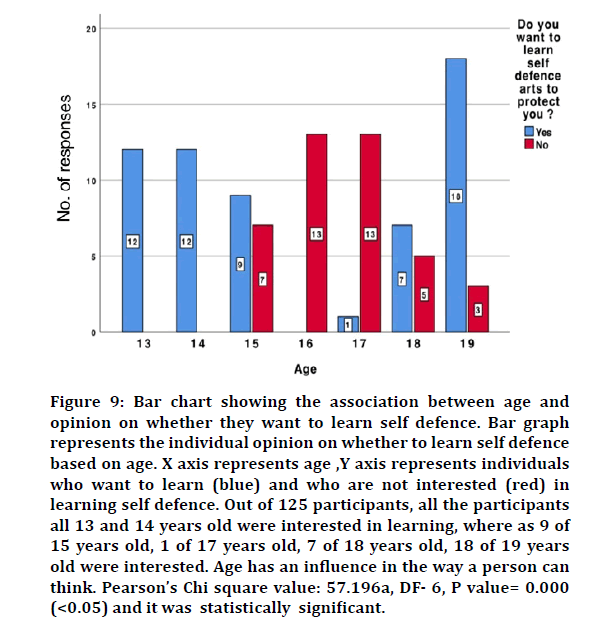 Figure 9: Bar chart showing the association between age and opinion on whether they want to learn self defence. Bar graph represents the individual opinion on whether to learn self defence based on age. X axis represents age ,Y axis represents individuals who want to learn (blue) and who are not interested (red) in learning self defence. Out of 125 participants, all the participants all 13 and 14 years old were interested in learning, where as 9 of 15 years old, 1 of 17 years old, 7 of 18 years old, 18 of 19 years old were interested. Age has an influence in the way a person can think. Pearson’s Chi square value: 57.196a, DF- 6, P value= 0.000 (<0.05) and it was statistically significant. Figure 10: Bar chart showing the association between age and opinion on whether they think India is a safe place for girls. Bar graph representing the individual opinion on whether they think India as a safe place for girls based on age. X axis represents age, Y axis represents individuals who think India is safe (blue) and who do not think India is safe (red). Out of 100 participants, all the participants of 13, 15 and 16 years old strongly believe India as a safe place, whereas there was mixed opinion among 17, 18 and 19 years old. All the participants who were 14 years old strongly believe that India is not safe for girls. Age does have an influence on the general opinion and perception. Pearson’s Chi square value: 53.968a, DF- 6, P value=0.000(<0.05) and it was statistically significant