Materials and Methods: The EEG tracing was recorded from eight healthy right-handed volunteers according to the standard international 10/20 system, using PowerLab 26T (AD Instruments, Bella Vista, Australia) before and after wet cupping therapy. Wet cupping was performed only once per person on 5 points of the posterior neck, bilateral perispinal areas of the neck, and thoracic spine. 3 ml-5 ml of blood was removed per cupping site.

Results: In the present study, both beta and gamma activities were significantly higher after wet cupping therapy, compared to the activities of these oscillatory waves recorded before therapy.

Wet cupping therapy (also known as Al-Hijamah) is a percutaneous pressure- and size- dependent non-specific blood filtration technique that enables the excretion of pathological substances through the fenestrated skin capillaries upon application of negative suction pressure using sucking cups [1]. This complementary therapy has been reported to treat many diseases of differing etiology and pathogenesis [1]. For example, wet cupping therapy has been shown to clear toxic substances such as heavy metals from blood and interstitial fluids [2-4]. Wet cupping therapy has been successfully applied to treat other human maladies, including atherosclerosis, hyperlipidemia, hypertension, coronary heart diseases, gout, hepatitis, and thalassemia [5]. Study by Shekarforoush et al. [6] on animals has also shown promise of application of this therapy in life threatening cardiac diseases [7,8].

This complementary therapy may have positive effects on brain functions. However, the effect of wet cupping therapy on cortical functions as recorded with electroencephalogram (EEG) in healthy humans has not been reported. The EEG is a non-invasive recording that is used to study cerebral activities in health and disease. The EEG waves are the result of action potentials and multiple excitatory and inhibitory postsynaptic potentials mostly of the neurons of the subcortical and cortical regions of the brain [9-11]. The major EEG waves are delta or δ, theta or θ, alpha or α, beta or β and gamma or γ frequency bands. These frequency bands represent cerebral signal processing in sensorimotor and cognitive domains [9,12,13].

The experimental protocol was in line with the Declaration of Helsinki and approved by the Research Ethics Committee/Institutional Review Board (REC/IRB) on the Use of Human Subjects (NUN/PHS/REC/IRB-UH/ 018/09/015). Permission was obtained from the concerned authorities before the participants were approached for possible involvement in the study.

Apparently healthy males who worked at different Faculties (Arts, Science, Engineering, and Health Sciences) of the Nile University of Nigeria, Abuja, were involved in the study. Within a period of one week, 51 males who were present in their various faculties were randomly approached for possible involvement in the study. Of the 51 males, 38 agreed to participate in the study. Of these, 2 males were on medication as directed by their physician, but did not disclose the illness for which medication was taken. So these 2 males were excluded from the study. Thirty six healthy right handed males (mean age ± standard deviation, 22.61 ± 11.34 years) participated in this study. All participants were right-handed, according to self-report and confirmed by Edinburgh Handedness Inventory [16]. They had comparable education level (15 years-17 years).

2. Absence of any health problem based on recent medical examination. The absence or presence of chronic illnesses and other habits was determined through their past medical history.

3. Total abstinence from drugs. Participants were non-smokers, and were not on medications.

1. Unwillingness to participate in the study.

2. Presence of health problems such as psychiatric, respiratory, metabolic, cardiac or central and autonomic nervous system disease, which may affect EEG tracing. The Mini-Mental State Examination (MMSE) was initially used to screen participants of cognitive deficit. No participant had cognitive deficit on this test.

3. Individuals using medications or drugs were not considered for participation. Those who fail the drug abuse test were not involved in the study.

Wet cupping therapy was conducted according to the British Cupping Society and Natural Health Institutes [3,17]. For the cupping therapy, sterile disposable cups 5 cm in diameter were used. Five points of the posterior neck, bilateral perispinal areas of the neck, and thoracic spine were selected for treatment (Figure 1). These points are classic wet cupping points chosen for all cupping therapies. Application areas were cleaned with antiseptic solutions. Cups (Sharon Xie Jiangmen Xinli Medical Apparatus And Instruments Co., Ltd., China) were placed on these points, and negative pressure was applied by a cupping pump (Sharon Xie Jiangmen Xinli Medical Apparatus and Instruments Co., Ltd., China) on the middle level to withdraw blood and intercellular fluid enough. The cups were removed after 2 minutes to 3 minutes. Then, the skin within the cupping sites was punctured to a 2 mm depth by using a 26-gauge disposable lancet. Then, vacuum pumping was applied three times and 3 ml to 5 ml of blood was drained per cupping site. Application sites were covered with sterile pads. 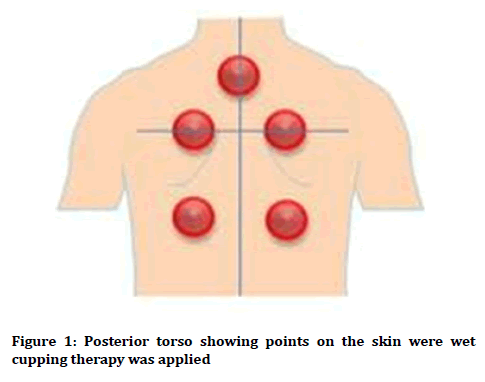 The electroencephalographic signal processing analyses were performed in MATLAB. The changes in frequency and amplitude of the EEG were calculated by means of power spectral analysis, measured as total power in microvolts-squared divided by frequency (μV2/Hz) [17]. We used Discrete Fourier Transform (DFT) to calculate the power spectrum of time domain discrete EEG signal. Power spectral density (PSD) is frequency response of a periodic or random signal. PSD shows distribution of signal strength depending on the frequency. The EEG data were recorded is a time domain discrete signal.

Power spectral density can be expressed with Equation 1;

Where N is the number of samples and xi () is the Discrete Fourier Transform (DFT) of the time domain discrete i () signal. i ()is calculated as shown in equation 2;

In the present study, EEG data of the F4-F8 (the right brain hemisphere) revealed that the powers of beta, gamma1, gamma2 and gamma3 waves (μv2) were increased after wet cupping therapy compared to the EEG tracing of corresponding waves before therapy (beta: t=2.21, p=0.04; gamma1: t=2.37, p=0.04; gamma2: t=2.48, p=0.03; gamma3: t=2.51, p=0.02). Comparison between the powers (μv2) of other waves (theta, delta and alpha) before and after therapy did not show any significant value. Similarly, percentages of all waves before therapy were not significantly different from their corresponding wave values after therapy (Table 1, Figures 2, 3 and 4).

Table 1: Powers and percentages of EEG bands before and after wet cupping therapy in the right brain (F4-F8) hemisphere

Table 2: Powers and percentages of EEG frequency bands before and after foot reflexotherapy in the left brain (F3-F7) hemisphere Though EEG is a non-routine investigation, it remains one of the most widely used objective methods of investigating brain activities in both normal and pathology [18-26].

This is the first study to report differences in frontal brain oscillatory beta and gamma waves of the EEG in healthy humans before and after wet cupping therapy. The powers of beta, gamma1, gamma2 and gamma3 waves of the EEG tracing increased in both the right and left hemispheres after cupping therapy compared with corresponding data recorded before cupping therapy. Also, the percentages of all gamma waves in EEG were increased after wet cupping therapy especially in right brain. These results indicate that this complementary therapy might have helpful effects on central nervous system functions in humans.

Similar to our previous results on the effects of reflexotherapy [14] and footbath therapy [15] on cortical functions, this present study also showed that application of wet cupping therapy resulted to frontal cortex activation as evidenced by increase mainly in beta and gamma waves. This suggests that the effect of wet cupping on cortical functions may be due to the skin puncture and vacuum pumping effects. The procedure stimulates cutaneous sensory receptors that consequently generate signals, which are sent to the central nervous system to activate the respective frontal areas [19]. Though wet cupping is widely known to enhance removal of toxins from the body, its effects on the brain is largely due to the local stimulation of cutaneous receptors produced by skin puncture and vacuum pumping. Beta wave is associated with normal waking consciousness, and is normally observed in the fronto-central regions of EEG recording [20]. Beta wave represents sensory motor rhythm and is related to cognitive processing and motor control [21]. Gamma waves are important for perceptual and cognitive processes [22]. Therefore an increase in beta and gamma waves indicates enhanced higher mental functions [23- 25,27]. Though the underlying mechanisms of generation of these waves are not exactly clear, animal models suggest a possible role of GABA-A system in the hippocampus, dentate gyrus, and CA1-CA3 system [23]. Indeed, these brain regions are involved in long-term memory formation and cognitive performance [9,14].

Our study suggests that beta and gamma waves can be used as functional markers of cortical activation in wet cupping therapy. This complementary therapy may serve as a means of increasing cognitive functions in humans with cognitive deficit. Indeed wet cupping therapy is currently used as an adjuvant in some neurological diseases such as chronic non-specific neck pain [28], lumbar disc herniation, cervical spondylosis [29], brachialgiaparaestheticanocturna [30], fibrositis [31], fibromyalgia [32], chronic knee osteoarthritis [33] and other pain conditions [34,35]. Interestingly, a recent study reported that stimulation of the left cerebral hemisphere with wet cupping therapy decreased the autistic symptoms in children with autism [36,37].

Cupping therapy relieves the symptoms in a variety of diseases or clinical conditions through its effects on the regional acupoint areas. For example, Tham et al. showed that cupping maybe capable of stimulating individual acupuncture points [38]. Among the stimuli, the negative pressure applied during cupping is one of the main factors that induce therapeutic effects. Though the underlying mechanism of therapeutic effects of the negative pressure from cupping is not completely understood, it may be associated with the release of neurohumoral factors resulting from or due to stimulation of the peripheral and central nervous system. For instance, stimulation of superficial and deep tactile and pain receptors can result to the secretion of bendorphin and adrenocortical hormone into the circulation, and are transported to their receptive sites, where they exert a variety of influences [1,38].

It is important to mention that factors influencing EEG waves, including disease conditions, physiological states, age, gender, as well as artifacts [39-42] were greatly minimized in our study. Importantly, the influence of gender on EEG tracing is increasingly been reported in the literature [43-45]. Consequently we considered only males in the study, due to the gender differences in EEG tracing, and also, the effects of certain physiological state (e.g. menstrual cycle) and hormones on EEG waves [46-48].

Since the present study consisted of only males, whether these results apply to females or children are not known. Therefore, it is imperative for future studies to investigate the cortical electrophysiology of wet cupping therapy on females and children as well as different categories of patients with neurodevelopmental, neurodegenerative and psychiatric disorders.