Background and Objective: In hernioplasty by midline pre-peritoneal approach the transversalis fascia is replaced by the giant prosthetic mesh which spread beyond the myopectineal oriffice(MPO).The prosthesis envelope the visceral sac are held in place by the intra-abdominal pressure and followed by connective tissue in growth. This technique is different from the conventional meshplasty by focusing on retaining the peritoneum rather than repairing the abdominal wall defect. This is a suture-less and tension free repair. In this procedure the pre-peritoneal space is entered directly by lower midline approach without disturbing the inguinal canal, spermatic cord and the sensory nerves of the groin. It is also suited for recurrent groin hernia because the repair can be done without entering the pre-operated area so the dissection can be done without any difficulty. Methodology: Patients presented with iguinal hernia, admitted under general surgery department at LG General Hospital, Maninagar, Ahmedabad between June 2017 to September 2019 were enrolled with this study with their consents and a prospective study of 30 patients was carried out. Interpretation and conclusion: The stoppa procedure utilize the many advantage of pre-peritoneal meshplasty in inguinal hernia repair. A key feature is application of Pascal’s law in mesh placement that reinforce the lower abdominal wall with the anatomical approach without disturbing the inguinal canal. However, it requires the good dissection in the pre-peritoneal space and adequate parietalisation of the cord structures. Stoppa’s repair is an especially important hernia repair as it required less tissue dissection & in term less surgical complication and shorter duration of surgery.

Several studies advocated the use of preperitoneal mesh placement or posterior approach. They argue that this is more effective than the traditional anterior approach because it repairs the hernia between the hernia content and defect [1]. Pascal's hydrostatic principle explains that the intra-abdominal pressure fixes the prosthesis in position, secondarily invested by the scar connective tissue [2]. The larger the prosthesis, the more efficient is the repair. Neither fixation of the prosthesis nor direct repair of necessary because of the efficiency of giant prosthesis.

To study the method of inguinal hernia meshplasty by midline preperitoneal approach.

To evaluate the inguinal hernia meshplasty by midline preperitoneal approach with respect to Operative time, Post-operative course and complication.

Patients presented with iguinal hernia, admitted under general surgery department at LG General Hospital, Maninagar, Ahmedabad between June 2017 to September 2019 were enrolled with this study with their consents.

The patient lies in a slight Trendelenburg position. The surgeon and nurse stand on one side and the assistant on the other.

After antiseptic preparation of the skin, an adhesive plastic shield is used to protect the incision from skin contamination. The abdominal wall is incised in the midline. The umbilicoprevesical fascia is cut along its entire length with Mayo scissors. The preperitoneal and prevesical cleavage is begun. Dissection progresses laterally under the rectus abdominis muscle on the side opposite the surgeon and posteriorly to the inferior epigastric vessels. The pedicle of the hernia is isolated on the side opposite the surgeon, either distinct from the spermatic cord (in direct inguinal or femoral hernias) or connected.

In instances of primary treatment of moderatesized hernias, continuous moderate traction followed by resection or turning inside out can be sufficient. Conversely, a strong adherent sac of a multirecurrent hernia with a large neck sometimes needs to be freed by scalpel or scissors, with a finger introduced through an opening in the peritoneal infundibulum to assist the dissection [3].

After the sac has been treated, the preperitoneal cleavage is continued easily and quickly below the external iliac vessels and laterally along the psoas muscle. It is of no use to continue this work upward beyond the line of Douglas, where the peritoneum is adherent and prone to tearing. The cleavage of the spaces of Retzius and Bogros is done quickly and easily, with a single, flat retractor placed under the abdominal wall and the surgeon's left hand, displacing peritoneum. The parietalization of the component the spermatic cord greatly simplifies placement of the giant prosthesis so opening the mesh to allow passage of spermatic cord is not required. Now the surgeon changes side to achieve the retroperitonal cleavage on the opposite side whichs proceeds as described previously [3].

Placement of the giant prosthesis

The prosthesis should be measured directly on the patient to allow the implantation of the largest piece possible. The mean dimensions are 26 cm transversely and 15 cm vertically. The prosthesis is then cut into a chevron shape according to the patient's measurements. A notouch technique is mandatory [4]. The giant prosthesis is then simply spread out in place by grasping its corners and the middle of each side with eight long Kelly forceps [5].

The prosthesis is first positioned on the side opposite the surgeon. While the assistant lifts and retracts the abdominal wall, the surgeon displaces the perito-neum with' his or her left hand toward himself or herself and upward, thereby opening the cleavage plane. Placement is achieved by pushing the prosthesis into position with the Kelly-forceps. The forceps on the middle lower margin of the mesh are placed first between the pubis and the urinary bladder, followed successively by the forceps on the inferior lateral corner, the middle point of the lateral mar-gin, and finally the upper lateral corner [6,7]. The forceps are pushed as far as possible under the abdominal wall, thereby unfolding the mesh and placingit at the inferior, lateral ad posterior limits of the retroperitoneal dissection [8].

In this way, the prosthesis envelops the peritoneum on the side opposite the surgeon. The surgeon again changes the sides and repeats the same procedure on the other side. This method of implantation leads to full unfolding of the Dacron mesh, which now widely envelops the peritoneum and extends well beyond the limits of both the myopectineal holes and protects the midline subumbilical incisional wound [9]. One single stitch of slowly absorbing material fixes the middle of the upper edge of the mesh to the lower margin of the Richert’s umbilical fascia (Figure 1). When necessary, suction drains installed anterior to the prosthesis in the space of Retzius.

All the patients were discharged after 3-5 days of surgery.

All patients given oral Amoxicillin plus clavulinic acid for 7 days and oral diclofenac sodium 50 mg BD for 2 days and then as per required.

All the patients were followed up on 3rd, 7th, 30th post-operative day and at 3 months and 6 months.

In this present study, 30 patients diagnosed as uncomplicated inguinal hernia (direct,indirect or bilateral) were taken for study during Jun, 2017 to October 2019. Operative and post-operative details were collected from case papers and confirmed by asking questions and systemic examination done during follow up. The median follows up duration was 6 months.

years and minimum age were 24 years.

All the patients are male. 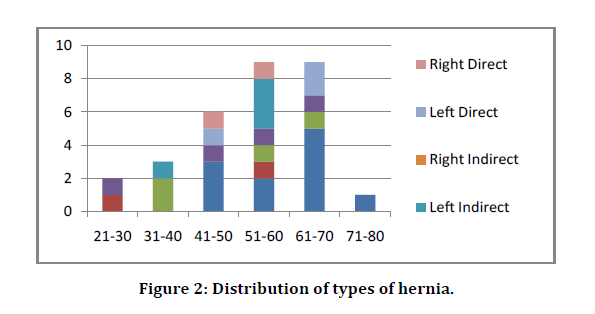 Figure 2: Distribution of types of hernia.

Shortest duration of surgery was 50 minutes which was for right side direct inguinal hernia.

Longest duration of surgery was 100 minutes which was for bilateral indirect inguinal hernia.

Average duration of surgery was 85.4 minutes.

Maximum surgeries (40%) were completed between 70-90 minutes.

Most of operated patients were given injectable antibiotic (Inj. Amoxycillin+Clavulinic Acid 1.2 gm IV 8 hourly) for 2 days.

Only 1 patient was given injectable antibiotic for 3 days as patient had developed superficial surgical site infection.

Maximum patients (63.4%) were given oral antibiotic for less than 5 days.

10 patients (33.3%) were given oral antibiotic for 5-7 days due to associated comorbid conditions like diabetes.

1 patient was given oral antibiotic for 8 days (>7 days) due to superficial surgical site infection.

Duration of analgesic are mentioned in Table 1.

Most of the patients were discharged between 3 to 5 days (Figure 3). 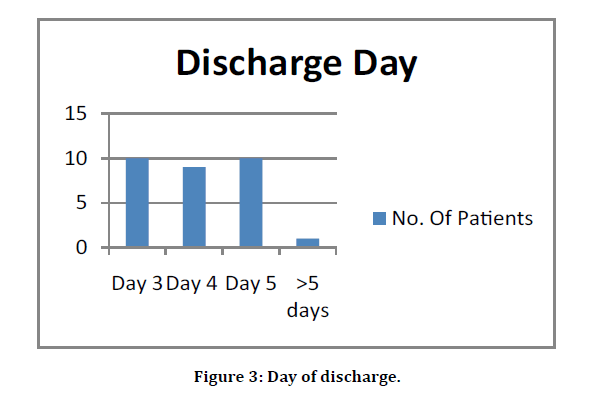 Return to normal activity details are mentioned in Table 3 and Figure 4. 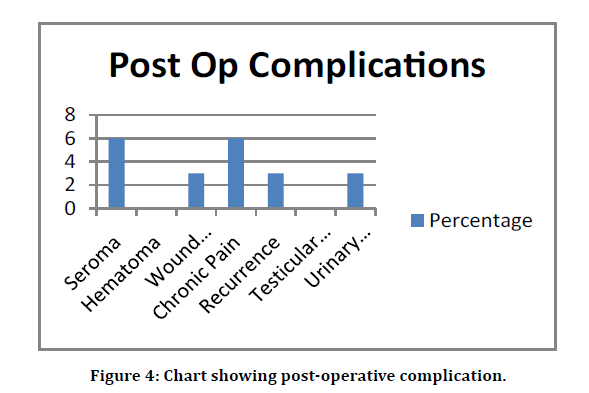 This is the observational study consisting of 30 patients of uncomplicated inguinal hernia who underwent Stoppas repair in th Department of General Surgery, LG Hospital – AMC MET Medical College, Ahmedabad in the period if 2017 – 2019 which included average 6 months follow up.

This study is compared with similar type of studies held previously like:

A study of giant prosthesis reinforcement of visceral sac: The Stoppa groin hernia repair in 234 patients done by Hemmant et al. during the period of 20th March 1995 and 20th March 2003 [10].

The stoppa procedure utilize the many advantage of pre-peritoneal meshplasty in inguinal hernia repair. A key feature is application of Pascal’s law in mesh placement that reinforce the lower abdominal wall with the anatomical approach without disturbing the inguinal canal. However, it requires the good dissection in the preperitoneal space and adequate parietalisation of the cord structures.

â?? It is a preferred procedure in many clinical scenarios because

â?? It allows the single incision for bilateral hernia and cover the entire myopectineal orifice so prevent direct indirect and femoral hernia.

â?? In case of recurrent hernia done by lichtenstein hernioplasty dissection can be done without entering the operated plane.

â?? As the sensory nerves of groin (ilioinguinal and iliohypogestric) are not disturbed less chances of chronic pain.

â?? Operative time is less for bilateral hernia in compare to anterior inguinal hernia repair simultaneously for both side and also in compare to laparoscopic repair.

Stoppa’s repair is an especially important hernia repair as it required less tissue dissection & in term less surgical complication and shorter duration of surgery. Mesh fixation (if required) is also adequate as the optimum point which may lead to less chances of recurrence.