One of the most striking epidemiologic observations has been the increasing incidence of adenocarcinomas involving the proximal stomach and distal esophagus. This trend is worrisome, because proximal gastric cancers are thought to have a poorer prognosis, stage, compared with distal cancers. Risk factors are Elevated body mass index, caloric intake, Gastroesophageal reflux disease and smoking. Stomach cancer occurs at a higher incidence in men than in women (ratio of approximately 2:1). The incidence increases with age, peaking in the seventh decade. Comparison of clinicopathological profiles of patients with proximal and distal gastric adenocarcinomas.

Adenocarcinoma of the stomach has been a leading cause of cancer death worldwide through most of the twentieth century. The incidence of this disease has gradually decreased in many parts of the world, due to changes in diet and other environmental factors. With the exception of just a few countries, the prognosis for this disease in the world remains poor. The explanations for these poor results are multifactorial. The lack of well-defined risk factors and specific symptomatology, and the relatively low incidence have contributed to the late stage of onset seen in our country specifically. In Japan, where gastric cancer is endemic, patients are diagnosed at a very early stage, which is reflected in the excellent 50% 5 year survival rate.

Although the incidence of gastric cancer has decreased dramatically over last century, the decline has been limited to cancers below the gastric cardia. The number of newly diagnosed cases of proximal gastric and gastro-esophageal junction adenocarcinomas has increased markedly since the mid-1980s.The disturbing fact is that these are thought to be biologically more aggressive and more complex to treat than distal tumors [1-35].

This is a prospective study of patients with Gastric Adenocarcinomas who were admitted in the Department of General Surgery, Sree Balaji Medical College & hospital, Chennai, during the period between July 2016 and July 2018. The patients’ history of presenting illness and past history of ulcer treatment as well as gastric surgery was noted. Their personal history was noted, which included their socioeconomic status, habit of smoking, alcohol consumption, diet. The weight and height of all patients were noted to calculate the body mass index (weight in kg / height squared in meters). Their blood groups were noted.

All patients included in this study underwent upper gastrointestinal scopy and an imaging study in the form of a contrast enhanced CT scan of the abdomen. During the endoscopy a minimum of seven biopsies were taken from the lesion and if an ulcer was found, biopsies around the ulcer crater were taken. Histopathological examination was then performed on the biopsies. Carcinomas of the gastric cardia were defined as: lesions with the center located within 1 cm proximal and 2 cm distal to the esophagogastricjunction. According to Siewert: type II was “real” gastric cardia carcinoma and type III was carcinoma located more than 2 cm below the esophagogastric junction (up to a maximum of 5 cm).

Proximal gastric adenocarcinomas included type II tumors, type III tumors, and other tumors up to the distal limit of the proximal third of stomach. The tumors located distal to the limit of the proximal third and up to the pylorus were included as distal gastric adenocarcinomas. All tumors were classified based on intra-operative information or pathology report into different types. The TNM categories were defined based on the 1977 classification, and the residual tumor status -R category, was determined intraoperatively and histopathologically. The standard treatment for proximal gastric carcinoma was total gastrectomy with D2 Lymphadenectomy, omentectmoy, with splenectomy. The standard treatment for distal gastric adenoacarcinoma was subtotal gastrectomy with D2 lymphadenectomy and omentectomy.

Demographic and clinical variables that are qualitative are given in frequencies with their percentage. Clinical variables which are quantitative are given in mean and standard deviation. Qualitative variables are analyzed using the Pearson chi-square test and Yates corrected Chi square test. Quantitative variables are analyzed using student independent t-test. P value less than 0. 05 are taken as significant. 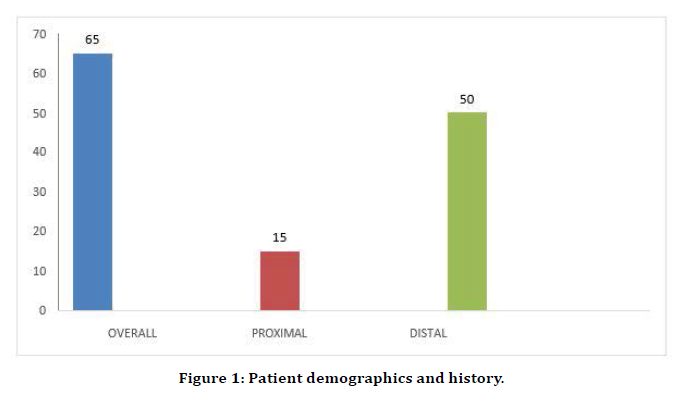 Body mass index was 20.57 overall, whereas it was 20.70 and 20.53 for proximal and distal adenomacarcinoma respectively. The P value was 0.93, which was insignificant. Our findings differed from the findings of other studies where proximal tumors were associate with a higher BMI. This is probably because of the small number of patients in our study (Table 1).

In our study we did not find any predilection for a particular blood group. P value was 0.21 which was not significant. But it has been proven, persons with blood group A are more at risk gastric adenocarcinomas (Table 2).

In our study 49 patients (75.38%) were from the lower socioeconomic strata. The P value was 0.02, which was significant. This is due to the difficult access to healthcare, more H. Pylori infections, lack of knowledge about symptoms, and because our hospital generally attracts and provides healthcare facilities to the poor (Table 3).

In our study, a higher number of patients (42; 64.61%) consumed a non-vegetarian diet. Vegetarian diet was taken by a smaller percentage (23, 35.38%) of patients, but the difference was not significant, as reflected in the P value of 0.77.

In our study, there were 22 (33.84%) patients who had taken treatment for ulcer before being diagnosed with gastric adenocarcinomas. Out of these, 6 (27.27%) patients had proximal lesions and 16(72.72%) patients had distal lesions. The P value was 0.79 which was not significant (Table 4).

In our study, 6 (9.2%) patients out of 65 had undergone a gastric surgery previously. The surgery was truncal vagotomy with gastrojejunostomy in all the 6 cases. All 6 patients had distal adenocarcinomas. None of the patients in our study had a family history of gastric cancer. Table 8: Morphology of the tumor on upper GI scopy.

There was no significant difference between the proximal and distal gastric adenocarcinomas when all the stages were considered together, the chi-square being 3.99 and p value being 0.26. But when stage III and IV was considered alone, it was found that more number of proximal tumors had presented at a later stage than the distal tumors (Table 11).