Inflammation is the immune response to dangerous stimuli, like pathogens, damaged cells, toxic substances or irradiation [1]. They act by removing injurious stimuli and initiating the process of healing [2]. Inflammatory response is the coordinated activation of signalling pathways which regulate the inflammatory mediator levels in tissues and inflammatory cells recruited from the bloodstream [3]. Anti-Inflammatory property refers to the ability of a substance to reduce inflammation or any of its 5 cardinal signs [4].

Through years of ingenious synthesis, many non-steroidal anti-inflammatory agents (NSAIDS) have been prepared and marketed .However, these drugs are known to provoke adverse effects such as gastrointestinal irritations, headaches, drowsiness and nausea [5]. Their prolonged use often leads to gastric intolerance, bone marrow depression, water and salt retention [6]. Hence, the search for alternative anti-inflammatory drugs mainly from natural herbs is required as they don’t have side effects and are cost-effective as well as easily accessible [7].

Beta sitosterol (BS) which is found abundantly in sesame seeds, flax seeds, almonds and cashews [12] is suggested to modulate the immune function, inflammation, and pain levels by controlling the production of inflammatory cytokines [13]. Beta Sitosterol lowers cholesterol levels and is precursor to an anabolic steroid [14]. Many research papers have shown that Beta Sitosterol has antiinflammatory effects on microglia and found that BS exerts anti-inflammatory effects mainly by inhibiting the activation of P38, ERK, and NF-κB pathways [15].

Though, the anti-inflammatory potentials of Lupeol, Piperine and Beta Sitosterol have been established in the past, this is the first ever research that compares the antiinflammatory of Lupeol , Piperine and Beta Sitosterol to each other as well as to the standard drug Aspirin conducted in vivo. Our team has extensive knowledge and research experience that has translate into high quality publications [16-35].

The aim of the current study was to evaluate and compare anti-inflammatory potential of Lupeol, Piperine and Beta sitosterol.

The anti-inflammatory activity of 3 different antidiabetic natural compounds was studied by using inhibition of albumin denaturation technique which was studied according to the methods of Mizushima, followed by minor modifications. The reaction mixture consisted of the test extracts and 1% aqueous solution of bovine serum albumin. The pH of the mixture was adjusted by using a small amount of 1N HCl for dissolving the mixture. The plant compounds (Piperine, Lupeol, beta sitosterol) with increase in concentration (100, 200,300,400, and 500μg/ml) were incubated at 37 ºC for 20 min and then later were heated to 51 º C for 20 min, once the samples cooled down, their turbidity was measured at 660nm. (UV Visible Spectrophotometer Model 371, Elico India Ltd) The experiment had been performed in triplicate. In this study, Aspirin was used as the standard anti-inflammatory drug.

The data were analysed statistically using one way analysis of variance (ONE-WAY ANOVA). Duncan Multiple range test was used to analyse the statistical significance between groups. P value of <0.05 was considered to be significant. 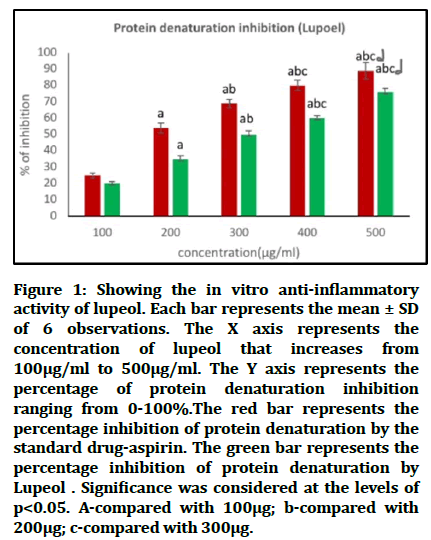 In vitro anti-inflammatory activity of piperine by protein denaturation inhibition. On comparing the antiinflammatory property of standard (Aspirin) and piperine, The Protein Denaturation Inhibition by piperine increases in a dose dependent manner ranging from 20% to 85% in a concentration range of 100μg/ml to 500ug/ml (Figure 2). 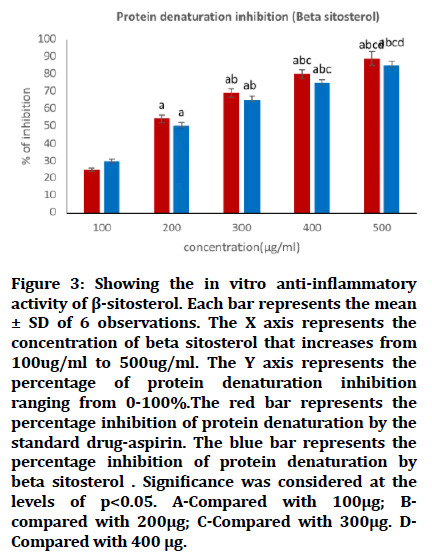 The purpose of our study was to determine and compare the Anti-inflammatory potential of three different antidiabetic plant derived compounds (Piperine, Lupeol, beta sitosterol). Since NSAIDS (Non-Steroidal Anti- Inflammatory Drugs) are synthetic, they tend to have side effects like heart burns, vomiting, drowsiness and gastrointestinal problems. Hence, there is a need for developing natural, plant based products in the market as they have least to no side effects and are cheaper in comparison to NSAIDS. In the present study, it has been observed that beta sitosterol has shown maximum protein denaturation inhibition which makes it the best anti-inflammatory compound followed by piperine and then lupeol. With further studies and trials Lupeol, Piperine and Beta Sitosterol can be recommended as potential anti-inflammatory drugs in the market.'

From the results of the present study, it is observed that Lupeol has a good anti-inflammatory potential. In a previous study it was observed that, Lupeol and lupeol linoleate have shown a significant reduction in paw swelling by 39% and 58%, respectively, in adjuvant arthritis induced in rats which proved anti-inflammatory properties of lupeol. Paw edema had been induced by carrageenan and dextran in male swiss mice, and the inflammation reduced 30minutes after the administration of Lupeol Acetate [36,37]. In the chronic model of granuloma pouch in rats, lupeol exhibited 33% reduction in granuloma weight. In the arthritis model, lupeol exhibited 29% inhibition after 21 days. This showed that lupeol isolated from Strobilanthes callosus exhibited significant anti-inflammatory and antiarthritic activities [36]

In the present study, it was observed that Piperine has a very good anti-inflammatory potential. Similarly in another previous study, Piperine inhibited the expression of IL6 and MMP13 and also reduced the PGE2 production in a dose dependant manner at concentrations from 10 to 100 μg/ml. This suggested that piperine has antiinflammatory, and antiarthritic effects in an arthritis induced animal model [38]. Also, piperine acts by mast cell-stabilizing activity, exhibits anti-inflammatory activity, thereby providing an effective treatment for Allergic Rhinitis [39].

In the present study, it is observed that Beta Sitosterol has an excellent anti-inflammatory potential. Similarly, it had been observed that Beta-sitosterol inhibited the expression of vascular adhesion molecule 1 and intracellular adhesion molecule 1 in TNF-alphastimulated Hirschsprung-associated enterocolitis as well as the binding of U937 cells to TNF-alpha-stimulated Hirschsprung-associated enterocolitis and reduces the phosphorylation of nuclear factor-kB p65. In the rat paw edema test previously, an inhibitory effect was found which goes from 50-70% which had been exhibited by beta-sitosterol [40]. In the same line with our findings, it was found that beta sitosterol decreased the activation of NFkB transcription factor in PMA-stimulated macrophage cells which suggest the anti-inflammatory action is mediated [41].

Since the extracts were natural, they could easily be destroyed and also lost in culture. But as they were all plant derived compounds. They are easily accessible and are cheaper than synthetic chemical compounds. With further in-vitro, in-vivo and clinical studies, these plant derived compounds could quench the thirst of herbal products in the market. The anti inflam properties of lupeol, piperine and beta sitosterol could be attributed to the factors that they are triterpenoids, alkaloids and phytosterols respectively that have proven to have antiinflammatory properties in previous findings.

Limitations-Since they are all natural products, they might not be found everywhere and may get damaged during culture as well. Future scope-All these three drugs may be recommended for the treatment of inflammationmediated development of diabetes and associated complications. However, among three drugs analysed beta sitosterol can be prioritized as it proved to possess better efficacy.

Our present study clearly indicates that all the three natural compounds have ability in inhibiting the protein denaturation among which the beta sitosterol exhibited the maximum protective effect followed by piperine and lupeol. This study concludes that all these three drugs may be recommended for the treatment of inflammationmediated development of diabetes and associated complications. However, among three drugs analyzed beta sitosterol can be prioritized as it proved to possess better efficacy.

The authors hereby declare that there is no conflict of interest in this study.

The authors express their gratitude to Saveetha Dental College & Hospitals for supporting and for successful completion of this project.

1. The present project is funded by