Isolation of a high bacterial load patient is essential to prevent the bacterial spread. To prevent further deterioration of the patient’s symptoms, the anti-tuberculosis regimen is essential. Recently the resistance of antituberculosis drugs has increased the importance of treatment regimen. [3] In Radiology, the first modality to visualize a tuberculosiscaseis by X-ray technique. Chest postero-anterior views are taken, followed by High resolution computed tomography (HRCT) in required cases [4-6]. Though X ray is a primary modality, HRCT chest is considered superior in imaging techniques. X ray Chest can be used to initially asses and thereby very useful in follow ups after treatment as the risk of radiation is minimal compared to that of a CT scan. However HRCT technique is compared to be superior in the imaging of lung disease. [7] HRCT chest is performed using thin section CT images with a high spatial frequency reconstruction algorithm to detect and characterize to image the pulmonary diseases. With the availability of multidectector CT scanners, the scans are performed in a single breath hold. Two methods are used to assess, one axial HRCT images and volumetric reconstruction. These techniques provides better evaluation of cases[8,9]. A comparative study of the sputum positive tuberculosis and non-tuberculosis patients was done using HRCT chest and X ray imaging.

This is a comparative study done on a minimum of 50 patients with sputum positive tuberculosis and other chest symptoms who presented to the Department of Radio Diagnosis at Sree Balaji Medical College & Hospital. The study period was from December 2017– June 2019.

Methods of collection of data

✓ Inclusion criteria: All patients with sputum positive tuberculosis and chest symptoms who presented to the radiology department.

✓ Methods: All patients were subjected to X ray Chest and HRCT Chest.

Patients of the inclusion criteria who came to radiology department and referrals from pulmonology department who were subjected to X ray Chest and HRCT chest done using Siemens healthiness 16 slice scanner.

Patient preparation: Patient was briefed about the procedure and made to change the dress but to avoid clothing with metal such as zipper, snaps or jewellery, since metal objects may affect the CT images.

The HRCT protocol: The patient had to lieon the test table in a supine position with his arms raised over his head. Further scans with a patient in the prone position are obtained in a few situations, mostly high-resolution CT protocols of the lungs. To minimize artifacts produced by respiratory flexibility, the shortest possible scan time was used. In order to prevent misregistration caused by irregular patient breathing between scans, chest scans are obtained wherever possible to ones’ breath hold.

Technical protocol is as follows

Data collection: The data was collected by data collection sheet which was designed to include all variables (demography, HRCT findings and X ray findings). X Ray Chest was taken by CR (Computed Radiography) machine. Chest PA (postero-anterior views) were taken.

Compare the non-tuberculosis patients with tuberculosis sputum positive cases with the help of HRCT chest and Chest X ray, proving that TB is better delineated with HRCT Chest, though the chest X-ray is an initial investigation. Though subtle findings between TB and non TB are identified, TB manifests in 3 major forms, primary TB, post primary TB and Latent TB, where the findings are unique in each manifestation.

Results are explained in detail in form of tables (Tables 1-8) and Figures (Figures 1-6).

Table 2: Frequency and percentage of people with TBandNon TB non-valid.

Table 3: Frequency and percentage of people with sputum AFP.

Table 4: Frequency and percentage of people with cavity.

Table 5: Frequency and percentage of people with ghon focus.

Table 6: Frequency and percentage of people with Nmorp.

Table 7: Frequency and percentage of people with mediastinal shift.

Table 8: Frequency and percentage of people with ATT. 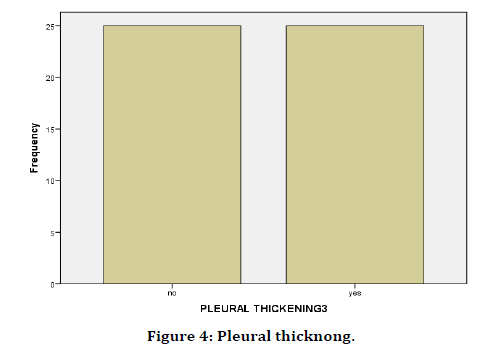 Figure 5. The same patient’s HRCT CHEST, axial and coronal shows bronchiectatic changes in the right upper lobe with pleural thickening; the trachea and the main stem bronchi appeared to be dilated (incidental finding), pleural thickening, and consolidation(not shown on this image). 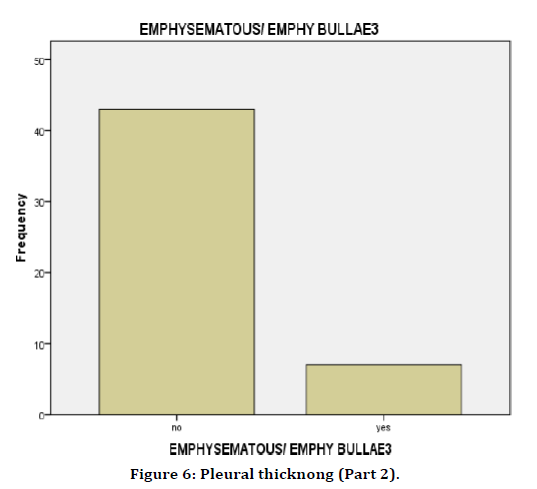 There have been human remains with TB traces dating back thousands of years. In recent decades, a concerted international effort to eradicate mycobacterium tuberculosis has been made to reduce the survival potential of the human pathogen with no existing reservoir for the ecosystem. This has been particularly successful since 2000, when the World Health Organization (WHO 2017) estimates that global incidence of tuberculosis has dropped by 1.5% each year. In addition, death from tuberculosis has been dramatically and steadily reduced. The WHO has reported that the global TB mortality rate has fallen by 22% from 2000 to 2015[10].

NTM-LD and pulmonary tuberculosis (PTB) have major medical complications if not diagnosed and treated at the earliest. This research aimed at contrasting and classifying the characteristics of chest CT that help distinguish NTM lung disease from PTB in patients with acid fast bacillus smear-positive (AFB) sputum [11-13]. All sputum positives for tuberculosis cases were included in the study and they underwent routine Chest X ray followed by HRCT chest [14]. In relation to the age, males between the ages 60 – 70 had higher correlation to the disease and females between the ages 50 to 70 had higher correlation to the disease. According to the study done there is significant association between collapse 38%ofstudy,(P 0.041, p value=<0.05), cavity 30% (P 0.001, p value<0.05), morphology of the nodules(ground glass and partly solid, 30% and 10%) (P 0.023, p value < 0.05) and nodule distribution (random and tree in bud, 18% and 30%) (P 0.037, p value<0.05) in primary TB [15-17].

In post primary TB, the patients had the treatment for tuberculosis once prior to the second episode of TB. The distribution of the nodules were statistically significant (P 0.037, p value < 0.05), implying that the nodules of certain distribution, centrilobular tree in bud 30%, random pulmonary nodules 16%, have an association with TB. Similarly, the morphology being ground glass 30% showed correlation with TB (P 0.023, p value < 0.05) [18].

Latent TB has a significant association with the pattern of nodule distribution, random nodules- 16% being predominant (P 0.037, p value < 0.05). In accordance to the male vs female statistics, there are 29 males and 21 females in this study. A total of 61.9% were affected of tuberculosis and 38.1% had other lung pathologies [19]. There were 58.6% of total males who were affected by TB and 41.4% who had other lung pathologies. There was no statistical significance and correlation between the individual disease/ pathology and the sex of the patient. However, females had more predilection to tuberculosis than male patients (61.9% vs. 58.6%). The X-ray Chest imaging showed similar statistics [20]. On comparing HRCT and X-ray, though HRCT Chestis a higher imaging modality, X ray chest is the first modality to visualize the significant imaging features. However certain imaging findings are better visualised in HRCT chest -segmental collapse, nodules in different size, morphology and distribution, fibro nodules, cavities, ground glass pattern, etc. The non-tuberculosis patients had higher incidence of consolidations and fewer random pulmonary nodules compared to the patients with typical tuberculosis imaging findings.

The patients with positive AFB smears and other lung pathologies had overlap of the clinical characteristics though certain imaging features pertaining to each stage of presentation in tuberculosis aided in the imaging of PTB and differentiating it from other lung pathologies. The comparative study also helped in better visualization of the pathologies with HRCT Chest.