Comparison of Denture Base Adaptation and Some Mechanical Properties among Conventional, CAD-CAM, and 3-D Printed Denture Base Materials

Introduction: In this study, the mechanical properties of several materials and technologies used in the fabrication of denture bases are compared (denture base adaptation, surface roughness and surface hardness). The digital technologies of CAD-CAM and 3-D printing were highlighted in the study.

Materials and methods: Three PMMA sheets were used to make a total of 90 acrylic resin specimens; conventional heat-cured acrylic, CAD-CAM acrylic and 3-D printer acrylic and divided into three groups according to the test (each group consist of 30 specimens). Denture base adaptation test including maxillary record base fabrication by the reference base in which it designed by EXOCAD and saved as STL files, after fabrication of 30 record base the digital superimposing with the best fit by EXOCAD was done and measuring the gap in a 60 point in which it distributed over the whole anatomical landmark. The hardness and roughness tests specimens where fabricated by CNC machine with dimension (length=65, width=10 and thickness=2.5 mm) and tested by shore D durometer and profilometer respectively. ANOVA and Tukey's multiple comparisons test (p=0.05) were used to statistically examine the data.

Conclusion: By comparing CAD-CAM fabrication with heat-cure and 3-D printer denture base processing techniques, the most accurate and repeatable fabrication technology was proved to be CAD-CAM.

Polymethylmethacrylate resin (PMMA) was the most popular material used to manufacture complete and partial removable prostheses due to its excellent chemical and physical properties, processing simplicity, and affordability. However, the material has some limiting properties, most importantly a volumetric loss of about 7% and a linear shrinkage of 0.45%-0.9% are noted. The discharge of excess methyl methacrylate monomer causes it, which compromises material's dimensional stability, the adaptation of the denture base to the underlying mucosa is hampered by this deformation [1-2].

Utilizing Computer-Aided Design and Computer-Assisted Milling (CAD-CAM) technology to fabricate removable prostheses may eliminate such drawback. Denture bases machined using CAD-CAM technology are made by machining a cylinder of acrylic resin under high pressure and heat, which prevents shrinkage due to polymerization That encourages the creation of longer polymer chains, As a result, monomer conversion is improved, residual monomer levels are reduced, and porosity is reduced CAD-CAM technology is becoming more widely used in dentistry laboratories and clinics [3].

Three-dimensional printers (3-D printers) can manufacture parts with complex geometries and surface finishes. The printers precisely print cross-sections of a model on a photocurable resin surface using a laser beam and digital light; the cross-sections of the model are repeated on the resin surface layer-by-layer until a 3-D item is formed. The processing application cuts the CAD system's Standard Tessellation Language (STL) file into several cross-sectional layers, with the thickness of each layer determined at this point. 3-D printers work by exposing a tank of photoreactive liquid resins to Ultra Violet (UV) radiation and layering data collected and processed by a CAD system to create desired objects [4]. 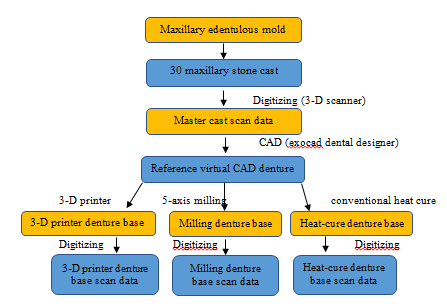 A three-dimensional image for each stone model was taken by (vinyl 3D scanner; smart optics), scanning was accomplished with (6 µm) accuracy according to ISO (12836) by fully automated Z-axis scan in which The scanner automatically guides the object to be scanned into the measuring field. The model was rotated in a measurement field (X=80x, Y=60x, Z=85 mm), the total scanning time of one model take (29 sec) only with resolution (1.3 MP), So that all surfaces and fine details of the model were shown clearly, scanner outputting STL file (Figure 2) [7]. 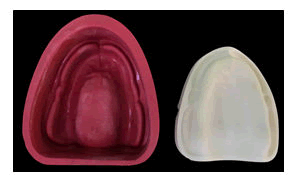 The next step was designing of the denture bases in (DESIGN) phase, which model analysis is the main step in this phase which was automatically detected by the system with simple modification may be needed for anatomical landmarks. The undercut was checked and the path of insertion was determined, the denture margin line was also determined as margins of crown determinant. Standard design of maxillary denture base from CAD was selected as reference for all three techniques, firstly CAD-CAM PMMA block chosen for this study was (98 × 22 mm 2S, shade pink and monolayer block) to fulfil the study requirement. The reference denture base design from CAD was opened by (iCAM V4.7) which is the manger program for the (CORiTEC 250i; imes-icore GmbH). The burs and tools were selected specifically for PMMA for better denture base quality after milling procedure (Figure 3) [8]. 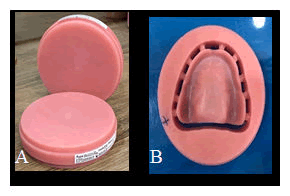 After that each technique will carried out by its machines. One of the CAD-CAM denture bases was utilized to construct a mold form silicon putty for the conventional heat cure, Zetalabor (Laboratory silicone putty), which serves as a reference for wax denture base duplication. Using the putty mold, based on the matching master casts, ten waxed bases with equal outline and depths were made. To make uniform wax dentures with identical thicknesses, melted baseplate wax was injected into the mold (Figure 4). 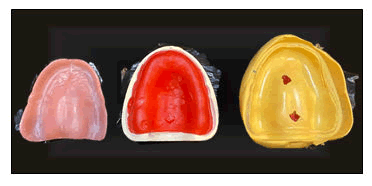 Figure 4: Showing silicon putty mold for wax denture bases, in which then used for fabrication of heat-cure acrylic denture base.

Finally, ten 3-D printer denture bases had been made up with a 3D-printable material (soft acrylic optiprint; dentona) using a DLP-based printer (versvs 385; MICROLAY). Each building layer was 100 mm thick, and the printer's light source (a light-emitting diode) had a wavelength of 385 nm following the manufacturer's recommendations, the denture bases were cleaned with ultrasonics in isopropyl alcohol for 10 minutes and then treated with an ultraviolet light post polymerization machine for 15 minutes (Figure 5) [9]. 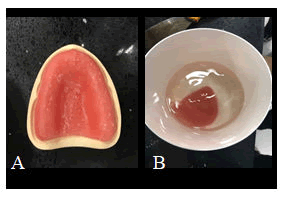 All denture bases were properly hydrated for 24 hours, at that point softly sprayed with anti-glare spray (3-D laser checking anti-glare shower; Erum-YOONWON) with a particle diameter of 2.8 µm on average, after processing the tissue surfaces of each denture were scanned using (vinyl 3D scanner; smart optics), resulting in STL files for the tissue surfaces of each denture (Figure 6). 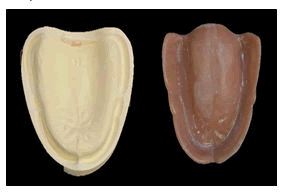 Figure 6: denture base with its corresponding cast after cleaning and finishing.

Using the (Exocad in-lab DentalCAD) software, the STL files of each denture were overlaid on the STL files of the matching preparation cast utilize this software, there were measurements taken at 60 points for each of the 30 dentures using an overlay guide in which it represents one of the best fit denture base with 60 points drawn on it in specific location to occupy the whole anatomical landmark including the crest of the ridge, denture border, median palatine suture, palate, and posterior palatal seal area (Figure 7), and used as guide for all denture bases for standardization the measurement [10]. Figure 7: A) Virtual record base after processing; B) Represent the virtual cast and its record base. C) Show the three layers after superimposition (cast, base and the reference for 60-point standardization).

One design used for all the three groups (milled, 3-D printed and heat-cure acrylic resin), in which it designed by geometric designing program (AutoCAD) according to the selected dimension and saved as STL file [11].

For the conventional heat cure, a plastic pattern was constructed using highly accurate laser cutting machine from the STL file that designed previously by AutoCAD. During the mold preparation, the traditional water bath processing approach for full dentures was used. While the CAD-CAM and 3-D printer specimens were followed the same protocol for the denture base fabrication except that the design was taken from (AutoCAD) as STL file [12].

Statistical analysis software is used to carry out the analyses (IBM SPSS Statistics 26). The ANOVA test was utilized to examine the obtained mean values. When (p value) was less than 0.05, statistical significance was reported for all comparisons [13].

The null hypothesis was rejected as a result of the findings of this study, that state that no differences among the three-processing technique (conventional, CAD-CAM and 3-D printer) in mechanical properties and confirmed that variation among the processing technique occurred. Of the three-technique evaluated, the CAD-CAM is the best method of acrylic resin production throws the mechanical properties followed by conventional acrylic resin while the 3-D printer is the least mechanical properties. Descriptive statistic including mean, standard deviation and slandered error are illustrated in Table 1 [14].

Table 1: Comparative analysed of the mean values among denture base adaptation, hardness and roughness.

Complete Dentures (CDs) should offer a close fit with the mucosa to improve masticatory cycle performance. The goal of using new and improved technology to make CDs was to enable the optimal mucosal adaptation. Another significant aspect of CD production is the technique's repeatability, which ensures that the same precise denture foundation is produced every time. One of the limitations of conventionally constructed complete dentures is the net volumetric shrinkage of PMMA, which results in poor denture base adaptability as a result of dimensional changes [18]. The CAD-CAM denture blocks are made by machining an acrylic resin cylinder that has been performed. This cylinder is made under high pressure and heat, preventing the definitive milled prosthesis from shrinking. When compared to a conventionally treated denture, the highly condensed resin causes a reduction in free monomer and porosity, resulting in a reduction in surface roughness. The findings show that the newest processing technique, CAD-CAM provides a desirable balance of minimal fabrication distortion and consistently better adaptation, with the smallest gap values followed by conventional and the largest gap in 3-D printer denture base, where a significant difference was found between all three groups. This coincide with the result of in which, when compared to pack and press, pour, and injection denture base processing processes, the CAD-CAM manufacturing process was shown to be the most accurate and reproducible denture production methodology. However, it contrasts with the finding of They found that CAD-CAM and injection moulded CRDPs have a much lower overall intaglio surface trueness than traditional CRDPs.

Furthermore, the best-fitting alignment modality allows for complete seating of the superimposed digital surfaces, with negative and positive values denoting surface deviations. The digital superimposing enables to measure the areas where the denture base implies a compression to tissue is shown by negative values. However, those areas would probably prevent the denture base from seating as accurately as this modality allowed, leading to a greater misfit. As a result, rather than the actual denture base adaption, the digital superimposition method should be viewed as an assessment of overall trueness. Also, previous studies performed by either physical or digital techniques generally evaluated the gap using linear measurement of the vertical distance between the cast and base. However, because the gap between denture base and dental cast was in 3-D space, linear measurements alone would be insufficient to assess it [19].

When compared to heat-cure and 3-D printer denture base processing processes, the CAD-CAM fabrication process was shown to be the most precise and reproducible denture production methodology. At the mid palatine suture, posterior palatal seal, and palate, CAD-CAM produced the most precise adaptation. The conventional approach was most accurate at the crest of the ridge and the denture border, according to the median results. CAD/CAM PMMA showed decreased surface roughness values than conventional PMMA and 3-D printed PMMA.