Materials and Methods: the sample examined were 150 nickel-titanium alloy orthodontic wires commercially available from three different manufacturers (IOS, A-star and DENXY super elastics nickel-titanium 0.012 inch wires ) were tested for load deflections rate, the records were taken with the aid of digital Universal testing machine(compression tension machine), simulating an extrusive force at the right canine (TYPODONT model) , in-activations of 0 to 3 mm, with readings of the force released by deflection in unloading of 0.5mm, starting from 2.5mm, 2mm,1.5mm,1mm, 0.5mm consequently.

Results: statistically significant differences were found among the three wire manufactures concerning the load deflections behaviors illustrate that the least mean of wire deflections recorded for the (A star) wire type then followed by (IOS) wire type and the greatest mean was for the (DENXY) wire (A-star<IOS<DENXY) at unloaded distances in a consequence of 0.5mm.

The golden concept and interesting benefits that nickel-titanium alloys have been widely used in comprehensive orthodontic treatment over the past ten years because of their superelasticity and shape memory effects which are favorable mechanical properties [1,2-5]. Nickeltitanium arch wires can be transformed to the austenitic phase from the martensitic crystalline phase by heating, on cooling the reverse process occurs [6-9]. The modulus of elasticity of each orthodontic metal alloy does not change, stainless steel alloys have a high modulus of elasticity which considered to be more rigid in comparison to nickel-titanium alloy, otherwise multiple bends can be applied on stainless steel weirs during different phases of orthodontic treatment to avoid excessive force levels by passing rigidity of the alloy [10]. So, the greater is the modulus of elasticity of a wire, the higher will be the load-deflection ratio and its rigidity [11]. The super elastic exhibit hysteresis (i.e., the activation and deactivation plateaus have different stress magnitudes). as a result, the wire does not deliver the same force as that applied to activate it, The mechanical hysteresis is related to the difference between the loading and unloading stress plateaus where energy is dissipated or absorbed [12]. However, precise bending of these arch wires is difficult and can lead to changes within the crystal structure of the alloy, thus changing the mechanical properties unpredictably [13]. The wire force depends on wire deformation (such as on tooth deviation and (angulation of the tooth) and the wire crosssection and material [14].

The sample examined was 150 nickel-titanium alloy orthodontic wires commercially available from three different manufactures IOS, A-star and DENXY super elastic nickel-titanium 0.012-inch wires. the wires tested are mainly available as preformed arches, these were tested for load deflection rate in dry conditions [15], the records were taken with the aid of digital Universal testing machine (Figure 1) (compression tension machine) at department of mechanical engineering)/college of engineering /University of Mosul. For the testing methods, a TYPODONT model (Dentarum, Germany) firmly fixed to the underlying bench with metal screw, full arch attachment bracket set (22 Roth brackets, Dentarum, Germany) attached to teeth of TYPODONT model, except for the maxillary right canine attachment bracket that was fixed to the rod of test machine after removal of canine from the model simulating an extrusive force at the right canine starting from maximum of 3mm loaded position, when the records of loaddeflection were taken at each 0.5mm unloading test, starting from 2.5m, 2mm, 1.5mm, 1mm, 0.5mm consequently (Table 1). 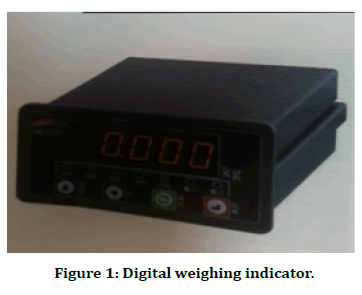 The Universal testing machine (compression tension machine) the machine was designed by the department of mechanical engineering / college of engineering /University of Mosul. It consists of electronic compact scale SF-400A for measuring force in gram figure 1. The sensor of the scale was placed out horizontal and vertical rods were attached, metallic base support for vertical measurement stabilized and fixed on the compact scale used for supporting the standard model of teeth that to be tested. Dial gauge for measuring the distance of wire deflection. Dentaurum maxillary orthodontic study model was prepared by removing the right maxillary canine to allow deflection of the wire vertically.

After completing the fixation of brackets and tubes then the model was fixed to the base support at its constant position, inserting a wire in the molar tubes and engage it to the slots of brackets on stabilizing model and to the bracket of missing canine that bonded on the deflecting rod tying the wire to all bracket with ligatures. After completing ligation, the engaged wire was deflected to 3mm vertically at right canine site, the unloading force was recorded at every 0.5mm interval.

The three groups of super elastics nickel titanium orthodontic wires from three different manufactures IOS, A-star and DENXY super elastics nickel titanium 0.012 inch wires were tested for load deflections rate from maximum of 3mm loaded position when the records of load deflection were taken at each 0.5mm unloading test, starting from 2.5mm, 2mm,1.5mm,1mm,0.5mm consequently, the records of the three groups were tabulated and statistically analyzed with the aid of software package SPSS 18,then the mean and standard deviation were calculated, and the analysis of variance (ANOVA at p<0.001) was accomplished to investigate the level of significance among the three wire manufactures concerning the load deflections behaviors weighing the mean for groups using Duncan multiple range test post hock as shown in table 2.

Table 2: Descriptive statistics and ANOVA at p<0.001 for the three groups of wires at five distances of unloaded position test.

The descriptive analysis for each group of the three manufacturers illustrate that the least mean of wire deflections recorded for the A-star wire type then followed by the IOS wire type and the greats mean was for the DENXY wire (A-star<IOS<DENXY) at unloaded distances in a consequence of 0.5mm as shown in table 2.

The results of the current study were explaining the differences of super elastic wires from different manufacturers in deflection rate recorded on the deactivation force [16]. The super elastic wires have been widely used when large deflections and relatively constant force are required during active stages of tooth movements is needed, the unloading force is of main importance for orthodontic treatment at different phases [8]. These types of wires exhibit magnificent clinical advantages through the application of relatively low and stable force levels for the first phase of treatment with fixed orthodontic appliances [8]. During the initial phase of treatment which include alignment and leveling nickel-titanium is the best wire for releasing constant and light forces that improve the efficiency and efficacy at this stage of treatment [1,17]. Nickel-titanium wires have been developed with greater spring back and a larger recoverable energy than stainless steel or beta- titanium wires when activated by the same amount of bending or torqueing [18]. This agrees with the results of the current study.

The results of this study agree with the study of Segner et al. [19], and Nakano H et al. [16] who observed great variation in force values with different nickel-titanium wires of the same diameter indicating that the wires are intrinsically different and therefore can be differentiated according to their characteristics. Lombardo et al. [1] stated that mechanical properties of nickel-titanium alloy wires are greatly influenced by different technological parameters such as chemical composition, heat treatment and degree of working which are beyond the manufacturer classification. This agrees with the current study that shows a great variance between the deflection rate in response to unloading force effect, the A-star wire had the lowest deflection record, followed by IOS wire, whereas the DENXY wires had the greater deflection value. An important issue considering that minor differences in the production process of super elastic wires can lead to sizeable thermomechanical variations in the behavior of the arch wires [20].

Pratten et al. [21] and Fruge et al. [22] disagree with the results of the current study who stated that the types of ligatures and design of brackets had significantly influenced on the actual amount of deactivation force than wires manufacture that both affect the frictional force. Kazuo et al. [23] stated that the nonlinearity deflection of orthodontic wires was affected more by the cross-sectional shape than by mechanical properties, this also disagrees with this study.

In the present study the comparisons of mean load-deflection values of super elastics nickel titanium orthodontic wires from three different manufactures IOS, A star and DENXY revealed that the least mean of wire deflections recorded for the A-star wire which may exhibit superior elastic properties in comparison with the other manufacturers included in the current study, the IOS wire type load deflection results exhibit greater load deflection rate whereas the greatest mean was for the DENXY wire type.