Objective: Determine the precision of a questionnaire in determining halitosis by comparison with halimeter. Methods: The sample involved 400 secondary schools’ male students aged 15 years old, who were randomly selected. A welldesigned format (questionnaire) was designed and the adolescent students who meet the criteria were taken a questionnaire, Clinically the assessment of exhaled Volatile Sulfuric Compounds (VSCs), which are primarily generated in and produced from the oral cavity, contributing to halitosis were done by a portable, on-site, and easy to use device called halimeter which is a noninvasive method. Chi square was used to determine the association between self-reported halitosis and clinical halitosis. Spearman’s correlation was used to determine the correlation between the questionnaire and halimeter results. Results: There was highly significant difference between self-reported halitosis and halimeter results. Spearman’s correlation analysis was showing a weak positive highly significant correlation coefficient between self-estimated and clinical halitosis. Conclusion: Students with self-reported halitosis was found to correspond significantly with clinical halitosis. Existing findings suggest that self-reported questionnaire can be used to judge one’s own halitosis.

Halitosis is multifactorial etiologically but most of the causes are related to the oral cavity in up to 85% of cases, halitosis originates from oral cavity itself and/or an otorhinolaryngological source, thus it is termed oral pathological halitosis [3-6]. However, in the remaining 15% of cases the source is non-oral, and halitosis can indicate a distal systemic disease, so it is termed extra-oral pathological halitosis. Many Gram-negative anaerobic bacteria, mainly periodontal pathologen such as Treponemadenticola, Porphyromonasgingivalis and Tannerrellaforsythia, produce a diverse array of malodorous compounds including VSCs, short chain organicacids, diamines and phenyl compounds from their metabolism contributing to halitosis [7,8].

Volatile sulfur compounds (VSCs) are the most significant products as regards halitosis with hydrogen sulfide (H2S), methyl mercaptan (CH3SH) as the main contributors [9]. However, self-perception is known to be limited by impreciseness and low sensitivity. It is considered as the invalid method to judge one’sown halitosis because the grade of self-perceived halitosis very often does not correspond to its clinical diagnosis [10,11]. Many people complain that they infrequently or frequently have halitosis and that the condition affects their quality-oflife. However, some people do not have any clinical evidence of genuine halitosis, those people stubbornly complain of having halitosis although it is apparently not perceived by others andthis state is defined as pseudo-halitosis [1].

Clinically, organoleptic test and specific devices such as Gas Chromatography, Oral Chroma, Breathtronand Halimeter have been reliable to measure halitosis. However, these measurement methods are not very easily employed because they needproficient examiners, consume time and cost money [11].

As in anearlier study reported that selfreportedhalitosis has been reliable and correlated significantly with the objective assessment of halitosis [12]. Hence, the aims of the current study were to evaluate the students’ self-reported halitosis, in comparison with clinical diagnosis based on VSCs concentrations by using halimeter.

This study was (Observational) cross sectional study which carried out during the period between December 2019 and February, 2020. The survey was conducted among urban secondary schools in Karbala city in Iraq.

An approval was obtained from:

Ministry of Education to examine the students of sample without obligation, to ensure cooperation from school’s authority.

Ethical approval had been gained from Ethics Committee/ College of Dentistry/ University of Baghdad.

From psychological department in Faculty of Arts-Baghdad University.

Four hundred students who randomly selected from 44 school in the center of Karbala city were involved in the current study.Inclusion criteria: Systemically healthy male adolescent age 15 years’ old.Exclusion criteria: Students with any systemic diseases, who have malocclusion or wearing an orthodontic treatment and who use any chemical form of plaque controlwere excluded from the study.

For at least one hour before measurement of halitosis by haimeter subject involved in our study should avoid any oral activity, such as eating, drinking and any oral hygiene habits [17]. In the case of forgetfulness, the mouth should rinse meticulously. The student waited at least10 minutes before usinghalimeter. Volatile sulphides tested using a Halimeter device (Fitscan, Tanita Corporations, Arlington, USA). Measurements carried out according to manufacturer's instructions:

Firstly, the cap raised to turn on the sensor. The digits displayed on the countdown display 5 to 1 shaking the device 4 or 5 times to remove any odour or moisture present.

After starting the device, the child should breathe into the sensor until a beep sound (breathing for about 4 seconds) without covering or rear ventilation by hand. The opening should be approximately 1cm from the mouth; hence, the child should touch the chin with the thumb so that the sensor is directly in front of the mouth, if the child stops breathing before the beep sound does not sound or if the child does not breathe within 6 seconds, the camera turns off automatically.

The term level displayed on the screen flashes for a few seconds before the device does go out. The sensor is closing with the tip once the operation complete.

Data entered onto Microsoft Excel and the questionnaire data were translated into a computerized database structure. Statistical analyses were computer assisted using SPSS version 21 (Statistical Package for Social Sciences). The Chi-square test was used to assess the association between the questionnaire results and the halimeter readings. Spearman correlation: a nonparametric measure of rank correlation described as monotonic correlation was used. P-values less than 0.05 were considered as statistically significant and P values more than 0.05 were regarded as not significant, while P-values less than 0.01 were considered as a highly significant.

According to halimeter measurement there were highly significant difference between selfreported halitosis according to questionnaire and halimeter results, as shown in Table 1 below.

Table 2 ׃ Characteristics of students according to comparison between heliometers and questionnaire. 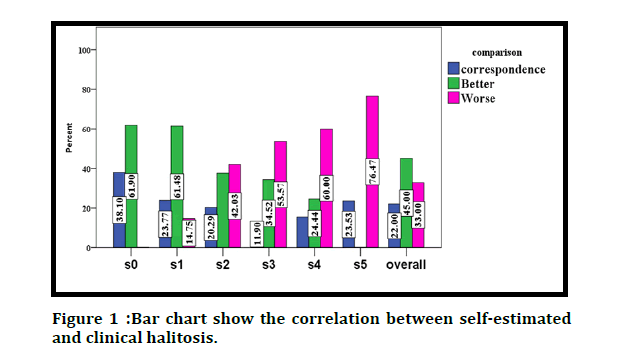 Both study methods (self-reported and halimeter) are important methods in understanding halitosis, but observation using VSC monitors is considered anauxiliary endpoint, while self-perceived halitosis is recognized as a true outcome. Epidemiological studies with true outcomes provide awareness fixed to the real impacts of halitosis [18]. In many studies, the assessment of halitosis based only on the subject’s self-perception. Many professionals do not consider this method to be reliable because it is subjective, and apparently, the method is not homogenous among participants [19].

The students in this study were randomly selected from public male secondary schools. Age was not a risk factor for the increase in level of VSCs [13]. and this is in accordance with many previous investigations [20-23]. The recent study showed that most students perceived halitosis by themselves and through others. In addition, a high prevalence of adolescent students who were concerned about halitosis and more than half of students reported that halitosis interfered with their family and social life this is in accordance with Pham et al. and that reflect the negative impact of halitosis in adolescents’ lives, this in agreement with [12,21,24]. Among the participants that had self-reported halitosis aremarkable observation was that some (a small proportion) were not treated their problem neither professionally nor by any home measures, the reason for this is not known but it can be speculated that dental fear might be the contributing factor as is a common phenomenon in the world [25]. Halitosis when perceived by the subjects and others could disturb their social lives and make them lack confidence in communicating with other people. Some students with objectionable halitosis (according to the questionnaire answers) may have a Halimeter reading below the manufacturer's threshold, whereas others without detectable halitosis (based on questionnaire answers) may have a Halimeter reading above the threshold. This may be explained in two ways. Firstly, the Halimeter is chiefly sensitive to the VSCs, hydrogen sulfide and methyl mercaptan. Other compounds like volatile fatty acids and the polyamines, putrescine and cadaverine, may be detected in hand on mouth technique in questionnaire, but not on using the Halimeter. Secondly, the Halimeter is more sensitive to hydrogen sulfide than methyl mercaptan.

The result of the study demonstrated highly significant correspondence between selfreported and clinical halitosis. Thus, selfreported questionnaire of halitosis can be used as a possible method to judge one’s own halitosis. On the other hand, the present results were not in accordance with the previous studies which indicated that self-reported halitosis was not associated with clinical halitosis [12]. The differing results can be explained that cognitive, emotional and physiological factors can affect the perception of smell and subsequently affect the outcome of the questionnaire [26].

We want to acknowledge and thank all the faculties of the Department of Public Health Dentistry, Saveetha Dental College for their support and assistance.

There was no conflict of interest.

Department of Pedodontics and Preventive Dentistry, College of Dentistry, University of Baghdad, Iraq