Compatibility of Novel Gingival Retraction Pastes Based on Boswellia papyrifera with Polyvinyl Siloxane Impression Material (A Comparative in-vitro Study)
All submissions of the EM system will be redirected to Online Manuscript Submission System. Authors are requested to submit articles directly to Online Manuscript Submission System of respective journal.

Hiba A Salman1*, Manhal A Majeed2 and Eaman A Al-Rubaee1

An astringent agent is a chemical that causes body tissues to shrink or constrict. After topical application, this effect is normally local. Astringents are commonly used in gingival retraction procedures to avoid bleeding or oozing [4].

However, these preferred chemo mechanical agents have their limitations, wherein Aluminium chloride has less vasoconstriction than epinephrine with the risk of sulcus contamination. It also modifies the surface detail reproduction and, most importantly, inhibits the set of polyvinylsiloxane and polyether impression [5].

Many astringent agents had pH values that were extremely low or acidic. The majority of the solutions were in the pH range of 1 to 3, which is higher than the etchants used in bonded composite resin restorations.

These solutions can harm oral tissues and have a greater impact; it would seem prudent to use caution when using low pH astringent agents and to avoid exposing sensitive intraoral tissues, particularly when tooth preparation is close to the dental pulp [6].

As a result, it is critical to reveal a new astringent agent for reducing the acidic activity in an aqueous base and fabricating a new gingival retraction paste with little or no Aluminum chloride that is easy to use, has good controllability, is affordable, and has higher biocompatibility and protection standards.

Plant products are thus appealing alternatives to synthetic products because of their biocompatibility, low toxicity, environmental friendliness, and low cost.

Herbs are widely being used as medicine, either as home remedies or as complementary and alternative medicines.

In this analysis, Boswellia papyrifera was used as a potent astringent agent to create a new gingival retraction paste. Many studies have shown that this material has many beneficial properties, so it was chosen. It can be applied topically to wounds as an astringent antiseptic, and it aids in the tightening and healing of inflamed mucous membranes. Furthermore, Boswellia papyrifera has low acidity (pH=6), is inexpensive, readily available, and simple to prepare as an aqueous extract [7-9].

The active constituents are Boswellic acids, which are found in the extracted Boswellia terpenoid component (astringent) [10].

Boswellia is a stem exudation; it is an oleo gum resin of the Boswellia genus, which has 17 genera and 600 species and belongs to the Burseraceae family. For centuries, gum has been widely used in medicine to treat various ailments, especially rheumatism and skin diseases [11,12].

In Africa, Boswellia papyrifera is one of those species that provide numerous economic and ecological benefits. Ethiopia, Nigeria, Cameroon, the Central African Republic, Chad, Sudan, Uganda, and Eritrea all have it [13]. The species is widely known for its Frankincense.

The crude of Boswellia papyrifera used in this study was collected from a local traditional market in Baghdad, Iraq, and came from Ethiopia.

The extract has been checked by the Department of Biology at the University of Baghdad, College of Science for Women.

Traditional methods were used to make the aqueous extract [14,15]. The synthesis of experimental gingival retraction pastes samples was done at the basic science, Department of the dentistry college - University of Baghdad.

Preparation of gingival retraction pastes in an experimental setting

Two new gingival retraction pastes based on Bp, with and without AlCl3 (5 % Bp +7.5 % AlCl3) and (5 % Bp), respectively, have been produced. Polyvinylpyrrolidone (PVP), Kaolin, and Deionized Water were also used in the production of both pastes.

In a cold-water bath, 20 ml of 15% AlCl3 aqueous solution was combined with 20 ml of 10% aqueous extract of Bp for 5 minutes in a thermostatic stirrer using a 1 cm para magnetic stirrer bar with a rotational speed of 100r/Second. 1gm PVP powder was then applied to the previous mixture and stirred for 30 minutes in a thermostatic stirrer over a hot water bath (70 oC) until all polymers was dissolved. For the next 30 minutes, 14 g kaolin was added incrementally and slowly with a stirrer until the paste was formed.

Under a hot water bath (70 oC) in a thermostatic stirrer with a rotational speed of 100r / second for 30 minutes, 40 ml of 5% aqueous extract of Bp was combined with 1gm powder of PVP until all polymer was dissolved. For the next 30 minutes, 14 g kaolin was added incrementally and slowly with a stirrer until the paste was formed.

The test of the Compatibility with Light body type III polyvinylsiloxane (PVS) impression material (Variotime light body type III, KULZER, Germany), was carried out by measuring the standard-setting time of polyvinylsiloxane impression material to obtain the ultimate compatibility time polymerization index (100%) for the control group and compared it with the compatibility time polymerization index of the impression after mixing with the studied gingival retraction pastes at oral temperature (35 ± 0.1) °C; using Brookfield HBDVII+ viscometer (USA), this study was performed at University of Technology/ Department of Material Engineering.

The thirty-two samples were divided into four groups of eight for each according to the type of gingival retraction material that would be mixed with PVS impression material.

The specimens were prepared by mixing (6.6) gm of PVS impression with 40 μl (0.07g for experimental and 0.08 for conventional) gingival retraction pasts in a cylindrical plastic specimen container with dimensions (6.5 cm in height and 3.5 cm in diameter).

While the specimens of control groups were performed without mixing with any gingival retraction pastes, thisstudy was conducted with a viscometer at 0.5 rpm and spindle size (0.7) at oral cavity temperature (35 ± 0.1)°C(Figure 1) [17]. The compatibility time polymerization index (CTPI) was expressed as 100% for the control group (without contact with any gingival retraction paste) [18].

Thus if the CTPI was 100% for other groups (contact with gingival retraction pastes) that meant CTPI of the impression was identical to its control and represented the optimum Compatibility; otherwise, if the index value below or higher than 100%, it would be less Compatibility.

Table 1: Descriptive statistics and KWH test of CTPI among the group0073.

Table 2: MWU test of CTPI for multiple comparisons between groups. 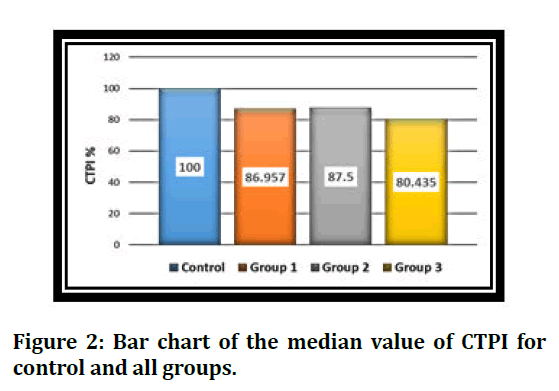 Figure 2: Bar chart of the median value of CTPI for control and all groups.

This test revealed that the highest CTPI was seen in experimental gingival retraction paste in group 2 (5% Bp). In contrast, the lowest CTPI was seen in conventional gingival retraction paste, group 3 (3M), with a significant difference between them; their median values were 87.5% and 80.543%, respectively. While there were no significant differences between experimental gingival retraction pastes, group 1 (5% Bp +7.5% AlCl3), and group 2 (5% Bp), the median values were 86.957% and 87.5%, respectively. The viscositypolymerization time curves of PVS impression material for all groups are illustrated in Figure 3 to represent the polymerization time for each group and the rheological behaviour of PVS impression for all groups. 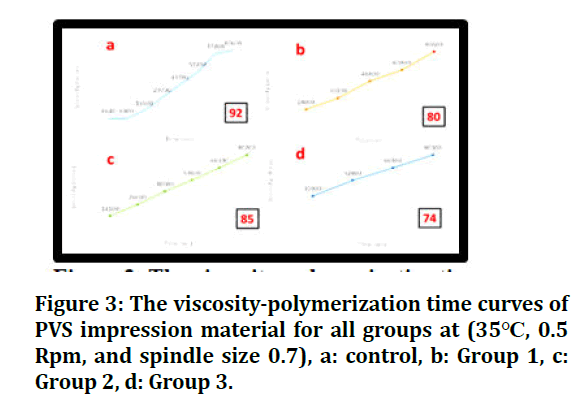 This Figure shows that the polymerization time of the control group was 92 sec. at 35°C while there were decreasing in polymerization time for other groups (groups 2, group 1, and group 3) that were 85 sec., 80 sec., 74 sec. Respectively at the same temperature.

Many types of researches showed some chemical agents might cause an adverse effect on the physicochemical properties or polymerization time of elastomeric impression material. Like Sulphur contamination from latex gloves, latex rubber dam, and some gingival retraction agents like AlCl3, and Ferric Sulphate, then care must be taken to remove all remnants of these medicaments before taking the impression [18-20].

Many authors were encouraged to develop biomaterial gingival retraction pastes with low acidity [6,21,22].

According to the other researches, they have pretended the higher pH of gingival retraction paste could enhance their Compatibility with elastomeric impression materials [20,23].

However, all these pastes were represented as a high compatible since, according to another study, their authors represented the 80% compatibility index as high Compatibility [24].

This result revealed that the Bp was more compatible with PVS impression than AlCl3, the possible causes might be attributed to low acidity of Bp, this result was agreed with other researches, they pretended the low acidity of gingival retraction paste could enhance their Compatibility with elastomeric impression material [20,23].

Furthermore, the compatibility index of group 1 was more than group 3, even though their acidity was very close between them; this result confirmed that the low concentration of AlCl3 (<10) was more compatible with the PVS impression than the higher concentration (15%). This result was agreed with Danuta Nowakowska et al., who showed that at 37 Cº, The PVS impression in contact with AlCl3 had low tensile strength, and high Compatibility was registered for 10% AlCl3. In contrast, 20% AlCl3 inhibited polymerization [24]. Other studies also preferred using AlCl3 less than 10% [22,25,26].

In contrast, Singh et al. showed an adverse effect of Compatibility when the 5% AlCl3 was in contact with PVS impression material after soaking with retraction cords [27].

While Machado et al. concluded that AlCl3 solutions did not exhibit any inhibitory potential on the addition of silicone, most likely, the visual inspection applied in these studies was not accurate enough to prove the interactions between chemical displacement agents and addition silicone impression material [28]. The same authors showed that two agents (20% and 25% AlCl3) resulted in negative PTCI values [29].

Within the limitation of this study, it was concluded:

There was a negative relationship between the acidity of gingival retraction paste and their Compatibility with polyvinylsiloxane impression martial.

Hiba A Salman1*, Manhal A Majeed2 and Eaman A Al-Rubaee1