Introduction: Attention is defined as the mechanism by which we prepare to process stimuli, focus on what to process, and determine how far it will be processed. In addition, it could allow us to determine how one‘s sex influences the risk of developing disorders that manifest and progress differently in men and women.

Methods: This cross sectional study was carried out among 146 late adolescent boys and girls who had completed their school education. Socio demographic data was captured using a structured, self-administered questionnaire. The penns continuous performance test was used to assess the attention wherein participants were asked to observe the flashing letters on the computer screen, one at a time, and to press the spacebar according to the appearance of a specific prescribed pattern.

Conclusion: Our study demonstrated that females had better attention in detecting noise targets compared to men, while men were more likely to be impulsive. However, both the sexes fared equally with respect to sustained attention. The information highlighted in our study will help in detection of learning difficulties and attention disorders in children, and whether it should call us to action a more thorough understanding of the main biological determinants involved in expression of sex differences that can help us to better explain the relationship between brain, behaviour, and environment.

The adolescent male and female brains exhibit different patterns of transmitting, regulating, and processing biomolecules as they are under immense hormonal and physical changes [1,2]. During this period they develop the capacity to hold in mind more multidimensional concept. This is done by the information processing system. Further during this adolescence period the Prefrontal Cortex (PFC) has consistently been shown to undergo continued development. Anatomical changes in the PFC that continue throughout adolescence include increase in grey and white matter volumes, and in myelination of axon fibres within the PFC and between the PFC and other brain areas [3-9]. Subsequently the cognitive abilities that rely on the functioning of the prefrontal brain and their interconnectivity with other regions should also change during this time and reach its maximum development in late adolescent. The cognitive abilities sub served by the PFC is the executive function, which includes attention, decision making, voluntary response inhibition and working memory. Among the various cognitive abilities, attention is of primary importance. Attention is defined as the mechanism by which we prepare to process stimuli, focus on what to process, and determine how far it will be processed and whether it should call us to action. According to Pashler attention refers to the processing or selection of some information at the expense of other information [10].

Sex differences in cognitive abilities have been and still are subject to extensive debate [11]. Many psychological researchers aimed in the middle of the 19th and the beginning of the 20th century at establishing the intellectual inferiority of women in relation to men [12]. Generally, females show advantages in verbal fluency, perceptual speed, accuracy and fine motor skills, while males outperform females in spatial and mathematical abilities [13-15]. Nevertheless, many of the reported sexual dimorphisms have been attributed to various biological factors. Thus, a more thorough understanding of the main biological determinants involved in expression of sex differences can help us better explain the relationship between brain, behaviour, and environment. In addition, it could allow us to determine how one‘s sex influences the risk of developing disorders that manifest and progress differently in men and women (e.g., autism, schizophrenia and parkinson‘s disease [16-21]. Such knowledge can better inform the treatment of these diseases. This study was carried out to evaluate the sexual differences with respect to attention among adolescents.

This cross sectional study was carried out among late adolescent boys and girls who had just completed their school education in Tamil Nadu State Board education. The study was carried out for a period of three years after obtaining approval from the Institutional Ethics Committee of Sree Balaji Medical College and Hospital. Each participant was explained in detail about the study and informed consent was obtained prior to the data collection.

Heads of the private schools in the vicinity of our hospital were approached for the study. A list of students who had cleared their school finals was obtained from the school authorities. The participants were selected by simple random sampling from the list of students. They were of South Indian ethnic population and between age group of 18 to 20 who had completed their 12th grade exams. They had Normal/corrected normal vision with a fluency in English who had basic knowledge/skills in handling computer and mouse.

Exclusion criteria included were any history of disorder or event that might affect brain functioning, medical conditions like hypertension, endocrine disorders, renal disease, cerebrovascular disease, head trauma with loss of consciousness, seizure disorder, migraines, or other neurological condition and also history of schizophrenia or affective illness in participants or first-degree relatives. Participants who obtained a score of 26-30 in Mini Mental State Examination (MMSE), a questioner to evaluate of cognitive impairment, were selected.

A structured, self-administered socio demographic questionnaire was used to capture basic data regarding the gender, age, XII standard marks, and parents’ level of education, handedness, familial history of illness and current medical history of the subjects. A web based interface set up at Sree Balaji Medical College library with Brain and Behaviour laboratory at the University of Pennsylvania after due permission through electronic mail was used for the tests.

The PCPT-NL uses a standard CPT paradigm. It is a measure of visual attention and vigilance based on the Penn CPT [22]. In this task, the participants were asked to respond to targets by pressing the space bar. They were presented with a series of red vertical and horizontal lines in a digital numeric frame (resembling a digital clock) on the computer screen is depicted in Figure 1. 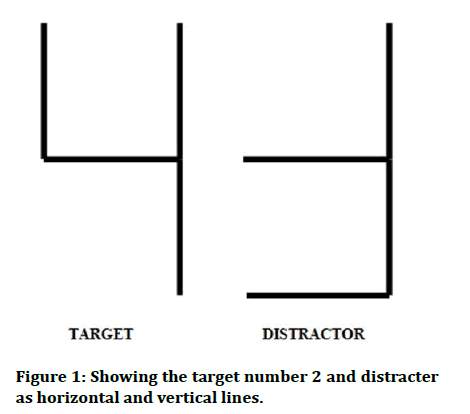 Figure 1: Showing the target number 2 and distracter as horizontal and vertical lines.

They had to press the spacebar whenever these lines formed complete numbers or complete letters. The task was divided in two blocks: one block consisted of tasks looking for complete numbers that lasted for 3 min followed by another set of tasks for complete letters for 3 min also. Each stimulus flashed for 300 milliseconds and a blank page was then displayed for 700 milliseconds that gave the participant 1 sec to respond to every trial. The participant practiced both sets of trials before the task began. Each block consisted of 60 targets (signals) and 120 distractors or non-targets (noise).

From the PCPT-NL tasks the data obtained were

Sensitivity is typically measured with the d’ index, that depends on both the hit rate (H-proportion of responses to targets) and false alarm rate (F-proportion of responses to non-targets). Ideally d’ increases when either H increases or F decreases. The d’ index was calculated by subtracting the standardized H from the standardized F: d’=z (H)–z (F). Then the Response bias was calculated, which is often quantified with β, which is based on a likelihood ratio of changes in H and F. Because β is an asymmetrical measure (i.e., much narrower range of values for a yes bias compared to the no bias), the natural logarithm of β (lnβ) is often analysed instead, such that a negative lnβ indicates a more liberal response criterion (i.e., bias toward the yes response), and a positive lnβ indicates a more conservative criterion (i.e., bias toward the no response). The lnβ index was computed by squaring the standardized H, subtracting the square of the standardized F, and dividing the result by–2: lnβ= –0.5 × [z(H)2–z(F)2].

Data was entered and analysed using SPSS ver.21 software. Mean scores were computed and independent sample t test was used to compare the mean scores between boys and girls. A p value <0.05 was considered statistically significant.

The attention capacity of males and females were measured using the PCPT variables. It comprised of two blocks, first for numbers followed by letters. The Descriptive statistics of both PCPTs Number (N) and Letter (L) are given separately in Table 1 along with the p value and Cohens d. In first Block of PCPT N there was a significant difference in d Prime and OE% indicating females performed better in selective attention. In males and females to compare the performance across the two blocks of PCPT-N and PCPT-L paired t test was done in Table 2 this was to see if the subjects improved in performance in 2nd block to ascertain the capacity of sustained attention. Independent t test was done to see the difference in mean difference of paired t test between males and females in the performance of sustained attention (Table 3). There was difference with respect Mean of TPRT with males performing faster than females. The average of the two blocks of variables of PCPT the number and letter (PCPT–NL) is given is in Table 4, there was no significant difference between males and females.

Table 1: Analysis of variables of attention with respect to gender across two blocks.

Table 4: Analysis of average of two blocks variables of PCPT with respect to gender.

Cognition is essential for daily living and attention forms a crucial aspect of cognition. Individual differences in cognitive flexibility make it necessary to study the difference between adolescent boys and girls with respect to attention. A person’s ability to switch between modes of thought and to simultaneously think about multiple concepts has been shown to be a vital component of learning [25]. In the present study, the participants attended to a series of changing stimuli presented in rapid succession and responded to a specified target while withholding response to nontargets. This comprised of two blocks. The females performed better in the first block (PCPT-N) as the measure of detectability d’ prime and CE% showed significant difference (p=0.01, p=0.04) respectively. Our study demonstrated that females are better in detecting the targets from noise, a measure of selective attention and vigilance; however, our findings did not match the findings of B latter, et al. who observed that men have greater vigilance [26]. The males made more CE that showed their impulsive nature than females; this confirms with Yuan, et al. that women have enhanced inhibitory control [27]. Also, according to Conners, et al. women have been shown to be less impulsive, slower and more variable than men [28].

In sustained attention, there was no gender difference except for less Mean TPRT in males compared to females indicating fast target response by the males, which agrees with Giambra and Quilter, who had observed sex differences in target response time with women slower and less aroused than men [29]. On an average across two blocks of PCPT there was no significant difference in the variables between males and females. Chan RCK. Showed no effect of gender on sustained attention [30]. Waag, Halcomb, and Tyler noted that performance on a sustained attention or vigilance task has often been presumed to be unaffected by sex differences [31].

Our study demonstrated that females had better attention in detecting noise targets compared to men, while men were more likely to be impulsive. However, both the sexes fared equally with respect to sustained attention. The information highlighted in our study will help in detection of learning difficulties and attention disorders in children. Further research to explore the differences in attention specific to disorders will help expand the horizons of cognitive flexibility and develop therapeutic techniques to handle the same.