Correlation between Apical Microleakage and Penetration of Various Root Canal Sealers: An In Vitro Study

A total of 30 human single-rooted mandibular premolars were used as study specimens, the teeth were kept in a 0.1% thymol solution at room temperature till the time of the experiment [10].

A preoperative periapical radiograph (Carestream, USA) was taken for teeth in bucco-lingual directions and mesio-distal direction to ensure the presence of a single straight root canal and exclude teeth with prior root canal treatment, calcification, internal or external resorption [11].

The teeth were horizontally decoronated at/below the cementoŌ??enamel junction (CEJ) by a high speed fissure bur under continuous water cooling [12] to obtain a standardized root canal length of 15 mm [13].

The simulated lateral canals were made by parallel milling machine (bio-art 1000MAX, Brazil), measured and prepared at 3 mm (apical third), 6 mm (middle third), and 10 mm (coronal third) from the root apex by a 0.3 mm active end cylinder-shaped bur [14]. The connection between the outer root surface and the main root canal by simulated lateral canals was identified by a 21mm, size 08 K-file (Dentsply Maillefer, Switzerland) and a periapical radiograph was taken if the K-file did not enter the main root canal, and the specimen was excluded from the experimental procedure [15].

The specimens were accessed then, a size 10 K-file was introduced into root canal until it was just visible at the apical foramen, and the length of K-file was measured, working length was established by subtracting 1 mm from this length [16]. The instrumentation procedure had been done by the crown down technique by Protaper Next rotary system nickel-titanium files (Dentsply Maillefer ,Switzerland) in sequential order from (X1-X2) [11]. The irrigation procedure had been done using 2 ml of 5% sodium hypochlorite (NaOCl) (CHLORAXID, ul. Kwiatkowskiego) was used as an irrigant, and 17% Ethylene diamine tetra acetic acid gel (EDTA) (Dentsply Maillefer, Switzerland) was used as a lubricant during the instrumentation procedure [17].

A coat of nail polish (FloDerm, P.R.C) was carried out on the external surface of specimens except the apical part about 1mm free from nail paint then, after one hour another coat was applied upon the coat of nail paint had completely dried, the specimens were immersed in a 2% methylene blue dye solution for 48 hours [19].

All the specimens were examined under a stereomicroscope (OPTIKA, Italy) at 10X magnification, linear apical leakage from the apex of the root to the most coronal extent of dye penetration was evaluated [21] and measured in millimetres on digital images of specimens that had been captured by an attached camera (OptikamB5, Italy) on a stereomicroscope [22].

The penetration of root canal sealer in simulated lateral canals was examined under a stereomicroscope (OPTIKA, Italy) at 10X magnification and evaluated on digital images of specimens that had been captured by an attached camera (OptikamB5, Italy) on a stereomicroscope [23].

Data were analyzed by the Statistical Package for Social Sciences (SPSS, version 25). Spearman correlation coefficient was estimated to measure the strength of correlation between the penetration depth scores and the apical microleakage scores at a 5% significance level (p <.05). 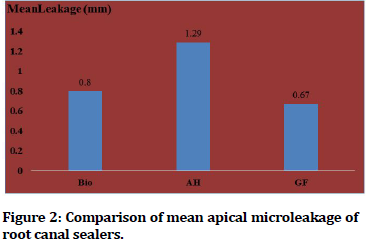 All experimental root canal sealers showed no apical microleakage in various distributions. The highest distribution of score 0 in which no leakage was observed on GuttaFlow Bioseal sealer which was 30.0% whereas TotalFill BC sealer, and AH Plus Jet showed 20.0% as shown in Table 2.

* Spearman correlation is significant at the 0.05 level.

In this study, there is no significant correlation between the penetration depth scores and the leakage scores of AH plus jet sealer indicated that there was no significant monotonically increased association. This could be caused by AH Plus Jet sealer contains epoxide component [24] that has to soften the effect on gutta-percha being as a partial solvent [25], bond with root dentin by adamantine, and good flow ability [26]. In addition to low solubility on complete setting altogether improve the penetration ability into root canal complexities through micro-mechanical interlocking hence, AH Plus Jet sealer only bonds mechanically with the root dentin [27]. On the other hand, fast polymerization reaction and subsequently sealer shrinkage was occurred during an early stage of polymerization reaction resulted in micro gap formation, also this sealer is naturally acidic and hydrophobic while the root dentin is hydrophilic in nature and the dentin-sealer interface is relatively hydrophilic [28]. Hence, adhere poorly to humid root dentin and decrease the ability of complete adaptation and filling of the hydrophilic root canal [29]. Moreover, the sealing ability of AH Plus Jet sealer could be affected by silicone oils resulted in poor wettability and high surface tension [30]. Also, this sealer consists of largesized particles (1.5-8) μm which could not easily penetrate small dentinal tubules, particularly at the apical area hence, high risk of apical microleakage that enhances dye penetration [31].

There is no significant association in TotalFill BC sealer between the penetration depth scores and the leakage scores except in the apical third of the simulated lateral canal (p<0.05) which was p = 0.002 whereas the Spearman correlation coefficient was positive (rho = 0.84) indicated that there was a significant monotonically increased association at the apical third of the simulated lateral canal. This could be caused by the ability of the nanoparticles sized less than 2 μm in diameter of this sealer to penetrate apical dentinal tubules to form micro-mechanical interlocking then, hydroxyapatite formation along the mineral infiltration zone hence, this sealer bonds mechanically and chemically [32].

There was no significant correlation in GuttaFlow Bioseal sealer except between the penetration depth scores and the leakage scores in the coronal third of the specimens (p<0.05) which was p = 0.005 whereas the Spearman correlation coefficient was positive (rho= 0.808) indicated that there was a significant monotonically increased association between the penetration scores and the leakage scores at the coronal third of the simulated lateral canal. This could be caused by the ability of nanoparticles sized less than 30μm of guttapercha, thixotropic property, and physically, it is comparable to the gutta-percha core material. In addition to the ability of this sealer to expand as much as 0.2% after setting hence, filling the irregular spaces of the root canal wall and into dentinal tubules hence, GuttaFlow Bioseal bonds mechanically, physically and chemically with the root dentin [32].

TotalFill BC and GuttaFlow Bioseal sealers showed a significant monotonically increased association between the penetration depth scores and the leakage scores at the apical, coronal thirds of the simulated lateral canal respectively. Hence, if sealer penetration into simulated lateral canal had been increased, apical microleakage had not been decreased which could be due to the advantageous biological properties of calcium silicatebased TotalFill BC and GuttaFlow Bioseal sealers primarily resulted from their bioactivity ability [33] which considered a significant property for chemical bonding resulted from water sorption and solubility even after complete setting resulted in sealer mass loss, decrease dimensional stability, and high risk of apical microleakage [28]. Hence, a negative impact on the sealing ability of root canal sealer [34]. Moreover, the bio mineralization ability has not been absolutely confirmed that the mineral infiltration zone influences the outcome of root canal filling treatment [35], either positively, calcium ions will react with the carbon dioxide forming calcite crystals [36]. Hence, decrease micro gaps and porosity as well as increase the retention of the root canal sealer [37] or negatively, hydroxyapatite formation did not decrease microleakage values due to its porous shape [38].

In this study a single experimental group had been standardized, designed and aimed to evaluate the potential correlation between root canal sealer penetration and apical microleakage in which the same specimens had been made two different experiments to examine two independent variables; hence, it could be possible to evaluate the cause and result in correlation thus, increase the power of statistical analysis since typical correlation analysis is assumed that any random variable factor affects only one subject and this requirement could not possible when two or more different experiments [39].