Materials and Methods: Two groups were included in this study, first group had 40 institutionalized autistic adolescents and second consisted of 40 apparently healthy school adolescents control group with age range (12 years-15 years old, only males) selected with regard to dental caries severity. Each group subdivided into two groups: high caries group (20 adolescents, DMFT ≥ 6 caries) and free group (20 adolescents, DMFT=0)). The amplification of the selected human leukocyte antigen alleles (DQ2, DQ4, DQ5, DQ6 and DR4) was carried out by polymerase chain reaction with sequence-specific primers, the products of were electrophoresed and analysed in agarose gel. The data of current study was analysed using SPSS version 21.

Autism spectrum disorder (ASD) is characterized as constant deficiencies in the social communication interactions and a very stiff repetitive conduct, interests, and the usual activities that appear early in life specifically at the age of three years [1]. The cause of childhood autism is unknown, but it is a multi-system disorder with genetic influence and environmental contributors [2]. Many studies found that institutionalized autistic individuals exhibited low caries rate [3-5]. These findings were also confirmed by Iraqi studies [6,7]. While Al-Yassiri et al. recorded the high occurrence of dental caries amongst individuals with ASD [8].

Even if all the environmental factors are identical and monitored to be under controlled and standard conditions, variability in the susceptibility to dental caries still exists and differs within the tested individuals. This indicates that certain environmental factors are more cariogenic for some individuals as compared to others. This may be explained by the existence of genetic variability among individuals. The genetic influences modify the expression of disease in the individual [9].

The term HLA alludes to human leukocyte antigen system and it is a compilation of genes set within an extended, constant stretch of DNA on chromosome 6. Contrasts in HLA molecules can cause differences in the immune reaction to microorganisms, such as Streptococcus mutans, and may influence the susceptibility of teeth to dental caries. HLA-DR and -DQ gene polymorphism, which results in different amino acid residues, will affect not only the recognition of the peptide by the T-cell receptor but also the interaction between the T-cell receptor and HLA molecules. Furthermore, different HLA alleles may encode HLA molecules with different affinity for bacterial peptides [10]. The HLA system is highly polymorphic that is many different combinations of gene alleles are possible at given HLA loci. Two unrelated individuals are therefore unlikely to have identical HLA antigens. Only siblings may match for similar HLA antigens [11].

As far as, no Iraqi study was conducted among institutionalized autistic adolescents in Baghdad regarding the relation between HLA class II genotype (DQ and DR) and dental caries. For all these explanation, this study was designed.

For all adolescents in both groups, intra-oral assessment of caries experience measured according to criteria of WHO [12]. Evaluation of human leukocyte antigen (HLA) alleles: -DQ2, -DQ4, -DQ5, -DQ6 and -DR4 used primers manufactured by Bioneer Corporation Company in Korea as in Table 1 [10]. The DNA primers were resuspended by dissolving the lyophilized product after spinning down briefly with Tris-EDTA (TE) buffer molecular grad depending on manufacturer instruction as stock suspension. Working primer tube was prepared by diluted with TE buffer molecular grad. The final picomoles depended on the procedure of each primer.

Table 1: Primers used in the PCR for HLA-DR and HLA-DQ alleles

Each participant was asked to vigorously rinse his mouth with water for about 15 sec. to remove food particles. By using DNA buccal swab collection transport tube (CNWTC, China), rub one against his right cheek for 45 sec. Then swabs were immediately frozen at -20°C and shipped to the laboratory [13]. The collected buccal samples were subjected to DNA extraction by using Genomic DNA extraction kit (Favorgen Biotech, Taiwan), DNA extraction was based on the manufacturing instructions of the company.

By using Gradient thermocycler, the programs of Polymerase chain reaction (PCR) were applied as follow [10]:

Preparation of agarose gel and DNA loading was done as described by Bartlett et al. [14]. Then, the amplified PCR products were detected by agarose gel electrophoresis was visualized by staining with ethidium bromide. The electrophoresis result was detected and photographed by using UVP-BioDoc-It Imaging system. The positive results were distinguished when the DNA band base pairs (bp) of sample equal to the target product size.

Statistical analyses were done using SPSS version 21 computer software (Statistical Package for Social Sciences) in association with Microsoft Excel 2013. To measure the strength of association between two categorical variables, such as the presence of certain HLA-antigen and disease status the odds ratio (OR) was used. The statistical significance of the measured OR is assessed by a special Chi-square (χ2) formula. An estimate was considered statistically significant if its pvalue< 0.05.

Table 2 illustrates the distribution of the HLA-DR4 and HLA-DQ2, -DQ4, -DQ5 and -DQ6 alleles among study and control groups with statistical differences. The percentage of HLA-DQ2 and -DQ6 were higher in study group than control group among caries free subgroup, high caries sub group and total subsample with statistical significant differences (p<0.05) for caries free subgroup and total subsample.

Within study group, HLA-DQ2, -DQ6 and DR4 were higher in caries free subgroup than high caries subgroup with statistical significant differences regarding HLA-DQ2 (χ2=3.956, p=0.047). In caries free subgroup and total subsample, the percentage of HLA-DQ4 and –DQ5 were higher in control than study group, while in high caries subgroup, the percentage of HLA-DQ4 and -DQ5 were equally distributed among study and control groups with non-statistical differences (p>0.05). HLA-DR4 was higher in study than control among caries free subgroup, and vice versa among high caries subgroup and total subsample with non-significant differences. PCR detection of HLA-DQ2 and -DQ6 is presented in Figure 1 and Figure 2 respectively. 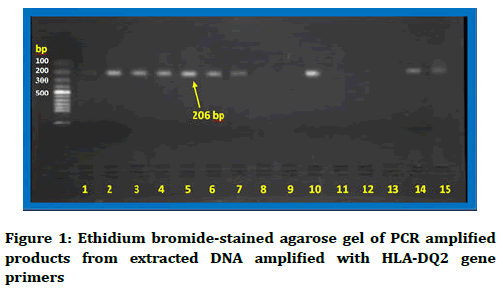 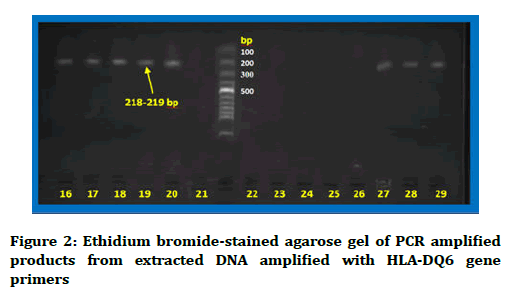 Table 3: Odds ratio and 95% confidence interval for the risk of having autism spectrum disorder (ASD) by selected HLA genotypes

The chi-square test was calculated for comparing the observed (real) frequency of specific HLA-genotypes in cases with ASD and its expected frequency (based on the control group relative frequency of a positive genotype). The magnitude of the calculated chi-square was used to rank the tested HLA-genotypes according to their magnitude of effect on the risk of having ASD. In the first stage of unstratified analysis the HLA-DQ2 was the one with strongest effect size on the risk of having ASD as shown in Table 5.

Table 5: The statistical significant difference between observed (real) frequency of selected HLA genotypes in study group and their expected frequencies based on the control group distribution (Unstratified analysis)

Dental caries is affected by both genetic and environmental factors. Due to hereditary differences, some individuals are more susceptible to dental caries than others under specific environmental factors [15]. Human leukocyte antigen (HLA) play critical role in the immune receptiveness [16]. Immune responses could be with some variations against microorganisms due to dissimilarities in HLA molecules and might affect the susceptibility to dental caries [17]. In the present study, the frequency of HLA-DQ2 and -DQ6 were higher in study group than control group among caries free subgroup and high caries subgroup with statistical significant differences regarding caries free subgroup. HLA-DR4 was higher in study group than control group among caries free subgroup, and the opposite among high caries subgroup with non-significant differences. Within study group, only HLA-DQ2 was higher in caries free subgroup than high caries subgroup with statistical significant differences, which is mean adolescents positive for HLADQ2 allele were less probable to have dental caries, this result in line with Valarini et al. [10] recorded the similar result with HLA-DQ2, because of ethnic disparities might explain the difference, the immunological hereditary repertoire being chosen over time as an outcome of contact to infectious agents. HLA variation can also cause changes in enamel structure. On the contrary, Bagherian et al. [17]) stated that the HLA-DR4 positive subjects younger than 5 years were 10 times more prone to create dental caries than their negative partners. In the same way, Yildiz et al. [18] found that HLA-DRB1*04 and - DRB1*07 frequencies were significantly higher in the DMFT ≥ 1 group as compared with the DMFT=0 group. HLA-DQ2 and -DQ6 expanded the risk of having ASD by 3.10 and 2.54 times respectively with statistical significant differences. whereas, both DQ2 and DQ6 significantly augmented the risk of having ASD by 8.5 and 6.4 times respectively after adjusting for the confusing effect of each other. On the contrary, Lee et al. [19] confirmed that autistic boys and their mothers had a significantly higher incidence of DR4 than normal control group signifying that a maternal-fetal immune interaction could be concerned in autism. Johnson et al. [20] accounted that the HLA-DR4 gene might act in mothers of autistic children in pregnancy to contribute to autism in their offspring.

Because of the difficulty of getting enough of institutionalized autistic adolescents (12 years-15 years old) with DMFT=0 in the same region, the sample was rather small.