The global strategy for Tuberculosis control is prompt diagnosis and treatment of transmissible disease. The mainstay of diagnosis of Pulmonary Tuberculosis is demonstration of AFB in the sputum smears, but not all patients have positive sputum AFB smears despite of clinical and radiological being consistent with Tuberculosis. The prospective, randomized study was designed to study the bronchial washings for microscopy and culture examination for M. tuberculosis and compare with AFB culture of the sputum obtained before bronchoscopy. The Present study focuses on to study the post-bronchoscopy sputum for microscopic examination for acid fast bacilli and to observe if there is any contributory effect to case detection. The present study is done with an aim to verify if the bronchial washings and post bronchoscopic sputum have any additional diagnostic yield in cases of Smear Negative Pulmonary Tuberculosis.

Tuberculosis (TB) is a major health problem around the world, with an approximate incidence of 8.6 million and about 0.94 million TB-related deaths in 2012. India has the highest burden of Tuberculosis and as it is affecting mainly the economically productive population, it has an impact on the country's economy. There are studies conducted 1n foreign countries and India also. The differences in incidence and emergence of resistant forms due to inappropriate treatment of Tuberculosis with changing times warrants for reassessment of the role of these diagnostic modalities [1].

The global strategy to control TB is prompt diagnosis, notification, and successful treatment of patients with active, transmissible disease. Early diagnosis of active pulmonary tuberculosis (PTB) is critical for TB control. According to WHO estimates, incidence of TB cases in India in 2012- 2.2 million (176/100 000 population), prevalence is 230/100 000 · Population with a mortality of 0.27 million (22/100 000 population). Among these new cases, 0.6 million are sputum smear positive [2]. One sputum positive patient can infect 10-15 persons in a year if left untreated. Poorly treated patients can develop drug resistance, potentially incurable forms of Tuberculosis and also spread these resistant forms to others, thus increasing the economic burden on the nation.

The initial diagnostic approach to a suspected case of Pulmonary Tuberculosis 1s to demonstrate Mycobacterium tuberculosis bacilli in the sputum. Even after meticulous search, a large portion of patients remain smear negative (22-67%) for TB in spite of clinical and radiological picture being consistent with diagnosis of Pulmonary Tuberculosis [3]. The reason could be inadequate quantity of sputum or poor quality sputum or sputum being diluted with upper respiratory tract secretions. In those cases, even culture of sputum may not be much contributory. The difficulty is further compounded by the fact that conventional culture of mycobacterium requires 6-8 wks [4]. Reaching a decision to treat is a challenge for physicians treating any of these patients. Anti-Tubercular treatment in these cases can be a potential risk for drug toxicity.

There is an added risk of missing or delay in diagnosis of a potentially curable alternative disease. Early diagnosis and proper treatment of Pulmonary Tuberculosis prevents progression of disease, morbidity, spread of disease and all its complications. In such a situation bronchoscopy has been tried to verify whether we can improve positive results for tuberculosis by taking samples from within the bronchial tree. The idea is that during bronchoscopy the most affected segment can be approached and hence the chance of getting a better specimen without contamination can be obtained and the chances of positivity may be improved. Also separate samples can be obtained from various segments or lobes.

Fiberoptic bronchoscopy with bronchial washings and analysis of it for AFB including culture for Mycobacterium tuberculosis has significant role to establish the diagnosis in those cases where the extensive search for AFB in expectorated sputum has repeatedly failed or those cases where sputum expectoration is absent or the sputum induction has failed. A total of 35 patients with suspected Smear Negative Pulmonary Tuberculosis (according to WHO criteria) were enrolled in the present study. A pre bronchoscopic sputum sample is sent for AFB culture for all the patients. These patients were subjected to fiberoptic bronchoscopy after obtaining an informed written consent. Bronchial washings were collected and sent for AFB smear microscopy and AFB culture and post bronchoscopic sputum was sent for AFB smear microscopy. The data collected was analyzed using the statistics software SPSS version 17.0.

The present study is a prospective observational study.

A total of 35 patients were enrolled into the study.

New smear negative cases, clinically and radiological suspected of Pulmonary Tuberculosis were selected in this study. Detailed history of such patients was recorded including history of Anti Tubercular treatment and any pre-disposing factors. Thorough clinical examination was done. Patients were selected on basis of the following inclusion and exclusion criteria.

• Loss of appetite and loss of weight.

Patients of age more than 18yrs.

Patients willing to be included in the study and willing for the investigations.

• Patients who were severely dyspnoeic.

• Patients with history of taking ATT in the past.

• Patients who are not cooperative for bronchoscopy.

An informed written consent was taken from all the patients enrolled in the study after a proper health education.

Patients who were fitting into the inclusion and exclusion criteria were taken in to the study.

The following investigations were done in all the patients.

• Biopsy for histopathological examination (if needed).

Bronchial washing was performed by instilling 0.9% isotonic saline at room temperature through the internal channel of FOB and aspirated into a trap connected to suction tubing. Usually 15-30 ml of fluid was instilled with each washing and about ¼ to ½ of this volume was retrieved in the suction trap.

The collected bronchial washing samples were sent for

The post bronchoscopy sputum was not submitted for AFB culture for want of funds.

The symptoms of the patients with the percentages are presented in Table 2.

Cough was the most common symptom (91.4%) followed by fever (68.6%) and loss of appetite and weight (57%). The other symptoms included haemoptysis (17%), and chest pain (14.3%). Haemoptysis was found to be common in males (5 /6 patients) and most of them had symptoms for less than 4 wks duration at the time of presentation. 4 out of 6 patients with haemoptysis belonged to the age group 25-34yrs.

The duration of illness of the patients 1s shown in Table 3 and Figure 1 below. 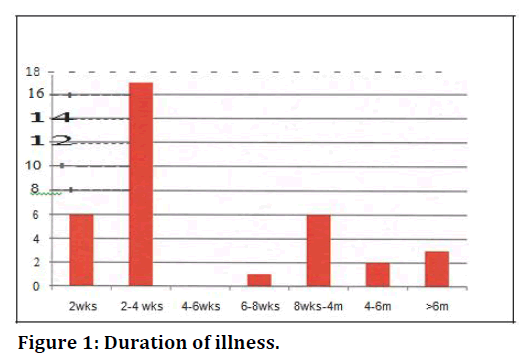 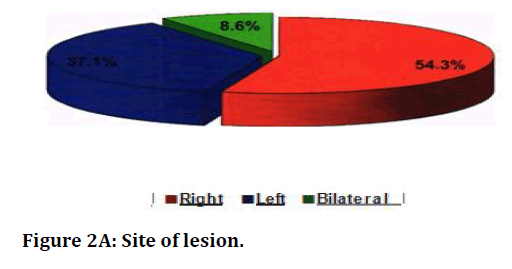 Figure 2A. Site of lesion. 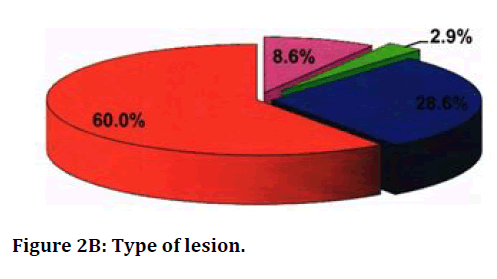 Figure 2B. Type of lesion. 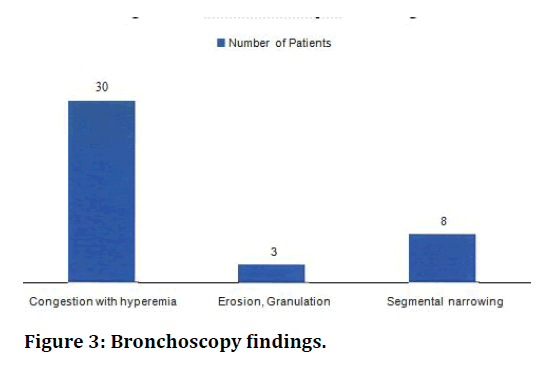 Results of the investigations performed on bronchoscopic specimens

Table 7: Comparison of AFB culture of sputum obtained before bronchoscopy and afb culture of bronchial washings.

Correlation with duration of illness: of the 21 patients who had positivity in AFB cultures of bronchial washings, 17 have symptoms for less than 2 months (P value-0.126) (Table 9).

Table 9: Correlation between duration of illness and bronchial washing results.

Correlation between age and AFB culture of bronchial washings

Correlation between radiological lesions and AFB culture of bronchial washings

Table 11: Correlation between side of the lesion and AFB culture of bronchial washings.

Symptoms of the patients

In present study 85.7% of cases showed congestion with hyperemia of bronchial mucosa on bronchoscopy, 8.6% of patients had erosion , ulceration and granulation on bronchoscopy, while segmental narrowing was observed in 22.9% patients. Some cases had multiple findings on bronchoscopy.

Kulpati et al [4] observed coating of mucosa of involved segments with yellowish white secretions in almost all patients and also revealed mild to moderate hyperemia after bronchial wash. Segmental bronchus was narrowed in 20% patients, and ulceration was seen in 20% patients.

Purohit et al [5] reported that ulceration was seen in 64% of patients and 60% had frothy secretion from the bronchus . A moderate hyperemia of bronchial mucosa was observed in all the patients.

Similar observation was made by Panda et al [6], in their study 44% had normal bronchial mucosa, 21% had unhealthy mucosa with granulat io ns, 35% had mucopurulent discharge from bronchus , 5% had growth , 3% had external compression and 3% had bleeding from bronchus and some cases had multiple findings.

Danek et al. [7] and Purohit et al [5] demonstrated acid fast bacilli in bronchial wash smear in 34% and 42% respectively whereas in study by Kulpa ti et al [4] 40% were positive. In our study 22.8% were positive. All these were confirmed by positive culture. The results of stained smear examination of bronchial washing was confirmed by culture in 100% of cases in the present study, which is comparable to the studies by Kuti et al [4] (100%), Danek et al. [7] (95 %) , Sarkar et al. [8] (7%) respectively. In present study the positive culture rate was 60% only similar to that reported by Kulpati et al [4]. Kvale et al [9] could grow AFB only in one third of the patients of suspected tuberculosis.

Bronchial washings with other parameters