Background: Leprosy is a chronic debilitating granulomatous disease caused by an acid-fast bacillus, Mycobacterium leprae. This disease is known for its mutilating deformities and disabilities that impair the quality of life of patients. Deformities of hands and feet are seen frequently in untreated or inadequately treated cases of Leprosy. Deformities can be trivial like mild muscle wasting and paraesthesia to more severe presentation like trophic ulcer, auto-amputation of digits, claw hands, and hammer toes etc. this study thereby aims at analysing the occurrence of such deformities in previously diagnosed cases of Leprosy in a tertiary care hospital in Chennai.

Materials and Methods: In this study, 54 pre-diagnosed cases of Leprosy with deformities of hands and feet, were included after due consent. A thorough history was recorded followed by a dermatological examination. Photographs were taken and the data was systematically tabulated.

Results: This study comprised of 54 old cases of Leprosy in which, 28 males (51.85%) and 26 females (48.14%) were included. 4 cases (7.4%) each of isolated hand and foot involvement and 46 cases (85.18%) of combined hand and foot deformities were studied. Majority of cases (81.48%) were in the age-group of 41-70 years. All the cases were of Lepromatous Leprosy (LL-HD). 30 patients (55.55%) gave a history of having completed a full course of MB-MDT in the past. The rest (n=24) were inconsistent in their treatment history. Hand deformities encountered were: Claw hands, ulcers, callosities, muscle wasting, twisted fingers, absorption/auto-amputation of fingers, banana fingers, frozen hand etc., Foot deformities encountered were: Hammer toes, foot drop, absorption of toes, trophic ulcers, twisted toes, flat foot, pseudoainhum.

Leprosy or Hanseniasis is a chronic granulomatous condition caused by an acid-fast, gram positive bacillus, Mycobacterium leprae. Recently, Mycobacterium lepromatosis has also been considered as an etiological agent and these two bacilli are now grouped together to form the M. leprae complex [1]. Leprosy affects primarily the peripheral nerves and skin along with affection to numerous organ systems. In 1873, Gerhard Armauer Hansen first discovered the bacillus [2]. Presence of hypo pigmented-anaesthetic patches, thickened peripheral nerves and a positive slit skin smear marks the diagnostic triad of Leprosy.

Leprosy has marked social stigma, primarily due to the associated mutilating deformities that occur in the course of the disease. Deformities like claw hand, foot drop, trophic ulcer, contracture etc., are seen especially towards the lepromatous spectrum. This study has therefore attempted to analyse and stratify such deformities as seen in the outpatient department of a tertiary care hospital of Chennai. The National Leprosy Control Programme of 1955, which was renamed later in 1982 as National Leprosy Eradication Programme has implemented several strategies for disability prevention and rehabilitation of lepers with good results [3]. Although even after years of national strategic programmes, leprosy is not uncommon to be diagnosed in dermatology OPD of southern India.

The study was conducted in the Dermatology OPD of Sree Balaji Medical College and Hospital, Chennai of August 2020 to December 2020. This study recorded details of 54 previously diagnosed and treated cases of Leprosy. A written well-informed consent was taken from every participant. On induction, a history was noted followed by an extensive dermatological workup which included a head-to-toe and neurological examination. The deformities were photographed with care taken of nondisclosure of identity. All known cases of Hansen’s disease with visible deformities of hands and feet were included in the study. Cases excluded were those with no deformities of hands or feet, cases with deformities due to causes other than Leprosy and newly diagnosed cases along with those undergoing active treatment.

Table 1: The distribution of hand deformities among the 50 cases Hansen’s disease.

Table 2: The distribution of foot deformities among the 50 cases of Hansen’s disease.

There was no case with only a solitary deformity of either hand or foot. Every case had a combination of multiple deformities. Along with the above mentioned deformities, a few cases had some associated features as well. 1 male had evident left eye lagophthalmos and right-side facial palsy and another male showed gross unilateral left sided upper limb lymphedema. 2 females had undergone a below-knee amputation owing to chronic trophic ulcers and subsequent osteomyelitis and 1 male had vitiliginous patches on the extensor surfaces of both legs.

Leprosy or Hansen’s disease has been termed Kushta rog in India. The word ‘kushta’ is derived from a Sanskrit word ‘kushnati’ which means, ‘eating away’ [4]. Leprosy has a protracted course with several cutaneous and systemic features. The cutaneous alterations can range from a solitary hypo pigmented, hypo-anaesthetic patch to widespread multiple infiltrative lesions. The bacterial propensity to invade peripheral nerves is the cause of anaesthesia and loss of motor function which forms the mainstay of deformities, (Figure 1). 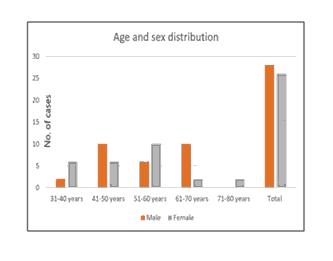 Figure 1: Bar graph of age and sex distribution of cases.

Even after years of relentless efforts, we have not been able to culture the bacillus on an artificial medium. Mouse foot pads and other animal models like ninebanded Armadillo and Mangabey monkeys etc. are still being used for culture [5]. The cutaneous manifestations and associated co-morbidities cause of severe distress. Leprosy has been stigmatised since long which raises misery and psychological impact on patients, (Figure 2). 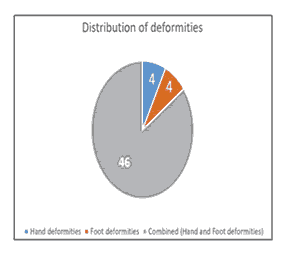 Figure 2: Pie diagram showing the distribution of deformities of hands and feet.

M. leprae does not follow the famous Koch’s postulates in many ways [6]. It is the only bacterium known to affect the peripheral nerves. Once leprosy sets in, the accompanying deformities tend to cause marked impairment of function, (Figure 3). 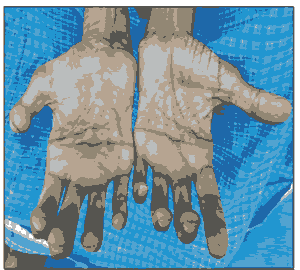 Leprosy presents as a spectrum based on the immunological susceptibility of the individual. The WHO classification of Pauci Bacillary (PB) and Multi Bacillary (MB) disease is based on the number of patches on the body. The ‘Ridley and Jopling classification scheme’ is most widely accepted in practice. Leprosy has been classified into 5 types as per this classification: 1. Tuberculoid (TT), 2. Borderline Tuberculoid (BT), 3. Mid- Borderline (BB), 4. Borderline Lepromatous (BL) 5. Lepromatous (LL). The BL and LL forms of Leprosy are multibacillary which may culminate into deformities if left untreated. Several other classification systems have been proposed with few additional advantages. The Indian classification has highlighted the two distinct forms of Leprosy: Indeterminate and Pure neuritic [7].

The advent of multidrug therapy in 1981 in India has been of definite aid in reducing the incidence and burden of Leprosy. The Enhanced Global Strategy was launched by WHO in 2009, with an aim to decrease the disease burden of leprosy from 2011-2015, targeting to bring down the number of new cases with Grade-2 Disability (G2D) per 1 lakh population by a minimum of 35% [8].

The World Health Organisation has proposed the disability grading in 1970: (For deformities of hands and feet):

• Grade 0: No anaesthesia; no visible deformity or change.

• Grade 1: Anaesthesia present, but no visible damage or deformity.

Furthermore, the definitions of Disability and Deformity have independent distinction [9].

Lack of ability to perform an activity considered normal for a human being of the same age, gender and culture.

Visible alteration in the form, shape or appearance of body due to impairment produced by the disease process.

Deformities of the hands and feet can be further subclassified as follows [9], (Figure 4). 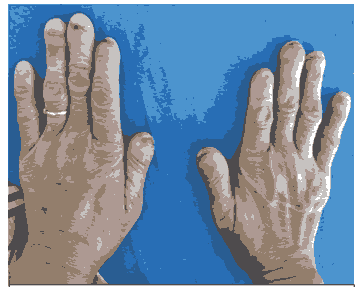 Deformities of the hand

Deformities of the feet

• Impaired sensation and anaesthesia which result in trivial wounds going unnoticed and thereby leading to the development of trophic ulcers.

Factors that make an individual prone to get deformities

Sex: Males are at a higher risk than females.

Duration: Longer duration of active disease can result in deformities.

Type of disease and the immune status of the patient: Poor immunity, immunosuppressive therapy and the lepromatous spectrum of the disease are risk factors.

Occupation: Occupation of the patient which can cause trauma to an accessible anaesthetic part is an important risk factor.

Patient attitude and concerns: Inappropriate attitude towards the occurrence of deformity, can lead to severe damage. Carelessness can arise out of intense apathy for the disease.

Treatment: Inadequate and improper treatment can result in persistence of the disease with the on-going process culminating into deformities.

Nerve paralysis: Nerve paralysis can occur with preceding signs of neuritis, but if it occurs silently without any evident signs, then the loss of function and sensation may go unnoticed and cause impairment. 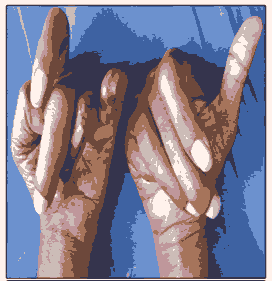 Figure 5: B/L complete claw hand with twisted fingers. A small bulla can be appreciated on the dorsal surface of left little finger. 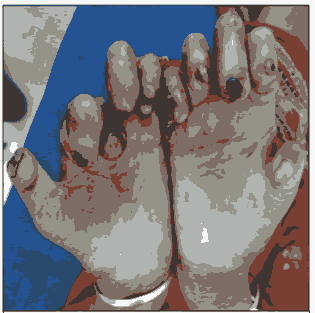 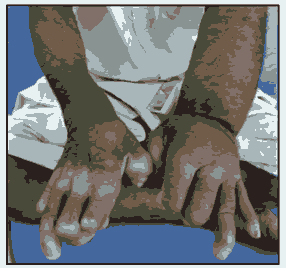 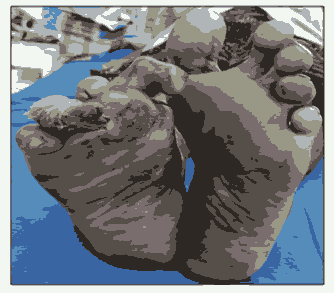 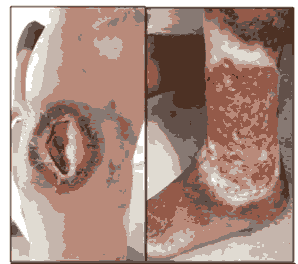 Figure 9: Photographs of trophic ulcers seen on the feet. 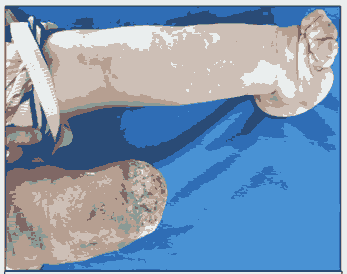 Figure 10: Photograph of a case having right below knee amputation along with mutilating deformity of the left leg.

Existing literature suggests that claw hands, trophic ulcers and absorption of digits are the most commonly encountered deformities of hands and feet in cases of Leprosy. Keen and deliberate efforts have to be undertaken to assure the rehabilitation.

We intend to prompt, that Leprosy and its related deformities is still a deeply rooted problem in our society with substantial impact on social and personal lives of patients. The deformities of hands and feet are by far the most testing for patients. Constant determination to eliminate Leprosy, keen motivation and dynamic future strategies have to be adopted for betterment. It is also pertinent to make note, that after the advent of MDT, occurrence of deformities has been on a steady low. But, those unfortunate with existing mutilations have to be cared for by bringing them in vogue with measures of self-help and rehabilitation. Persistent counselling should be provided to maintain their morale.