Background: The association between gastric cancer and H. pylori infection has been supported in very few studies. In this regard, the present study was carried out in order to examine how of H. pylori infection is distributed among gastric patients.

Methods: The present study was a single cohort in which 190 patients who were clinically diagnosed with gastric cancer were recruited. The patientsâ?? records were utilized in order to collect data on H. pylori infection. The collected data were analyzed through descriptive statistics using SPSS software version 21.

Results: The results indicated that history of H. pylori infection was observed in 63.2% of the patients with gastric cancer. Moreover, prevalence of gastric cancer was more among females (61.5%), residents of rural areas (57.9%), and patients aged over 50 years (73.6%).

Conclusion: H. pylori infection was found to be more prevalent among patients with gastric cancer. Future studies are recommended to focus on larger samples in order to generalize the results in the Kurdistan Region.

It has been reported that gastric cancer (GC), which is one of the most prevalent tumors, afflicts one million new cases every year throughout the world [1]. Given the fact that gastric cancer is diagnosed in advanced stages in most cases and with poor prognosis and restricted therapy options, it is clinically regarded as a major challenging disease all over the world. GC develops in a multi-factorial and complex process, involving some etiological factors and several epigenetic and genetic alterations [2].

Helicobacter pylori infection is referred to as the strongest risk factor that is recognized for gastric adenocarcinoma. Although colonies of this bacterial species can be found in the stomach of over half of the world’s population, adenocarcinoma afflicts only a very small percentage of subjects. H. pylori can lead to chronic gastritis which might last for decades. Moreover, for the most frequent histological type of gastric adenocarcinoma, a multistep precancerous process has been recognized [3].

The present investigation was a prospective study which was carried out through a single cohort that consisted of 190 patients who had referred to Hiwa Hospital during a period of 6 months during 2018. Before conduction of the data collection, each of the patients filled out a consent form.

Required medical data were collected from the patients via a structured questionnaire which was composed of two parts. The first part aimed to gather the patients’ socio-geographical information including their age, gender, place of living, and job.

The collected data were encoded and fed into SPSS version 22, and descriptive statistics including frequency, percentage, mean and standard deviation was utilized.

Distribution of the patients’ age 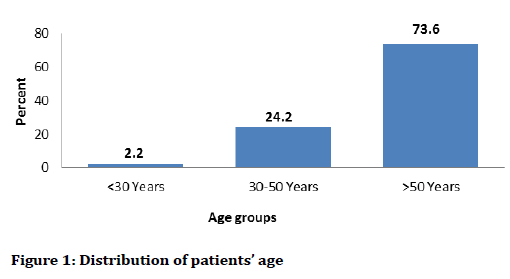 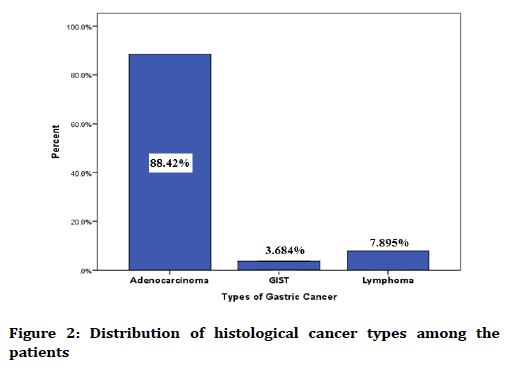 Figure 2. Distribution of histological cancer types among the patients

According to the data analysis, history of H. pylori infection was seen among approximately 63.2% of the patients, whereas 36.65% of them did not have such a history (Figure 3). 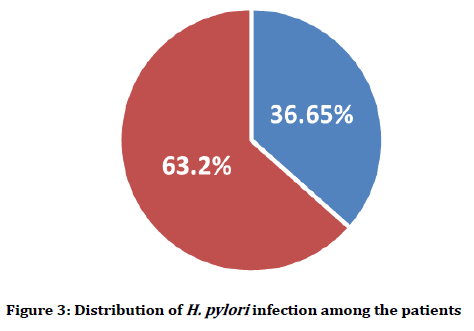 Figure 3. Distribution of H. pylori infection among the patients

Known as the fourth most common cancer, gastric cancer has been reported as the second leading cause of cancerinduced deaths [4]. Suitable management of treatment and increased survival rate can be highly influenced by early diagnosis and consideration of other factors including age, gender, positive family history, and stage.

In the present study, based on the relationship between the patients’ age distribution and gastric cancer occurrence indicated that 73.6% of the patients were over 50 years old, 24.2% between 30 years and 50 years old, and 2.2% under 30 years old, which reveals that there is a positive correlation between age and gastric cancer prevalence. Similar finding has been reported by Zeinalzadeh et al. who studied the association between age pattern and different types of cancer in Eastern Azerbijan province of Iran. They reported 65 ± 13.5 years as the patients’ mean age of gastric cancer [5]. In terms of adenocarcinoma distribution, most of the patients (74.2%) in the present study had adenocarcinoma, while small number of them (25.8%) did not. This finding is in good agreement with those of the study conducted by Rhome et al. who focused on the survival rate among patients with gastric adenocarcinoma in Yazd, Iran. According to the results of their study, 2- and more than 2-year survival rates were respectively 50% and 30% with a mean survival rate of 29.97 [6]. This supports the fact that most cases of gastric cancer were associated with adenocarcinoma [7].

The results of the present study also showed that gastric cancer in more prevalent among females than males. This finding is in line with the previous study conducted by Yu et al. who revealed that the male-to-female ratio of gastric cancer prevalence among Asian GC patients was higher than that of non-Asian GC cases (1.450 vs. 0.614, p=0.01) [8]. Furthermore, the results of the present investigation showed that gastric cancer was more prevalent in rural areas than urban ones. This finding is in not in agreement with those of the study conducted in Spain, indicating higher incidence in urban than rural areas. This discrepancy can be contributed first to the people’s poverty, lack of medical facilities, and lack of knowledge about gastric cancer [9].

A large number of studies have reported a close association between a H. pylori infection and cancer, peptic ulcer, and mucous membrane infection of stomach wall [10]. Although the exact mechanism whereby H. pylori bacterium contributes to gastric cancer development is not completely understood, the World Health Organization (WHO) has categorized this bacterium as group 1 carcinogen [11]. Research has demonstrated that the risk of gastric cancer development in patients with H. pylori infection increases seven folds compared to those who did not have such an infection. It has also been reported that H. pylori infection associated with VacA (valu-locating cytotoxin A) and cagA genes (cytotoxin-associated gene A) leads to more severe infection [12].

Gastric cancer was more prevalent among patients of over 50 years old, females, and residents of rural areas. Therefore, much attention should be paid to early diagnosis and well-organized treatment in these three groups of patients. The most outstanding limitation of the present study was the small size of its sample chosen from only one center, which might limit the generalizability of the findings. In this regard, future studies are recommended to study larger samples.

The authors declare that there is no conflict of interest in this study.