A prospective, randomized study was designed to study the variation in the Uterine, Umbilical and Middle Cerebral artery blood flow pattern in Gestational Hypertension and Preeclampsia. The Present study focuses on to evaluate the efficacy of Doppler velocimetry in early diagnosis of fetal hypoxia and to decide about the time and mode of termination in gestational hypertension and preeclampsia.

Hypertension is a common medical disorder of pregnancy approximately 70% of which are primigravidas. Preeclampsia is characterized by an imbalance between prostacycline and thromboxane production [1-4], as well as failure of the second wave trophoblastic invasion of the endometrio-myometrial vasculature. The result is abnormal uteroplacental blood flow, and this has led to the idea of using color Doppler in the evaluation and management of PIH patients. Doppler ultrasound evaluation of the mother and fetus with the study of blood flow indices provides non-invasive assessment to study uteroplacental circulation and fetoplacental circulation and hemodynamic changes and adaptation in the fetal organs in response to hypoxemia; with this, the degree of placen 1 dysfunction can be studied to know the severity of the disease.

Doppler is useful in selecting the patients for induction and trial of labor, also helps in making decisions when to intervene without increasing fetal risk. This in its effect contributes to lowering maternal morbidity and also neonatal morbidity and lowers the incidence of Caesarean sections and admission to NICU care, and incidence of prematurity. Among high risk patients, several studies suggested a significant decrease in neonatal morbidity and mortality when Doppler evaluation was a part of fetal surveillance [5]. Quality of life for both mother and the new-born has now rightly become our top priority in the field of obstetrics. It is apparent that no greater services can be provided, than ensuring that each new born is well born. The common cause of maternal morbidity and mortality are Hypertensive disorders complicating pregnancy, Haemorrhage and Infection form the deadly triad that contribute greatly to maternal morbidity and mortality. Hypertensive disorders completing pregnancy has been a recognized pathological entity since the time of Hippocrates and ancient Greeks [1]. Hypertensive disorders in pregnancy are one of the major causes of maternal and perinatal mortality and morbidity. It is one of the commonest medical disorders diagnosed by obstetricians in clinical practice [2]. It is said that pregnancy induced hypertension (PIH) contributes to death of a woman every 3 minutes worldwide3.According to National Centre for Health Statistics, Gestational hypertension was identified in 3.7% of pregnancies. It is one of the commonest medical disorders diagnosed by obstetricians in clinical practice [2].

Pregnancy is a high-flow, low resistance state of cardiovascular haemostasis associated with remarkable hemodynamic changes. A progressive fall of vascular resistance in the uterine, placental and umbilical arteries is evident with increasing gestational age, producing high end-diastolic flow. In uteroplacental circulation the main uterine artery is a branch of the internal iliac artery. At the level of the internal os of cervix, it bifurcates into the descending (cervical) and ascending (corporal) branches. At the uterine tubal junction, the ascending branch anastomoses with the ovarian artery to form an arterial arcade. The tortuous accepting uterine artery gives off approximately eight branches of arcuate arteries, which then traverses the outer one-third of the myometrium. The impedance to blood flow in both uterine arteries decreases gradually from early pregnancy until the end of second trimester. More dramatic changes occur in the second trimester, when the uterus begins to grow rapidly, thereby uncoiling the main uterine and spiral arteries. Between 26 and 28 weeks of gestation, uterine arteries reach their maximal dilatation and minimal resistance [6-37].

The uteroplacental flow increases throughout pregnancy from approximately 50 ml/min during early pregnancy up to 450-600 ml/min near term. During normal pregnancy, the trophoblastic cells enter the lumen of the spiral arteries, partially replacing the endothelium and progressing down up to the level of the endometrium. By 16-22 weeks gestation, trophoblasts migrates along the entire length (intramyometrial portion) of the spiral arteries and strips it of its muscular elastic coat [38].

This transformation leads to formation of a low resistance vascular system, progressing from the radial artery into the intervillous spaces; the pressure falls about 70 to 80 mm Hg in the former to 10 mm Hg in the latter. In fetoplacental circulation during fetal life oxygenation is carried out in placenta. The tortuous umbilical cord is the lifeline of fetus. It has two umbilical arteries and one umbilical vein. A considerable amount of oxygenated blood returning from the placenta through the umbilical vein is directed through the ductus venosus to the inferl:"vf vena cava into the right atrium, through the foramen ovale, this oxygenated blood is directed to the left atrium and then to the left ventricle. Blood from the right ventricle is ejected either into the pulmonary circulation or through the ductus arteriosus into the descending aorta.

The fetal cerebral blood flow is of a high impedance, low flow circulation. It is a more sensitive parameter of fetal oxygenation status than umbilical blood flow. The increase in the diastolic component as the pregnancy progresses is interpreted as decrease in cerebral resistance due to brain development. This increase in diastolic component begins later in the cerebral arteries (at approximately 25 weeks) than in umbilical arteries (approximately 15 weeks) [39-46].

This is a prospective study conducted on hundred patients with clinically diagnosed pregnancy induced hypertension for the evaluation of the effectiveness of Doppler studies in hypertension complicating pregnancy with relevance to perinatal outcome undertaken at Sree Balaji Medical College and Hospital, Chromepet, Chennai, in the Department of Obstetrics and Gynaecology, during the period from August 2010 to September 2012.

• All antenatal cases with chronic hypertension.

• Intrauterine death at the time of first Doppler examination.

• Patients who cannot be followed up.

The first scan was performed in each case, as soon as the patient was registered in order to avoid any influence of treatment on Doppler sonogram. The gestational age was confirmed by menstrual history and ultrasound examination and was followed by color Doppler examination.. Consent was taken from the patient or the guardian.

In all patients, a thorough general and obstetric history was elicited and a complete general and obstetric examination was done. All the patients were monitored and for four hourly blood pressure recordings, daily urine analysis, twice weekly blood urea and uric acid and fundus examination. Liver function tests, platelet count, electrolytes, complete hemogram were done once in a week. These investigations were repeated as and when necessary till delivery. Fetal surveillance was done with daily fetal movement count, twice weekly NST and modified Biophysical profile. Further management was done depending upon the severity of preeclampsia and condition of the cervix. USG and Doppler flow velocimetry of umbilical, uterine artery and middle cerebral artery were studies at term, and the mode of delivery, fetal outcome werestudied documented and analysed.

IUGR was diagnosed if there is > 2cm difference in Symphysio fundal height to the clinical gestational age.

The patient was explained about the non-invasive/ atraumatic nature of the procedure. Synthetic ultra-gel was applied liberally over the abdomen to get a good acoustic coupling. The instruments used were Hitachi EUB 5500, Hitachi EUB 7000, Philips Envisor HD C-1.3 Color Doppler ultrasound machine with a convex transducer of2-5: Ml-Iz frequency. Doppler wave form was obtained after localising the vessels by B-mode real time scanner. Pulsed Doppler was used to get the Doppler signals after localising the vessels. The maximum Doppler shift frequencies were obtained and various ratios were calculated from each vessel. Doppler examination was done when foetus was in apnoeic state to avoid the influence of fetal respiration on Doppler signals.

Identification of various arteries and their criteria

Color Doppler facilitates identification of the uterine artery substantially. The uterine signal was obtained per abdomen by pointing the probe in the iliac fossa towards the lower para-cervical area. In the color mode, the uterine artery is seen to cross the external iliac artery, just after its origin frff the internal iliac artery and this point were taken as the sampling point. SID >2.6, RI > 0.58 and persistent early diastolic notch is considered abnormal.

MCA was visualized in transverse axial view of fetal head at a slightly more caudal plane than the one used for BPD. PI <1.3 and RI <0.7 were considered abnormal.

Fetal indications for termination - Evidence of fetal distress either by Biophysical profile or abnormal CTG.

• Birth weight < 10th percentile below the mean for gestational age.

In the present study, out of 100 cases of Hypertension Complicating Pregnancy, 58cases showed positive Doppler indices in any of the three vessels studied. The remaining 42 cases showed normal Doppler indices in all the three vessels studied. The following were the results of the study. From our present study, age group 20-24 years was the common group. The mean maternal age was 25.46 years (Table 1). In the present study, 59 % were prum gravitas, 41% were multigravidas (Table 2).

Out of the 100 cases studied 46% constituted gestational hypertension cases. Mild preeclampsia was seen in 28% of the cases, while severe preeclampsia is seen in 24% of the cases. Eclampsia occurred in 3% of cases. A widely quoted study by Friedman and Neff (1976) showed thatdiastolic hypertension of >95 mmHg was associated with 3 fold increase in fetal death (Table 3).

After studying three arteries, patients were classified into normal and abnormal based on their color Doppler indices. Normal was those with no abnormality in any of the arteries (Table 4). Cases that had any of the following criteria were considered abnormal: 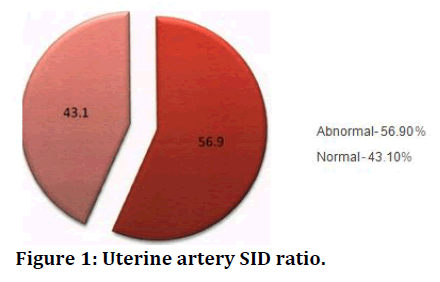 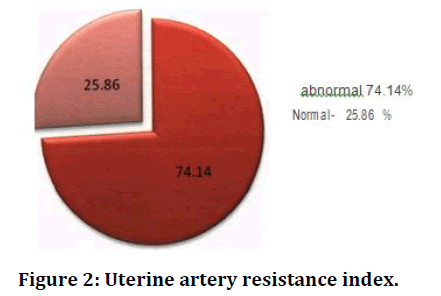 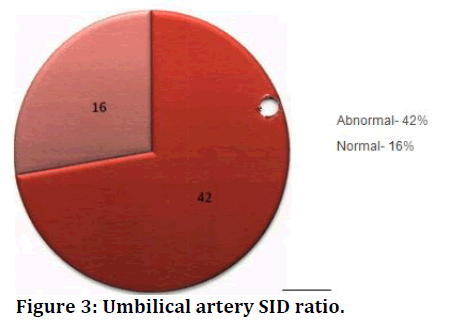 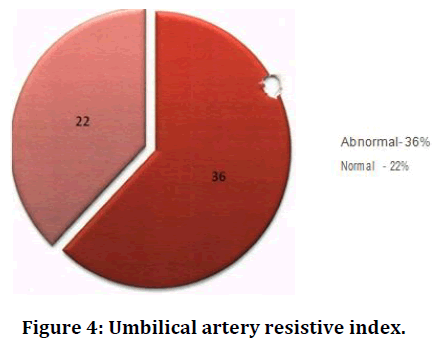 This is a prospective study done in the department of Obstetrics and Gynaecology, Sree Balaji Medical College and Hospital, Chromepet, Chennai. Study duration is for two years, from August 2010 to September 2012. This study is done in a population of 100 pregnant women with gestational hypertension.

In the present study of 100 hypertensive pregnant women, the m an maternal age is 25.46 yrs, which was comparable to other studies. Duen Holter reported that pregnancy induced hypertension was common in very young teenage women. Guzick and associates in 1987 reported that it was common in older women 30-35 Years of age.

Abnormal uterine and umbilical artery doppler flow is associated with severe form of hypertension and higher incidence of IUGR. Abnormal PI of MCA/umbilical artery ratio is also associated with IUGR. RI in MCA is less sensitive than RI in umbilical artery. Maternal complications encountered were abruption placentae, eclampsia and most of the cases needed induction of labour and majority of cases went in for operative delivery. Neonatal complications included birth asphyxia, low birth weight, IUGR, respiratory distress, stained liquor and sepsis which require NICU admissions. Because the changes in the uterine and umbilical circulation strongly correlate with the perinatal outcome, doppler velocimetry is a primary tool for feto-matemal surveillance in hypertensive pregnancy. It is safe, non-invasive technique, easy to perform, easy to interpret, and hence most valuable tool in the management of high risk pregnancy.