Introduction: Dental implants were widely used being considered as successful treatment option for replacing missing teeth. Different methods were used to alter surface morphology and topography to accelerate healing and improve oseointegration. The aim of this study was to assess corrosion resistance and in vitro bioactivity in simulated body fluid (SBF) of plasma nitrided surfaces with and without hydroxyapatite coating.

Material and Methods: Commercial pure titanium grade II surfaces were treated using glow plasma nitride apparatus for 10 h, then coated with hydroxyapatite by dip coating, The electrochemical corrosion test was performed once the samples were inserted in Hank’s solution, the polarization potential and corrosion rate were measured. Treated and coated samples immersed in SBF for 7 days to evaluate the in vitro bioactivity. Phase analysis by X-ray diffraction (XRD) and scanning electron microscope (SEM) have been carried out on the surfaces before and after immersion in SBF.

Results: Coating with hydroxyapatite on pre-nitrided titanium surfaces increases the bioactivity of titanium and increases the corrosion resistance compared to nitrided and untreated surfaces.

Conclusion: Coating on pre-nitrided surfaces can be considered an effective way to enhance the formation of bone-like material on titanium surfaces and increase the corrosion resistance of titanium.

Now-a-days dental implants are considered the most successful treatment option for all concerned patients. Prosthetic rehabilitation of patients with lost teeth to restore functioning and esthetics was the main cause of using implants [1].

Being rather biocompatible and bioinert, titanium, in comparison with other implant materials in use, has adequate yield strength, hardness, little foreign body reaction, and direct connection with bone [2].

In spite of the acceptable success rates of using dental implants, poor bone quality and metabolic disease may result in failure of dental implants. Hence, nowadays researchers are attracted towards surface modification of biomaterial in order to improve the bone-implant contact to enhance immediate or early loading of final prosthesis after placement, and decrease or eliminate the waiting period, which is usually uncomfortable for the patients [3].

After a healing period, an implant is considered osseointegrated, when there is no movement between the implant and bone under normal conditions of loading as a result of direct bone formation on an implant surface without deposition of fibrous encapsulation, which is poorly vascularized collagenous capsule [4].

Titanium has superior characteristics compared to other implant materials, but the osteoconductivity of titanium is less than ceramics, so coating titanium with ceramics is a way to overcome this drawback [5].

Hydroxyapatite coating can accelerate bone regeneration on implant surface. Because hydroxyapatite is a main inorganic component of bone, it can activate the osteoblasts and provide free calcium ions during bone formation [7].

Dip coating is a technique utilized to precipitate ceramic coatings on the implant surface, which can deposit thin layers of coating (less than 10 μm thickness). This method improves the biological activity of the titanium, thence accelerate the osseointegration [8,9].

Simulated Body Fluid (SBF) test is an efficient, suitable, quick and economical test for evaluating the bioactivity of biomaterial. This test was introduced by Kokubo et al. [10]. This procedure involves formation of bone-like apatite layer on the surface of implant which is considered as a positive biological response, the SBF solution represent the inorganic part of human blood plasma [10].

The primary aim of this study was to evaluate the in vitro bioactivity in simulated body fluid (SBF) and corrosion resistance of plasma nitrided surfaces with and without hydroxyapatite coating.

The D.C. power supply in a locally manufactured (Iraq) plasma nitriding system was connected to the cathode once the experimental substrates were placed on the center of cathode. For glow-discharge plasma nitriding, the following parameters were used (nitrogen gas, pressure of 2 × 10-1 mbar, feed voltage of 650 V, current of 0.02 mA, and 10 hours was the selected time for nitriding). Before the beginning of plasma nitriding process, the plasma chamber was evacuated to vacuum pressure of (5 × 10-4 mbar) to confirm the fully removal of the gas-like hydrocarbons, then all the experimental substrates were cleansed by argon (Ar) plasma sputtering for 15 min. The nitriding process started when the nitriding gas (N2) was allowed to enter into the evacuated chamber, the process of flow rate continues until the pressure stabilizes at (2 × 10-1 mbar), and the cathode voltage and discharging current keep on increasing up to plasma formation. At the end of this process, the samples were left to cool in the same gas (nitrogen), where cooling the samples in the same environment prevents oxidation of the nitrided substrates.

8 nitrided disks were coated with HA by dip coating. Preparation of HA solution (HA Particles size 98.5%, <40 μm, sky spring nanomaterial, USA) was performed by dissolving 0.01 gm of P2O5 in 50 ml ethanol with continuous stirring on hot stirrer (Daihan Lab Tech/ Model: LSM-1003, Korea), for half an hour, then 7 gm of HA added to solution with continuous stirring on hot stirrer to obtain homogenous solution, after that the samples were sintered in tube furnace (Carbolite type MTF 12/38 A. Bamford England. Serial No.3/88/432, Maximum temperature 1200°C) at 400°C under inert gas (argon).

Phase analysis was used for all samples (control, nitrided and HA coating on pre-nitrided surface before and after immersion in SBF) by Shimadzu Lab XRD-6000 Powder X-ray diffractometer (Japan), utilizing Cu Kα radiation. The 2Ө angles swept from 30°-80° at one degree increment. The peak indexing was analyzed based on the JCPDS (joint committee on powder diffraction standards).

The assessment of the corrosion behavior in relation to current and potential voltage was carried by anodic polarization plot. Better corrosion resistance is indicated by higher polarization voltage and lower current density. Corrosion rate unit, which is used in this study, is millimeter per year (mmpy).

Data of the experiment were statistically analyzed using SPSS program (version-23). Testing equality of means value by analysis of variance (one-way ANOVA) and LSD were used to compare the significance difference between means in this study, with statistical significance level was set at 0.05.

The XRD analysis of the plasma-treated groups (Figure 1a) detects the presence of TiN phases on Ti surfaces which confirms nitrogen ion implantation in the titanium surfaces as compared with untreated titanium (Figure 1b), while Figure 1c shows HA peaks with Ti peaks. The presence of Ti peaks in the XRD pattern after coating process could be a result of the penetration of X-rays beyond the coated layer. Figures 2a and 3a show formation of HA layer after immersion in SBF fluid for 7 days as compared with untreated and plasma nitrided Ti as shown in (Figures 2a and 3a). On the other hand, Figure 4 shows XRD of HA coated samples on prenitrided surfaces after immersion in SBF for 7 days, which indicates low crystallinity of HA peaks similar to that of bone apatite as compared with XRD of HA coated samples on pre-nitrided surfaces before immersion in SBF, which indicates higher crystallinity and larger particles (Figure 4). 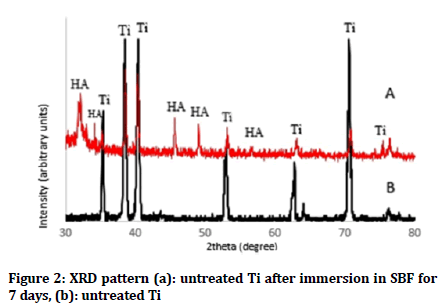 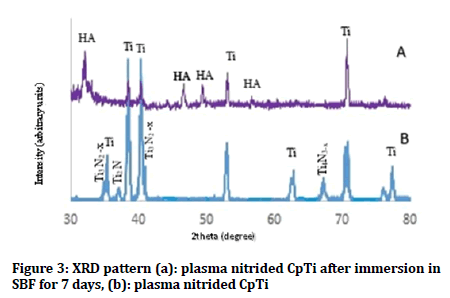 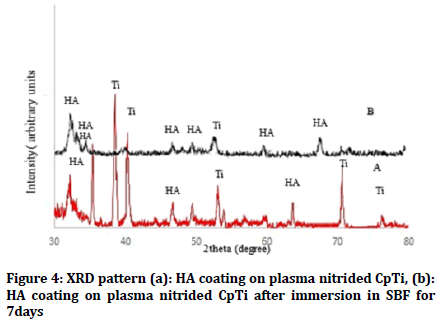 Scanning electron microscope was executed to investigate the surface morphology of the samples. Plasma nitriding surface treatment results in homogenous microstructure of titanium nitride layer with distinct irregularities (Figure 5a) compared to polished surface, which shows polishing marks (Figure 5b). However, the coated samples show even distribution of HA layer over nitrided surface with thin cracks which are observed on the surface of the coated samples. Cracks are usually formed with sol gel coating because of the uneven shrinkage of the gel film during drying and heating treatment (Figure 5c).

The total amount of Ca and P crystals and other elements were measured by EDX, the Ca/P ratio of titanium surface, plasma nitrided surfaces and HA coating on pretreated surfaces after immersion in SBF were 0.82, 1.59 and 2.15 respectively) as shown in (Figure 7). Table 2: Equality of means of corrosion rate by ANOVA for all three groups

Titanium and its alloys are bio inert materials, which result in poor osseointegration, incapable to support bone bonding in long-term implants, and can produce host inflammatory response at the site of implantation by releasing titanium particles in the surrounding tissue. In order to solve these problems and stimulate bone formation for proper osseointegration, titanium implant surfaces are modified or coated with specifically engineered bioactive materials, and various elements may be implanted [11].

Plasma nitride was applied to different alloys such as, Ti6Al4V and CrCoMo, which resulted in enhancement of wear and friction resistance and improvement of surface hardness of Ti6Al4V alloy [12].

Plasma nitride is widely utilized to modify surface topography, and increases the surface roughness and wettability [14].

Surface treatment of Cp Ti via plasma nitride may decrease the non-functional time during healing period after implantation, the patient ’ s discomfort, and the failure rates [15].

According to results of EDX, the ratio of Ca/P of the untreated titanium surface was (0.82) which is less than Ca/P ratio of hydroxyapatite (1.67), while Ca/P ratio of plasma nitrided titanium after soaking in SBF was (1.59), which indicates formation of bone-like crystals, and the Ca/P ratio of HA coating on pre-nitrided surfaces was (2.15), this refers to precipitation of calcium rich amorphous calcium phosphate [16].

Surface treatment of titanium implant by plasma nitride resulted in formation of nitride layer that improves the deposition of calcium phosphate phase, which is considered as a very effective way to enhance the precipitation of bone-like apatite material on the implant surface this result agrees with Cordioli et al. [18].

Oxynitride phases present on the surface of plasma nitrided titanium allows negatively charged surface centers to act as nucleating sites for the adsorption of Ca2+ ions from the body fluid, then incorporation of negatively charged phosphate groups with formation of calcium phosphate [19].

The SBF is similar to blood plasma in that it is highly saturated with calcium and phosphorous which are required to apatite deposition and they have similar ion composition and concentrations in a stable phase, therefore, Hank’s solution as an SBF is a simple test that can be used to understand the initial phase of bone-like mineral formation on titanium surface [21].

Corrosion resistance of plasma nitrided alloy, are higher than those of the non-treated one. The nitride layer provides a more protective, and resistant layer that reduces the ion release rate and alloy toxicity, which agree with Gordin et al. [22].

The samples coated by HA on plasma nitrided surfaces has an increased bioactivity as indicated by the increase in Ca/P ratio, compared to the samples treated with plasma nitrogen ion implantation only. This clearly indicates that surface roughness, which increases surface area along with surface chemistry and similarity of the chemical composition of HA with bone, may have an excellent ability to induce bioactivity of titanium, where this result agrees with Thirugnanam et al. [23].