Background: Overjet considered one of the most important parameters to evaluate the status of occlusion, therefore any disturbances in overjet will affect the occlusion improperly and causing malocclusion. The early detection and diagnosis of overjet discrepancies help in the early treatment of malocclusion. So many studies were achieved to observe the effect of different factors on overjet extent.

Aim: To observe whether the presence of impacted third molars affects the overjet extent. Materials and methods: The study was done on (200) patients with impacted third molars, aged between 18–25 years, for both genders who referred to the radiology department in some dental centres in Baghdad for taking orthopantomograms (OPGs) to evaluate the status of impacted third molars from June 2017 to November 2018. The measurements of overjet were done by a graduated metal ruler on each patient with impacted third molars and the metal ruler is covered by a disposable dental sleeve after each measurement. Overjet estimated from the labial surface of the more lingual positioned mandibular incisor and the incisal edge of the more labial positioned maxillary incisor. A normal overjet range considered in the study was measured between 2-4 mm.

Conclusion: The study concluded that there was no relationship between the presence of impacted third molars and overjet extent.

Overjet was defined as the anterior-posterior space measured through the incisal edge of the most protruded maxillary central incisors to the labial surface of opposing mandibular central incisors. An overjet larger than (3 mm) was decided to be increased [1].

The status of the maxillary and mandibular incisors in harmony to each other and to their related bones is an important characteristic in the analysis of the case, stabilization prognosis of treatment, coordination and, regularity of the facial profile [2,3].

Overjet considered one of the measurable factors used to evaluate the sagittal correlation of the upper and lower dentition. The variation of overjet extent could be skeletal, dental, or incorporation of both. In addition to the facial profile, overjet in adolescents is a significant parameter where the peak of development and determination of surgical or orthodontic treatment is critical. In general, if the overjet is more than 10 mm, surgery is the most suitable decision [4].

The proportion of impacted third molars

Tooth impaction is an abnormal condition in which a tooth cannot or will not emerge into its natural functioning status [5]. The dental impactions are mostly asymptomatic and usually have no clear unusual appearance excluding maxillary incisors [6]. About 25% to 50% of the people are vulnerable to impacted teeth [7,8]. In this way, any tooth in the jaws may be vulnerable to impaction. It was reported that the most commonly dental impactions in jaws are third molars and canines, followed by upper premolars, second lower premolars or upper incisors respectively [9,10]. It was reported that the impacted maxillary impactions found to be about 0.92%-4.3% [7,8]. Some authors stated that if the impacted teeth repositioned into the proper alignment, this will produce a complete anterior dentition with a proper alignment of gingival margins and a good smile [11]

On the other side, the predominance of third molar impaction found to be ranged from 16.7%- 68.6% [12-19] and it considered the most common impacted teeth that can be found in jaws [20]. The only possible interpretation for high incidence rate might be due to the incomplete expansion of the retromolar space [21-23]. Others stated that the third molar impaction in Europe is up to 73% of young adults. (24) In general, third molars found to be emerged in about [17-21] years-old [25,26]. In addition, the emergence period of third molars have been found to differ with ancestries [25-27]. For instance, in Europeans and Nigerians, mandibular third molars may emerge up to 26 years of age and up to 14 years old respectively [27,28].

The eruption time and the different positions of third molars following eruption are not only associated with ancestries but also may be due to with dietary components intake, the force on using the muscular system and hereditary effect [32].

The study was done on (200) patients (106 males and 94 females) with impacted third molars, aged between 18– 25 years. in regardless of gender, who referred to the radiology department in some dental centres in Baghdad for taking orthopantomograms (OPGs) for detecting or evaluating the presence and position of impacted third molars from June 2017 to November 2018.

All patients have been informed for the purpose of the study and all data and information will be used for research purposes and they were agreed to conduct the study. Figure 1. A pie chart shows the distribution of maxillary and mandibular third molars position in the study according to Pell & Gregory classification. 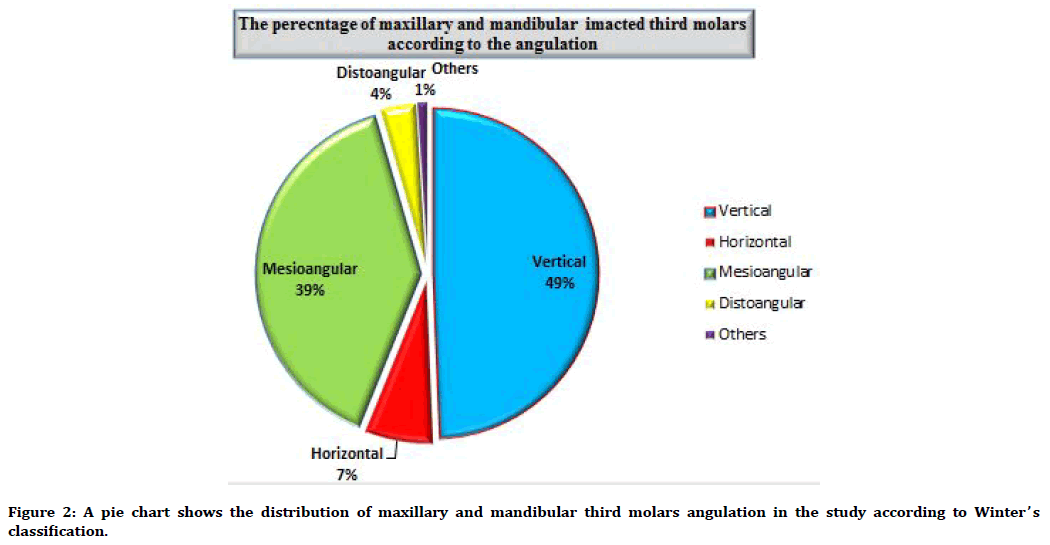 Figure 2. A pie chart shows the distribution of maxillary and mandibular third molars angulation in the study according to Winter’s classification.

The following conditions were included in the study

The following conditions were excluded from the study

• Extensive pathology in the jaws and dentition which may affect the occlusion.

• Patient with moderate to severe mobility of teeth.

• Patients with malocclusion or crowding.

• Patients with presence of parafunctional habits.

The measurements of overjet were done by a graduated metal ruler on each patient with impacted third molars. The metal ruler was covered by a disposable dental sleeve after each measurement. Overjet is estimated as the extent between the upper and lower incisors at the point of utmost severity. It is estimated from the labial surface of the more lingual positioned mandibular incisor and the incisal edge of the more labial positioned maxillary incisor. A normal overjet range considered in the study was measured between 2-4 mm [35].

The results also showed that there was no any significance between males and females regarding the effect of impacted third molars on the overjet distance. The chi-square statistic is (0) and the p-value is (1). This result is not significant at p<0.05 Table 1.

The chi-square statistic=0 and the p-value is 1. This result is not significant at p<0.05.

Overjet measurements are very important because of its value in analysis and treatment plan in case of overjet discrepancies where orthodontic or surgery is necessary.

Harrison et al. stated that it is particularly important to obtain an accurate measurement of overjet to detect the malocclusion [36].

Ingrid et al. observed the association between the overjet and overbite linear measurements and the inter-incisal space restricted by the upper and lower incisors morphology [38].

Terie et al. studied the effect of sever malocclusions (as in sever overjet) on the alveolar bone height [39].

Livia et al. found that the increased exposure to the risk of dental trauma was associated to increased overjet [40].

This conclusion is consistent with the explanation stated that the increase in overjet was due to defect in the growth of jaw rather than it was caused by the malposition of the teeth, but till now, no significant data has been published [41].

The study concluded that there was no relationship between the presence of impacted third molars and overjet extent.