Effect of Stress on Periodontal Health: A Clinical Study

Stress has become a part of one's life, which results in development of depression and anxiety. This psychological stress is generally thought to have a negative effect on periodontal health. The aim of this study was to determine the effect of stress on periodontal health among the dental students. A 10- item DAS (Depression, Anxiety and Stress) questionnaire designed to measure the severity of a range of symptoms common to DAS, a validated questionnaire was distributed among 100 undergraduate dental students of a private college. Followed by, periodontal parameters such as presence or absence of pocket depth of more than 3 mm and clinical attachment loss were assessed. The results obtained from the survey were tabulated, analysed and represented graphically using SPSS software (Version 23). Out of 100 students, 64% of them presented with pocket depth of more than 3mm and 63% of them presented with clinical attachment loss. The association between stress and periodontal parameters was found to be statistically significant. The present study suggests that dental students with extremely severe levels of depression, anxiety and stress presented with increased pocket depth and clinical attachment loss. Therefore, psychological factors have an adverse effect on periodontal health.

Stress is a reaction of a body to a deleterious nature they are found to distract normal physiological equilibrium. It results in development of depression and anxiety. Stress can be acute or chronic, it depends on the individual, Acute stress is the sudden and temporary response of the human body to a stressor which has a defined beginning and end. Exposure to the stress results in an aura response that is characterized by a “fight or flight” reaction. Chronic stress is the response to intermittent and repeated exposure to a stressor over a continuous period [1]. Repeated exposure to the chronic stress has biological cost and can lead to neurobiol immune dysfunction [2].

Periodontitis is a multifactorial disease [3].

It is usually characterised by the destructive inflammatory process that affects the tooth as well as the supporting hard and soft tissues, resulting in the tissue destruction. Periodontal diseases are due to many local or systemic risk factors, the dental plaque being the main causative factor and genetic polymorphisms, socio economic status, tobacco chewing, smoking habits being the threatening risk factors. Stress has shown stronger association with periodontitis [4]. A relationship was established between gingivitis and psychogenic factors such as stress, anxiety, and depression in the 1970s [5]. DeMarco used the term “periodontal emotional stress syndrome” to insist the impact of the stress suffered by the soldiers involved in the Vietnam War on the progression of periodontal disease in them [6].

Oral hygiene depends on the mental health of the patient [7]. It has been reported that psychological factors can lead patients to neglect their oral hygiene which results in a dental plaque build-up, that has a major effect on periodontal health [8]. Studies have shown that the stress generated by university studies results in a decrease in oral hygiene levels and an increase in crevicular interleukin-1β levels. Therefore, the earlier reports conclude that stress is a risk factor for gingival inflammation [9].

This psychological stress is generally thought to have a net-negative effect on the efficacy of the immune response, subsequently resulting in periodontal health breakdown. On the other hand, depression and anxiety are also the most common psychiatric conditions associated with periodontitis and have shown a biological plausibility in the literature.

Student’s life has many benefits, it also imposes stresses that are inevitable. Due to the various factors such as tight academic schedule, competition among the dental students. Who are designated as health professional students, suffer from the burden of achieving various targets amongst them which can lead to the development of psychological stress? This excessive stress in turn increases the prevalence of psychological factors such as depression, anxiety, and substance abuse and suicidal thoughts. Literature suggests that psychological stress has a detrimental effect on oral health [10]; hence, this study was undertaken to assess the effect of DAS over periodontal health indicators among the dental students. Negative life events manifested as psychological stress and depression are common in day-to-day life, emphasizing the relationship between the person and environment [11].

Previously we have worked on plenty of topics in periodontology [12-26]. Now we are planning to work on the effect of stress on periodontal health among the dental students.

A 10- item DAS (Depression, Anxiety and Stress) questionnaire designed based on a previous study [27] to measure the severity of a range of symptoms common to DAS, a validated questionnaire was distributed among 100 undergraduate dental students of a private college. The questionnaire was based on depression, anxiety and stress and all the questions had options 0,1,2 and 3 to be responded, later their scores were summed and assessed in which, score 1: Normal in DAS scale; score 2: Mild in DAS scale; score 3: Moderate in DAS scale; score 4: severe in DAS scale; score 5: extremely severe in DAS scale. Followed by, periodontal parameters such as presence or absence of pocket depth of more than 3 mm and clinical attachment loss were assessed. The results obtained from the survey were tabulated, analysed and represented graphically using SPSS software (Version 23). Then the Chi-square test was done to find out the association between the stress and periodontal parameters. 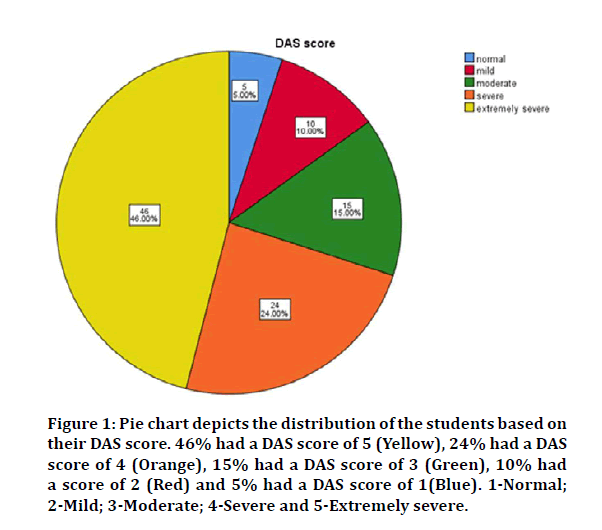 Oral health can reflect the overall health status of a personnel. Periodontal disease Gingivitis and periodontitis, tooth caries are the most common oral ailments. Periodontitis, which is a multifactorial disease, can have various risk factors such as age, diabetes, genetics, and psychological stress. On the other hand, stress has shown a stronger association to periodontal disease which stands proven in the literature [10].

Dental students are exposed to significant stressors. Education in the medical field intends an intensive and competitive preparation of graduates in an attempt to achieve a personally rewarding and socially meaningful career, and hence, various medical programs may have physical and psychological effects on the wellbeing of medical students. Studies has also showed that medical students experience high levels of stress during their undergraduate training [27]. In the current study, dental students have depicted higher stress which in turn increases the periodontal health issues [30].

On the other hand, the academic and professional outcomes are attributed to poor academics and professional dissatisfaction and leads to stress attributed to the stress. On the other hand, dentistry being an art and science in and due to the demanding nature of the training itself evidenced from the research, it was shown that dental students experience considerable amount of stress during training. However, the research confirms that the main effects of stress are attributed to low academic performance and psycho emotional well-being. The fear of poor performance in academics has been the main stressor across the 5-year study period to be the underlying cause of the stress among dental students. Stress experienced by students was the significant workload, and these findings of our study are in coincidence with the study conducted to compare stress levels among medical and paramedical students [31]. However, in contradiction to our findings, there are reports suggesting lower stress levels in dental students than that of medical and Nursing students [32].

Previous studies have shown that academic stress among students can cause gingival inflammation and diminution of the quality of oral hygiene [33]. Apparently, that stress can negatively influence the oral health status [8,34,35]. Participants who are highly susceptible to depression had shown higher values of PD and CAL. This correlation may be due to the negligence of oral hygiene practice under stressful conditions and thereby resulting in increased susceptibility to periodontal disease. These findings are in accordance with the present study.

The present study suggests that dental students with extremely severe levels of depression, anxiety and stress presented with increased pocket depth and clinical attachment loss. Therefore, psychological factors have an adverse effect on periodontal health. Hence, more awareness programs should be conducted among the students to educate about the role of stress on periodontal diseases.

The authors of this study would like to express their gratitude towards everyone who facilitated and enabled us to carry out this study successfully.