Background: PMMA has served as a primary model for the development of other dental materials; the mechanical properties of PMMA appliances and products are less than ideal. To address this issue, various fillers and oxides of silver, titanium, zinc, and zirconia have been incorporated. Therefore, the focus of the current study focused on incorporating tellurium oxide into heat cure PMMA denture base and studying its effect on PMMA properties.
Methods: PMMA properties their samples were prepared and divided into three groups (control and two experimental groups), ten samples for each group, Transverse strength test evaluated by universal testing machine, Impact strength test was performed by using charpy impact testing machine, Portable digital roughness tester (Profilometer device) was used to determine surface roughness and surface hardness measured by durometer hardness tester (shore D hardness).
Results: There is improvement in transverse strength, impact strength and surface hardness and decrease surface roughness after adding 3% and 5% Tellurium oxide compared to samples from the control group.
Conclusion: Incorporating the Tellurium oxide powder into heat cure acrylic material can succeed in producing a heat cure acrylic material with improved mechanical and physical properties.

Dentures made of PMMA were popular because of their ability to be moulded with ease, excellent aesthetics and satisfactory mechanical properties. An ideal denture base material is the one that possesses biocompatibility, excellent aesthetics, superior mechanical properties especially modulus of elasticity, impact strength, flexural strength and hardness, sufficient bond strength with artificial teeth, ability to repair and dimensional accuracy [1,2].

Plenty of research literature is available on denture base resins and considering their inherent drawbacks, several researches have been conducted to improve their physical and mechanical properties by reinforcing with various materials. It has been demonstrated that the inclusion of engineered filler materials (particles, tubes, fibres) in the polymer matrix is capable to modify the material properties [4]. These alterations depend on the filler materials types, concentration, size, morphology, and surface charge [5]. The use of filler composite polymers can offer superior properties to the bulk polymer [6]

Tellurium is a member of the chalcogen family and can be found in four different chemical oxidation states in nature [7].

A novel material was obtained by binding the micro-sized tellurium oxide grains with (Poly Methyl Methacrylate) (PMMA). The mechanical properties of Te/PMMA specimens were investigated.

The study were conducted to choose the most effective and reliable concentration of telluirum oxide by testing transverse strength, impact strength, surface roughness, surface hardness of the heat cure acrylic material's surface after TEO addition. Ten samples were taken for each test and two concentrations of TEO material were used (3% and 5% by wt.) in addition to control group.

Specimen's preparation: Plastic patterns (Disk shaped), 10 × 65 × 2 mm for transverse strength, surface roughness, and surface hardness, 10 × 80 × 4 mm for impact strength. These plastic disks were imbedded in the lower portion of dental flask which already had dental stone (freshly mixed according to manufacturer's instructions W/P ratio: 25 ml/100 g). The excess of stone material was removed and smoothened [8]. When the stone was completely set, the stone surface and plastic patterns were covered with thin layer of separating medium and left to dry, then the upper part of the dental flask was placed over the lower part and filled completely with dental stone (with vibration to eliminate any incorporated air bubbles) and covered with its lid [8]. When the second layer of the stone was completely set, the flask was opened and plastic disks were removed leaving a space in the stone.

Proportioning and mixing of heat cure acrylic (PMMA): According to the manufacturer's instructions (P/L ratio 3 g:1 ml), The amount of PMMA powder and liquid were determined and mixed in dry, clean glass jar and covered with a lid. The upper and lower halves of the dental flask were coated with separating medium to prevent the adherence of PMMA with the stone. After the mixture reaching to the dough stage, kneaded with hands and adapted to the lower portion of the dental flask then packing procedure conducted.

Packing: when the polymer reach to the dough stage, it was kneaded by the hands and placed on the previously prepared mold and covered by sheet of polyethylene, then the upper portion was covered with the lid and continuous pressure of 100 Kg/cm2 applied to it by the hydraulic press to ensure equal distribution of soft lining material inside the mold and for expelling the excess material.

After that the flask was removed from the press and opened, the polyethylene sheet was removed as well as the excess material by wax knife and the stone surface coated again with separating medium and allowed to dry.

Finally, both pieces of the flask were brought in and secured in a good manner and retained to the press machine and left under Pressure of 100 Kg/cm2 for 5 min, and then clamping was done to be ready for curing [9]. Curing of acrylic resin: Concerning curing of acrylic samples, the short curing cycle was used. The curing process was performed by placing the clamped flasks into thermostatically controlled water bath at room temperature then the temperature raised gradually up to 70°C at 30 min and left for 30 min at this temperature in the water bath then the temperature is raised gradually to 100°C at 30 min and left for 30 min at this temperature [11]. After the curing was completed, the flask left from the water path and allowed to cool gradually at the bench until reach room temperature then the flask opened and the acrylic samples removed carefully from the molds.

Finishing and polishing: All acrylic samples used for microbiological and mechanical tests were finished and polished except that for surface roughness test. After deflasking of samples all the flashes were trimmed away from the margins using finishing burs followed by verification of the dimensions with a digital vernier. Then polishing procedure accomplished by ruge wheel using pumice with water at polishing speed of 1500 rpm to prevent excessive heat which distort the samples, until glossy surface was achieved.

To reach the state of standardization, the acrylic samples were stored in distilled water and incubated at 37°C for 48 h prior to the test. 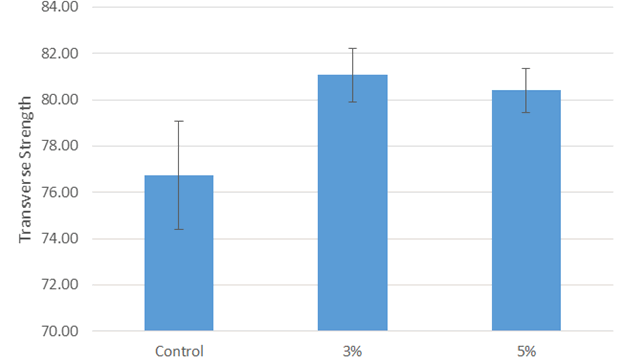 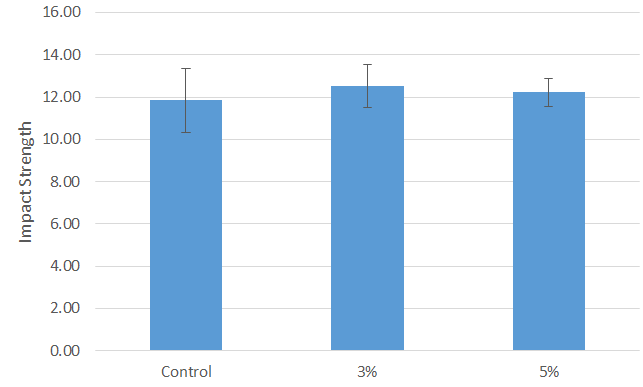 The control group show the lowest mean value (2.49 µm), while the highest mean value was for experimental 5% by wt. incorporation group (2.72 µm) (Figure 3). 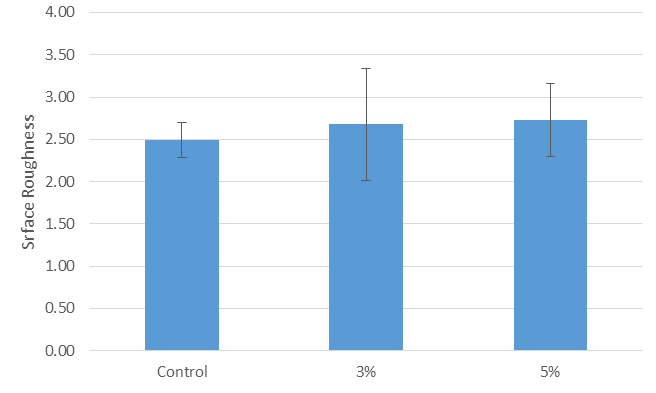 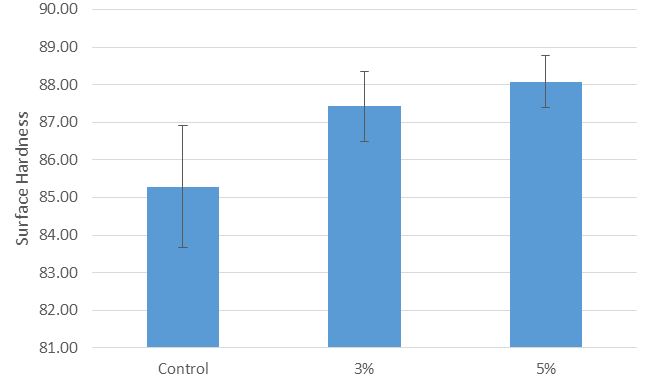 *The mean difference is significant when P value <0.05.

The Polymethyl-Methacrylate (PMMA) resin considered the most widely used material, due to its ease of processing, low cost, aesthetic properties, low weight, biocompatibility, and bio stability in the oral cavity. However, the weak mechanical properties (which lead to wear or fracture) are the major drawback. The inclusion of engineered filler materials in the acrylic matrix could improve the performances of PMMA [15].

The concept behind using filler particles is that changing the size of the filler is responsible for the material's polishability and fracture resistance [16]. The type of filler particles used, their size and shape, as well as their concentration and interaction with the polymer matrix, all influence the properties of the polymer-filler particle system [17]. Filler particles (NP) such as Titanium dioxide (TiO2), Silicon dioxide (SiO2), Zinc oxide (ZnO), Ailver (Ag), Copper oxide (CuO), and others have been added to dental materials.

In this study, Tellurium oxide micro particles were added to PMMA in percent of 3% and 5% by wt. to improve its mechanical and physical properties (transverse strength, impact strength, surface roughness and surface hardness)

Transverse strength of a material reflects the potential of the material to resist fatal failure under a flexural load [18]. this property directly represent the material resistance to fracture because it is a combination of compressive, tensile, and shear strengths [19], so a high transverse strength of denture base acrylic is desired because it enables greater clinical performance by the denture [20].

we found that addition of 3% and5% by wt. of TEO to PMMA significantly increase transverse strength, this increase could attributed to the good distribution of the filler particles, our outcome agreed with the increase in transverse strength that occurs with the addition of 3% TiO2 filler particles to PMMA allows them to interconnect across liner macromolecules chains. The segmental motion of the macromolecular chains was limited, which increased the strength and rigidity of the material, improving fractural resistance and transverse strength [21]. The filler particle ratio utilized for reinforcement should be at a rate that allows it to be disseminated in the matrix resin without disrupting the matrix's continuity [22]. Our study disagrees with when SEM analysis of the specimen fracture surfaces revealed nonhomogeneous dispersion inside the resin matrix [23]. Because of their large specific surface area, surface energy, and chemical activity, filler particles have a strong propensity to aggregate. This clustering resulted in a diminished reinforcing effect on the PMMA matrix. The greater build-up of ZrO2 particles may be attributed to the lower transverse strength compared to the control groups.

Surface roughness is a critical parameter in the surface finish of Polymethyl Methacrylate (PMMA). The initial surface roughness is important because it determines their aesthetic properties and the potential for biofilm adhesion [28]. The study revealed that addition of 3% and 5% of TEO microparticles into PMMA significantly decrease surface roughness of PMMA. This decrease may be attributed to the particles that have very small size and well dispersion within the matrix, also surface roughness test is concerned with outer surface and not with inner surface of composite [25]. Our study results in agreement with [29] they stated that incorporating Al2O3 at four different concentrations had no negative effect on the roughness of the denture base resin. Furthermore, our study disagreed with the findings of Ihab and Moudhaffar, they add ZrO2 particles in different concentrations which increase surface roughness and could be attributed to the different microstructural characteristics of the materials and particle form.

Surface hardness Hardness refers to a material's resistance to plastic deformation, which is typically, measured using an indentation load [30]. It is used to assess wear and scratch resistance. In this study the incorporation of 3 wt.% and 5 wt.% TEO caused an increase in surface hardness values compared to control (0% TEO) group and this increase was statistically high significant for both experimental groups. Surface hardness increased as the filler content increased until the optimal level was reached. This is because the composite agglomerates less when the optimal level of filler for the matrix is achieved using magnetic stirrers and speed mixers [31]. The increase in surface hardness caused by the addition of these filler particles could be attributed to their strong ionic interatomic bonding into the resin matrix [26]. This finding is consistent with previous research, which discovered that adding ZrO2 and TiO2 filler particles in PMMA at different concentrations statistically improved the surface hardness of PMMA denture base [32]. The hardness of dental materials, including acrylic resins, is an important indicator for predicting wear. Low surface hardness influences surface roughness, which increases plaque retention, pigmentation, and eventually mechanical property weakness, compromising its longevity and aesthetic appearance [33]. Our study disagree with a study revealed a reduction in surface hardness upon the incorporation of 10 wt. % ZrO2 and 20 wt.% ZrO2 to PMMA [34].

Based on the results obtained in the present study, the addition of 3% and 5% by wt. of tellurium oxide micro-particles to heat cure PMMA denture base improve transverse strength, impact strength and surface hardness, also this filler incorporation decrease surface roughness.