Aims of this study: This prospective comparative randomized clinical study trained to evaluate the effectiveness of local application of 10mg simvastatin on bone regeneration in the sockets of surgically extracted mandibular third molars by CBCT measuring of bone density three months post operatively. Methods and materials: This study was conducted from January 2019 to September2019. The subscribed patients were 24, 8 of them had bilateral mandibular third molars (MTM) indicated for surgical removal, so the 32 cases were 15 male and 17 female). Cases distributed randomly in tow groups; study (15) and control (17). After surgical removal of the mandibular third molars, the study group treated with local application of simvastatin + gel foam combination in the sockets of surgically extracted MTM, while the control group cases treated with application of gel foam only in their sockets. After three months, the density of reformed bone in the sockets of study group measured and compared with that of control group using cone beam computed tomography (CBCT). The statistical analysis accomplished by using Statistical Package for social Science (SPSS version 21) Results: At three months post operatively, CBCT bone density measurements showed that bone density was significantly higher in study group (486.78 Voxel Value)than in control group (327.00 Voxel Value).There are significant differences between study and control bone density (P-value=0.00). Conclusions: The local application of 10mg simvastatin powder + gel foam combination can increase the bone density in the sockets of surgically extracted MTM and it is safe to be used for ridge preservation after teeth extraction.

The impacted tooth is the tooth that retained beyond its normal average date of eruption [1]. The mandibular 3rd molar considered as impacted tooth when the root formation is completed, while it doesn't have a functional occlusion [2]. The suggested average of eruption time of mandibular third molar is 17-24 years of age. The wide range of eruption time varies due to racial and ethnic variation, and that result the 3rd molar to shows the highest prevalence of impaction because it is the last tooth that erupts in the oral cavity.

Kazemian, et al. [3] proposed the adjacent tooth, hard and soft tissue barriers as the most common reasons for impaction of 3rd molar teeth. The impacted mandibular 3rd molar may associated with pericoronitis, periodontitis, cystic lesions, neoplasms, pathological root resorption, and cause harmful effect to the adjacent tooth. The impacted 3rd molars may accompany with pain, caries, and infections, so, surgical removal is indicated to relieve these symptoms [4]. Surgical extraction of impacted 3rd molar is a common procedure performed in the oral and maxillofacial surgery, bone loss distally to the second molar is a common apprehension, so, preservation or augmentation of the alveolar ridge or bone post extraction is beneficial [5].

After tooth extraction, decreasing in amount of alveolar bone and socket occurs as the result of bone loss [6]. Bone loss comes as an inevitable consequence of tooth extraction that is the result of changes in physiological status of bone [7]. If do not take action to preserve bone and bone regeneration, severe bone loss will happen that makes the requirement of aggressive and costly treatments essential such as bone graft [8].The best time to preserve the alveolar ridge is at the time of extraction. Bone preservation can prevent 40%–60% of the jawbone atrophy that normally happens 2–3 years after tooth extraction and continues at a rate of 25%–15% per year until death [9]. Bone regeneration in the tooth socket is a complex process like the normal fracture healing and bone remodeling. The bone repair process composed of three components: osteo induction, osteo genesis, and osteo conductive matrix [10]. Bone Morphogenic Proteins (BMPs) are the essential regulators of osteogenic cells differentiation during bone repair makes the multipotent stem cells to differentiate into osteoblast like cells. The use of inexpensive pharmacological compounds with less side effects , biologically well tolerated, such as statins ,to enhance an autogenous bone growth factors stimulation was a promising concept [11].

Statins ordinarily use to lower the cholesterol level, Mundy et al., first reported the enhancing effect of statins in (BMP-2) expression in bone cells. statins stimulate neo angiogenesis by causing stimulation of osteoblast, decrease the vascular inflammation, acting as antithrombogenesis agents, and increase the expression of (BMP-2) along with other osteoinductive elements [12].

Different studies have discus the role of statins in bone regeneration, most of them was animal studies carried out in Wister rates, New Zealand white rabbits, mice, and others [13]. All the trials reported positive results for intra, as well as, extra oral sites, such as cranial defects and femur fractures. Human trials also have been carried for periodontal defects, periapical cystic lesions, extracted premolar sockets, and osteoporotic lesions in women. In vitro studies have been initiated to determine the exact mechanism of action [14].

Among statins, simvastatin has been extensively studied, showing pluripotent effects. The mevalonat, which is the result of hydroxy-methyl-gluteryl co enzyme reductase response, is the precursor of cholesterol and some other non-steroidal isoprenoid mixtures, so, the obstruction of this key catalyst can have pleiotropic effects. Simvastatin synthesized by fermentation of Aspergillus terreus, it is non-hygroscopic white crystalline powder, insoluble in water, and soluble in chloroform, methanol, and alcohol. Absorption of oral doses of statins varies from 40-75 % and has high first-pass extraction by the liver. Most of the absorbed dose excreted in bile, and 5-20% excreted in urine. simvastatin is taken orally in dose of 20-40mg daily, the toxic dose is 160 mg daily [15].

Various methods have been tested for the local insertion of statins, which include the use of collagen gel, polyglycol, gelfoam etc. New bone formation around the compound of gelatin hydrogel containing fluvastatin has been reported [16]. The GELFOAM is a water-insoluble, non-elastic, porous, pliable product prepared from purified pork skin gelatin. Initially this material is used as haemostatic agent, it is able to absorb and hold within its interstices many times its weight of blood and other fluids [17]. This study analyzed the management of the surgically extracted mandibular third molar sockets using simvastatin with gelfoam as a carrier material to enhance bone regeneration, the simvastatin dosage was 10mg powder of row material, depending on literature review of the drug [18].

The patients who participated in this study were selected from patients attending the oral surgery clinics in, Department of Oral and Maxillofacial Surgery in the College of Dentistry Teaching Hospital / University of Baghdad, and AL-Sadr Specialized Health Center of dentistry / oral surgery clinic and radiographic work, from January 2019 to august 2019. This study was carried out as prospective comparative randomized clinical study.

Age (18-40), patients with partially or completely impacted mandibular third molar indicated for surgical extraction and Patients who were willing to participate in the study.

All patients were well informed about the objective and technology of the study, they were also informed that they were free to withdraw at any time they want throughout the study, and an informed consent was obtained.

The surgical difficulty evaluated according to two concepts (Table 1 and Figure 1).

Table 1: Distribution of surgical difficulty in control and study group. 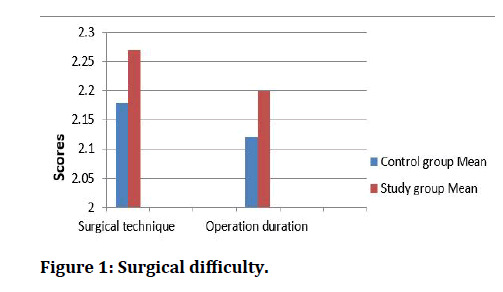 Pain records according to numerical pain rating score collected depending on patients evaluation extending from (0-10) depending on pain intensity felt by patients them self's during seven days post operation. The means of two readings daily of the patient’s pain score distribution in the study and control groups for seven days explained in (Table 2 and Figure 2). 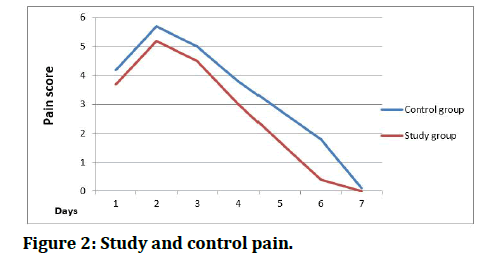 In this study, the bone density for each group depended on to be the mean of bone densities of the total patients in each group, as shown in (Table 3), and explained in (Figure 3). Table 3 shows that the mean bone density in study group is higher than in control group (mean=486.7), there are significant differences in bone density between control and study group.

Surgical extraction of the MTM is one of the most common surgical procedures performed in the oral and maxillofacial departments [19]. Bone loss comes as an inevitable consequence of tooth extraction that is the result of changes in physiological status of bone [7]. The best time to preserve the alveolar ridge is at the time of extraction. Bone preservation can prevent 40%–60% of the jaw bone atrophy that normally happens 2–3 years after tooth extraction and continues at a rate of 15%-25% per year until death [20].

According to this variable, surgical difficulty assessed in relation to the time elapsed between incision and wound suturing, so the surgical duration ranged between less than 15 min which represented as (low=1) to more than 30 min which represented as (high=3). The mean of operation duration is 2.16, which represent as difficult (high). In this research the percentage of difficulty of surgical duration is; easy=18.8%, moderate=46.9% and high=34.4%. The duration of surgery depended on; patient's co-operation, instruments, and equipment’s used, operator experience and different surgical accessibility of patients. There are no significant differences in surgical technique variable between control and study group (p-value=0.199).

Pernambuco, (2017) mention that, the surgical difficulty according to the technique and duration, considered high when both of them are high, or when be high and moderate considerably. According to (Table 1), the maximum percentage and frequency in the surgical technique were in high score. In addition, that was right to the moderate score of the operation duration variable. So, in general, the surgical difficulty considered high for the study and control groups of the study sample.

The outcome of the previous results of pain measures represent that the mean pain values of control group higher than of study group. The researcher idea about these results is due to the anti-inflammatory effect of simvastatin that’s mentioned previously in the discussion beginning. This supported by the studies of Anil, Anisha& et al [21]. Also Toh, Hernández-Diaz [22] in their studies mention the simvastatin role in lowering of pain intensity.

Statins enhancing endogenous bone formation and increase bone density Mundy et al [23]. Statins can promote osteogenic and non-osteogenic cells differentiation, via stimulation of BMP-2 and VEGF resulting in bone tissue formation [24,25]. This study tries to evaluate the effect of simvastatin on bone formation, by measuring the bone density in the sockets of MTM after three months. This done by CBCT, and compare these results (in the study group) with the results of the control group.

The bone density was measured at three month postoperatively, as mean of five pointes readings of VV (Voxel Value)in the socket; (Top (coronal) 2 pointes, Middle 2 points and one point at the apical area of the socket) ,calculated to be depended as mean bone density of the new formed bone in the socket. This reading shows elevation of bone density in the study group (486.78vv), when compared with that of control group (327.00vv). There are significant differences between control and study groups in bone density (p-value=0.00) (Table 3 and Figure 3).

These readings were the mean values of bone densities of each group, and clearly reflect the effect of simvastatin on new bone formation. Several studies aid these results, [26] and Syedand et al. [27] mention that local application of simvastatin with suitable delivery system, in therapeutic dosages for bone formation with virtually no side effects.

Local application of simvastatin induces bone tissue formation in the extracted mandibular third molar sockets. It helps in reducing postoperative pain in the study group when compared with control group. Use of Gel foam as a carrier eases the manipulation of local application. Larger study sample, longer follow up time and split-mouth study design preferred to confirm the results.

Department of Oral and Maxillofacial Surgery, Collage of Dentistry, University of Baghdad, Iraq