The final successful outcome in treatment of root canal relies on complete cleaning and disinfection of the root canal, for the elimination or prevention of apical periodontitis, and termination of patient symptoms [1]. Therefore, mechanical instrumentation of root canal should always associate with canal irrigation, for debridement of those areas that cannot be reached by endodontic files, to eliminate debris and smear layer, and upgrade disinfection [2].

Air bubbles and vapor locks inside root canal prevent fluid movement inside the narrow complex areas of isthmuses, fins, and lateral canals. Therefore, the only successful way to clean these areas, is through improvement of the degree of contact of irrigant with the canal wall, by physical agitation using vibrational movements, ultrasonics, or pulsed lasers [3]. Manual irrigation with a positive pressure, is generally performed using a syringe attached to a side vented needle. While machine-operated irrigation techniques involve ultrasonic, sonic and recent systems of apical negative pressure (ANP) irrigation and laser [4].

The efficacy of 2,780 nm Er.Cr:YSGG laser, which is largely absorbable by water is due to real cavitation effects [7]. Accompanied by the shock waves [8] and along with secondary bubbles that enhance removal of smear layer from areas unreached by endodontic shaping instruments during canal preparation. It appears that laser activation of irrigant can also be achieved using near infrared diode lasers [9]. During laser irradiation of irrigant solutions with 940nm,980nm diode laser, the temperature of irrigation fluid inside root canal rises by up to 30 degrees Celsius [10]. This elevation in temperature improves the chemical reactions of alkaline irrigation solutions like EDTA [11]. This is of specific interest, as these are notably more compact and cheaper than solid-state erbium laser devices. This in vitro study aimed to evaluate and compare the effectiveness of different laser and non-laser-based irrigation activation techniques in smear layer removal from root canal dentine using normal saline and 17% EDTA irrigation solution.

Null hypothesis: There’s no difference in the efficiency of residual smear layer removal from the canal wall between different activation systems with normal saline irrigant solution as compared with EDTA irrigant solution.

Decoronation of samples using a diamond disk (22x 0.4) (Komet Dental. Germany) was to gain a 14 mm standardized working length. A K-File #10 was inserted inside the canal, until the tip observed at the root apical end, then subtraction of 1mm from the measured length. samples were disinfected for 10 minutes using NaOCl 5.25% (Dentaflux, Madrid, Spain), and placed in saline solution (Vitulia 0.9% Laboratorios ERN S.A, Barcelona, Spain) at 6°C. All experimental working steps were carried out by single operator.

Root canal patency was obtained with a K-file#10 (Dentsply Maillefer, Ballaigues, Switzerland) and shaping to the working length was achieved using Protaper Next® rotary instruments (Dentsply Maillefer, Ballaigues, Switzerland) up to X4 (40/.06 size/taper) file and following the manufacturer’s instructions for use. Irrigation were performed with 1ml of 5.25% NaOCl between each instrumentation file during shaping procedure using a 31-gauge 2 side-vented needle (Ultradent,USA) held at 2 mm shorter than the working length.

Activation of irrigants using conventional needle irrigation (CN). Five ml of irrigant (normal saline for subgroup A1, EDTA 17% for subgroup B1) was placed inside the irrigator device (Oralcare, China) and its handpiece attached to 31-gauge double side vented needle.

During all irrigation phases, the needle was placed 2mm shorter than the determined working length.The needle moved 2-3mm up and down, and the flow rate of the device adjusted to be 0.3 ml\sec.

Activation of irrigant using sonic driven Endoactivator. The medium-size polymer tip (25/.04) was used to clean the canals. The tip was fitted passively within the canal, 2mm shorter than the working length, and operated at 10,000 cpm for 60 seconds in three cycles 20min each with pumping action in short 2-3mm vertical strokes.

The laser fiber tip was inserted 2 mm short from the apex, and in contact mode, a helicoidal movement was performed from apical to coronal direction in a speed of 1mm/s, in three cycles, each cycle was achieved in 18 s resulting in a total irradiation time of 54 seconds according to manufacturer instructions and Al-Karadaghi et al. methodology [12].

Activation of irrigation using Diode laser 940 nm. Specimens were irradiated by endodontic fiberoptic tip, (E2) with 200 μm tip diameter (Ezlase, epic x, Biolase, CA, USA), with 4 W panel setting, CW mode; the fiber tip inserted 2 mm from the apex, in contact mode, and helicoidal movement from apical to coronal direction in a speed of 1mm/s. This was accomplished in two cycles 18 seconds each. Resulting in a total laser activation time of 36 seconds as followed by manufacturer instructions and Al-Mafrachi et al. methodology [13].

A total of 5ml irrigation solution (normal saline for group A, 17% EDTA for group B) was used between cycles of activation for all subgroups and the final rinse of 5ml distilled water all in a flow rate of 0.3ml\sec. using irrigator device.

Sample sectioning were performed with diamond disks under 4X magnification dental loops. Two grooves were made on buccal and the lingual root surface until transparent root canal was visualized. Then, roots splitting was performed longitudinally using a single edge razor blade and a hammer into two halves.

The dehydration of specimens was made with ethyl alcohol using ascending concentrations of (30–100%). Each sample was evaluated for residual smear layer under a scanning electron microscope SEM (Tescan, Mira3, 2018 France). The samples were divided into three regions 4mm each represent apical, middle, and coronal then three points were selected from each region as follows:

The selected points were observed under 1000, 5000 x magnification. The images were scored according to the Hulsmann’s criteria which measured the presence, quantity and distribution of the smear layer [14].

The data were collected and analyzed statistically using the Statistical Package for the Social Sciences (SPSS Inc, Chicago, IL version 22).

The given data were qualitative in nature; therefore, nonparametric tests were used.

The inter examiner analysis exhibits good agreement (weighted kappa = 0.86) between both examiners. This indicate that both examiners were accurate. The Kruskal–Wallis analysis detected a significant difference between the different groups (p<0.05). 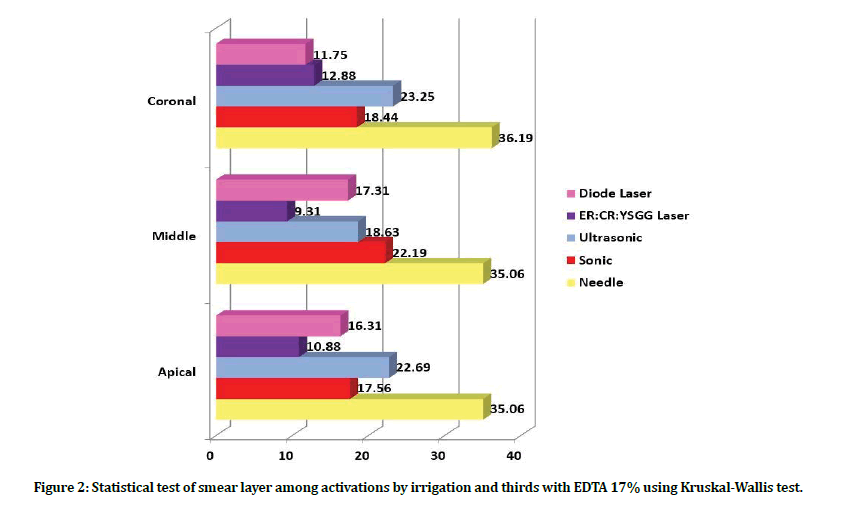 Subgroup A1(CN with normal saline), B1(CN with EDTA) showed the presence of heavy smear layer throughout the length of the canals when conventional needle irrigation method was used with normal saline and with EDTA respectively, which is like a previous study by [15] which presented that needles or syringes used in conventional irrigation performed the least in debris and smear layer removal.

All activation techniques were significantly more effective than conventional needle except diode with normal saline (group A5) which might be due to the lack of interaction or absorption between diode laser and normal saline which is considered as inert solution, therefore no activation of irrigation or dissolution of smear layer [16].

Sonic agitation showed no significant difference to ultrasonic, which is like those reported by Urban et al who reported a similar effectiveness regarding removal of smear layer using #15 EndoActivator polymer tip and #20 ultrasonic tip and #40/0.02 apical sized canal [17]. The result in our study might be due to the limited space for ultrasonic tip in the root canal space to induce agitation of the irrigant fluid.

Regarding different thirds, mean rank varies between coronal and apical levels with significant differences were detected in A4 subgroup (Er. Cr.YSGG with normal saline) where the laser fiber tip makes more contact with the walls and a fused dentinal wall could be produced, and in B3 subgroup (Ultrasonic-EDTA), B5 ( Diode-EDTA), that’s might be due to limited space apically to oscillate and activate the EDTA solution, This finding is in consistent to the study of [19] in which removal of smear layer was significantly better in the coronal other than the apical third, independent of the type activation technique.

The findings in this study reported that the EndoActivator, ultrasonic system increase the efficiency of irrigation significantly better than diode laser with normal saline, which is attributed to the property of diode laser wavelength absorption with no affinity to normal saline. EndoActivator and ultrasonic vibration enhance the effect of EDTA by increasing the depth of penetration through dentinal tubules due to the acoustic streaming. However, they showed no difference with diode laser and EDTA at coronal, middle, and apical third [20].

Er.Cr.YSGG group showed more effective smear layer removal than other groups at all thirds similar to the finding of De Groot et al. [21] and this is suggested to be due to the shockwaves created by dental lasers within root canals that can play an essential role in removal of smear layer causing the initiation of vapor bubbles that expand during initiation of laser pulse and implode after termination of the pulse. The volumetric change in fluid associated with such an inertial collapse, added to the oscillations of smaller bubbles resulting in acoustic streaming, was thought to declare the efficacy of cleaning in m laser activated irrigation by Er.Cr.YSGG. The superior cleaning of the root canal wall was also allowed by secondary cavitational bubbles as they are excited by the bubble collapse of the consecutive laser pulse.

The parameters of diode laser utilized in this study based on the known threshold settings of 940 nm diode laser necessary to induce, cavitation, agitation and shockwaves [9]. The findings in our study illustrate that lasing EDTA solution using 940nm laser considerably improves smear layer removal. This result for the near-infrared laser aligns with previous research work which demonstrated improved removal of smear layer using mid-infrared erbium lasers [22].

It has been reported that the surface tension of the EDTA irrigant can be declined with an increase in temperature; as heating can cause expansion and a decrease in intermolecular attraction facilitates wetting of the root canal walls [23]. The debridement effect of both midinfrared lasers and near-infrared with EDTA could be attributed to temperature raising of EDTA solution along with physical fluid movement, which improves the cleaning efficacy through hydraulic stresses and shear forces activating the solution [24].

Thermal stress study by Al-Karadaghi et al. [25] proved that neither the erbium nor diode lasers when used in this parameters can cause changing in temperature, which would have unfavorable side effects on the health of the peri radicular tissues. On this basis, it is acceptable that the laser agitation protocol used in our study would be sound for clinical use.

Diode laser with 940 nm wavelength used to irradiate EDTA in the root canal system can significantly improve smear layer removal similar to Erbium laser, and this is preferred over sonic and ultrasonic by added photothermal disinfection property. Future studies should investigate the effects of Diode laser using different irrigation fluids to maximize the potential for smear layer removal. This study will open the way for most reliable cost-effective laser activation method compared with Erbium laser.