Introduction: Alveolar ridge defects occur due to maxillofacial trauma, accidents, traumatic tooth extraction, advanced periodontal dis¬eases. These defects when occur in anterior region needs hard and soft tissue augmentation. Though many techniques exist for effective soft and hard tissue augmentation, approach is mainly based on the extent of the defect and specific procedures for prosthetic rehabilitation. Autogenous bone graft is considered as a gold standard tratment for ridge augmentation followed by Fixed partial denture.

In this contemporary era of fitness and elegance, patient’s expectations of self image improvement are leading to increasing standards in dentistry. The partial rehabilitation in the aesthetic zone of the anterior maxilla represents a challenge to the clinician. Loss of teeth in the anterior maxilla results in resorption of alveolar bone from the labial aspect, leaving a palatally positioned alveolar ridge [1]. A deformed ridge results from various factors such as improper tooth extractions, advanced periodontal disease, abscess formations, implant failure, tumor, trauma, congenital disease, etc. The deformity that exists in the ridge is directly in relation with the volume of root structure and associated bone that is missing or has been destroyed. Ridge augmentation is the procedure to reconstruct the defect in the alveolar ridge. Various techniques have been proposed to reconstruct alveolar ridge defect such as bone grafting, guided bone regeneration, orthognathic surgery or bone distraction of which autogenous bone grafts are considered as gold standard in the reconstruction of alveolar ridge defect. The use of iliac or calvarial bone grafting is a cause of major patient discomfort during the immediate postoperative phase 1,2 and may be considered too invasive for ridge augmentation in partially edentulous patients. For repair of most localized alveolar defects, however, bone from the mandible offer advantages over iliac crest grafts. These include the proximity of donor and recipient sites, convenient surgical access, decreased donor site morbidity and decreased cost. Block bone grafts harvested from the symphysis can be used for predictable bone augmentation up to 6 mm in horizontal and vertical dimensions. The range of this cortical cancellous graft thickness is 3 to 11 mm, with most sites providing 5 to 8 mm. The density of the grafts is D-1 or D-2, and up to a three-tooth edentulous site can be grafted. The scope of fixed prosthodontic treatment procedure can range from the restoration of a single tooth to the rehabilitation of the entire occlusion.The conventional options of fixed partial dentures with bridges will not suffice aesthetically when the edentulous anterior portion of maxillary ridge has both inadequate height and width.The aim of this study was to present a case of interdisciplinary approach used for the rehabilitation of anterior missing tooth by using autogenous bone graft and a ceramic crown.

A 24 year male patient reported to the department of Periodontology, Swargiya Dadasaheb Kalmegh Smruti Dental College and Hospital for ridge augmentation prior to fixed partial department from the department of Prosthodontics. Implant was not planned because of inadequate width and height [2]. Also patient needs immediate replacement. The dental history revealed, loss of left maxillary central incisor due to trauma 1 year back and Ellis Class I fracture with right maxillary central incisor. Evaluation of the edentulous space (through clinical and Radiographic examination) revealed siebert`s class 3 ridge defect (Combination of both buccolingual and apico coronal loss (both width and height) In order to create an emergence profile and soft tissue contour around the fixed partial denture, the ridge defect was planned to be corrected using autogenous bone block.

Bucco-lingual ridge defect width was recorded clinically with the help of the manual Williams graduated periodontal probe at baseline and 6 months after ridge augmentation surgery .Alveolar ridge defect width was recorded at 4 sites viz: Crest, 1mm, 3mm & 5 mm apical to the crest of the defect by placing one probe horizontally across the buccal/labial surface parallel to the crest of the ridge and other perpendicular to it. (figure 1). 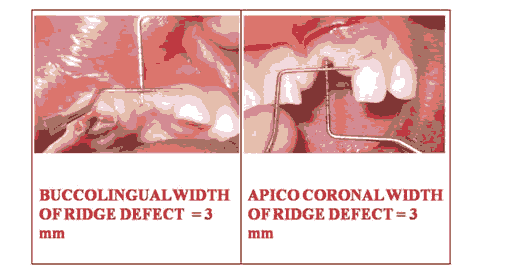 Figure 1: Bucco-lingual ridge defect width was recorded clinically with the help of the manual Williams graduated periodontal probe at baseline and 6 months after ridge augmentation surgery.

After induction of local anaesthesia (block and infiltration with 1:1,00,000 epinephrine) using a Bard Parker Surgical blade # 15, a mid crestal incision was made slightly palatal to the crest of edendulous site. Vertical divergent releasing incisions were made extending to the vestibule. The papillae of the adjacent teeth were included in the flap design to allow maximum exposure of the surgical site enabling controlled placement of bone block and assisting predictable wound closure. Full thickness mucoperiosteal flap was elevated buccally.(fig. 2 a) The bony crest was curetted to remove all soft tissues. A sterilized piece of tin foil was placed over recipient site as a surgical template. It was manipulated, cut and adjusted to the configuration of bony defect and used for harvesting Autogenous boneblock of same size from donor site using a small round bur. The facial cortex was perforated to open up the bone marrow cavity to induce revascularization and influx of growth factors and platelets to enhance bone neogenesis [3].

Briefly after induction of anaesthesia in the symphysis region by inferior alveolar nerve block/ mental nerve block with local anaesthesia (block and infiltration using 2 % Lidocaine with 1:1,00,000 epinephrine ), a curved incision was made with a Bard Parker blade # 15 apical to the mucogingival line and full thickness flap was reflected to expose the symphysis region.(figure 2b) Once the symphysis was exposed, the template was placed over the bony cortex.(fig2c.)

It was located at least 5 mm away from the inferior border of the mandible, 5 mm from mental foramen, 5 mm from midline spine and 5 mm from the apices of the teeth. The midline spine (protrusion) was preserved to ensure sanctity of the posture of the lower lip and preservation of the labio-mental fold.

A ½ round, high speed bur under copious irrigation was used to outline the periphery of the template at a right angle to the bone surface, followed by a 701 surgical-length bur to connect the dot.(fig.2d) When the outline was completed the osteotomy was deepened into the marrow space. Tactile sense, as well as bleeding from the outline form indicated penetration into the marrow space.

Once this communication was completed, Ochsenbein Chisel was tapped into the outline with a mallet. During tapping phase, patient was asked to clench the teeth in centric occlusion and chin was supported during the tapping phase, which was started in one of the vertical cuts.

The inferior osteotomy was avoided or reserved for last to prevent any danger to the border. If during the tapping, the osteotome refuses to advance, it was probable that the marrow space has not been reached. The osteotome might be too thick.

After tactile purchase has been achieved around the entire periphery with the osteotome, it was used as a lever to elevate the graft. When some mobility was noted at the first site same strategy was used on the opposite side. This maneuver was employed at a variety of sites until block became mobile.

After elevating the graft from the donor site, it was stored in a mixture of saline and the patient’s blood, with addition of 80 mg gentamicin.(fig. 2e) The sharp bony edges at donor site were smoothened and primary wound closure was accomplished with mattress or single interrupted sutures [4]. 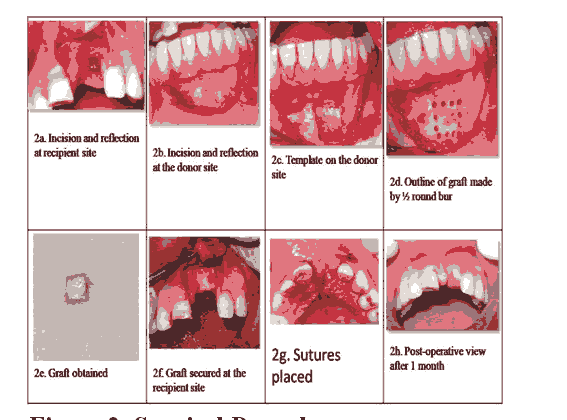 Placement of bone block at the recipient site

In this case, the patient had high esthetic expectations, Gin¬gival-colored porcelain was used to metalbasederamic crowns to compensate soft tissues on the maxilla. (Fig.i).

Then the prosthesis was checked for any occlusal discrepancies and was restored. (Fig.j) The patient was instructed to maintain proper oral hygiene , including dental floss and interproximal brushes designed for fixed partial denture.

The esthetic out¬come of the procedure satisfied both clinician and patient [5].

Figure 3: a) Diagnostic impression was taken; b) Teeth preparation done on maxillary right central incisor; c) maxillary left lateral incisor and ca¬nine region; d) Gingival retraction was done; e) Final impression was taken and temporary prosthesis was placed; f) Provisional restoration was given; g) Metal try-in was done; h) In this case, the patient had high esthetic expectations, Gin¬gival-colored porcelain was used to metal-based ceramic crowns to compensate soft tissues on the maxilla; i). Then the prosthesis was checked for any occlusal discrepancies and was restored; j) The patient was instructed to maintain proper oral hygiene.

Large vertical and horizontal bone defects in missing teeth are not successfully treated by conventional fixed or remov¬able prosthesis alone as well as don’t fulfill the patient’s esthetic requirement. Autogenous bone grafts are considered as a gold standard for the management of such defects. Autogenous bone grafts have been used extensively in the restoration of alveolar atrophy and repair of bone defects and continue to be the gold standard for jaw reconstruction4,5. Autogenous bonegraft can be harvested from extraoral (Triplett 1996)2 or intraoral (Misch et al 1993, Simion et al2007)6,7donor sites. Several studies have confirmed that intraoral harvested intramembranous bone grafts, in particular mandibular bone graft, when compared with extraorally harvested endochondral bone graft (Borstlap et al 1990,Misch et al 1997)8,9results in an improved quality of bone with a shorter healing period. Bone harvested from the mandible appears to have inherent biologic benefits attributed to its embryologic origin (Avery 1994)10Experimental evidence suggests that graft from membranous bone show less resorption than endochondral bone (Lin et al 1990)11. Although cancellous graft revascularize more rapidly, than corticial grafts, cortical membraneous grafts revascularize more rapidly than endochondral bone grafts with a thicker cancellous compartment. This early revascularization of membraneous bone grafts is possible explanation for the improved maintenance of graft volume. It may explain why mandibular bone graft, which are primarily cortical bone and contribute few osteogenic cells, exhibit little volume loss and show good incorporation at shortest healing time (Jensen et al 1994, Smith and Abramson 1974)12,13. Others theorize that the improved survival of membraneous bone graft is due to their 3 dimensional structures (Manson et al 1994)14. Since, the symphysis region is a source of cortical and cancellous bone that can be used as a predictable donor site and technique of harvesting bone is significant as well as beneficial procedure, in the present study autogenous block was obtained from symphysis region of the mandible. Conventional tooth supported FPD may be an ideal treat¬ment option where implants are contra indicated or patients refuse the implant therapy due to its surgery, and long time to complete the treatment. However, Natural abutment teeth with sufficient bone support are necessary for these kinds of prosthesis. Moreover it reduces treatment time and cost.15

Presence of spacing in the midline makes esthetic replacement a great challenge to the dentist. Use of innovative techniques to achieve esthetic results in fixed partial denture treatment procedures makes loop connectors a suitable and a viable treatment option. Successful ridge augmentation helps to improve esthetic prosthetic rehabilitation. In the present case combination of perio-prosthetic management has helped to improve esthetics.