Background: Immune thrombocytopenic purpura (ITP) is an acquired disorder that causes platelet degeneration by mediating immune responses and possibly inhibiting platelet release from megakaryocytes. The role of Helicobacter pylori in the development of ITP is not well-known, and there are many hypotheses about the mechanism for creating ITP due to Helicobacter pylori infection. Regarding the contradictory results of various studies, we decided to investigate the effect of Helicobacter pylori root cytotoxic treatment in ITP infected patients.

Methods: This study was a clinical trial on 115 approved ITP patients. Stool antigen tests (SATs) were used to screening for H. pylori infection. Infected patients were treated with standard Helicobacter pylori regimens for 14 days and then followed for 6 months. During this period, the number of platelets was counted. Data were analyzed using SPSS, T.TEST software.

Results: In this study from 115 patients, 20 patients with positive HP without eradication therapy (as first group), 45 patients with positive HP with eradication (group 2) and 45 HP negative patients (group 3) were studied and 5 patients were excluded. The mean age of patients in the first group (35.47 ± 16.86) years, in the second group was 12.3 ± 42.72 years and in the third group was 37.60 ± 11.99 years. The average number of platelets in all of three groups was ascending. In the intergroup study with the value of p=0.001, the average platelet count in the second group was significantly higher than in the other two groups. In the second group, after the second month of treatment, platelet changes began to be stable at the normal level. On the other hand, the difference between the first and third groups was not significant (p=0.774)

Conclusion: Helicobacter pylori eradication has a positive effect on the increase in the number of platelets and its persistence.

Helicobacter pylori is a spiral-shaped microaerophilic Gram-negative bacterium that found in the deep parts of the gastric mucosa. This germ may be attached to the gastric epithelium, but does not invade the cells in normal conditions. The end result of this infection is the development of gastritis, gastric cancer and mucosaassociated lymphoid tissue (MALT), catch these cases depends on the bacterial and host factors [1]. Helicobacter pylori infection is the most common infection in the world. 50% of the world's people are infected with this bacterium. The source of this infection is human. Infection with Helicobacter can occur in any person [2]. H. pylori has been involved in the development of various systemic disorders, including autoimmune diseases such as Immune thrombocytopenic purpura (ITP), Sjogren's syndrome rheumatoid arthritis, and Schonlein-Henoch purpura, iron-deficiency anemia, chronic urticaria, cardiovascular diseases, and neurological disorders [3]. The Immune thrombocytopenic purpura is an acquired disorder that causes the destruction of the platelet through immune reactions and possibly the prohibition of platelet release from the megakaryocytes. Chronic ITP is more common in adults [4]. If ITP is associated with an underlying disorder, it is called secondary ITP. Autoimmune disorders, especially lupus and infections like HIV-HCV, are common causes [5]. Eradication of H. pylori improves thrombocytopenia in some patients with immune thrombocytopenic purpura but its mechanism is unknown. Many hypotheses have been advanced about the mechanisms that H. pylori may cause ITP [6]. Regarding the contradictory results of various studies, there are many studies that have not been carried out in our country. Therefore, we decided to investigate the effect of Helicobacter pylori root cytotoxic treatment in ITP infected patients in hypertensive specialty and Arak cancer.

ITP diagnosis was according to the American Society of Hematology guidelines [7]. The inclusion criteria included platelet count of less than 109 × 120 μL, and having symptoms in favor of ITP including bone marrow testing indicating benign hyperplasia, Pass 6 months from the onset of clinical symptoms, normal thyroid and liver tests, and having the normal number of white blood cells, hemoglobin and red blood cell.

Patients were excluded from the study if they had Family history of thrombocytopenia or autoimmune disease, HIV infection, hepatic disease, drug induced thrombocytopenia, previously received H. pylori eradication therapy from two years ago to now and taken antibiotics or protein pump inhibitors in the last 4 weeks.

During this period, the number of platelets was counted every 30 days. After completing the check list, data analysis was performed on SPSS version 20. According to the research objectives, we obtained descriptive statistics including tables and charts and dispersion index and central indicators. Differences in age and disease duration between groups were analyzed by the ANOVA test, and differences in sex were assessed using the χ2. Changes in platelet count were analyzed by the repeated measures analysis of variance. p<.05 was considered to be statistically significant in all tests.

In this study, duration of each thrombocytopenic patient was recorded. The average duration of thrombocytopenia in the first group was 25.94 ± 17.99 months, in the second group was 20.57 ± 15.72 months and in the third group was 18.53 ± 16.34 months. Data analysis with ANOVA test showed that there was no significant difference between the three groups in this regard (p=0.391) (Figure 1). 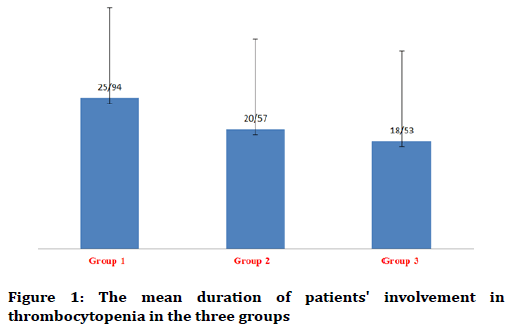 Figure 1. The mean duration of patients' involvement in thrombocytopenia in the three groups

Data analyzing on the number of platelets using Repeated measure analysis and, the Wilks' lambda test showed a change in the mean number of platelets in the three groups (F=1.167, p=0.001). It was observed that the average platelet count in the second group was significantly more than the other two groups; the mean platelet of Group II was changed from 103.95 ± 42.31 in the beginning of the study to 195.10 ± 90.10 in the end of the study (Table 1).

Repeated measure measurements were used to check the platelet count in the groups and to check the difference between them. The number of platelets was measured at the beginning of the study and up to six months after the start of the study once a month. The average number of platelets in the three groups was ascending. Also, the difference between the mean numbers of platelets in the groups from the first month was significant (Table 2).

Table 2: The average platelet count and its changes in 6 months in three groups

Finally, by analyzing the data on the average number of platelets using repeated measure variance, the Greenhouse Grisdrone test with a FF value of 27.66 and a significant value of 0.0001 showed a significant change in the mean number of platelets in 3 groups. Also, the results of the comparison between the groups showed that the mean platelet score in the groups was significantly different with F=5.137 and 0.007, respectively (Table 3).

The Tukey post test showed that the mean platelet count in the second group was significantly higher than the first group (p=0.022) and the third group (p=0.031). On the other hand, the difference between the first and third groups was not significant (p=0.999) (Figure 2). 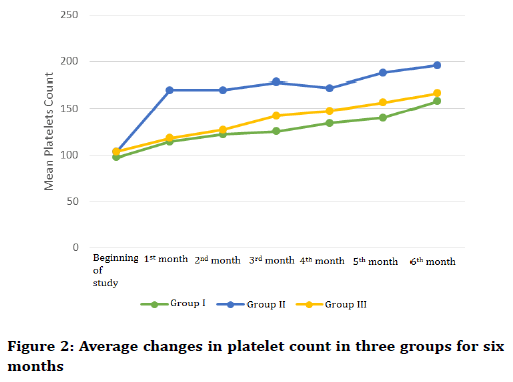 In this study, the response rate for treatment of patients with Helicobacter pylori eradication based on gender was evaluated separately. Accordingly, intra-group Wilkes lambda test with FF=755.7 and a significant level of 0.0001 showed that mean platelet increased significantly in men and women under eradication regimen. On the other hand, the Wilkes Lambda test showed a significant difference between the two groups (p=0.982) and p=0.451.

In this clinical trial, the aim of this study was to evaluate the effect of Helicobacter pylori eradication on platelet count in adult patients with immunologic thrombocytopenic purpura (ITP) on 115 patients with ITP and follow up monthly for six months. This study showed that the average platelet count in all three groups increased significantly during the six months follow-up. However, increased platelet count in the ITP group and treated with Helicobacter pylori eradication was significantly higher than in the other two groups. And this increase did not differ significantly between the sexes and the different age groups. The results of this study are consistent with the results of some researchers. In the study of Emilia et al. [8], the eradication of Helicobacter pylori in 95 patients with chronic prednisolone-resistant ITP indicated that eradication of Helicobacter pylori in patients with chronic ITP and resistant to common treatments, 46% of them respond favorably, and the number of platelets in the natural range increases for a long time. These results are in line with our research results. However, in this study, patients who are resistant to treatment entered the study However, in our study, there was no condition for drug resistance and different treatment regimens were introduced into the study.

The results of the study by Jackson et al. [9], Tag et al. [10], Gasbarrini et al. [11], Stasi et al. [12] and this research were similar and consistent with the results of these studies. In all cases, the eradication of Helicobacter pylori resulted in an increase in the number of platelets and continued persistence.

However, a limited number of studies have not shown this correlation coefficient. As Michel et al. [14] in the United States examined 74 patients with ITP, 15 of whom received anti-Helicobacter therapy, after three months of follow-up, doubling the number of platelets in only one of them, it turned out.

Also, in a study by Jarque et al. [15] in Spain, Helicobacter pylori eradication was performed in 23 patients. The platelet count did not change significantly after eradication.

There are many hypotheses about the mechanism for the creation of ITP due to Helicobacter pylori infection. Helicobacter pylori have viral factors such as vacA and cagA genes. Specific antibodies to cagA have a cross-over effect on the plate, as these antibodies are due to the similarity of CagA to antibodies platelet surface genes are attached to the cell, resulting in cell lysis. Another suggested mechanism is that following the colonization of Helicobacter pylori in the stomach, the host immune system during reactions that led to the emergence of its own B-1 reactive cells, followed by a decrease in the levels of FCγIIB receptors and, consequently, an increase in the intensity of phagocytosis monocytes [6,16-18]

It also seems that self-immunity may play an important role in the damage of the gastric mucosa by Helicobacter pylori through the release of cytokines and the imitation of the antigen extracted from epithelial cells. Several studies have shown that cytokines such as IL-8 [19,20] TNF-alpha, interferon gamma [21] play a major role in Helicobacter pylori gastritis. These cytokines may stimulate macrophages and neutrophils as inflammatory mediators in the gastric wall.

And similar mechanisms may lead to stimulation of the immune response in patients with ITP. Therefore, it seems logical that Helicobacter pylori eradication will reduce the amount of immune system stimulation and thus increase platelet count.

Some studies have shown that Helicobacter infection with the mechanism of disturbing the balance between th1 and th2 leads to an increase in immune response and a reduction in the number of platelets [22-26]. Recently, a new subgroup of T helper CD4+ cells has been identified, characterized. Significantly, interleukin production is 17 and an important contribution to the induction of autoimmune diseases. It is reasonable to conclude that the eradication of Helicobacter pylori has reduced the amount of immune stimulation, resulting in platelet count [27].

This treatment as a non-immunosuppression method can be a good choice for at least a few patients with ITP. However, wider clinical trials with longer follow-up periods are necessary to explain its possible mechanism.

In this study, the response rate to Helicobacter pylori eradication was evaluated separately on the basis of gender and age, which indicated that there was no significant difference in the mean number of platelets between the two sexes and different age groups.

The authors declared no potential conflicts of interests with respect to the authorship and/or publication of this paper.