This was a two-year prospective research that looked at the Eustachian tube patency and surgical prognosis in individuals with Chronic Suppurative Otitis Media (tubo tympanic type). This is done to evaluate the surgical result of CSOM in both normal and dysfunctional Eustachian tube function, as well as to view the end result of myringoplasty compares to Eustachian tube function in CSOM. Tympanogram and forced inflation test were used to evaluate the ETF. Patients are divided into two groups based on their ear findings: Group 1: A successful graft will be one that has strong middle ear function. Group-2: Graft rejection or perforation as a result of otitis media will be classified as failure. The data was tabulated using the Chi-square test and the Fisher Exact Test. The statistical significance level was set at (P=0.05). The findings were analysed using SPSS version 17 and Microsoft Excel 2007.

Tympanometry is a test that determines how well the tympanic membrane, middle ear, and Eustachian tube are functioning. Middle ear effusion and negative middle ear pressure are consistently and objectively detected using this method. Some asymptomatic youngsters, on the other hand, may feel an increase in negative pressure. As a result, a substantially negative resting pressure implies Eustachian tube blockage, but a standard Tympanogram does not rule out the possibility of Eustachian tube malfunction. In situations with Patulous Eustachian tube dysfunction, a typical Tympanogram might be produced (Figure 1). 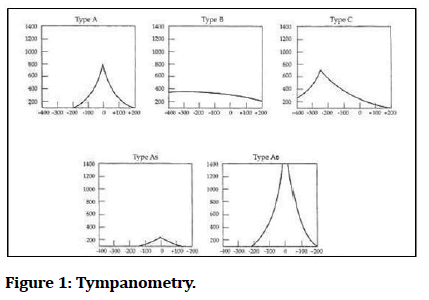 The pump-manometer device is used to assess Eustachian tube function if the Tympanic membrane is not intact. The Eustachian tube's opening pressure should be between +400 and +600mm H20 (Figure 2). The Toynbee test is performed to see if the eustachian tube is open or not. A positive test is the generation of negative pressure after swallowing with closed nostrils. Pneumaticotoscopy or a Tympanogram can be used to determine if the Tympanic membrane is intact before and after the surgery.

When the Tympanic membrane isn't intact, a manometer's impedance bridge can be used to complete the test.

Siemens model SD 30 tympanometer was utilised for the modified inflation-deflation test. With virtually every swallow, the typical Eustachian tube opens, and a negative or positive pressure delivered to the middle ear is gradually lowered until equalisation is achieved.

The tube with a hereditary, anatomical, or pathological defect impacting its normal function does not experience this normal decrease. In such situations, the drop in pressure finally reaches a point where additional swallowing has no effect on the pressure.

At most, the measurement can last no more than 4 minutes (240 seconds). Patients were scheduled for myringoplasty based on the status of their middle ear after an examination of Eustachian tube activity. For one week, antibiotics, analgesics, antihistamines, and multivitamins were given. On the seventh day following surgery, the sutures were removed.

Based on post-operative ear evaluations, patients were split into two groups.

A healed graft with robust middle ear work is a good result.

Graft failure or perforation owing to Otitis media during follow-up is defined as failure. 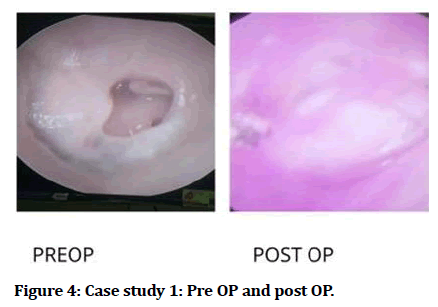 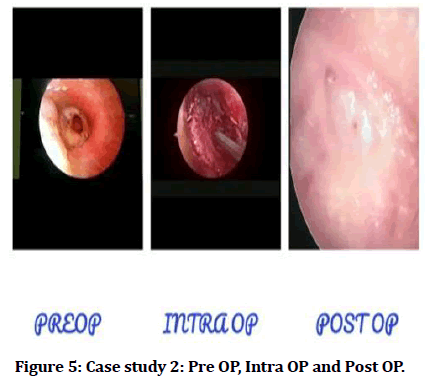 Internally, data from 100 randomly selected participants was compared, collated, analysed, and interpreted using descriptive and inferential statistics to meet the study's stated goals. The graft success and failure rates are represented in the Table 1 and Figure 6. 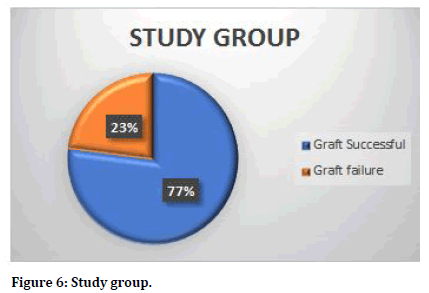 The goal of this study is to assess the relevance of ETF in surgical outcome in 100 patients with CSOM (tubotympanic-safe type) inactive stage.

The history, clinical examination, and investigations were all thoroughly examined in each instance.

All patients were treated surgically and medically, and all cases were followed up on.

A proforma was used to collect clinical data, and the observations were analysed using the master chart.

The clinical association between age and post-operative graft status is depicted in the table and bar chart above (Table 2 and Figure 7). 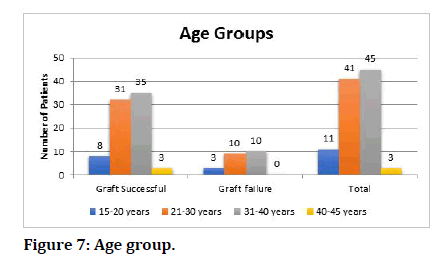 The Table 3 and Figure 8 show the link between gender and post-operative graft status. 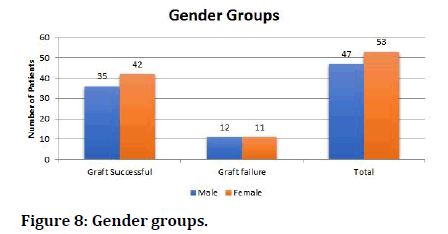 The Table 4 and pie chart (Figure 9) show the frequency of pneumatisation of the mastoid air cell system in our research group. 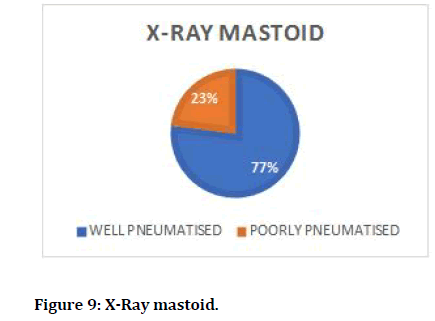 The frequency of Eustachian tube activity as measured by Tympanometry in the sample group is shown in the Table 5 and pie chart (Figure 10). 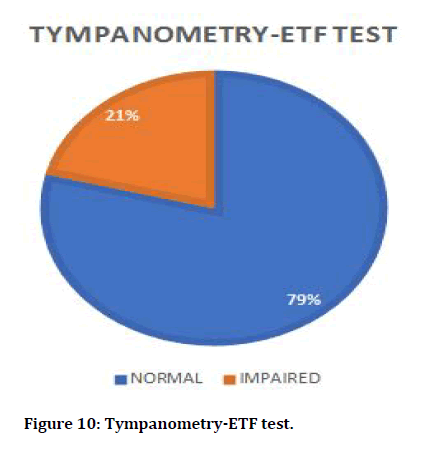 The frequency of post-operative graft status in our sample group is represented in the Table 6 and pie chart (Figure 11). 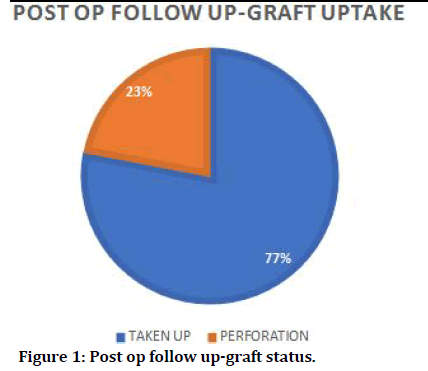 The association between Eustachian tube function and post-operative graft status is depicted in the Table 7 and bar chart (Figure 12).

Tympanometry is used to measure ETF in this study. The tympanometric tests indicated that 79 patients out of 100 had normal Eustachian tube function, 2 patients (2.53%) had graft failure, 77 patients (97.47%) had effective graft uptake, and 21 patients (100%) had perforation with significant impairment of Eustachian tube function. The Eustachian tube must work properly in order to keep the middle ear pressure at the same level as the ambient air pressure. This, in turn, is necessary for the middle ear's impedence matching function to work.The impedence audiometer is a more therapeutically reasonable and relevant technique of evaluating ET function because it examines the physiological function of ET, which is more significant to the clinician than just assessing the anatomical patency of the tube, which is attainable with most other methods. Tubal function must be adequate for reconstructive middle ear surgery to be successful.

A follow-up was done one month and three months following surgery. After surgery, patients are examined with otoscopy and otoendoscopy. A research in 2012 that found a 100 percent success rate in patients with normal ETF. Impedance audiometry to assess ETF before surgery in 1979 and found that conventional ETF had a success rate of 95%.

Based on ear results, patients were classified into two groups:

A healed graft was identified as a successful outcome.

Graft failure or perforation was described as failures [11-15].

The eustachian tube is crucial to tympanoplasty success because it is an essential component of normal middle ear function. The following important findings were drawn from outcome comparisons (graft success versus graft failure) following myringoplasty in both normal functioning Eustachian tube and Dysfunction Eustachian tube. The tympanometry-ETF test is a useful tool for determining the functional state of the Eustachian tube, and it appears to have a direct impact on the degree of post-operative graft uptake.