Radiation is a process, which is proves to affect many parts of the body. the extent of damage can only be ascertained only by knowing the absorbed level of radiation. These radiations can cause tissue damage, induce chemical changes also cause molecular damage. This biological damage is evident at much later stages. The cells when exposed to radiation causes oxidative stress which induces the cells to increase the antioxidant levels [1-2]. An antioxidant is a molecule which will donate an electron a damaging free radical and neutralize it. To ensure the level of radiation received by radiation professionals is within acceptable limits, the Maximum permissible dose (MPD) is used as the standard [3]. Hence this study is to analyze the oxidative stress status in radiology unit workers who are exposed to persistent low dose ionizing radiation. 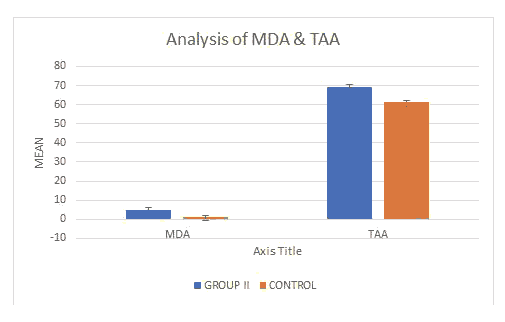 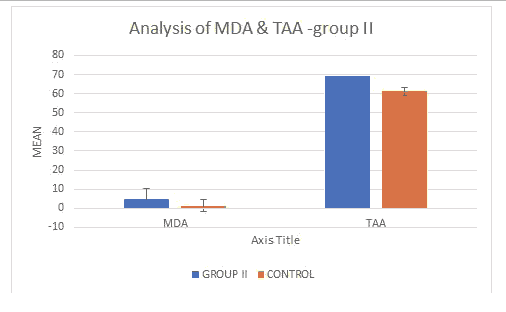 In the present study, a slight increase in MDA levels was noted in radiographers exposed to ionising radiation for a period of 7 to 14 years as compared to those exposed for less than 7 years. This indicates the presence of an additive dose as explained by linear no threshold model (lnt). generally there will be a balance between free radicals and antioxidants but this balance is disturbed in individual exposed in radiology units [4]. From the study its evident that slight decrease in antioxidant level in workers exposed for 7 to 14 years as compared to workers exposed to less than 7 years. This could be the result of reduced antioxidant defense activity as the antioxidants are used up to combat oxidative stress occurring over prolonged periods. This ultimately leads to an imbalance in oxidant and antioxidant status [5].